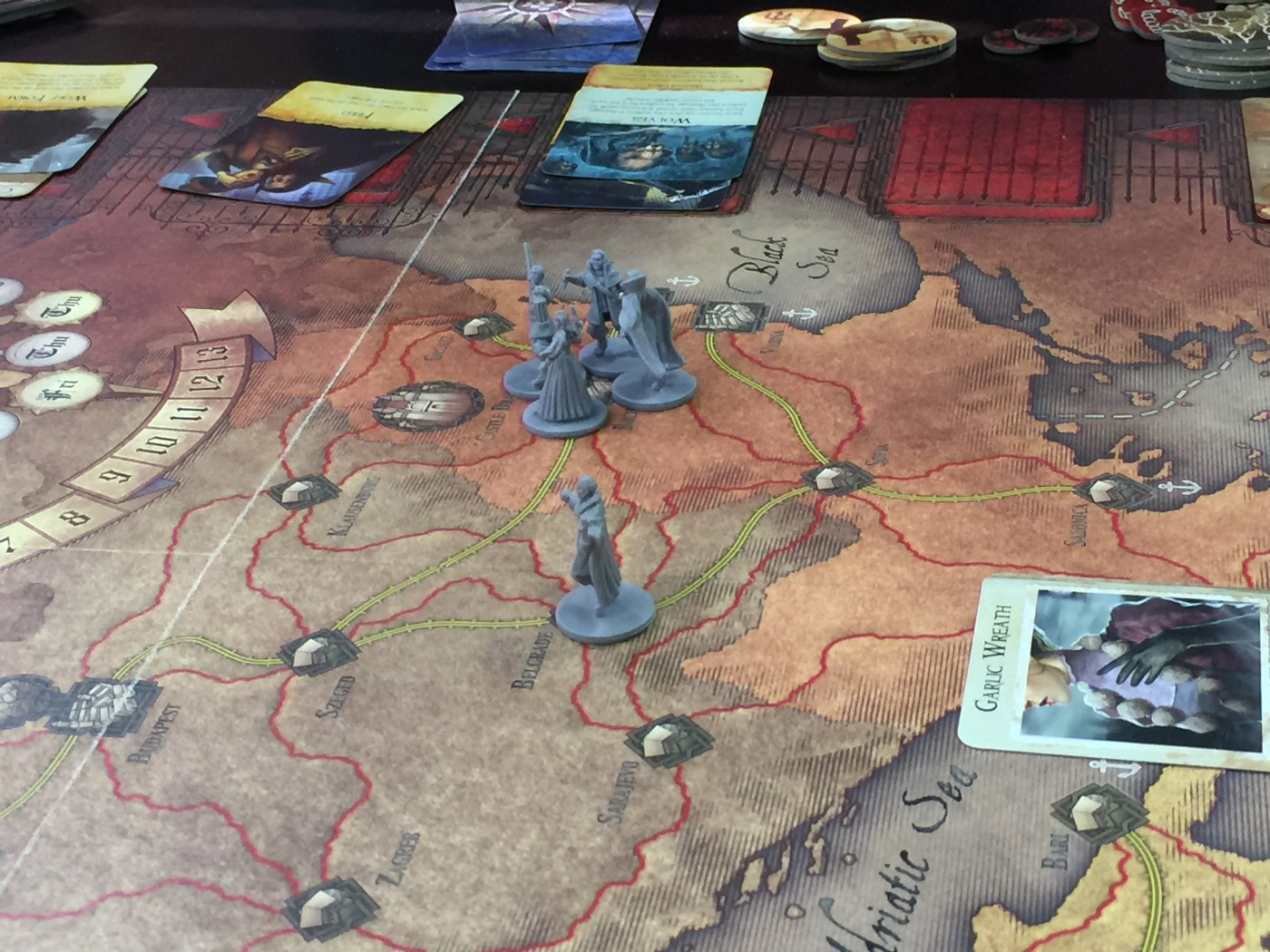 Sometime, somewhere, someone introduced you to your first cooperative game. (By all measurements on the Geek, it was probably Pandemic, right?) You taught it to your friends and family, and everybody’s happy. You and your fellow scientists have eradicated all of the viruses and saved the planet ten times in a row.

Here in Louisiana, we’re never satisfied with anything boring or bland.  We like to SPICE IT UP.  So for your next game night, grab a copy of Fury of Dracula (3rd Edition).  This is a 2015 release from Fantasy Flight, designed by Frank Brooks from design elements from Stephen Hand and Kevin Wilson.

This is a cooperative variant, where up to four players play vampire hunters against one player, who is cast as Count Dracula. Over a period of a few weeks, the hunters desperately search for the Count, who spreads rumors, minions, terror and combat all throughout a gorgeous map of Europe.

This game is a stunner. The artwork on the board captures the time period and yet feels foreboding. The plastic minis are good representations of all the characters (but scream for a good paint job). The cards and player aids are all top notch, as we have come to expect from FFG.

Game play starts slow as each side builds their arsenal of weapons and favorable events. It bears some resemblance to any adventure game minus the tile laying. Dracula is hidden from view (unless players locate him through coincidence, cards, or special powers.) And each mechanic in the game gives you the hunter the sense that you are on a vampire chase. (I have yet to play the big baddie, but it looks like the Count’s mechanics all fit his persona with lots of shape shifting, mesmorizing, and tuned up fangs.)

Why is this spicier than Pandemic?

First, Pandemic can suffer from the quarterback / alpha gamer syndrome, where one player basically directs the action for all of the other players.  Fury of Dracula sends players all over the board with each a special power that requires the use of the games actions in a different way. There appears to be many ways for the hunters to track-and-attack the vampire, so there is less likely the chance that one person has the “best” strategy on each move. Obviously, the game is cooperative, so you will experience lots of discussion and consensus building in the strategy, but each player is free to take their own route to the team victory.

Second, while there are a lot of thematic elements in Pandemic that contribute to the game experience, in the end it does kind of feel like you are playing an elaborate puzzle. Not so in Fury of Dracula, and I think it is partly because of the way the mechanics of looking for the vampire tie back to the theme, but even more so, it is because the combat system is better than just automatically overwhelming a virus or two.  In Fury, players build a “mini deck” of powers including attacks, defenses and special actions, that must be played tactically against the vampire and his minions. Let me tell you, the first time you corner the vampire (or better still, wait until you reach a battle that  you just know is going to be the deciding one), you will feel tension and you will sweat out the details of the multiple actions staring at you from your hand. (Yes, I know that the combat is short, only six rounds, and that it essentially comes down to a rock-paper-scissors type of resolution, but it fits the theme perfectly.)

The downside? I can’t say I am happy with the rule book. There appears to be a few errors in the printing, and some of the terms are either vague or used incorrectly (IMHO). We had to go back to the rule book frequently, and frankly did not always find the answer we needed.  And this game is not for everyone, not even likely for my own group. We play lots of shorter, one hour based games. Fury’s publisher states the game takes 2-3 hours, and that is about what you should expect especially for your first game (which in truth may take even longer as you pore into the rule book.)

But don’t let a couple of inconsistently written rules stop you from playing. Just pop a few cracklins in your mouth, swig some Abita Root Beer, and tell yourself and your game buddies that the thrill of the first game is in PLAYING the game and experiencing the chase (or hiding from the hunters!)  Fury of the Dracula is big, it is epic, it has mechanics that move the theme forward, and should be on everybody’s “must play” list. I give it four out of five cayenne peppers!