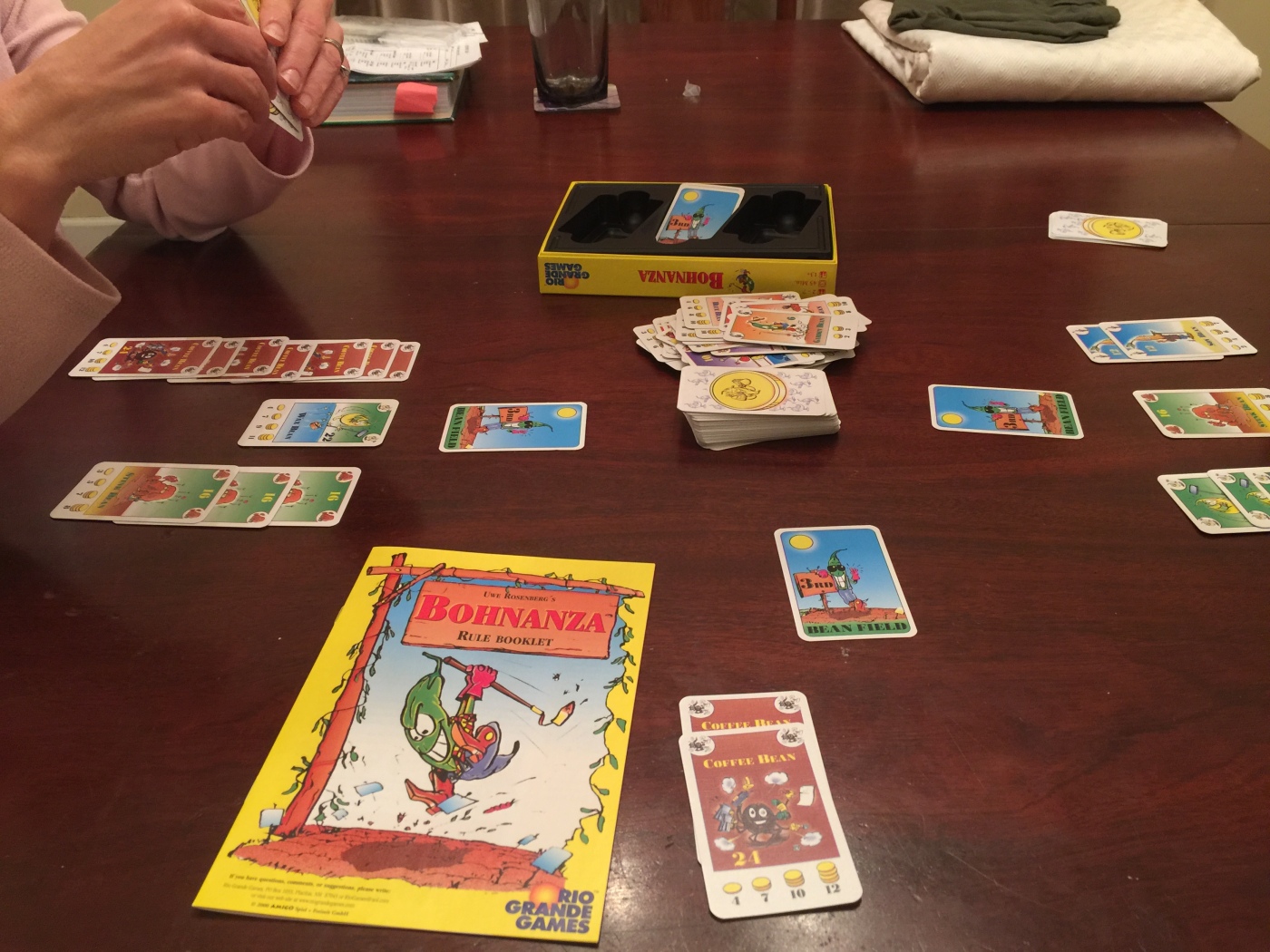 Cajuns love card games. We play Hearts, Spades, and of course our own Cajun games, Bouree’ and Battaille (the former for adults, and the latter your basic War or Battle card game for kids).

So it should come as no suprise that any good Board Game Gumbo is spiced with a heapin’ helpin’ of card games.

Once we mastered the Art Of Battaille, we moved right to the game of Pit. This is the classic game of trading first published by Parker Brothers way back in 1904. Players are dealt a hand of cards with commodity symbols on them, and then try to “corner” the market in that commodity by trading unwanted crops to the other players.

If we have played Pit one time, we have played it hundreds. Traveling from Louisiana to Quebec or to Yellowstone on long summer vacations, we whiled away the hours in the back of the  camper by playing round after round. We even started playing our own house rules — the inevitable “quiet” rule, where you had to hold up fingers to trade the commodity cards with other players — or even a version where you had to knock on the table to indiciate the number of cards intended for trade.

Pit was a great game, but it suffers from limited mechanics and appeal. So what do you do when your game group has had its fill of collecting and trading games like Pit?

Why not spice up your game night with a copy of Bohnanza?

Designed by famed German designer, Uwe Rosenber, who brought us Agricola and Caverna to name just two of his most famous farming games, this is Pit served up with fun, frivolity, and much spicier trading. It is simple to teach, plays in less than an hour, and at least in the version I bought from Rio Grande Games, plays up to seven (7) players.

The gameplay is simple, even for kids or novice gamers, making it not only a good gateway game, but an excellent next step after introducing other trading games. Players win by collecting valuable sets of “beans”, cards with bean caricatures on them of varying values.  The scoring depends upon the rarity of the beans in the deck.  Players have only two fields in front of them at first, which are needed to “plant” and then later “harvest” the bean cards that you draw.

Of course, the other way to collect the beans you need to complete your sets is to trade  with other players.  And that’s where the wheelin’ and dealin’ fun begins. Each round, the active player will be solicited by the other players hoping to trade for the cards that have come out, or get rid of cards in their hand that do not fit with their bean strategy. It may take some convincing, or even some pretty crafty dealing, but eventually you can get the cards you need to harvest your field.

The game consists of three rounds, and players will reshuffle the deck two times. Just remind new players who stare warily at the extra sized deck, that it will be whittled down by all of the harvested beans, many of which do not go back in the deck but instead are used as scoring tokens.

The components are pretty standard: a large set of cards  with humorous depictions of beans in various poses related to their names: 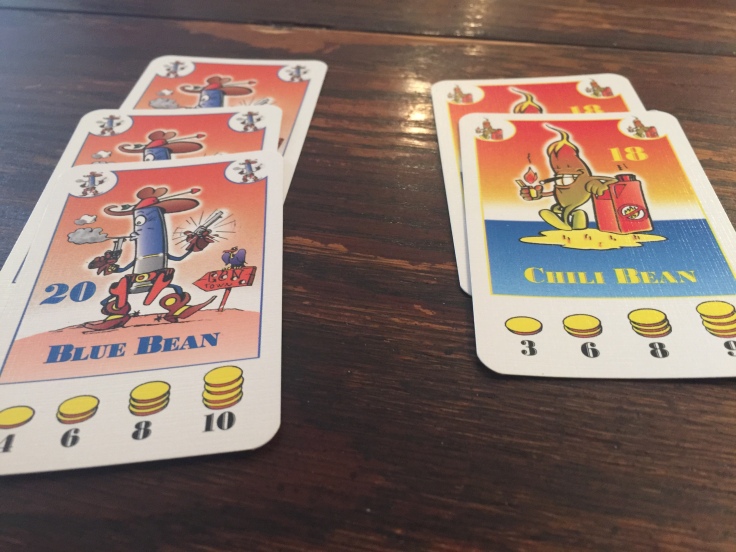 The box has a nice plastic insert that holds the cards, but caution — the insert will not prevent the cards from spilling over the insert if you turn it on its side. The cards include enough beans to scale the game from 3 to 7 players.

What makes this game spicier than Pit or other trading games? It takes some strategy to manipulate the two fields players start with to ensure all of the beans are planted (eventually, players can purchase a third bean field, which greatly helps).  It also takes skillful negotiations to get that last bean of the set, or to prevent other players from upgrading their field’s harvest. A little card counting ability never hurts, either.

In sum, Bohnanza is an awesome next step up from Pit, and should be in every gamer’s collection. Spice up your next game night with a great opening game while waiting for your group to arrive! I give it three out of five cayenne peppers!

One thought on “Spice it up! with Bohnanza”