One scout troop. Twelve computers linked to a home brew network. 12 straight hours of gaming, with Age of Empires/Mythology on every screen!

Usually, the adults and Eagle alums play board games like Kingdom Builder or Betrayal at House on the Hill or King of Tokyo or a hundred other board games. Most of the younger scouts gravitate toward the Minecraft servers. But, I will admit that a big highlight has been setting up multi player contests of RTS games like Age of Empires.

As much as I like board games, I always get a special smile when I see the guys on the big AoE / AoM server.

My sons and I have had many, many nights battling each other in those classic RTS games. Sure, Civ gets a lot of the awards and crew, but to me AoE and AoM just seem more fun. (And faster, too!). I am always on the look out for a board game that can duplicate that classic feeling of searching the landscape for resources, building your little settlement into a powerful civilization and declaring victory.

So, there I was at Gen Con 2016, at the Portal booth for probably the third time, when I swept my eyes over Imperial Settlers, Ignacy Trezewiczek‘s big seller the last two years. Although Imperial Settlers has some great expansions, tons of good pub, and a rabid following, I have never played the game. 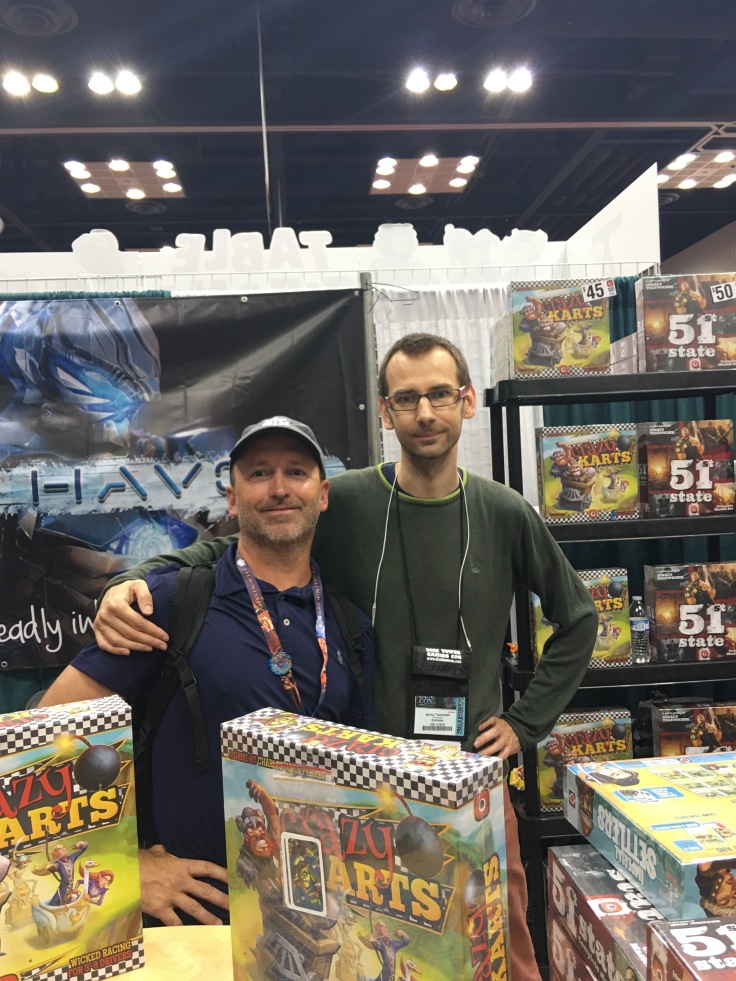 I have been looking for a good game to get my 16 year old back into board gaming. He is at the age where he thinks bytes are more interesting than bits, and CPUs are more impressive than cardboard. Oh, he still loves Viticulture (and he really enjoyed playing Cry Havoc recently) but he would rather jump on his favorite MMO any night.

So, I asked Ignacy to give us his best 30 second pitch — why should we buy Imperial Settlers.? He took one look at my son, Jack, and asked if Jack had ever played a computer civ type game. “Sure,” was the reply, and Jack immediately mentioned Age of Mythology. Ignacy’s eyes lit up, and he proceeded to describe his game.

It is a card board version of your favorite civ games, said Ignacy. You will send scouts out, develop your civilization, add production and buildings, and even attack opponents if you want, he promised.

All of that made my heart sing, and my son eyes widened. We snapped it up right there. But is it enough to entice an RTS fan to put away the keyboard? (With a big thanks to @thediceyreview1 for the germination!)

Well, if your family game nights are getting bland or even nonexistent, and your family loves RTS civilization games like Age of Empires, then Spice it up! with Imperial Settlers. 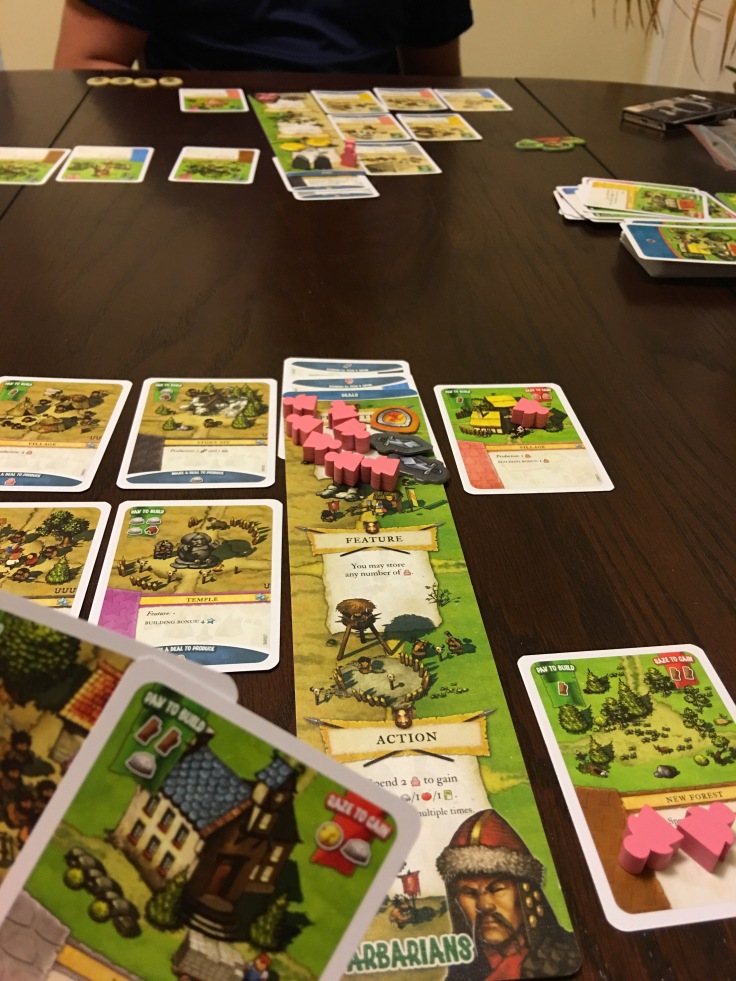 First, a little bit about the game. Imperial Settlers is essentially a civilization game, with a race for victory points lasting five rounds. Building cards, action cards and special featured cards which can all help you gain victory points all come in a common deck from which all players will draw.

But, the base game also comes with four factions (Romans, Barbarians, Egyptians and Japanese), each with a unique faction deck. 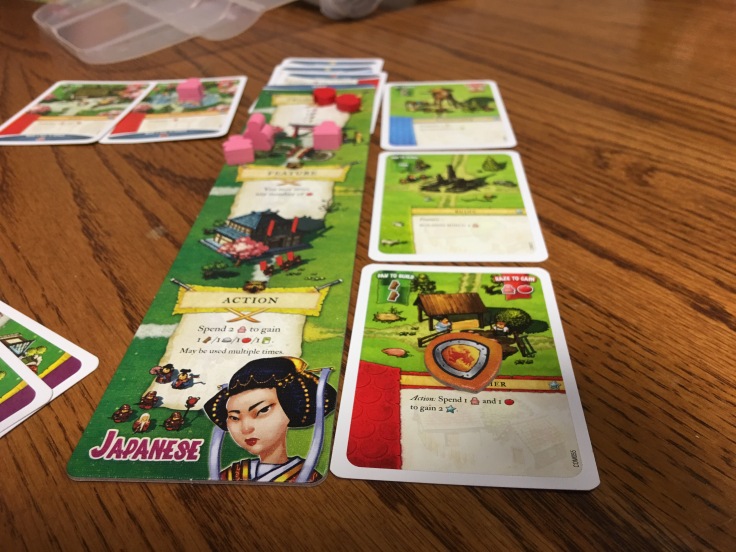 The players send their “scouts” out to look for more territory (in other words, draw faction and common deck cards) as the first part of the round. (Aside: we use the three card round robin drafting style now instead of the basic draw as it is quicker and more fun, plus it seems more thematic).

Next, the players “produce” resources from the buildings they have built and the trade deals they have made. Then, the players use their cards and resources (meeples, coins, fruit, wood and stone) to build buildings or take actions from the cards to produce effects like more production or more victory points.

The players take turns doing one action in round robin fashion until all players have passed their turn.  During those actions, the players can target their own common cards or even each other’s common cards using “raze” tokens (the little sword tokens shown below) which can help to generate resources or even slow an opponent down.

This helps keep the game from being a ‘solitaire’ contest of civ building, since you always have to watch out for the other player’s buildings. Knowing just the right card to raze (either in your hand or your opponent’s territory) is a big key to winning the game.

After five rounds, the bonus points from building your faction and common building cards are tallied, and a winning civilization is declared.

So why is this game spicier than Age of Empires or Age of Mythology computer games.?

First, well, it is a board game, right? Here at the Gumbo, we are all about analog cardboard treasures, rather than pixelated solo games (yes, I know AoE and AoM can be played multiplayer, but the vast experience is playing solo).

Second, I love the playing time. Ignacy has built an engine type game with only five rounds to play, so players with experience can knock out a good game in about 45-60 minutes. (Your mileage will vary depending upon experience and AP prone issues.) There is something delicious about playing a relatively quick game that has so much depth to it.

Third, I love the asynchronous play of each civilization. The factions play differently, and while luck is always a factor (this is a card drawing game, right?), luck can be mitigated with good strategy and recognition of the combo opportunities that each faction deck provides. 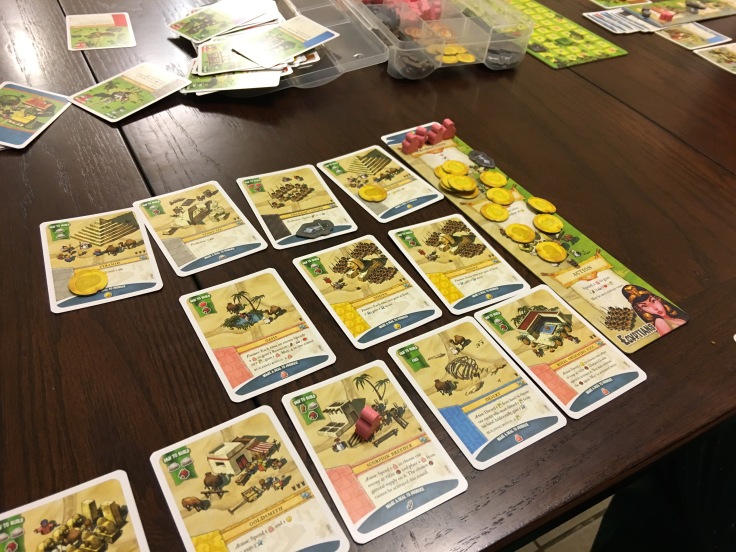 I have read on BGG many posts suggesting that one faction is better than the other, and that just tells me that Ignacy has done a good job with the fourth important factor, namely, balance.  In our early games, the Egyptians seem to be the strongest, but already the wheels are turning as to how the Romans and Barbs can get around the Egyptian money stronghold.

What about art and aesthetics? Here is where the game really shines. I love the artwork on the cards. Each tells a little story, and you can tell that someone really thought about the design of the player boards, the iconography and the placement of art on the cards. Really well done.  I have to point out one flaw — the type on the cards is way too small for comfortable reading. I would go with bigger type in the next printing, because it is noticeably too small.

I have not tried the solo option, but I will as I usually like learning about the depth of the game during solo play. I also have not had the opportunity to play the Japanese faction, but will update the blog when I do. We have had so much fun playing the first three factions, and we all feel like we are still scratching the surface on strategy with these three.

Portal Games has already put out at least one new faction (the Atlanteans) plus expansion cards for the factions and common cards (Why Can’t We Be Friends, 3 Is A Magic Number), with more on the way. So, if you are worried about the staying power of your game, there is always ways to spice it up.

We love this game! Just as I hoped, my son and his friends really latched onto this game. It goes on a short list of board games that feel enough like a video game to attract the attention of the video-obsessed teens. We agree that even after a half-dozen plays, there is still so much more to explore. Plus we have the expansion packs, the new factions, the Aztecs on the way…poo-yie, that’s a lot of game!

I give Imperial Settlers 5 out of 5 cayenne peppers, and congratulate Ignacy Trezewiczek for a tight, elegant civilization design. So next time you want to drag your teen off of the latest civ game he is playing on the computer, Spice it up! with Imperial Settlers.

One thought on “Spice it up! with Imperial Settlers”