It’s a special Halloween edition of The Gumbo! But first, a story….

A new tradition was born in the village of Mamou, a small village on the northern edge of the Acadian Prairie. The townspeople of the small village, along with their counterparts in the other three villages just across the prairie, aimed to be the village with the most Prestige. Maybe, just maybe, could the village and its lovely folk move up to being called a town under Napoleonic law?

And so, on All Hallows Eve, the village’s founders set out on a grand adventure to increase the prestige of the village: by traveling out to the Gulf of Mexico, by building a great cathedral, by creating beautiful meeting places for the village folk, and by increasing the production of resources enough to entice visitors to the village to fill up its weekly farmers market.

But there was a price to pay for their pride. The Grim Reaper came calling each year to claim new friends for himself from among the villagers who were the most noteworthy. Could each Village avoid his clutches?

Last night, at the biweekly Acadiana Arcana meet up group — affectionately known as Gumbo Game Night, the Krewe de Gumbo played as many Halloween themed games as we could get our hands on. 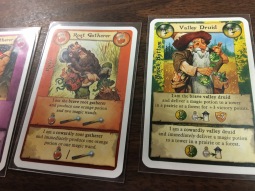 , sending witches all over the board to deliver potions to the towers. Cackles of laughter rang out each time a brave witch trumped a cowardly one.

Would Nosferatu finally overcome the brave heroes on this Halloween night? Fortunately, the hunters were well equipped for the vampire’s cunning moves, and vanquished the old evil.

But we were also looking for some out of the box type games, a game or two that would fit with our Halloween game night theme but also be a little different.

Does your group love action selection or dice pool games? Do you and your friends love watching your actions create an ever larger tableau of village buildings and action spaces? How about one with at least a tenuous connection to Halloween? Spice it up! with My Village! 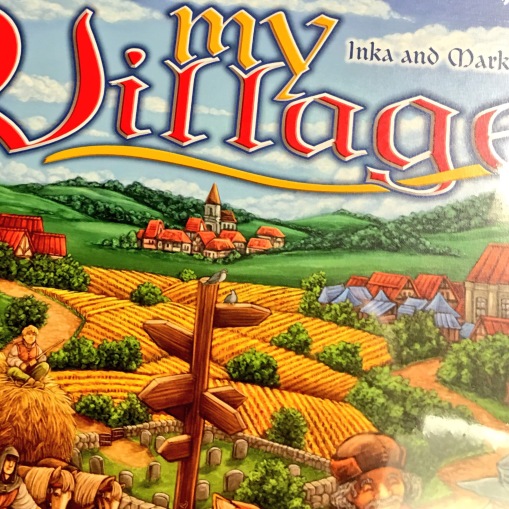 My Village  is the 2015 release from Stronghold Games designed by Markus Brand and Inka Brand, that is a dice based version of the games in their Village line. Players take on the role of village founders who set out to increase the “prestige” (i.e. victory points) of their village against up to three other village builders. Each village builds out all aspects of their little community, including church buildings, government areas, production, and even traveling a long and winding road out to the sea, all the while gathering prestige points (permanent victory points) and story points (temporary points that must be “banked” or converted into permanent victory points.)

The game does not have a set number of rounds, but instead ends after a set number of villages have passed into the great beyond.  And that’s where the Halloween theme, at least for me, comes in the strongest.  The dark foreboding figure of the grim reaper 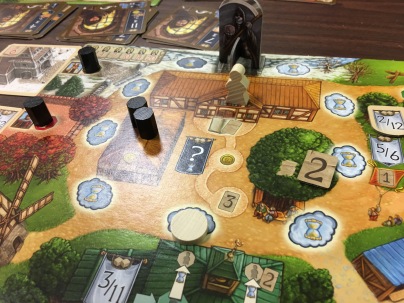 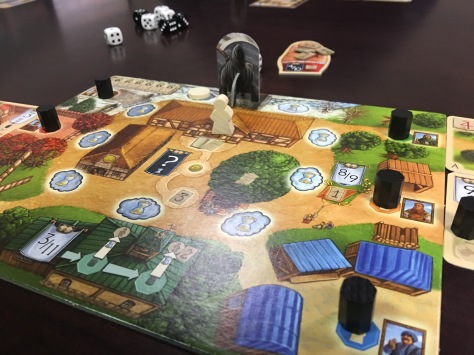 watches over your village, and waits for you to complete an entire circle on the time track. You move around the time track each time you take an action that requires time (which is essentially the biggest commodity in the game.)

Each time your village marker crosses the “bridge of death” (as we called it), the Grim Reaper tags along with your marker, reminding you that at the end of that turn, it will be time for your village to say goodbye to one of its town fathers or mothers.

Of course, the first of these villages will also earn your village story points, but until you train a new villager, you will be hampered by not being able to activate those areas that the villager once controlled.

My Village is a sandbox game. Although we have not explored all of the depths of the game yet, there does not appear to be any one correct way to score the most prestige points. 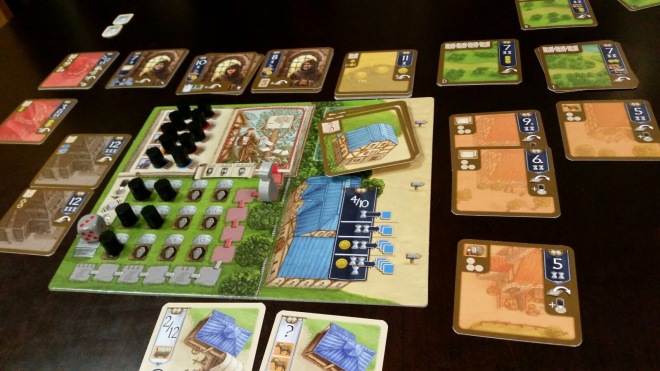 Maybe your village will specialize in adventuring out of the village toward the sea, and produce resources that helps you outfit those expeditions. Or, maybe your village will want the grandest monuments to church and state, giving you permanent and temporary bonuses to help you. Or maybe you fancy your village as the nexus point of trading in the valley, creating an effective engine for making resources and trading them to the local merchants. All of these are viable and can be mixed and matched, as I believe it takes being very good and efficient with multiple areas of the board to win. 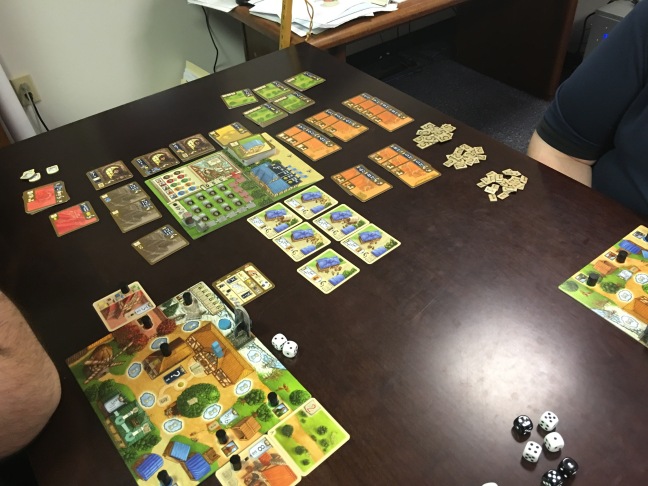 It is definitely a next step up from your normal work replacement for action selection type game. The game takes a fair length to set up and explain the different areas, but the game play itself is fairly intuitive. It really is a dice pool and card drafting game, where the first player rolls a handful of white and black dice to start each round. The white dice represent a combination of two dice that can be chosen without time penalty to activate the different cards and areas of the board. The black dice each represent numbers that can be used, but with a penalty of two time spaces for each die. 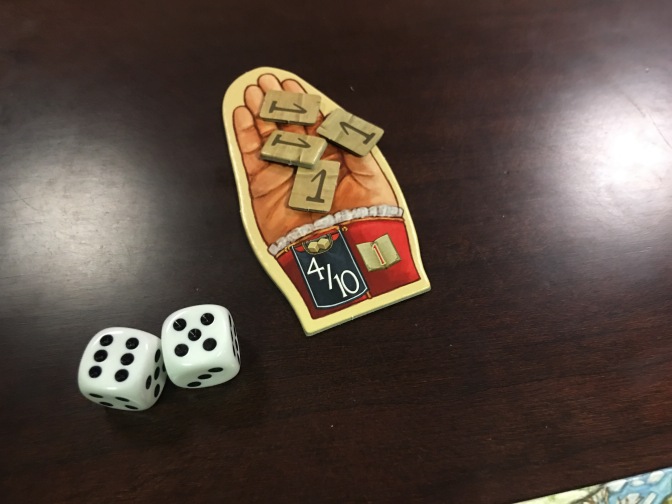 The fact that the dice pool is limited puts a premium on being first in the round. If you fall to last place in the turn order, instead of a nice set of a dozen dice to choose from, you may be limited to only one or two white dice, or even forbid having to choose both black dice for your value for this round, costing you four time.

Time is a precious commodity in this game. It pays to be efficient.  Every time the Grim Reaper comes calling, you lose one of your five villagers, and without them, you cannot take actions associated with that job.  For instance, once the Abbey villager passes, until you replace him by training another villager at the village schoolhouse, you can’t continue to build onto your church anymore. And every time a village joins the community ceremony, that player must roll the “rat die” (a beautiful grey-and-red dice) whose dice rolls puts you ever closer to the “plague space.”  The plague space is a diabolical special touch from the designers, because half of those non-banked story points just hanging around the story tree in your park go away if ever the rat maple reaches the problem space.

How is the production value? Stronghold, in partnership with Eggerspiele, really knocked it out of the park on this one. There is no scrimping here. The gray rat maple looks menacing but cute on the table. The dice are weighty with good movement, and the board itself is colorful but explains the actions very similar. The board is very well laid out and is beautiful to look at. The Grim Reaper little standees are a perfect representation of each player’s nemesis. I love the idea of using the black wooden “meeples” double for a lot of different things on the board: coins, villagers, and even resources.

If there are any downsides to the game, it is the fact that it can take a while to teach the game. The “cheat sheet” I printed out from the Geek itself was four pages long with dense type. The game itself is easy to understand — roll the dice pool, pick one set (or two sets if playing with two players) of dice for your actions, build your village, then check to see if anyone died — but there are a lot of special rules for each type of village building. Even after two or three plays, I was still diving into the cheat sheet to make sure we played the buildings correctly.

For that reason, My Village is not a game I would recommend for brand new gamers wanting to try worker placement/dice pool type games. There is a lot to maintain on the board, even though each turn is blissfully short, and finding the right combos is the key to being very efficient. But if your game group has lots of action selection / worker placement type games under your belt, then My Village will be a breeze for you to pick up. You owe it to your game group to give this one a try, especially on Halloween. It’s a great next step up. I’m a big fan of My Village, and can’t wait to bring it out to the table again. My (Christmas) Village, anyone?