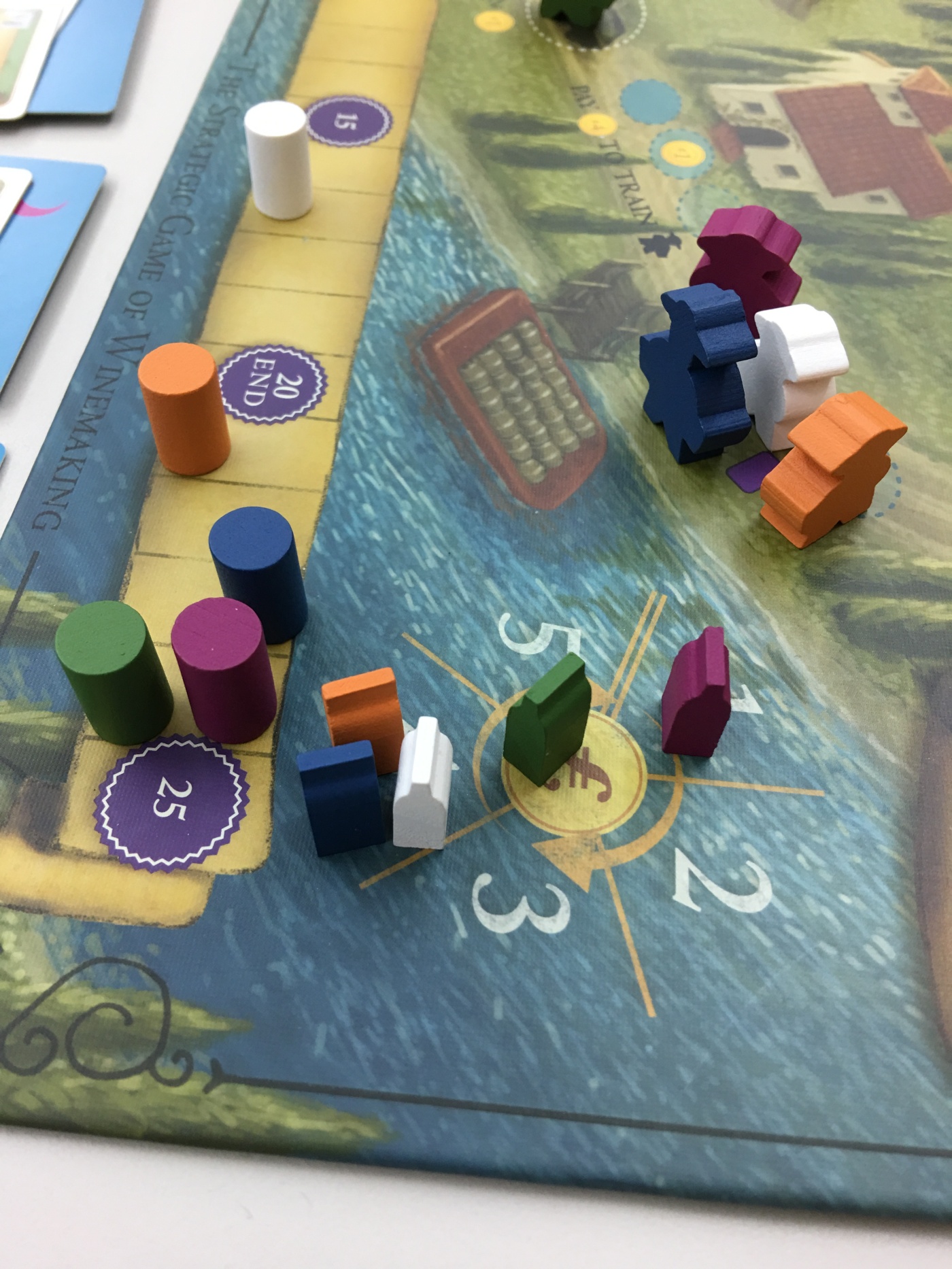 How many of you out there love playing games and want to play more than the once a week or once a month time frame that your current group plays? With BGG.Con in full swing this weekend, and two of the Krewe de Gumbo enjoying the juicy new games in DFW, Board Game Gumbo turned our eyes to find other groups that might be playing on this gorgeous weekend.  Hey, as my grand-mere used to say, “Les jeunes aiment courir les chemins” — young people like to “run the roads.”

And so, with my trusty sherpa, Phillip, along for the ride, we headed north along Interstate 49 to join up with the Cenla Tabletop Gamer’s Guild at their monthly game day at the invitation of Marshall and Wesley, two of the admins of the group. We brought along some new coins from  Viticulture Essential Edition and the expansions for Bottom of the 9th, along with a bunch of other games. (I figured that the group had a whole pile of games to play, but when you have a sherpa along, you can never be too careful.)

When we got there, Marshall was leading a large group playing Hero Realms. So, Phillip and I set up Bottom of the 9th, and begin playing. So for me and Phillip, it was batter’s up time.

Bottom of the 9th is such a quick playing, tense little duel that it is hard not to get caught up in the game. You don’t even need to be a baseball fan in my opinion, although it helps to know the rules.

Soon a group of gamers finished up the other card game, and came by to check out the game. That led,of course, to some epic duels between some of the new players from the Big League Support and Sentinels of the Ninth  expansions. The final game between Chester and Marshall came down to a couple of pitches, and one of the hitters hit a “big fly” three run homer to break the streak of the pitching team winning all of the other games.

We’ll hopefully be doing a Beignets and Board Game post about Bottom of the 9th, but suffice it to say, it is a perfect game to bring out when you are waiting for other players to show up, or even if you want to engage in round robin play. Just ask Kirk from the Krewe de Gumbo.

Next up, I headed over to a table playing one of my favorite programming games, Colt Express. Players compete as wild west outlaws in the midst of robbing a train — and each other — while avoiding the nasty marshall. The game was designed by Christophe Raimbult and published by Ludonaute. (Christophe is one of the nicest guys on Twitter and in board game podcasts so I was happy to see that Cenla had a copy. Wish I had brought my Stagecoaches and Horses expansion…)

What a game! We had a mix of new to the game players and some old outlaws, but the game teaches easily and hits the ground running.

It looked like we had one or two people pretty new to this type of table top gaming, and you could see their eyes light up at the 3D board and the colorful cards, scenery and meeples.

I love playing this game especially with new groups (it was a big hit at the board game room at Louisiana Comic Con, too.) I was glad the group had it, although my outlaw had a pretty tough time picking up loot. Wesley crushed us with the best score I have ever seen in Colt Express, when he ended up with over $3500+ (both suitcases and the $1000 bonus).

I was really hoping to try out the new metal coins that I got from Jamey Stegmaier and Stonemaier Games. These were specifically done for Viticulture (they have the lira symbol and cool grape theming), but can be used for just about any game that requires money. That little clinkety clinkety sound that metal money makes when you toss it over the board is great!

Luckily, we found five players willing to try. Phillip and Marshall had played before, but the other two had not. I have played the game over a dozen times, so I have a patter pretty well built in for teaching the game.

I start with telling gamers it is a competitive game about making wine (ed. note: cough, cough says Phillip), and that we will be using our workers to help us plant grapes, harvest the grapes, make wine and sell wine over two different seasons of the year. I think by understanding the four step process, people can grok the board better. By year three, the two new players had grasped all of the concepts of the game and played very well.

I pulled out a win with the lira tie-breaker using the Tasting Room + Blue Cards strategy. It was a little more stressful than I thought, and frankly I like making wine better, but I have to admit that it was fun zigging while everyone else was zagging.

Next up, the group had a copy of Black Fleet, a great little take-that-while-you-pick-up-and-deliver game from Space Cowboys. This is a game that Dustin and I have been trying to get to the table for months — heck, I think since we started Board Game Gumbo! — but usually he and I are teaching other games at game night and he has not been able to bring it out.

I can see why Dustin likes this game! The production is so colorful and fun that it really draws eyeballs to the table. The game is just light enough that you really don’t have to think about your turn until the person right before you plays (especially since the board dynamics change so drastically on each player’s turn).  Players command pirate ships and merchants (as well as the Royal Navy) trying to deliver bananas and other goods, while attacking other players.  There’s only two main ways of getting money, delivering goods and attacking ships, so since the attacking happens so frequently, when you are attacked, it seems a lot less threatening than it does on your typical Dudes on a Map game.

I really enjoyed this game, and it was a great break after the all the calculations and turn by turn stress in the latter part of Viticulture.  I would definitely play it again, although this time I lost in the tiebreaker to Phillip who had amassed a very large fortune that he conveniently Bradly’d away from my view. (Not really, I just miscalculated how much he could really earn in his last turn!)

We ended the night with a few quick games of Happy Salmon. (We were having so much funny that I forgot to take pictures.) By this time, the group meet was winding down, and we had a long trek back to Acadiana, so we said our good-byes.

So how was all of this successful? I think it goes back to some words of wisdom that I heard from a very warm and prolific board game media person. Suzanne (frequent contributor to the Dice Tower) was a guest of The Dukes of Dice back in Episode 44. She said (and I’m paraphrasing here) that extrovert board gamers have a responsibility to welcome new gamers to the fold and strike up conversations at the gaming table, so that all gamers (even those that may be a little introverted) can participate and have a good time. This was great advice that she gave to Alex with the Dukes on his first trip to Dice Tower Con in 2015, and it holds true today. I like meeting new people, so I made it a point when I got to this particular Meet Up to take her advice, introduce myself around, and try to play games at different tables.

But there were also some earlier steps that made it easier. First, the Cenla Group is a very open and inviting bunch of gaming enthusiasts. Joining their Meet Up group site was easy. That way, I had a copy of the calendar and could look at their monthly meetings. Then, engaging with some of the members on social and community sites like BGG and Twitter helped to bridge the gap. Marshall and I tweet pretty frequently, so it was easy to take the next step — inviting him and his crew over to Louisiana Comic Con’s board game room back in October. He spent the day with us playing all kinds of games (I think Imperial Settlers was a favorite).

By meeting him in person, it made it a lot easier when Phillip and I showed up at the game day. That way, I already knew one person by face (and had communicated with Wesley by Twitter). Since the group was very friendly, and obviously they share a love of hobby board games, it was an easy day of laughing, playing games, and telling stories. I really had a great time playing with this great group of gamers.

So if you are looking to game more, no matter how small your town may be, there are likely friendly game groups within an hour or two of your house. Use social media and community board game sites to reach out to these groups, and have some fun playing new and old games with new friends. And if you are ever in Central Louisiana on a Saturday, head over to the library and meet some great gamers.