Has it really been 17 years since  Carcassone stormed the board gaming world? By now, every game group in America has been exposed to the classic tile laying game. Likely, your group plays the original mixed in with any of the dozens of expansions that have come out.
(Side note: Did you know that even after all these years, the original two expansions, Traders & Builders and Inns & Cathedrals, are still the highest rated by BGG?)
If you are looking to introduce your family to the tile laying genre, or if your game group is finding regular Carcassonne a little bland, well then, let’s Spice it up! with Karuba!

OVERVIEW:
Karuba is a tile laying, racing game for two to four players published by HABA USA. It was released in 2015 and designed by Rudiger Dorn,  with artwork by Claus Stephen.  It was nominated for the Spiel de Jahres in 2016, but lost to the convention juggernaut that was Code Names.
The set up of the game is unique, but easy to teach. Players each have identical boards depicting a mysterious jungle bordered by a beach (reminiscent of the opening scenes in Indiana Jones). Each player gets the opportunity to set the adventure for all players by placing one adventurer and one like colored temple.
The object of the game is to use the tiles depicting trails in the jungle to connect all four of your adventurers with all four temples faster than the other players, collecting gold nuggets and crystals for extra points along the way.
Collect more points than the other player — before the players run out of tiles or one player lands all of his adventurers in their respective temples — to be the winning adventurer. 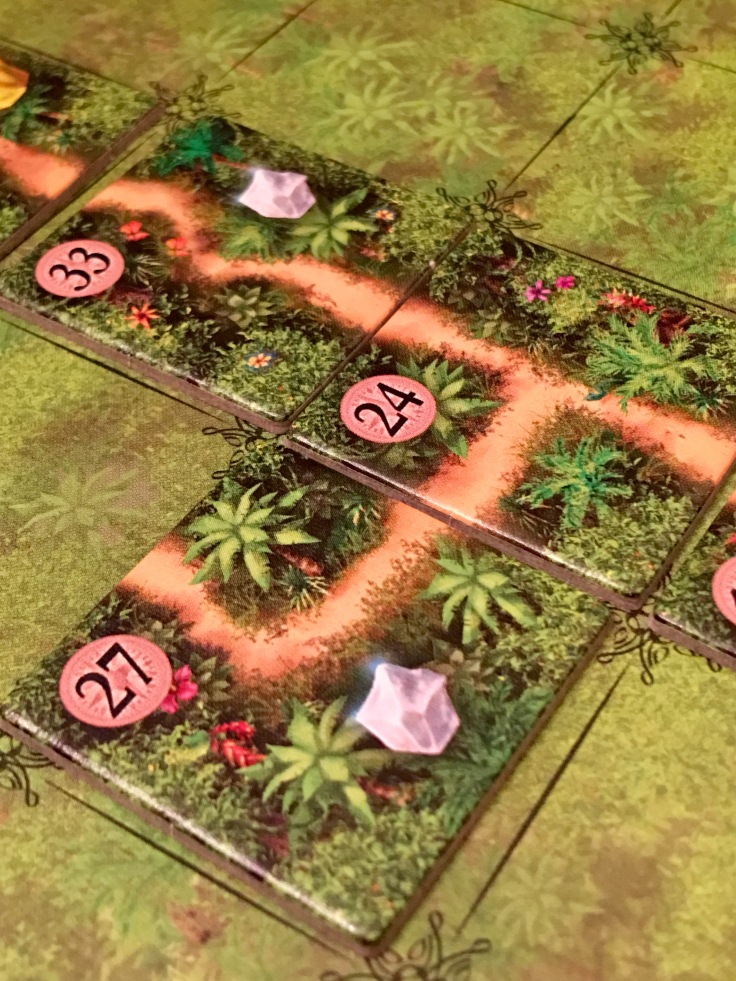 INNOVATIONS:
Getting your family and friends to play this game is easy if they are familiar with Carcassonne. The designer has taken the very player friendly mechanic of laying tiles to build routes and castles, and twisted it into a racing format. Plus, the board is so much smaller (since you are playing on just your player board instead of the entire Carcassonne lay out), so the connections make sense even to first time gamers.
The racing aspect is not that unique, except for the fact that adventurers have to have a way to get off of the beach, and can’t cross or pass each other up. This makes for some interesting decisions, and may even lead to players creating side routes just to park an adventurer or two while running another to the temple.
I love the fact that the players are in control of setting up the objectives. Other tile laying games like Castles of Mad King Ludwig have replayability because of the changing objective tiles, but those are randomly generated. In this game, each player has a hand in creating at least one (and perhaps more, depending on player count) adventurer/temple set up. 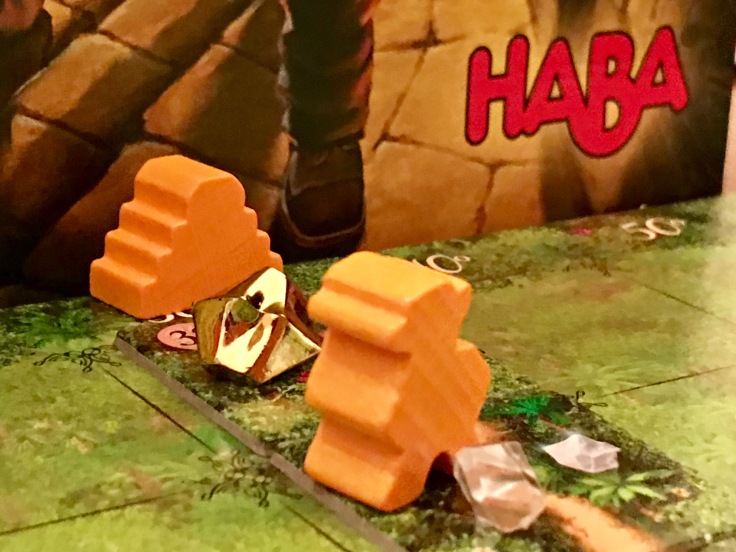 COMPONENTS:
Haba is known for its gorgeous productions for kids games, so it should come as no surprise that the company went all out for this foray into gamer games. The player boards are thick and playable (I am looking at you Terraforming Mars), and the adventurers and temples are nicely designed and colored wooden bits. The location tiles are sturdy, and even have little pictures of jungle fauna and flora on them. The crystals and gold look like little diamonds and nuggets. And the treasure cards are all unique. In short, this is a game with excellent production.

GAMEPLAY:
The gameplay is simple. Players can only take one of two actions: (a) place a tile on their player board (and a crystal or nugget if one is shown on that tile); or (b) discard that tile to move one adventure up to a number of spaces. The amount of movement has just a few easy rules — adventurers can move the same number of spaces as the amount of exits shown on the discarded tiles, and they can’t occupy or cross over the space of another adventurer.
As you can see, these are the kind of basic rules that allow a broad spectrum of players to easily jump in and start playing. But, just like any classic Euro, there is so much depth in that simple starting play.

Do you immediately connect one adventurer to a temple as quickly as you can so that you can be the first (and claim the highest treasure?) Or do you try to build a framework of trails that allows multiple adventurers to make their way on shared routes (taking care not to create traffic jams?) Do you build your routes while keeping an eye on the other boards, and then discard a few tiles to ‘snipe’ a treasure right before another player? Or do you focus on getting as many gold nuggets and crystals to supplement the mid level treasures you will probably get?
All of these are valid strategies, and make for very tense decisions especially in the last third of the game.

FINAL THOUGHTS:
Karuba had been on my radar, because there was a lot of buzz about it following the SdJ nomination. Haba’s reputation as the top producer of children’s games had me thinking that this would be “just a kid’s game.” The nomination changed that, and I am glad I sought out a copy.
This is not just a children’s game. This is a game that we can bring out with new gamers, old and young alike, as an introduction to our hobby. But, I have brought this game to the table at two game nights, and had the gamers up and running in a minute and diving into all of the different strategies.
Overall, the excellent production, easy rules to teach, replay ability due to the different adventurer/temple set up, and interesting decisions all add up to a first class experience. Plus, the game plays in less than hour, which really hits a home run in this category. While it may look like Carcassonne Solitaire at first glance, it is most certainly not solitaire. You must keep an eye out for each other player’s adventurers to decide just when you should start throwing away good tiles so that you can steal the five point treasure right before your mom does (did I say that aloud?).
If you need a great two to four player game, with a good racing element and some light hearted tension building in the back end of the game, head on down to your friendly local game store and pick up a copy of Karuba.
Until next time, laissez les bon temps rouler!
–B.J.

4 thoughts on “Spice it up! with Karuba”