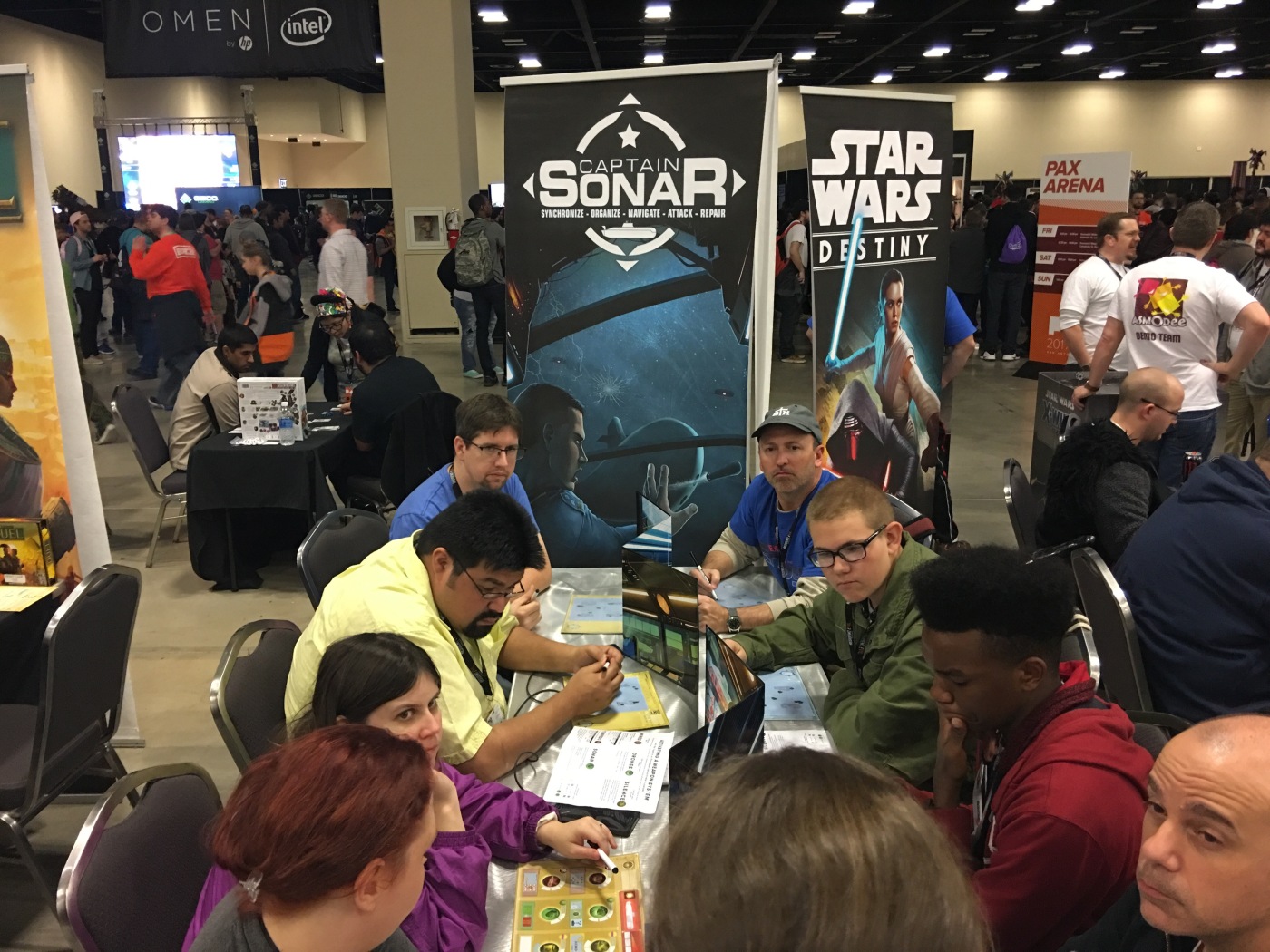 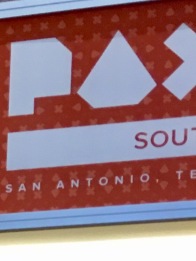 The third installment of San Antonio’s gaming convention showed the potential that PAX has to energize the gaming community. The crowds this past weekend were large, and there was a palpable buzz when the previously leaked announcement was confirmed: PAX is ramping up its support for table top with a new con, PAX UNPLUGGED, set for Philly the week of BGG.CON.

But enough about future cons, what about this year’s installment? PAX South 2017 was still in the same convention hall, the Henry B. Gonzalez Convention Center, but the newly refurbished center spilled out all over the convention, with plenty of room for table top and an expanded focus on board gaming.  Based on the larger spaces, more numerous venues, dedicated staff to table top and an expanded library, it is clear that PAX’s focus on our hobby is growing each year.

For tabletop gamers, the expo hall and table top area was the place to be each day.

The table top area had a very well laid out and large area dedicated board gamers to play games they brought from home, purchased from the nearby vendors, or checked out of the library.  While not as large in scope as GenCon’s table top area, there seemed to be more available table space on Friday (which could also be the effect of gamers being in school or at work).  Unlike Gen Con, the bathrooms were plentiful and convenient, located right behind the table top area.

I talked to Matt Morgan, the table top organizer for PAX, and he said there was an even bigger selection of games this year, topping 1000+.  While the library can’t compare yet with BGG or Dice Tower’s massive libraries, there was an ample selection of tried and true favorites as well as a few of the newer games. In all honesty, there may have been more hotness located in the library, but just checked out as I browsed.  The library was stacked on tables and alphabetized, and stayed open until midnight.

On Friday, we tried out Alien Frontiers, a Kickstarter favorite that I had always wanted to try. This was the version with the upgraded colonies and tokens, so it was very pleasing to the eye on the table.  I was warned by Mina from Mina’s Fresh Cardboard that the game was very random, and it certainly didn’t disappoint in that regard.

We played with three players, and I think that may be the sweet spot for this game. The fourth (dummy) player acts as a barrier to some of the spots, so it made for interesting choices as we placed our ship dice around the board. Yes, the dice rolling can be chaotic, and there certainly is a lot of player interaction, complete with a spot on the board that allows “raiding” other players’ goods / cards if the right dice roll comes out. But, we learned to mitigate the randomness during the game, because the alien artificial power cards and the tiles on the board themselves helped control the chaos.  All in all, a great little 1.5 hour dice chucking fest that looks great on the table.  I’d certainly play it again.

On Saturday, we tried out Farmageddon, a Grant Rodiek designed game, that I had brought from home. I already owned the original version, but just recently received the new version.  This version is definitely the one to get — better card art, better combos, and the designer got rid of the clunky field cards.  Don’t go into this game unless you have a group that likes a little (a lot!) of take that action and laugh out loud moments. Definitely a keeper for me.

We also played the inescapable PushFight, a game that is produced or resold (as best as I can tell) by Penny Arcade.  While inexplicably not available at the con, its presence was everywhere.  You could always see tables with the game being played. Some of the Krewe entered a tournament for PushFight, but we also got some free play in, too.  It is an enjoyable and well designed abstract one versus one fight, sort of like a streamlined version of chess. But, it has the satisfying mechanic of pushing pieces around and off the board. There is nothing like pushing a piece off to end the game! I am not a big abstract game player, but I would play this again.

I spent most of the weekend as a volunteer demonstrator for Indie Boards & Cards / Action Phase Games in the table top area. (There were also some exhibitors in the main exhibit area next door, the one with all of the flashing lights and noisy gizmos.)  That limited my time to visiting the hall until Sunday, but I did get a chance to walk around and see about 80% of the table top side of the Con.  Yes, Pax South 2017 does not have the size and scope of vendors as Gen Con or Essen, but there was plenty to see and demo and buy. From what I can tell, this was the largest table top exhibitor participation at any Pax so far.

I spent most of my time here, and got to visit with Tricia, promotions director for IB&C, and Travis, owner of AP. They brought a large selection of games, from the very familiar Coup to the hot games from 2016 like Aeon’s End and Kodama.

Kodama was a big hit at the con, with tons of players demoing and purchasing this beautiful little thirty minute card laying, secret objectives game. Most players told me they were drawn in by the beautiful, zen like artwork of the trees, branches and quirky little Kodama tree spirits. (We even gave away promo cards of what looked like little alien Kodama cards, and a new first player token, which I dubbed the Kodamameeple.)

But, there was a lot of interest in Aeon’s End and Ninja Camp, too.

Aeon’s End is a mind bending, butt kicking coop game where players build their deck to defeat a big baddie attacking the home city. The baddie throws minions at the heroes (who are all distinct with unique special powers), and players construct their decks in such a way as to team up to save the city.

The worst part of deckbuilders is “the shuffle,” and designer Kevin Reilly fixes this.  Con visitors shook their hands in amazement when I explained that there is no “shuffle” in Aeon’s End. Instead, players discard their hands and any purchased cards in any order, and when the deck runs out, players just flip the discard deck over and start again. Aeon’s End had two available expansions for it that brought in more heroes and baddies, with the same great card art.

Ninja Camp is a cute little abstract card game, which looked like a gamer’s version of Hey, That’s My Fish! Instead of picking up generic scoring tiles, I especially liked the special bonus actions that the cards you pick up give you during the play.

Also, Travis was eager to talk about Trickster, which is Daniel Solis’ new design. It was not available for demo, but the Kickstarter is up and doing well.

Asmodee, and its companies (Fantasy Flight, Z Man, Plaid Hat etc) had promotional style booths, with a large demo team on hand. We tried out Star Wars: Destiny Dice as well as Captain Sonar, and got a glimpse at the demos going on for Ashes:Rise of the Phoenixborn and Pandemic Cthulu, too. 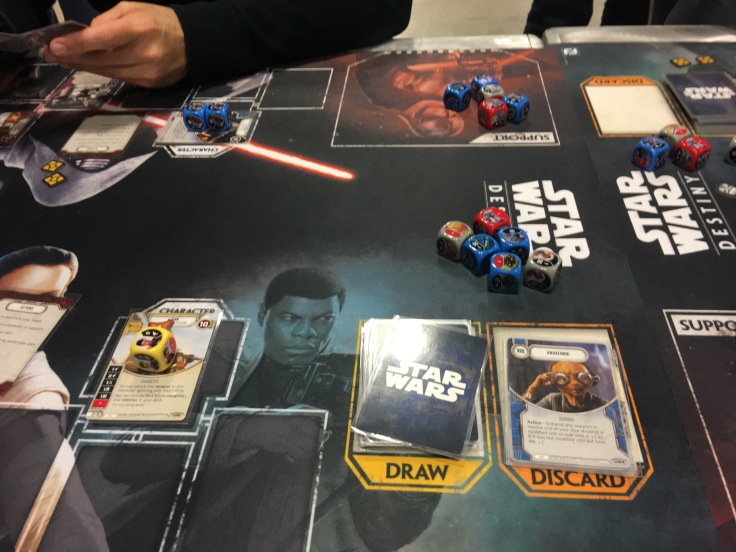 We played two pre-made starter decks with Rey/Finn and Kylo/First Order ST on either side. After a quick rules explanation (there were always two or three Asmodee demo team members near by to address any bugaboos), we were off and battling. I liked the smaller deck components and the highly thematic card play. I also liked the dice — they were chunkier and of seemingly better quality than I expected from the promotional pictures. All in all, SW:DD is a game that I would play again.

Captain Sonar is an awkward game to demo at a large, noisy con, but kudos to their team — they were able to get us up to speed and running quickly. The game was turn based rather than the more compelling to me version with both sides maneuvering at the same time. I was the radio operator, and enjoyed listening in and strategizing about where the other team was located.  Too noisy in the con for my tastes, but if they have any organized play at Dice Tower Con or Gen Con, I would definitely like to try it.

GREATER THAN GAMES / DICE HATE ME 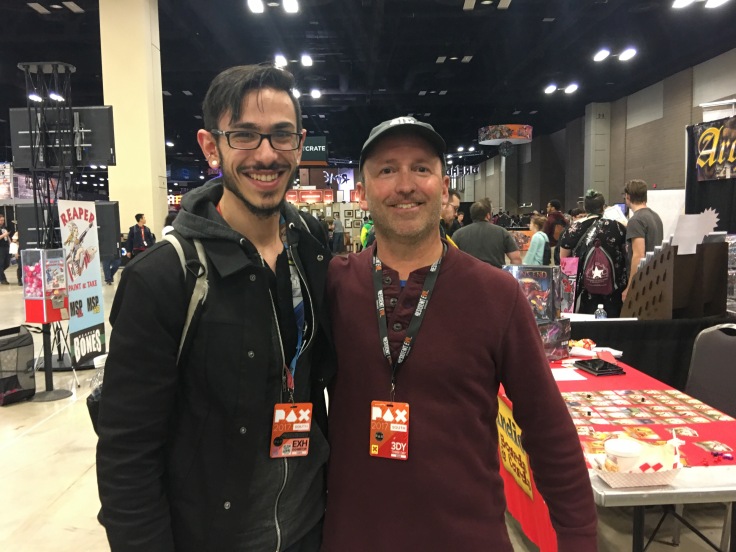 I also got to visit with Nolan Nasser and his brother at the Greater Than Games / Dice Hate Me booth.  He was demonstrating one of my favorite games of 2016, New Bedford (for which he did most of the artwork, especially the stunning box art for the base game and expansion.). Nolan was friendly, and said he has a few more projects in the pipeline.  Keep an eye out on Nolan, as he is a very talented young artist and you can tell that he really enjoys games.

Right nearby was the corner booth for TMG.  I visited with one of the promo guys, who told me the good news that Colosseum is right on schedule for delivery to Kickstarter backers. Long a grail game for me, this is probably my second most anticipated game of 2017 so far.

Located right at the entrance to the hall was the humongous electronics and analog gaming vendor section. This area had everything from well known game companies (Level 99, Red Raven) to smaller indies either in their own booths, sharing space with others, or picked for big displays at the Indie Showcase.

We’ll cover those companies in our next installment.