(Editor’s note:  Jason Dinger from Morgan City, Louisiana is the designer of the upcoming Essen 2018 release, Captains of the Gulf. He attended his first UnPub in Baltimore this month. His first entry covered the background of UnPub and some of the highlights of the con for Jason. Look for more posts from Jason in the future!)

While UnPub 7 didn’t officially kick off until midday Friday, many designers got into town on Thursday and got together in the hotel lobby for an impromptu game night. That was the first of 4 fun-filled days where I got to hang out, game with, and get to know several talented designers who also happen to great people.

I was fortunate enough to interview 3 of them as the dust settled after the weekend: Aaron Wilson (AW), Daniel Newman (DN), and Tony Miller (TM).

Can you give us a little introduction / tell us about yourselves?

AW: I’m Aaron Wilson. My wife and I just had our second child, Silvie in November. Our first, Stella, just turned 3 in March. We live in Ossining, NY, home of the well known Sing Sing prison. I commute to NYC every weekday to my job in pharmaceutical advertising at a big agency where I do Creative Direction.

DN: Midwestern boy transplanted to Brooklyn, NY 15 years ago. Wife, kid, 2 dogs. Architectural model maker. Got into game design a couple of years ago. One published game (Ahead in the Clouds) released this year. Another (Mech Chores) was signed this past fall and should see print at the end of 2017. Other games with publishers under review.

TM: I’m a father, husband, game designer and IT fireman who is relocating to Portland, OR in mid-April.

“Step Right Up” by Daniel Newman, a uniquely-themed medium weight Euro game with influences from both Feld and Gerdts.

Desribe UnPub in your own words. What does UnPub mean to you?

AW: It’s about meeting people. Seeing people you connect with. Playing games with friends and strangers. But most of all learning about what works with my own games and what doesn’t. What needs tweeking. Also, about getting your games in front of publishers.

Was super happy riding down and rooming with Dan Newman. Getting a lot of time with Dan, you, Donna, Tony Miller, Justin Brown, Isom and Duley. Getting some time with Ben Begal, Ian Zang, Jon Mofat, Chris Bryan, Adam McIver, Kerry Rundle, Josh Mills, Matt Wolfe, Nat Levan, Jason Kotarski, Zev, Rocco, Alex Kevern, Ruth, Jessica, Nicole and Anthony. I know this is a lot of name dropping but I love these people.

DN: UnPub is designer summer camp. It’s a great opportunity to connect with all the folks I talk to on Twitter all the time but only see at conventions. It’s also great way to get a tremendous amount of playtesting done in a short period of time with both other designers and the general public. But really, for me, it’s about reaffirming my place in the community and feeling like I belong.

TM: UnPub is where I go to be around the greatest people in the world, other game designers. My game design family is what keeps me going when I think about quitting.

Game designers in general are some of the hardest working and friendliest people anywhere. They know the struggles and hardships of building a design from scratch, testing it repeatedly, and continually iterating to attempt to make something the best that it can be. They understand the highs of seeing someone enjoying something that you’ve created and the lows of things just not quite coming together.

This makes me excited to be around other game designers and no convention offers that like UnPub. Gen Con has the new hotness, BGGCon has uninterrupted play time, but only UnPub has all of its time dedicated to the craft of design. 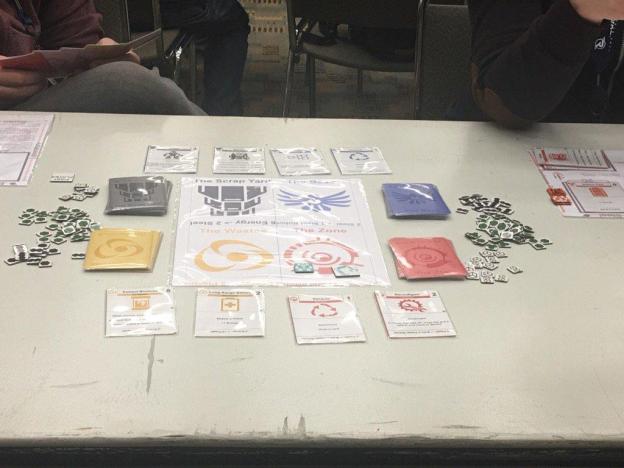 “Back To Rth” by Tony Miller and John Prather, hand-building game with a very innovative action programming mechanic where players have 3 cards in their tableau and add 1 each round, which pushes the oldest card to the discard pile and activates the 3 remaining cards.

What games did you bring to show / test this year at UnPub 7?

Dark Miss Down, a strategic 18 card 2 player game that’s about collect starship crew to complete ship repair tasks. This may be rethemed as a Hipster Brooklyn party promoter game for Tagmire’s Buttonshy contest.

TM: My illustrious co-designer, John Prather, and I brought 7 games to the show:

Back to Rth – a hand-building/action-programming game about reclaiming a polluted Earth 1000s of years in the future.

Fire in the Library – a press-your-luck game about rescuing books from the Library of Alexandria as it burns down around you.

Weather or Not – a trick taking game about wizards manipulating the weather in resort towns to maintain perfect vacation temperatures.

Busted! – a press-your-luck betting game that plays a bit like Blackjack.

What was the main game you showed at UnPub and how was the feedback / response from testers and publishers?

AW: New Reign. Huge positive response. Caught a little buzz. I got an offer from a publisher, but I’m still developing it and feel like it can be way better. We’ll see. Haha.

DN: Step Right Up was my primary game this year and it went over extremely well with play testers. By Sunday, it became pretty clear that the design was pretty much done and it was to the point where I was ready to pitch to publishers. I was able to get it in front of a few and have had requests for rules and PNP files from others who were unable to play it but wanted to take a look. I got a bunch of love on Twitter from people who played and wanted to share, which was awesome.

TM: The main game that I showed was Back to Rth, though both 18TeXMeX and Fire in the Library were played a lot too.

Feedback was generally positive with everyone agreeing that the core of the game was very smooth. Several players wanted it to be heavier than it is and others wanted a lighter game, so it mostly fell right where I wanted it. We got multiple wonderful ideas for both up-scaling and down-scaling the design, so we may end up doing both. 🙂

To find out more about Aaron, Daniel, and Tony follow them on Twitter at:
Aaron Wilson – @InternetsMagic
Daniel Newman – @dnlnwmn
Tony Miller – @beardedrogue or catch him on the Breaking Into Boardgames podcast on iTunes