Two days of pre-con gaming, four full days of gaming non-stop from morning until midnight, thirty-one different games played — and it all comes down to the last day of Dice Tower Con. (Click here for the previous posts about pre-convention gaming, or Day One, or Day Two, or Day Three).

Saturday was bittersweet, knowing that we were leaving that night. Jack and I met a lot of people at the con, and made a lot of good gaming friends. But, on the bright side, Saturday was also the morning of the Very Unofficial Dukes of Dice Baseball Highlights 2045 tourney. Plus, there should be plenty of time for gaming after the tourney ends.

Jack and I headed to the Con hall with very little sleep between us. He had stayed up way late playing a bunch of big con games like Werewolf, while I stayed up for another Ethnos game.

We ran into Alex from the Dukes and Evan, the organizer of the event, and started setting up tables and decks. We ended up with sixteen players, so four tables of four players squared off. (Brandt Sanderson from Portal Podcast could not stay, and we had a cancellation, so he was gracious enough to take a dive in the first round against Alex.)

Speaking of cancellations, the defending champion who lobbied to be a late add to the tourney didn’t show! When I left Max the night before after we finished Concordia, he apparently kept playing games until the wee hours of the morning. Sorry, Max, we’ll catch you at the next tourney. 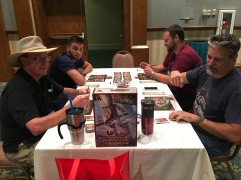 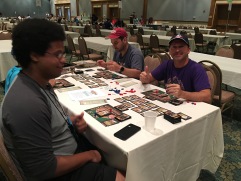 Back to the action — I quickly was dismantled by a young fellow from Jacksonville named Jeremy.  He has played many times on the app, but had never played the physical form. He quickly picked up on my plan to draft cards against his natural stacked deck, and then completely ditched the naturals for a spread between robots and cyborgs. I was lucky to beat him in two games, but he eventually finished me off four games to two. The fact that I was buying cheap robot control cards, and then missed the robot check the first five times, really hurt me.

Jack also had to face some pretty good players. He took on Jake from Draft Mechanic and Evan the Organized, before facing Burky from the Burky & Badger podcast show (and from Royals fame).  According to Alex, Burke is one of the best players out there, and won a local Dukes tourney in ABQ as I recall.  It was nip and tuck between them, but eventually Jack out drafted him to win four games to two.

While waiting for some of the games to finish, Alex set up a game of Flip Ships and played with Evan and Jeff from Mo, while I taught Sean’s buddy, Ellie, Kingdomino in the 7×7 format. Both games look so good on the table, are easy to teach, and have a lot of game in such small packages. I can rate both of them two thumbs up, despite Ellie destroying me in the format!

With Jack’s win against Burky secure, the finals were set!

Jack had to take on the same guy that beat me in the first round, Jeremy from Jacksonville.  What a matchup! Both teams were very good at buying cards and playing strategies. I broadcast bits and pieces of the match on Facebook Live before my battery crapped out. Each team split one game after another until the series was tied at three to three. It came down to the last inning of the seventh game of the World Series — just the way baseball should be played — and Jeremy could not get a visitor’s save.  Jack was the winner!

The Dukes of Dice were recording right next to the tourney with honorary Duke Suzanne Sheldon from The Dice Tower.  The show ran long, so they missed the final game, but Alex kept tabs on the score and gave updates to the podcast audience.  I had named the episode Rasp of Con! (I’M COMING AFTER YOU, NAME FATHER!!) and Sean was gracious enough to invite me to announce the episode name and talk about the con. Alex even got in a mention about Jack’s win, so he was very thrilled with that.

We had a few of the Dukes listeners stick around. Jeff from Mo, Ellie, and many others that I can’t remember all played or watched some of the games. If you haven’t played Baseball Highlights: 2045, you owe it to yourself to try this amazingly well done deck builder by the card guru himself, Mike Fitzgerald.

Then, it was on to the Stronghold booth, while Jack picked up another game of Game of Thrones. At the booth, I demoed Frogriders, the new Spiel de Jahres weight game from Stronghold. The game plays two to four players, and takes only about twenty minutes. Players jump frogs in a checkers type move, but each frog has a unique power, either giving the player points or allowing them to purchase upgrade cards or even taking another jump and another frog.

Frogriders looks beautiful on the table. It has a ton of colorful plastic frogs with stylized riders on the back. It has an easy mode, which I successfully taught to kids as young as second graders, but the game also comes with some “advanced” cards which have more gamer effects on them. The combination of the special powers of each colored frog, the public and hidden information regarding objectives and bonus points, and the more advanced cards all allows a family of gamers to play with different levels of interest from the non-gamer all the way up to the serious gamer.

With my shift over, and Jack still playing Game of Thrones, I went back into the main gaming hall and spotted Minneapolis Mike and Ellie’s friend Jay setting up Great Western Trail. I have really enjoyed every play I have had of that Stronghold release, so I was happy to join in when asked.

Great Western Trail is a classic Euro, where there are multiple paths to scoring victory points. Players take turns driving their cattle (in the form of a deck) all the way from one side of the board to the other. Once you reach Kansas City, you total up the cows in your deck and score points as your train takes off to points further west. Okay, thematically there are some holes, but the mechanics of the game are rock solid.

I tried a strictly Engineering and one builder strategy, but as usual lost out to the other three players who were focusing on cowboys.  I’m convinced that the Engineer strategy can win if played by a player with better resource management and efficiency.

And that was the end of the Con for me, as Jack arrived after battling it through with his Lannister House until the very end of Game of Thrones. We said our goodbyes, and then headed back to Louisiana, anxious to book our trip for next year.

So, after having attended a local con, the spectacle of Gen Con, and the warmth of Pax South, was Dice Tower Con all that Tom Vasel made it out to be?

Short answer, No, it was more than Tom Vasel made it out to be!

If you like gaming, there is NON-STOP gaming in the halls all five days. I always saw plenty of players wanted or teachers wanted signs. In fact, I ended up teaching Viticulture even though I was just passing by a table.  The library is AMAZING especially compared to the one at Pax South, which had a lot more of the mass market type games. Every game I wanted to try was available at the library, although you may have to wait.

If you like shopping, Gen Con obviously has a lot more vendors and newer games. However, people raved about the deals that they got at the flea market. Also, I was able to pick up a pristine copy of Aquasphere in the awesome Virtual Flea Market. Finally, the exhibitor hall and more vendors than I could see in my limited time, plus a full Cool Stuff Inc. presence. I was told that you could even order off of the website and have it delivered to the con if you did not want to search the humongous ding and dent area.

If you like organized play, there was a lot more of that than I was expecting. No, it is not like Gen Con where you can spend tickets on just about any game and likely play with someone well versed in the rules or even the designers themselves!  But, again there was a pre-con sign up sheet for informal teaching of games, and there were daily sign up sheets for numerous games in the Game Zone. I saw everything from New Bedford to Viticulture to some of the latest games all being offered for play.

If you are into the hottest games, or want to try prototypes, then this con is again for you. Tom set up a dedicated “hot games are” where many of the Spiel de Jahres nominated games and the hottest games from Essen stayed permanently set up on the table. You could fiddle with the pieces, read the rules, or join in a game 24-7.

I hope to collect more tips but here’s a few I collected along the way:

Well, that’s our Dice Tower Con wrap up. I hope to see you at the Con in 2018. It will be held at the same July 4th week and at the same hotel.

(Click here for the previous posts about pre-convention gaming, or Day One, or Day Two, or Day Three).