I’m a sucker for dragons.

Ever since I read the The Hobbit and the Dragonlance Chronicles as a youth, I’ve had a soft spot for any entertainment vehicle that featured these winged beasts of fury. As a board gamer, I am subconsciously always on the lookout for a board game experience in about an hour that gives me the thrill of discovering and taming these magnificent creatures.

Simurgh did not quite cut it. While the artwork is absolutely beautiful, and many of the elements of the game are unique, the game is dragged down by language barriers in the ruleset that make it more of a chore than a good game. Plus, the game suffers a bit because it just seems a bit short for the payoff, in other words, the investment in time that is given does not match up to the output.

Despite those flaws, I still love playing Simurgh and I am always looking to get it back to the table. But it is a tough sell. Is there a game out there that can scratch my dragon itch yet appeal to other gamers?

How about an island full of dragons, that you and your fellow wizards have to explore and tame?

That’s Dragon Island in a nutshell, a 2017 release from R&R Games designed by famed card game designer, Mike Fitzgerald. You know him from Diamonds and Pokemon, and of course, Baseball Highlights: 2045 among other releases.

Dragon Island is a 2-4 player tile laying and economic management game that plays in about an hour. Players play wizards striving to explore a magical island that is chock full of dragons. Be the most efficient wizard in building magical buildings, conquering the dragons, or training them, and at the end of the game, you will be declared top wizard.

Game play is fairly straightforward. There are some mandatory actions that you must take each round, like laying a new tile down and picking a random one out of a nice soft bag. And, there are some optional actions like building buildings that give you extra magical powers or taking the actions of a tile itself, or even, when you and your wizard friends are ready, taming or capturing dragons themselves.

The game components are very well done. These are giant tiles here that depict the different landscapes of the island, some almost as big as the palm of my hand. The dragons themselves are painted wood meeples, and the cards are good cardstock. The box itself is sturdy and has awesome artwork featuring dragons.

One quibble? The primary color of the tile borders really take away from the utilitarian artwork found on the different tiles. I am not sure what I would have done differently, except perhaps shrink up the edging and use more muted colors. Visually, however, the wood and the tiles and the cards really do stand out on the table. People will take notice of you playing this game.

This is just a beignet post, in other words, just a friendly hello to this title and not a deep dive review, because I have had only two plays, and both were at two player. I want to get more plays in, especially at higher player counts, before I really formulate my opinion about this game and before I give any advice to players interesting in playing or purchasing Dragon Island.

That being said, this is Mike Fitzgerald’s first ever non-card, tabletop board game, and it represents a nice opportunity to support a company that took a chance on a famed designer pushing his design envelope a bit. But there are some problems in the game that I found on first blush.

First, the rule book itself does a good job of explaining each action, but unlike other tabletop games — especially of the Euro variety such as this one — there is no “why” here. Sure, we are wizards exploring the island and taming dragons. But why? (Not from a thematic standpoint, that is well explained in the rules)

By that I mean why do we do any of the actions outlined in the rules? What is the sense of the game’s worth as an experience? Is it just to put out tiles and capture as many dragons as possible? That would not necessarily be very fun at all if all players did the exact same thing every turn in every round.

What we modern board gamers really want is multiple paths to victory, and my first play of Dragon Island frankly just did not have that feel. It felt like both of us were just putting out tiles.

Luckily, I played it again right after that first unsatisfactory play, and the second time was much better. I started to understand the nuances and strategies that abound in playing the different tiles, or moving dragons around (a seemingly useless skill at first glance, which is rather important.) I just wish that the game had a little more baking, because the raw dough interferes with a finished product that is in fact quite tasty. 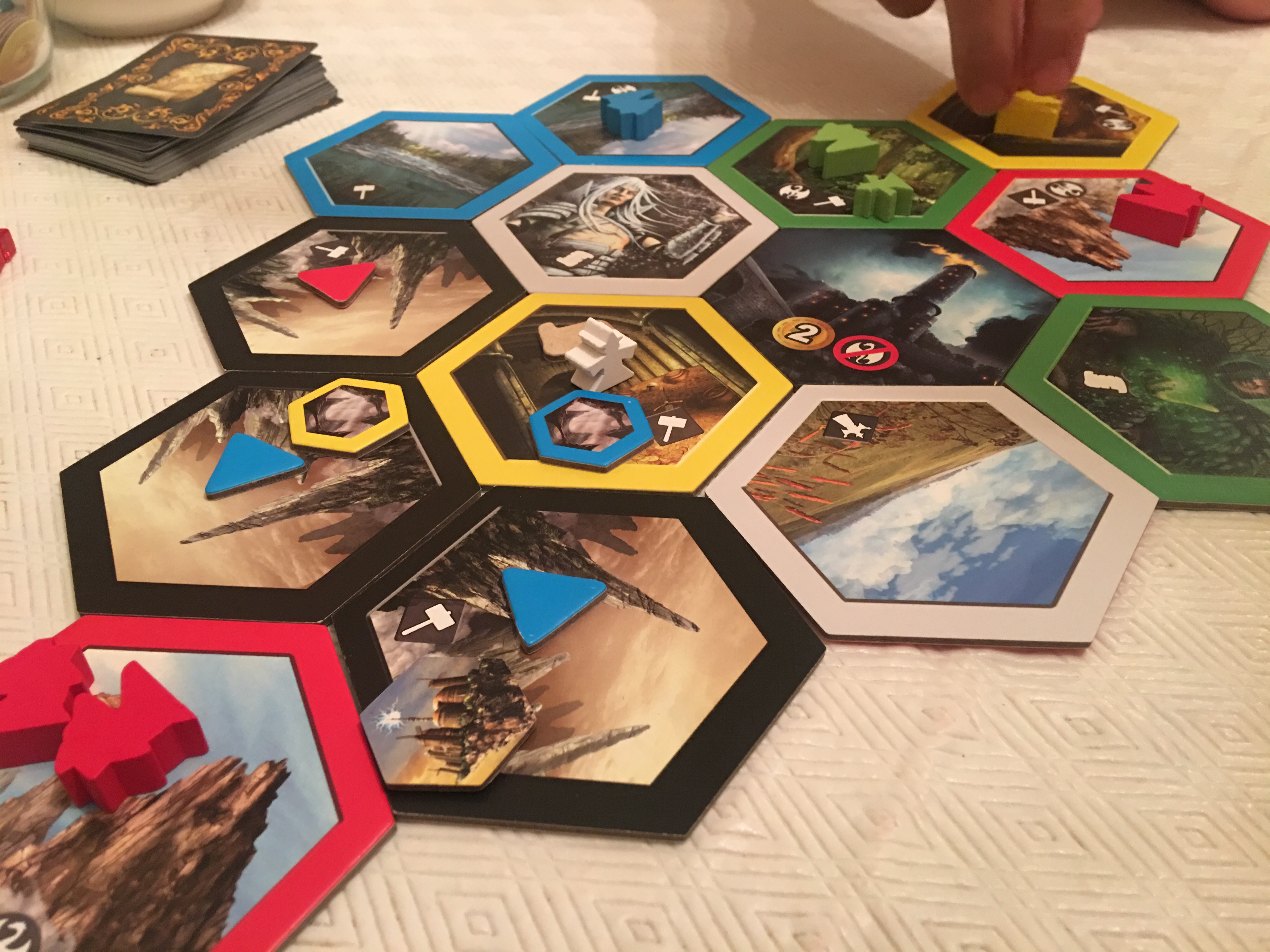 So why should you play or buy Dragon Island, if I hint that it may not have been baked all the way?

First, because I’ve had just a few plays so far, and reviewers (of which I do not consider myself one) should always have multiple plays with different player counts before making their final decision. I want to see how much more “baking” this game requires as opposed to just finding out those things are already done as we enjoy more plays. I’d love to hear from you on your experiences if you find this game in the wild.

Second, I really enjoyed my second play. Mike Fitzgerald has added some flavor to this game, and even to this type of game (an otherwise typical Euro type efficiency game). Moving the dragons around, simultaneously building up the various magical powers that come from the different colored tiles, and setting up combos and more powered actions, are all interesting mechanics that feel unique. While clunky and unintuitive at first, once you get the hang of the progression of actions, you should see a unique twist and different vibe from other standard Euros.

And finally, it goes without saying that the wooden bits are just so darn cute. The dragon meeples look good on the table and are big and chunky. Plus, the artwork on the cards, especially the tamed dragons, is good looking. There is something satisfying about working towards taming all five different dragons.

As I said, I need more plays of this game before I can rate it, but I am leaning now to a 3 out of 6 on the Dukes of Dice / Blue Peg, Pink Peg scale — a good game, but just not one I want to play everyday. More correctly, I do want to play it every day, but only because I want to explore the game, but I just do not have a lot of hope of repeated plays with the same crowd. If there is any big drawback to the game, besides the somewhat clunky rules, it is the fact that it will look visually appealing on the table, but I may have problems recruiting players.

So that’s Dragon Island by Mike Fitzgerald and R&R Games. Short answer is that I liked the game, but if not for the fact that I purchased it personally from Mike at GEN CON 50 and he graciously autographed it for me after giving us a demo of the rules, I might have been looking to trade it. As it stands now, I definitely want to get a few more plays in before making that decision.

Let me know what you think about Mike Fitzgerald’s first attempt at a board game if you have seen the artwork or played the game by leaving a comment below. Or, you can always reach me on Twitter @boardgamegumbo or leave a comment on our on our Facebook page.