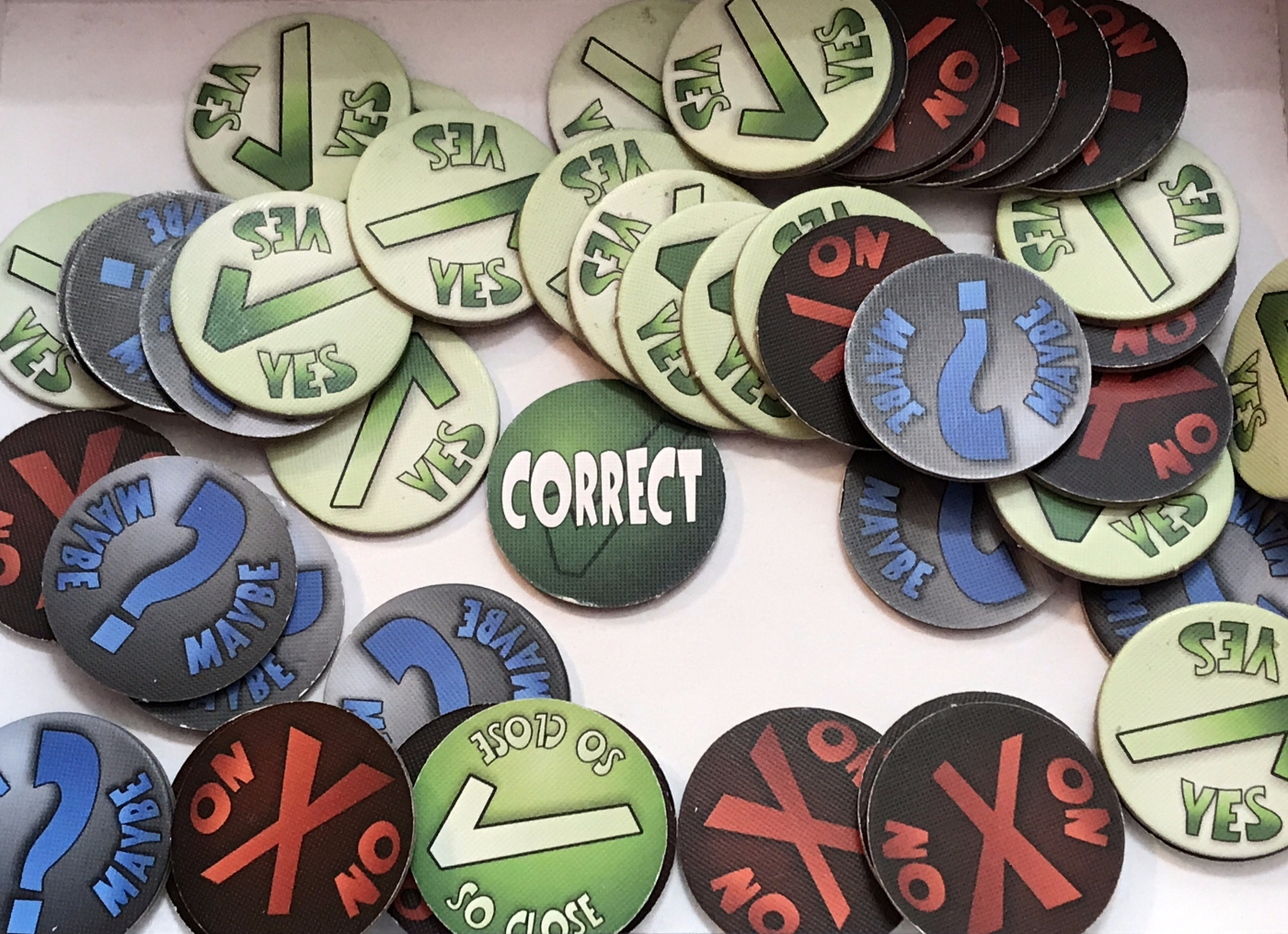 I remember New Year’s Eve at a family gathering, probably sometime in the late nineties or early two thousands, when my sister suggested we play “a new game.” She called it Mafia, with a basic premise that will be so familiar to Werewolf fans.

Players have secret identities; they are either on the good side (the townspeople depending on the game) or they are on the bad side (the mafia). Through questioning and actions taken, players try to figure out which of them are the mafia, and vote them off each night before all of the villagers are killed by the mafia. (Substitute villagers and werewolves for townspeople and mafia, and you have the basic Werewolf game.)

Our family holiday game nights up until then were pretty tame affairs, dominated by Cranium or Trivial Pursuit or Charades or any of a number of mass market party games or card games. But this Mafia was different and social and we played all night.

Enter Bezier Games, who have done an amazing job in streamlining the game from one which can take an hour and leaves the early ones voted out doing nothing but either watching or wandering away from the game, into slick and smooth five minute games with their One Night Ultimate…Series. By now, Bezier must have hundreds of different roles to gamers, and even produced a fun app that walks you right through the game, step by step.

After playing these games so many times I have lost count, the basic elements of the “accusation” part of the game were starting to bore me. Find the person with the least best poker face, accuse them one way or the other, and then listen to the arguments from each person to guess as to who is the werewolf. Sure, as one of our Krewe is fond of saying, the meta game, bluffing and deduction are all there, and really constitute the heart of the game. But, I have been looking for something different, a game with a purpose as to why you are questioning each particular person. And I think I found it.

If your game group is looking for a new type of social deduction games, and wants to amp up the deduction, then Spice it up! with Werewords by Bezier Games.

Werewords is a social deduction game with a purpose. Players try to guess a secret word using only “yes” or “no” questions. But someone in the group is a werewolf, actively trying to discourage the group from guessing the word. If the villagers can guess the word, then the werewolf is banished forever (or until the next round) — unless the werewolf can guess who the seer was, because that person was secretly steering the villagers closer and closer with each guess.

At this summer’s Dice Tower Con 2017, I saw the signs for this 2017 Bezier Games’ release. Unfortunately, we never made it over to the booth to try it, but I made it my business to pass by during Gen Con.

(Coincidentally, the woman at GEN CON 50 who sold me the copy of Werewords was the same woman who I taught how to play Not Alone at the Stronghold booth during Dice Tower Con. Small world!)

From four to ten players can play the game, but honestly it works best around six to eight players. That way, players can throw in a few extra roles, like the minions and beholder or an extra werewolf.

Just like the other games in the WereEmpire, the game has a free app that you can use to run the game. I have introduced this game to same very novice board game groups, and the app really helps people not only get into the spirit of the game, but also helps them figure out their place in the game without forcing them to ask embarrassing (to them) questions.

Just like its brethren, Werewords can be taught in a minute, and plays in under five minutes. The game is just short enough that your group will probably want to play as many rounds as you have people in the group — or maybe even twice around the table. Plus, the game is surprisingly meaty enough that you just cannot stop with one pass.

Remember when I told you that the accusations were boring me in previous incarnations? Not so in Werewords, because you have been given a purpose and a direction in your questions, your active listening, and your accusations. Is someone throwing out a lot of guesses, misguided even? Perhaps they are the werewolf, and you can likely throw some shade their way. Is someone sitting back quietly, yet effectively, subtly, and nonchalantly steering the group toward the correct answer? Sounds like potential seer material. 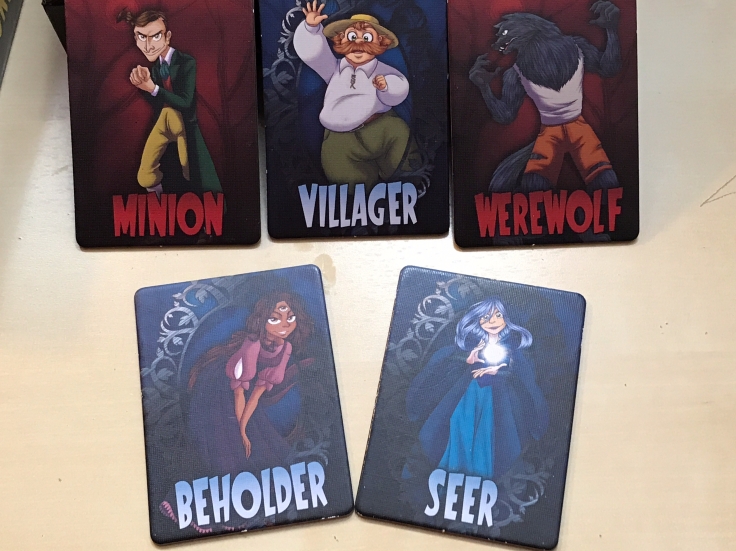 Even the meta game ramps up. Suppose someone is busted one game for being too nosy of a werewolf. Watch for them to clam up the next time, and swoop in with an accusation. There are so many other strategies, all based on your knowledge of the clues, and the clue givers, as well as the tips and tells that are the hallmark of any good social deduction game.

Werewords is rated just above a 1.00 on the BGG complexity weight scale, and that seems about right. This game is not meant to be clunky and overwrought. It is meant to be quick, with the engine hidden behind the smooth chassis so that even the best gamers will not notice the inner workings.

If I have more time, or I have a more experienced group, I will probably steer the group more to Deception: Murder in Hong Hong. I say that, but since we have gotten this game, it has hit the table consistently in all of my different game groups (family, novice gamers, and the Krewe de Gumbo — where it has been played at Gumbo Game Night twice in the last two weeks.)

As for the implementation of the game, the game comes in a small box just the right size to throw into any backpack or game night bag, and the pieces are sturdy cardboard with colorful pictures of the clues and of the roles. The instructions are short, easy to understand, and can be used to run the game if the app is not available.

Are there any downsides? The app includes four different levels of words, and while gamers may think that playing hard or ridiculous words adds fun to the equation — and we have had a few funny situations come out with the harder words as people have gotten “lucky” guesses, only to be unfairly castigated as the seer — but our experience is the opposite. The lower level of words makes it a little easier to turn on the keys to the social aspects of the game. The finger pointing will start in earnest, because there are more chances for the seer and the werewolf to subtly influence the group, and then pay the consequence if they are a little too obvious. Plus, the artwork while fun and fitting for the game, and admittedly consistent with the other games, is a little too cartoony for my taste.

Overall, I can highly recommend Werewords to any group of gamers that likes social deduction games, and looking for that start of the night or end of the night filler. If the gamers in your group like to give each other the interrogation eyeball, or laugh it up when someone is busted as the seer or werewolf (or better yet — the lying, conniving mayor / werewolf!) then head on down to your friendly local game store and pick up a copy.

2 thoughts on “Spice It Up! with Werewords by Bezier Games”