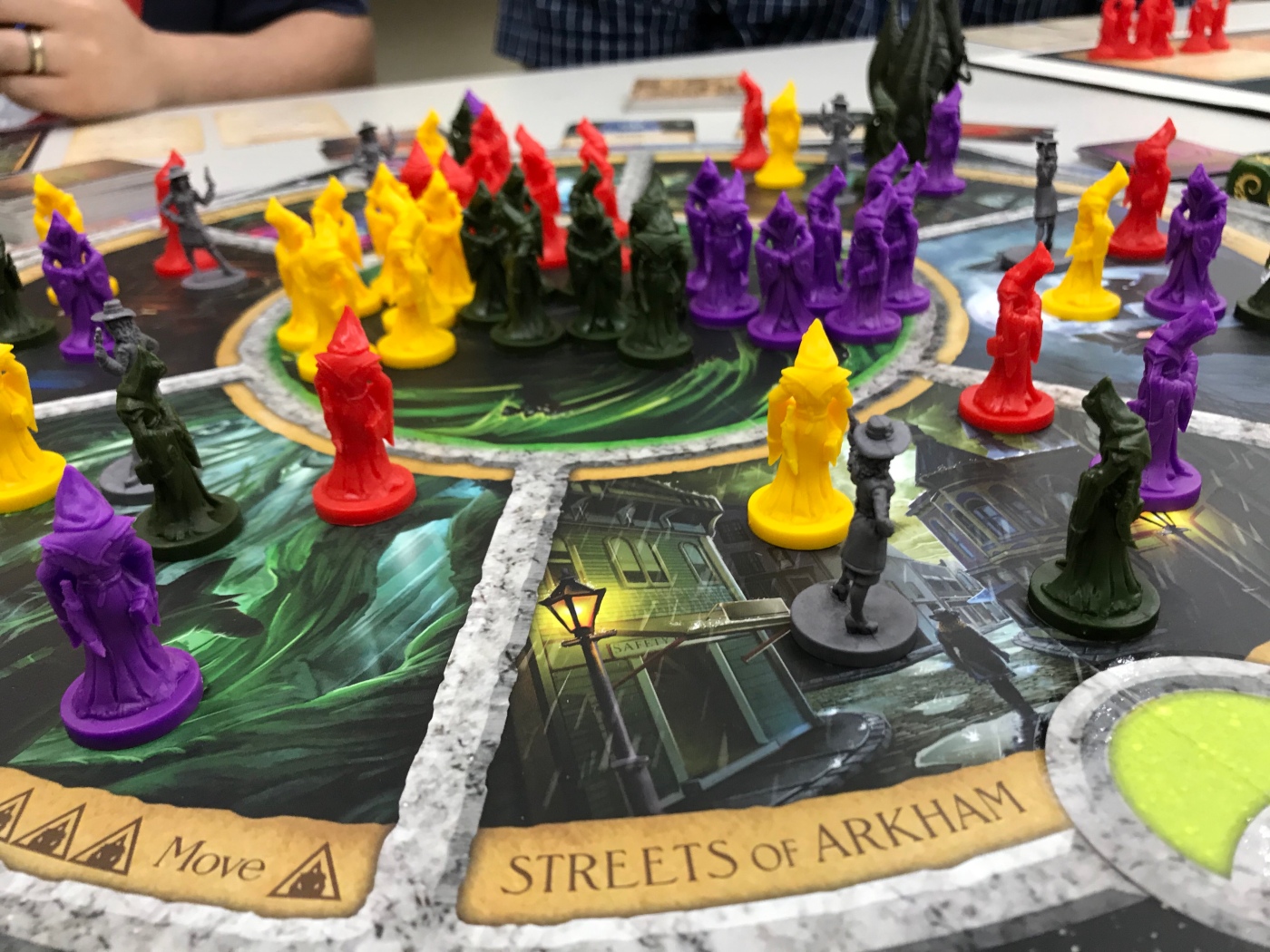 I’ve been gaming as long as I can remember, and I’ve always been drawn to heroic characters. If we played an RPG, I wanted to play as the third son of a minor noble, drawn to the cloth as a cleric or to the sword as a paladin, eager to make his own way and look for adventure beyond every mountain peak.

My tastes in literature have run the same: the reluctant hero who overcomes his failings to save the school, or the country, or even all of mankind is generally my favorite character.

As I have gotten older, I have occasionally eyed the character arc of the anti-hero — that brooding, mysterious person whose motivations are unclear, but who almost always meets his or her goals — with some fascination. Being on the good side, especially in the world of fantasy and science fiction novels, generally means you are on the winning side, right?

But, wouldn’t it be fun every now and then to play the tortured outcasts who long to step over those who badly treated them, to experience the heart-racing thrill of those willing to sacrifice their own souls to get revenge on this cold, cruel world?

If you have ever had the envie to play the bad guy, then I might just have the game for you. Spice up your game nights with Fate of the Elder Gods, a new release from Greater Than Games / Fabled Nexus imprint. 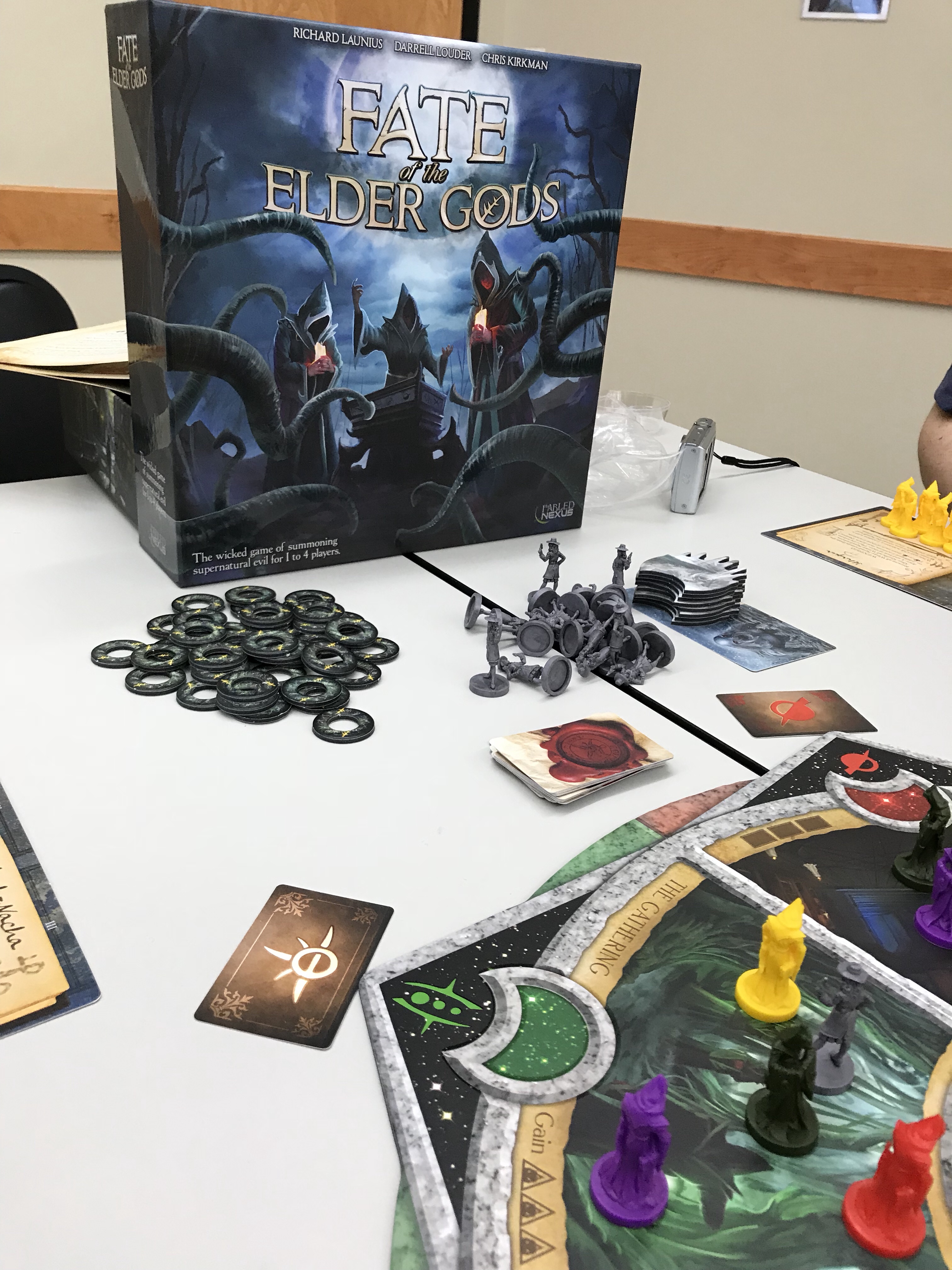 Fate of the Elder Gods is a dice and card based action selection game for 1-4 players designed by Chris Kirkman, Darrell Louder, and that famed Cthulu lorist, Richard Launius. The game turns your standard Cthulu themed game on its head: instead of playing a typical investigator trying to save the universe from the onslaught of the Elder Gods (a la Elder Sign or Arkham Horror), players are “cultists” competing to bring their version of chaos to our plane. Greater Than Games (the parent company of its imprint, Fabled Nexus) was kind enough to provide us with a copy of the game ahead of the Envoy Splash that we are doing in December and January.

The three designers have really focused on making the mechanics in this game fit the theme. Cultists bent on world domination would not very well work together, now would they? Of course not, and each cultist can cast spells to help them in the fight, or subject the other cultists to raids by the investigators. Curses can lay waste to the grand plans of a cultist, and can happen at any time, triggered by a hidden objective only your competing cultist knows. 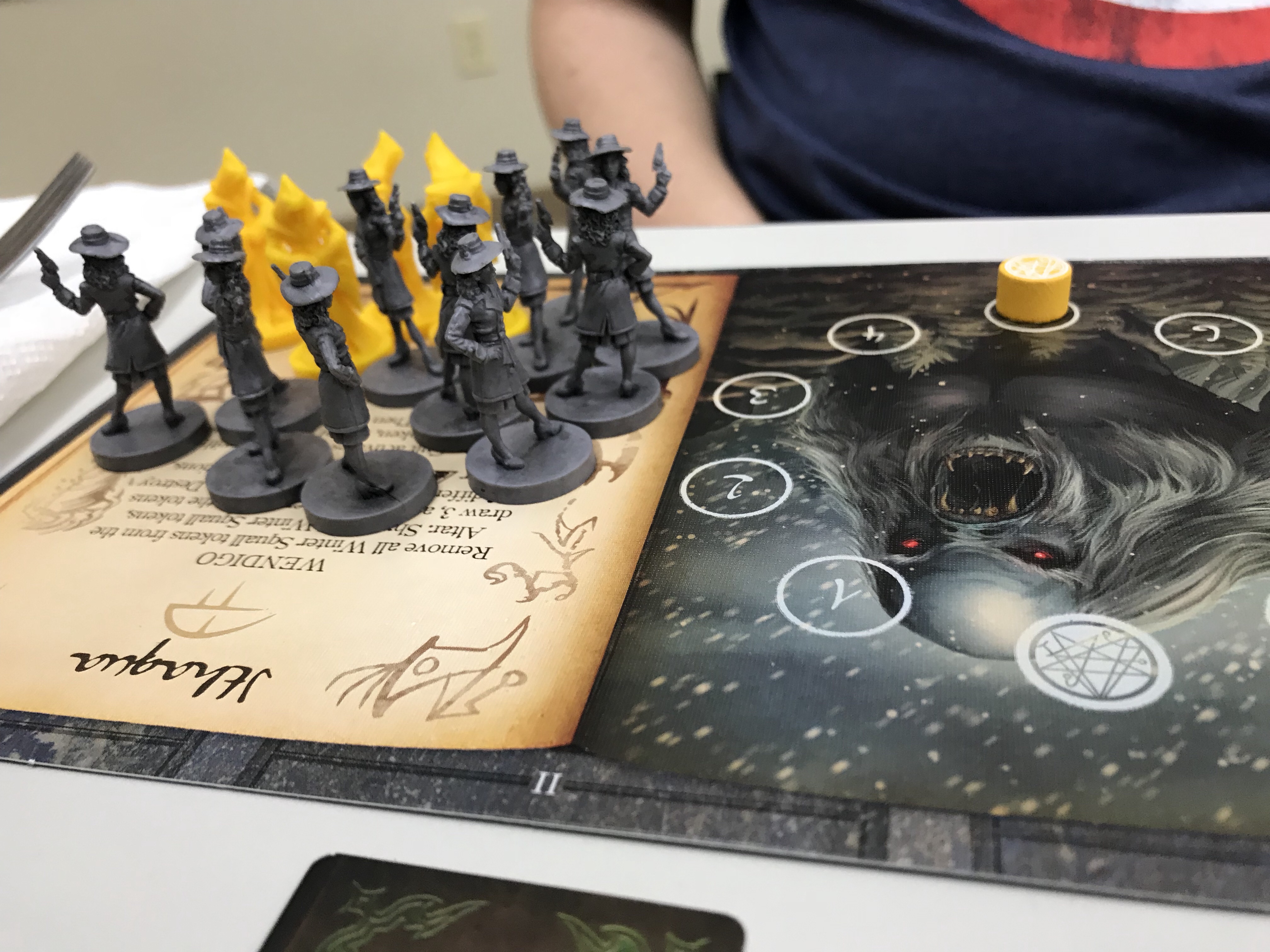 The production value of this game is off the charts. The board is big, beautiful and has UV spotting to make areas shine. Each of the six action spaces is themed to typical areas found in the lore. There’s a library to learn new spells, the streets of Arkham is there to help you duke it out with the investigators, and of course, there’s an Otherworld Portal where you can strengthen your summoning power.

Plus, the bits and pieces are fantastic. Each cultist is represented by a ton of cultist miniatures in one of four bright and distinguishable colors. The investigators are a gray drab and definitely look like the enemy — a welcome change from other games. The elder signs are sturdy cardboard rings that feel like sealing your doom every time you place one on the unique player boards that represent each Elder God.

That leaves the gameplay. For fans of gateway games, Fate of the Elder Gods is going to look busy and complicated. Rest assured, the game is easy to teach. I usually explain the unique theming, which raises some eyebrows for some and puts a wicked grin on others. Then I move to the turn, which players follow in the same exact order throughout the game. Finally, I walk the players through each action space, and show them the cheat sheet that Greater Than Games has helpfully provided. Within the first two turns, every one of the play groups I have taught has picked up the game play with ease.

Essentially, players play spell cards out of their hands representing a color. Those colors match the six action spaces, so if you play a red spell card, you will move to the red action space. (The action marker — called the “Fate Piece” — is fun, too, as it is an oversized figure from Lovecraftian lore, and is very impressive.) The player then resolves the movement. If there are too many investigators, they join the player’s “lodge” (i.e., the player board) and if too many of them remain at the end of the turn, a “raid” happens. Raids are tense dice chucking fests where players may end up with more seals preventing them from calling down their Elder God, or may be friendly battles where investigators are banished back to the main board. (Spells and artifacts can of course help you mitigate the luck.)

The game has a unique area control mechanic. If your cultist controls the action space, your cultist gets a bonus action — and these are strong. Much like in Scythe, a key to winning the game seems to be the efficient use of cultists to play the “bottom action” on the space as many times as possible.

So, how has the game experiences been? I have played this game a number of times, at player counts ranging from three to four. I found the game easy to teach, with a lot of strategy. The movement system is probably the hardest to understand, but takes only a few turns before it becomes natural to place a spell card where ever the fate piece is currently, and then move the fate piece to the corresponding location on the board.

I really like the delicious decisions presented by the spell cards. Do you use the front side to move to your most needed spot on the board before someone else blocks you? That uses up the card, unfortunately. Or do you keep them in your hand? On the hidden side of the spell cards are very powerful incantations that can change the rules of the game, throw luck in your favor, mess with other players, and/or further your goal of bringing the Elder God to this plane. So, readying that spell not only gives you more spell colors to use in casting further spells. And do you cast the spell? That loses the spell colors, but just might be the boost you need to win the game.

Sure, one of the Krewe de Gumbo complained about the unfairness of the curses, in that a player can have a well-planned strategy crumble into dust when a move triggers a curse. But, isn’t that thematic? In most literature, the evil ones bent on subjecting the planet always have a blind eye to the plans laid by the forces of good. And how many of your favorite books have relied on human characters having just a wee bit of good luck thrown in to help them overcome almost overwhelming odds?

Overall, the game has been a hit in every group we have played. If there is a negative, some players will struggle with the programming aspect of figuring out which space on the board is the best this turn, and the tough decisions as to which cards to use for movement and which to use for spell casting. In one notable case, one player took almost as long on his turn as the other three players. But that is not a problem of the game so far, as it has been an isolated occurrence. Generally, there is enough time watching the player to your right handle his turn that each player should have a good idea on how to execute.

And again, it is the theme that really shines through this game. Yes, there are some euro style strategies and mechanics, but at its heart, this is a thematic game experience. You would not expect any less from Lauinius and company, of course, but the game’s foundation is rock solid. I highly recommend this game. If you are looking for a good strategy game that has a fun, unique theme, head on over to your friendly local game store and pick up a copy of Fate of the Elder Gods. The ancient ones will patiently await your decision.

3 thoughts on “Spice it up! with Fate of the Elder Gods”