(Editor’s note: Since our blog post back in February, our friend Nolan Nasser of Deepwater Games let the cat out of the bag — Mystery of the Temples is hitting North American shores soon and being released by the company! Here’s a link to their Kickstarter page if you want to get your hands on your own copy. Plus, the new version comes with a dedicated scoring board and it is color blind friendly, too!)

I love small box games that that belie a much larger game in their tiny package. There is a visceral thrill when I can plop a tiny game box on the table, and see the puzzled faces — or even frowns — as gamers assume that this is “just another filler”, but then watch their eyes light up as the game begins.

I have had a number of experiences like that, many from the Oink line of games. Games like Deep Sea Adventure and A Fake Artist Goes to New York look like tiny little games, yet provide a much larger game experience.

Some game companies are really packing in giant games just in a tiny box. When the Krewe de Gumbo played Tiny Epic Quest at GEN CON 50 and at Gumbo Game Night, we remarked how at the end of the game we weren’t looking at a tiny game anymore. Small box games have really come a long way lately.

And so, I was excited upon hearing the buzz about a set of games from Emperor S4 Games. I played Hanamikoji first, with my buddy Matthew from the Dukes of Dice in New Orleans at one of the new board game cafes there. It was a very small card game, but wow, such delicious decisions in how you play each card!

I kept hearing more buzz about another one of their games and finally got my hands on a review copy. If your game group likes small box games with big flavor, then Spice it up! with Mystery of the Temples! 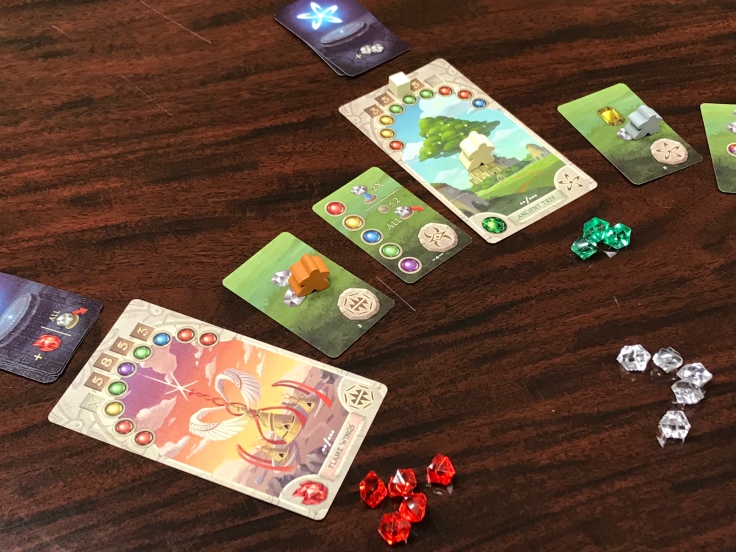 Mystery of the Temples is a twenty to thirty minute set collection and area control game with a cool theme. Up to four players play as “curse breakers” wandering through the wilderness searching for temples, and breaking the curses that have been placed upon them. (“Searching” is probably a bad choice of words there, because the temples are laid out in a pentagon right in front of you).

Players will take turns collecting one of six different gems, which can be used to break the curses. The different patterns of the colored gems to be used are on each temple, and you can even trade in the “colorless” gems for specific colors that you want at certain wilderness areas.

Players are limited to twelve gems, and they are linked on their collection sheet, meaning that to redeem the gems, they have to line up in order on the sheet and match the order on the temple. It is not as hard as it sounds, because players can use the colorless gems to buy more colors or move gems around. Once the curse is broken, players are rewarded with “rune” cards which give you extra bonuses when you visit areas that match that rune symbol.

The first curse breaker to break five curses triggers the end game. Scoring is easy — count up the value of the curses that each player has broken (the more difficult patterns are worth more points), count up the different types of rune cards (this is the set collection part), and finally, look at the area control of each temple (the more curses broken at a temple, the more points a player will score).

This is a small box game, but the components feel like they came from a larger production. Each temple has beautiful artwork on the oversized card, and the gems are nice little plastic representations from each color. Each player has a colored meeple representing their curse breaker, and tiny little cubes to score each curse broken.

The game’s score board was a downer — to save space, the company printed the score chart on the bottom of the box, which sounds like a good idea, but is hard to see from all areas of the table. It would have been a lot easier just to print one extra oversized card. (editor’s note: This has been fixed in the Kickstarter release).

All in all, this is a very nice production that fits the theme and fits easily back in the box.

For any small box game to work, I think one of the most important features is whether it overstays its welcome. Thankfully, Mystery of the Temples does not. The game box says the game takes about 20-40 minutes, and so far, our games have been running around 30 minutes or so. Each player takes turns moving their curse breaker either on the temple cards, collecting that temple’s gem or breaking that temple’s curse, or on the wilderness cards that are spaced between each temple, so the decisions are very quick and the pacing is just perfect.

The game checks off a number of mechanics all in one tiny package. Obviously, it can be important to collect as many different rune cards so that you can score the maximum set collection bonus. However, that is balanced by the fact that you can “chain” the effects of the rune cards — if you land on a space that matches your rune cards, you get the bonus from all of your rune cards that match that space, not just one card. Deciding whether to build an engine or go for end game scoring is a tough but rewarding one.

Plus, you have the great area control mechanic. Do you try to fill up a temple or two with your curse breaking cubes, to ensure eight points (which could be the difference between victory or defeat?) or go for the highest scoring curse at each temple (which is worth a whopping eight points per curse!) Again, this little box has some big game decisions that your players will agonize over.

Finally, there is just enough player interaction to keep it from being a solitaire game. Players can move up to three temple cards or three wilderness cards, but cannot share a place card with another player. So, players will be on the lookout for cards that give them the gems they want, but also block another from playing. Plus, players will have to decide which temples to break the curses, keeping an eye out for what other players are collecting and which curses are still open.

I have enjoyed immensely the quick play and juicy decisions that come with each game so far.

A game that can combine set collection and a little bit of area control, with player interaction to boot is going to be right up my alley, and Mystery of the Temples certainly fits the bill.

2 thoughts on “Spice it up! with Mystery of the Temples”