One of my earliest memories of playing board games is the ever-ubiquitous Monopoly. Of course, we played with house rules that likely ruined the fun of the game, but oh the thrill of rolling those dice. There was always a tension as you approached the second side of the board, staring down rows of hotels in the purple, orange, red and green properties. Could I survive one more round?

Dice chucking gets an admittedly bad rep in hobby board games. Yes, games have come a long way since the dull offerings of Monopoly, and yet….there is still a visceral thrill of holding a die or even a handful of dice knowing that the outcome of your game depends solely upon the result of your throw. How can designers best capture that thrill, without the stultifying boredom of a roll-and-move game?

I have been very intrigued by the increase in the subgenre of hobby board games called “roll and write” games — or as Marty Cannell from Rolling Dice and Taking Names Podcast calls them, “Write & Roll” games (a moniker I much prefer). Seemingly every month, there is a new roll and write game that comes out, and they are getting better and better with each offering.

And that’s why when I heard about a portable little roll-and-write that was supposedly easy to teach but still had some depth to it, I knew that would be right up my alley. Does your game group enjoy chucking dice and planning strategy using the results? Do you and your family enjoy quick little filler games that still carry some meat on the bones?

Well then, Spice it up! With Harvest Dice by Grey Fox Games. 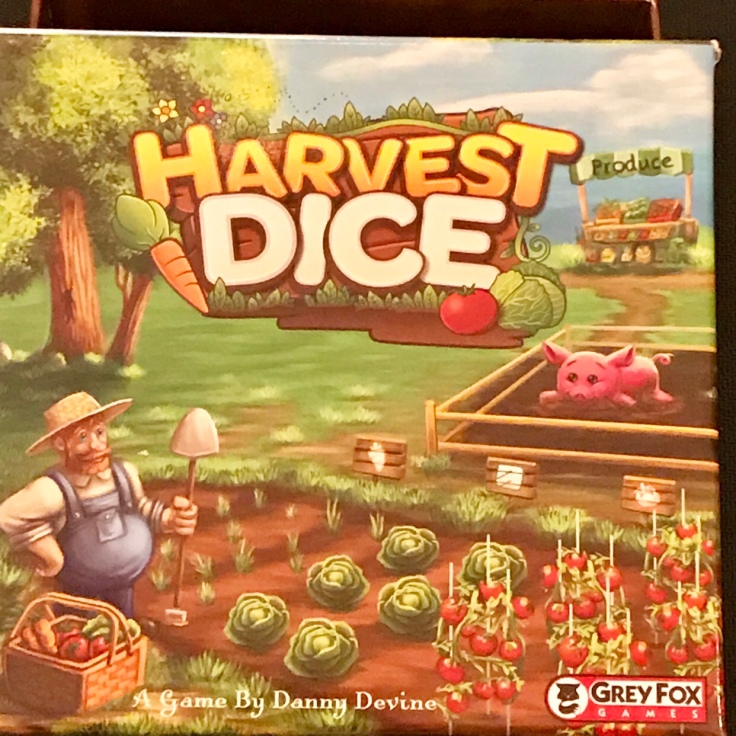 Harvest Dice is a roll-and-write game for 2 to 4 players designed by Danny Devine with art by Tyler Myatt and Danny Devine that can be played in about 20 minutes. The first player each round will roll up to nine dice in one handful, three sets of green, red and orange dice each representing lettuce, tomatoes and carrots, respectively. Players take turns choosing one of the die, and mark the results on their scoring sheet. The dice can be used either to fill in the three different types of vegetables into their garden into patterns that will score points at the end of the game, or instead, players can choose to feed the harvest pig which allows players to manipulate the dice rolls during the game.

When one of the players reaches the end condition (generally filling up a portion of the score sheet), the game ends at the end of the round. The players then tally up the score. The game includes a set of expert level score sheets that adds more ways to score bonus points or to manipulate the dice rolls.

This is a small box game that can easily be fit into a backpack or briefcase. I tested that theory out myself, carrying the game all the way to Big Bend National Park in southern Texas on the Rio Grande River where my scout troop and I played games on the picnic table each night. We even played on the trip back using the box cover as a place to throw the dice. In other words, this game is very portable.

As for the production value, it is top notch and appropriate for the style of game. The dice are small but colorful. Tons of score sheets are provided and are easy to read and understand, and four pencils for the players are even included. The game even comes with a cardboard first player marker with Pip the Harvest Pig’s face on it. Overall, this is a good production.

I have played this game at two, three and four player counts, with both experienced gamers and new players alike. Judging the game play in comparison to its brethren filler games or gateway games, this game easily fits the bill. The game is very easy to teach as players just have to remember that they are drafting a couple of dice in each round. (The tricky part is where to put the die you choose).

The game uses a typical snake draft to choose the dice, and that gives just enough time for players to consider how they want to add the results of the dice rolls to their garden in each round. Leaving room on the sheet to build large patterns of the different vegetables is something even brand new gamers will pick up on right away.

Plus, since each round, players will have one extra dice that will not be chosen, and that dice result is used to advance one of the vegetable’s scoring multiplier for the end game, there are some delicious decisions to be made as players warm up to the game. How can a player best manipulate their choices to ensure that the favored vegetable in their garden continues to advance on the multiplier track? 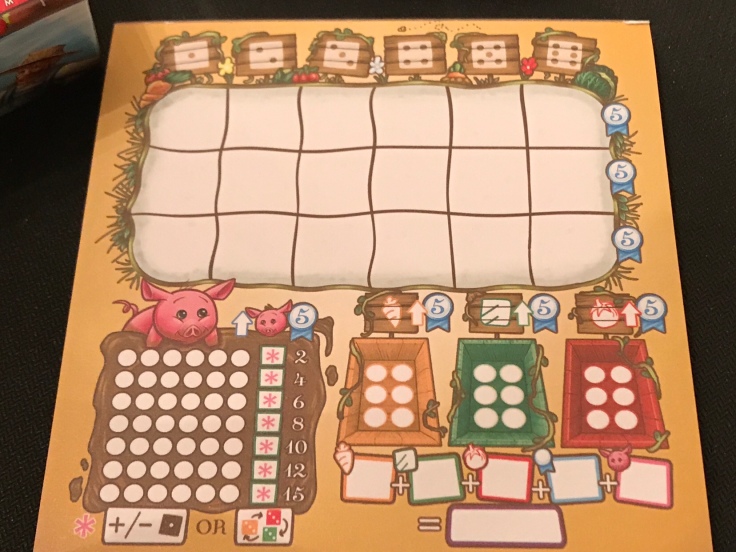 Don’t get me wrong, this is not a particularly deep game. It is not on the order of calculation as as No Siesta!, the dice drafting and roll and write game based on La Granja. But, it is a great introduction to the genre, and has just enough heft that it should be pleasing to veteran gamers and brand new gamers as an opening game of game night while waiting to set up a larger game. 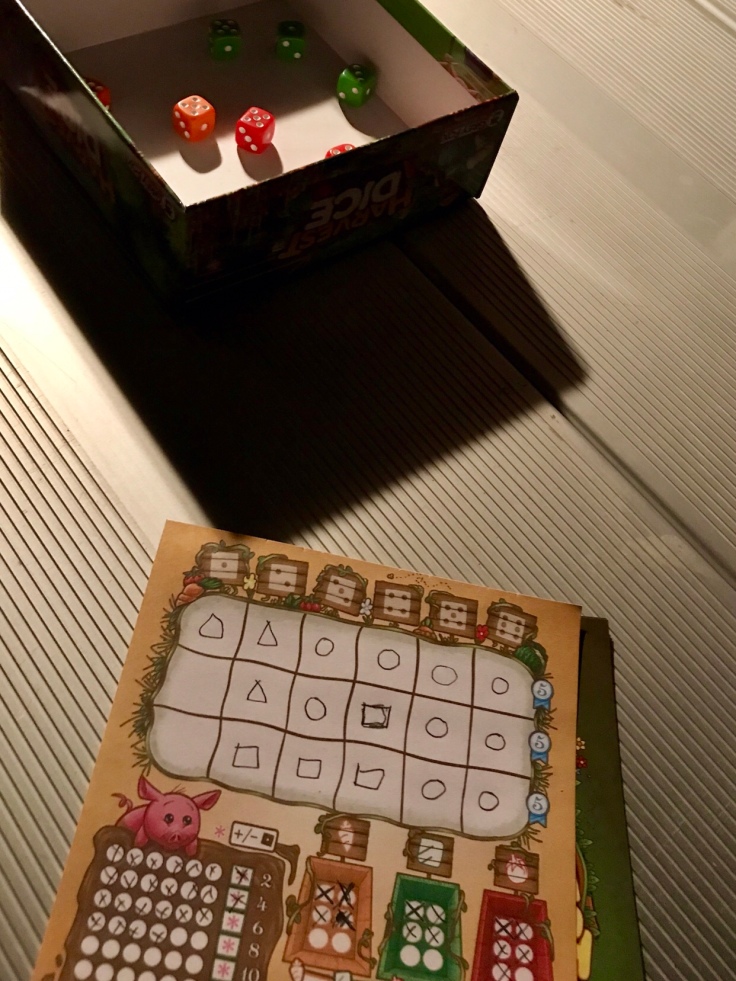 I have taught it to gamers with tons of games under their belt, and teen age scouts who have no familiarity with modern board gaming. (One scout in particular had played the Qwix style of roll and writes, so he picked up on the strategies in Harvest Dice right away.) In each session, the scouts wanted to play multiple games, and that is not always the case with my troop. This is a good example of a gateway roll and write game that can be enjoyed by long time gamers, too. .

If you are looking for a good roll and write game to introduce to your family, youth group, or game night, head on down to your friendly local game store and give Harvest Dice a try.