Some of the most beautiful art you will see on any European tour are not always the most obvious.

Sure, the Louvre or Musee de l’Orangerie or the Vatican Museum or even the Picasso Museum in Barcelona should be on the top of any visit of the great cities of Europe, but visiting the amazing churches and cathedrals in Europe will not only give you the gift of beautiful artwork on the walls but also beautiful artwork in the windows, too.

When it comes to unusual themes for a game, however, a game about creating stained glass windows that can rival these gorgeous picture views would seem to be pretty high on the list. But, if your game group likes relatively simple abstract games with beautiful art and plenty of replayability built in, plus brain burning decisions that get tougher as the game goes on, then Spice it up! with Sagrada from Floodlight Games.

Sagrada is an abstract dice placement game for one to four players that plays in about 30-45 minutes. I have never played the solo game, but I have played multiple times at all other play counts. Sagrada was designed by Daryl Andrews and Adrian Adamescu, and was first published on Kickstarter but is now available at your friend local game store or at on-line stores like Game Nerdz.

The game can easily be taught even to non-gamers in just minutes. Players will play ten rounds, each round drafting two dice per round to place on their stained glass window shaped tableau. The tableau is fitted with one of two stained glass window cards, each double sided, giving the player a choice between four windows to cover with the drafted dice.

The panes range in difficulty, but there is a scaling system. If you choose a harder glass to complete, then you will start with more “favor tokens” — beads which allow you to break the rules of the game using one of three randomly chosen “tool cards”. 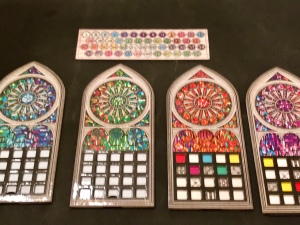 Players are scored based on three public objectives, which generally look for patterns of dice on your windows, and one secret objective, which gives points depending on how many pips of a colored dice (there are five colors in the game) that you played.

After ten rounds, count the public and private objectives, and add any favor tokens, and declare a winner!

I will not beat around the bush. Floodgate blew off the barn doors with this release. The stained glass window player boards are gorgeous, the dice are small but charmingly beautiful, and there are TONS of different stained glass cards and objective cards and tool cards so that just about every game feels different.

You can see that a lot of care went into this game, and it is one that I have had people ooh-ing and ahh-ing as they watch the game play. Even the box is beautiful — there’s no burly, surly European male staring at you blandly from in front of a church window in this game. And how about a little lagniappe, too — the game comes with a beautiful black bag with the Sagrada logo stitched on to hold your dice during the game. Nice touch.

When I brought this one out on one of our recent campouts, I will admit that I got a few raised eyebrows at the theme. We’re building stained glass windows? was the silent question that was asked. But immediately upon chucking the dice and starting to fill out the windows I could see the light bulbs go off.

Delicious decisions abound in this game, everything from the very first decision as to how hard of a stained glass window you will pursue to just when to time the right time to use the favor tokens on a tool. I love these decisions, and as you get more plays under your belt, you will appreciate how different and replayable the inclusion of all of these various cards really makes the game.

Plus, the end game is fantastic and in some ways, heart pounding. There is a unique thrill near the end of the game in making a decision that leaves one of your window spaces open, just hoping that the next dice roll or opponent’s choice leaves you just the right die to fit that space.

This game was definitely one of the bright spots of 2017 and easily made my top ten list. I am pretty sure it is at or near my most played list for that year and extending into this year, too. Since it plays great at two players, it is an easy call to leave on the dining room table and break out a game with my wife after dinner, or to throw in a backpack and play on a campout or at a party with casual gamers.

If there is any quibble, it is that for this type of game there is almost no limit to the insatiable appetite gamers will have for more cards, including stained glass windows and public objectives. Even with all of the cards included, the game could really use a few more (something that is being remedied in short order, as one would expect). Plus the box is rather large for the stuff that you get in it, which I understand helps with fitting on your shelf but does seem like a waste of space.

But those are minor quibbles for a top ten 2017 game. This game has everything: beautiful components, easy teach, easy set up, a great play time and a decent play count. (The designers are expanding the cards and play count with its new expansion.)

One thought on “Spice it up! with Sagrada”