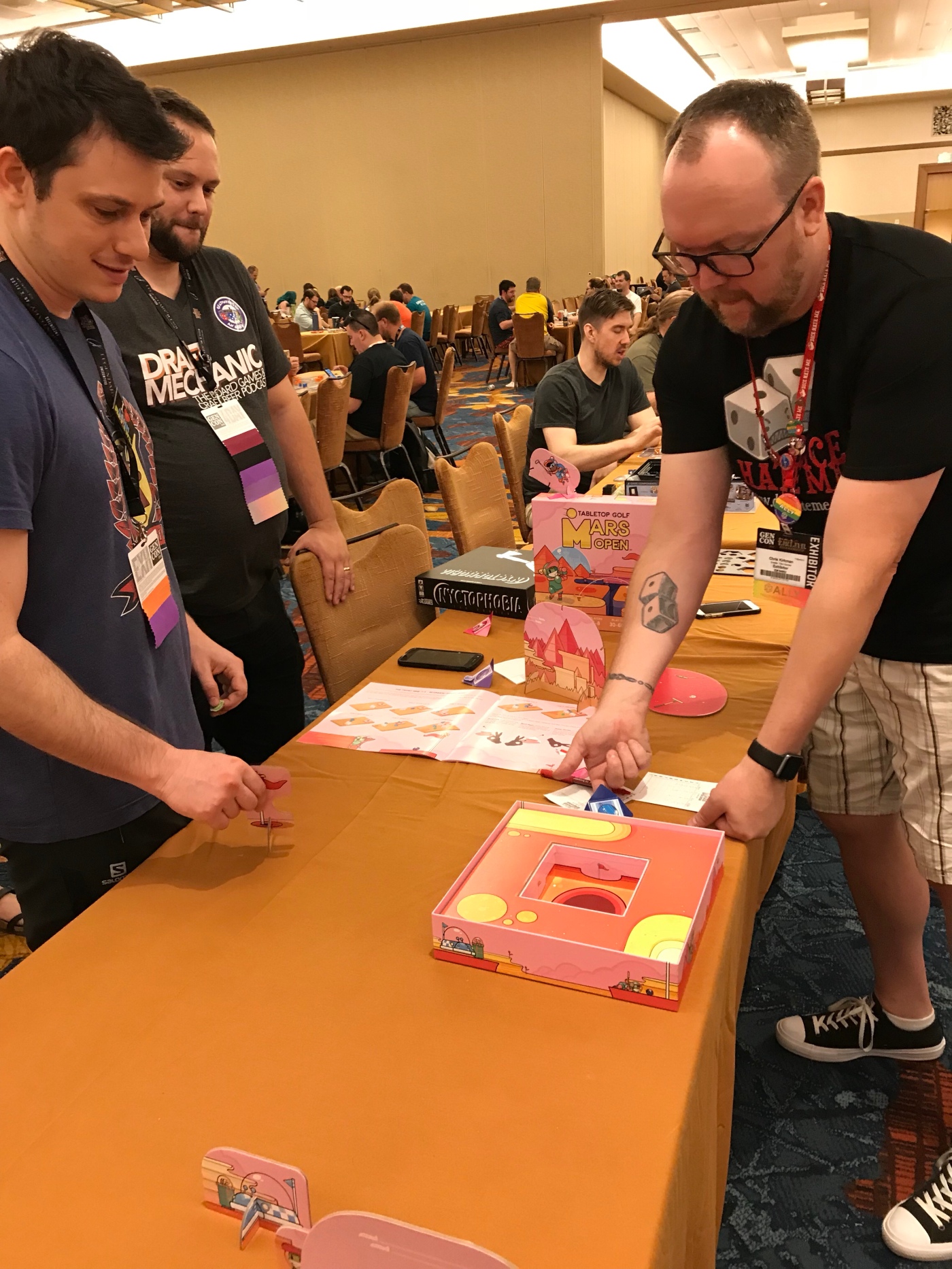 Hey board gamers, I am back with coverage of Day Two of our trip to GEN CON 2018. Yesterday, we talked about our play of Detective: A Modern Crime Board Game and a whole bunch of other games, so check that recap here. Today, we’ll talk about even more games!

Friday started out with my traditional First Watch breakfast with the inimitable, Sean “Mr. Sean” Jones. Sean is a board game teacher extraordinaire! Be sure to catch a demo of any game he is teaching at your next favorite con.

When the GEN CON doors opened on Friday, I was back in the Grey Fox Games booth for my demos of Superhot, an interesting one to three player take on the video game of the same name. One player shoot ‘em ups are not my favorite genre, and yet, I had a great time playing this board game adaptation. To really enjoy this game, you need to think about the cards as a visual representation of the video game, and everything else falls into place. In Superhot, players are given missions just like in a typical video game with various levels of difficulty. Complete all the missions and you win the game.

Each player has a small deck of cards with punches and dodges to use to get past the baddies. Unlike normal deck builders, when you “purchase” a card, it does not go into your discard pile to come back later as a useful card. Instead, it goes right into your hand. That makes thematic sense, right? Punch a bad guy, he drops his shotgun, so you would naturally pick it up and start using it right away. This is a game I would definitely play again, even solo.

In the afternoon, I had some scheduled events to attend. I had fun live tweeting the Dice Tower Live show (and even out scooped W. Eric Martin). With FFG moving their “inflight report” to Wednesday (where it should have been all along), the live show has become the place for the real “breaking news” of GEN CON, including Stronghold merging with IB&C, and Isaac Childress co-designing Restoration Games’ Dark Tower refresh. Based on crowd reaction, the least exciting announcement was Machi Koro legacy — sure it is from legendary designer Rob Daviau, but that is not a game I’ve ever enjoyed. Maybe the mind of Rob Daviau can breathe some new life into what is essentially a pretty boring dice engine builder.

Next up, I rounded up the North Shore crew plus Jeremy Davis, the Game Geek Ninja, and we headed down to the BGG hotness room. This was a favorite event of mine two years ago, and it did not let me down this year. If you’ve never been, you have to check it out next time you go to GEN CON. All of the hottest games are in one room waiting for you to play, and they limit the ticket sales to two hour blocks. 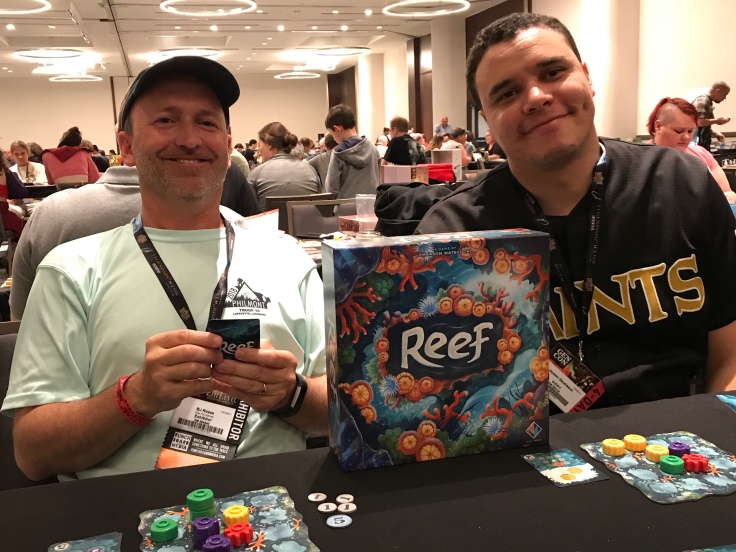 We chose Reef by Emerson Matsuuchi published by Next Move Games, read the instructions quickly, and jumped right in. I heard that it has been compared to Azul, if it were smashed up with Splendor. I’ve even heard some say it looks better on the table then either of those games. In my book, it is different enough to warrant owning all three. It definitely has the table presence of Azul, and it is an easier game to learn. The downside compared to those other two games is that AP prone players will really struggle in the back half of the game. 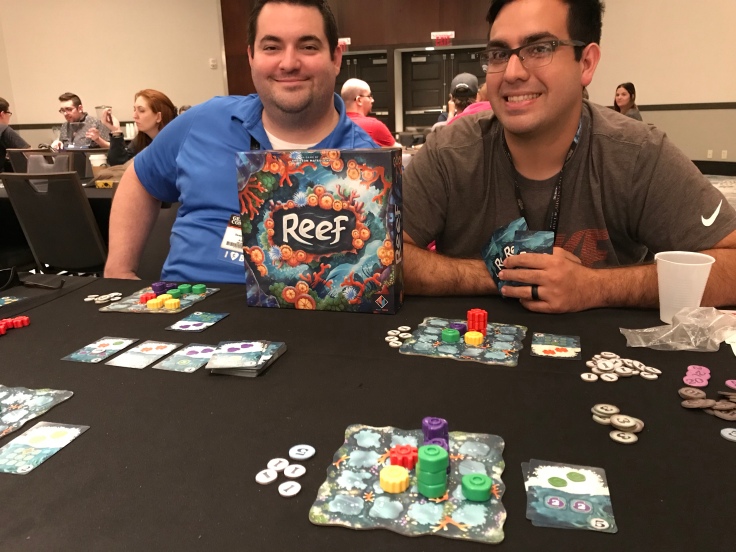 Reef takes maybe five minutes to learn, and we had so much fun we played it back to back. I’m impressed with the smooth pace, and the fact that each player explored a different, yet viable, strategy. I will have to add this one to the collection when it comes back in stock, as I think it is right up my wife’s alley.

Next up, Alex Goldsmith from the Dukes of Dice and I ran over to the Old Spaghetti Factory for the second annual Rolling Dice & Taking Names Strike tourney. Fans of the show know that the teams are divided up into Team Gladiator and Team Dice In A Bowl, and the winner declares the name of the game on the podcast for the next year. I have exciting news for all of you that see the theme shining through in this game, it is GLADIATORS IN AN ARENA for one more year!  Plus, Andre shined some light on the new release of this game in America. It will be rethemed to a space theme, and we should see it on our side of the Pond soon.

We met up with the gang from Draft Mechanic (Jake, Danielle, and Shane) plus some of the guys from Never Bored Gaming. Alex and I were seated at a table with Andre Maack, one of the developers at Ravensburger, the publisher of Strike, and he was a hoot! He dished out lots of stories about the popularity of the game in Europe. We also sat with Ed, a director from Toronto, who ended up hanging out with us and playing games all night.

Marty and Tony are the consummate southern hosts, and went all out for this meet up. We had a gift bag, great food, tons of door prizes, and even Isaac Childress showed up autographing Dark Tower posters!

After a full belly, we were off to the JW Marriott ballroom for another game night. In GEN CONs past, it was tough to find good spaces to game. Thanks to Jake and Danielle from the Draft Mechanic Podcast, we had no trouble finding an open table because they scouted out the giant ballroom that GEN CON rented out at the JW (and apparently, there were gaming rooms at other hotels, too.) The ballroom was every bit as large as soon of the rooms at other more “gaming” oriented conventions. We said hey to Ken from Geek-Craft, and started gaming!

Nyctophobia, designed by Catherine Stippell with art from Peter Hocken, published by Pandasaurs Games, was on my list to see anyway, so I was excited to hear Alex Goldsmith from the Dukes of Dice bought a copy. Nyctophobia has an interesting backstory in development, and is pretty unique — three to five players play “the hunted” and “the hunter”, with the hunted forced to wear dark sunglasses that no light can penetrate. Using only tactile senses and word descriptions, they navigate a maze while the hunter stalks them. Escape to a car waiting in the woods, and call for help, and the hunted win!

While Alex and the Draft Mechanic crew (plus Director Ed) played Ganz Schon Clever, I learned the rules. When they finished, I took the first play as the hunter, and chose a spooky scenario where they were all camping in the woods and an axe murderer was chasing after each player. Their options were limited: move, hide, or throw rocks in an effort to hit the axe murderer (or create noise to make the murder head in the wrong direction.) Danielle quickly found the car and radioed for help, but with one rock left, she took a chance — she threw the rock out of the car hoping to either hit the hunter or make enough noise to distract the hunter. Unbeknownst to her, poor Director Ed was standing right outside the car. She caught him square in the face with the rock, instantly killing him and leaving us all in an uproar of laughter at this unusual ending to a very exciting experience.

We had to play again, and since Jake had just finished A Very Important Meeting, Alex took over as the axe murderer. Not unexpectedly, this devolved into requests for Alex’s famously Friendly Shoggoth to appear. As the GameMaster and the Hunted, Alex was spooky, creepy, and funny all at the same time. We were all on different sides of the board, but Jake showed an amazing aptitude for mentally memorizing our movement and locations on the map. I followed his lead, quickly ran up the southern edge of the forest, and headed for the car. It was a close call, but we were able to call for safety and escape just at the last minute.

Afterwards, we discussed our thoughts on the game. They seemed to range from “fun” to “indifferent”, but I had a one sentence review: I absolutely loved my experience, but I’m glad it was Alex and not me that bought the game. Kudos to the designer for the intent and the result, but I think this will be very game group dependent, and I am not sure that it would hit the table consistently enough to purchase. Of course, if you have Alex as the hunter, do not turn down a game!

Our next game needs a story. Have you ever been invited to learn a new sport with a friend, only to have that friend destroy you in the first game? That was our night playing the next game. Jake brought out Mars Open by Dennis Hoyle, published by Bellwether Games. Jake is a big fan of the game, and even designed one of the Kickstarter backer holes, and I had always wanted to try it ever since Dennis was on the show. Chris Kirkman from Dice Hate Me Games walked by, and since he loved dexterity games, he joined the group for a quick nine holes. 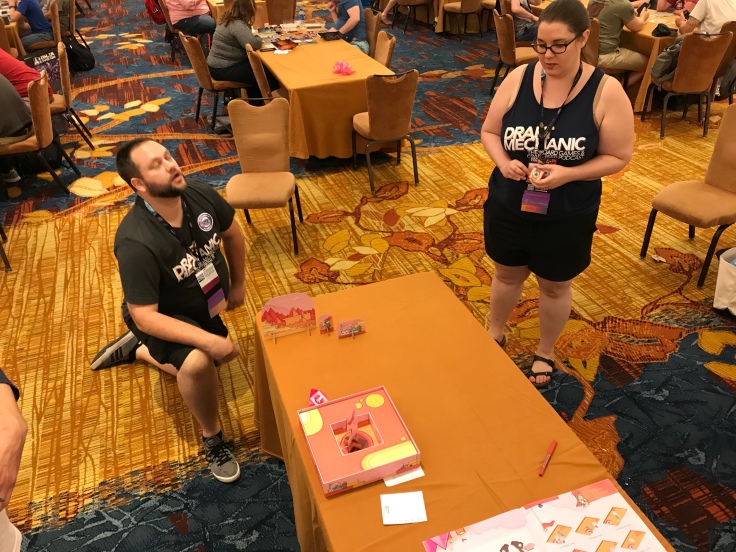 It did not take much to convince me. I love dexterity games — Flip Ships was in my top five games last year — and the design and presentation of this game did not let me down. Mars Open is just plain silly fun. Flick “golf balls” with your finger (just like middle school football games in class), utilizing trick shots along the way. Jake was a pro, and had three or four hole-in-ones, shooting a blazingly low 19 shots. Jack would love this game, and I’ll bet my scout troop would love it, too. Argh! Another game to go on the list for pick up after the Con.

We had time for one more game, and so we pulled out Tres Fute, the French version of Ganz Schon Clever. I picked up a used copy from my friend Oscar from the Valera boys. Alex knew the game very well and brought us quickly up to speed. If you like roll and writes, and especially do not need a theme, this game is for you. And if you like comboing dice rolls to give bonuses which beget more comboed bonuses, you will really love it!

For my first real game (I had tried the app twice without knowing the rules), I did not do so badly. I finished in third place, and even when I was losing, anytime I pulled off one of the combos, it was a very satisfying feeling. I think my wife will love it.

Well, that’s the last of the gaming for Friday at Gen Con. I had only one day left, so the next edition will be the last recap. Be sure to tune in to see plays of games that include a tongue twisting, gut busting riot that is the latest Oink release.