Hey board gamers, I’m back with my final installment of the GEN CON wrap up. You can read about day one and day two right here. Today, I am going to talk about Saturday, August 4th, my last day of the convention. 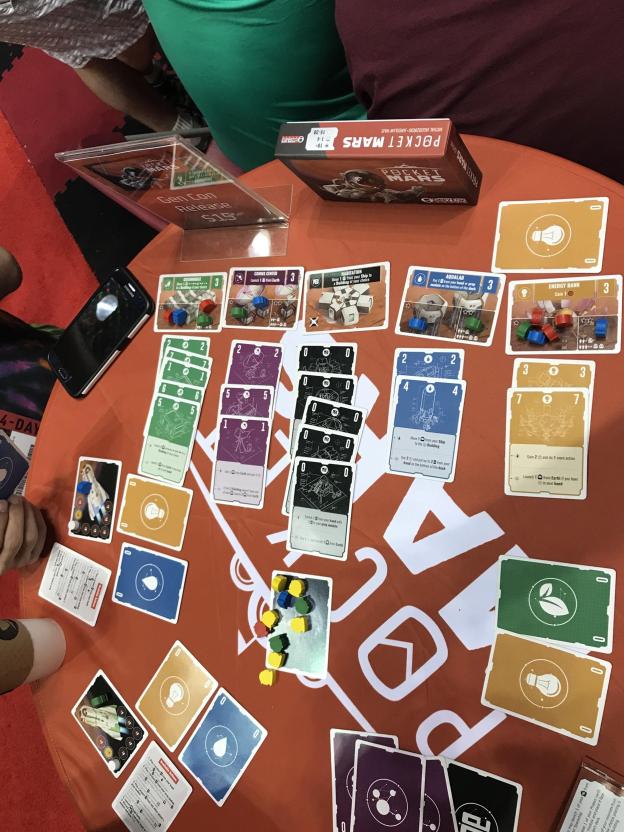 This was my last day with the Grey Fox Games demo team, and it was a doozy. My first game was one that I was really excited to demo. Pocket Mars is one of those small box, yet big-game-feel releases that I am always searching for, and it did not disappoint. Players launch astronauts from earth through space to the Mars, and compete to develop the colony better than the other players.

As scientists, we utilized a two hand / two card system to develop the colony. We used two cards in our hands to play immediate actions, while we used two face down cards on the table representing our “project modules” to send to the Mars colony for the special actions represented by each part of the colony. The main scoring works as part of an area control mechanism. At the end of the game, only astronauts on the ships and colony areas will score points for the players. The twist is that each location only the colony has two areas, one that can hold unlimited astronauts, but scores only points points per astronaut, and the second smaller area which can hold only one or two astronauts (depending on the player count) but for double points. Therefore, players will jockey for position on the planet, bouncing their astronauts (and those of the other players) around using the special powers of the locations.

After I had my fill of Mars colonization, it was time to bash some zombies. Run Fight Or Die Reloaded is on Kickstarter right now, and I was in charge of the afternoon demo. I’ll be honest and say that I was not that excited about this game, as zombies are not my favorite theme. The play of the game seemed too random for my tastes, but once I played a few times, I quickly saw the appeal of this game.

Run Fight or Die is one of those beer and pretzel games that are easy to teach, and allows players to use different strategies to win. I never played the original, but the developer, Josh Liebcoweitz, from Grey Fox has added a couple of cool twists. First, players each have special powers that are triggered by comboing the dice rolls. Second, the “flee” mechanic has been upgraded to allow players to push zombies not only outside their town but onto the other player’s areas.

That left some very delicious decisions: should you focus on just bashing the zombies in front of you, or should you spend your time researching locations and grabbing items to boost up your character? Or do you push as many zombies from your board to the other players’ towns to give you time to zero out your board? And what do we do with the big, bad mutant? All of these strategies are viable, and there are plenty of laugh out loud moments in the game. 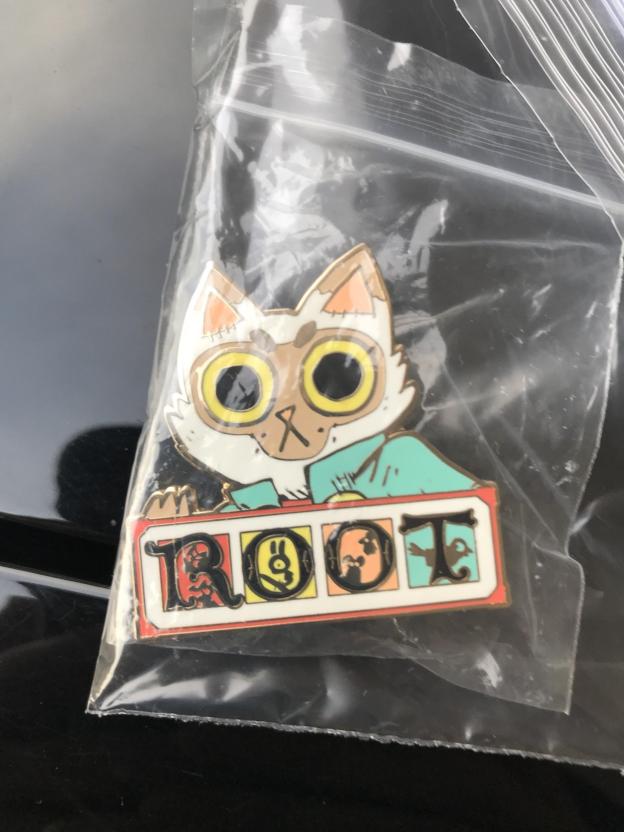 My demos finished, I had just enough time to visit a couple of other booths. I ran by Leder Games, and grabbed a copy of Root and its expansion for my buddy, Dave Dugas. Our group loved Vast, but the rules and the asynchronous make it hard to bring to the table. It looks like Cole Wehrle and his team have streamlined the game, and gave it a cool woodland-animals-on-steroids theme and artwork. Can’t wait to try it for myself.

The last booth on my list was probably one of my favorite booth visits. I passed by Restoration Games’ booth on an invitation from Justin D. Jacobson, and not only was he there, but I also finally got to meet Rob Daviau. Justin was on the Gumbo Live! show earlier this year talking about Fireball Island, and we even played Magic Maze together at Dice Tower Con, but I had never met Rob before.

Both of them are as funny in person as they are on board game media, so it was a great visit. I walked away with my coveted new Downforce racetracks and a promo card, and I’ll be playing and reviewing them soon.

After a quick dinner with Jeremy the Game Geek Ninja at the food truck area, we headed back to the JW. Our plan was to meet up with the North Shore Krewe and Mr. Sean for some late night gaming. We were all in the mood for some quick playing, small box games.

While waiting for everyone, Jeremy and I played Ancient Artifacts, a roll and write game by Derik Duley. We have both played it many times before, but found out we each had been playing separate, minor rules wrong. With the rules down, we played a quick game but after three days of no sleep, we were not making our best decisions. Jeremy scored seven, and I scored only thirteen points for my lowest score in a long while. That game is hard enough without having Late Night Con Brain! 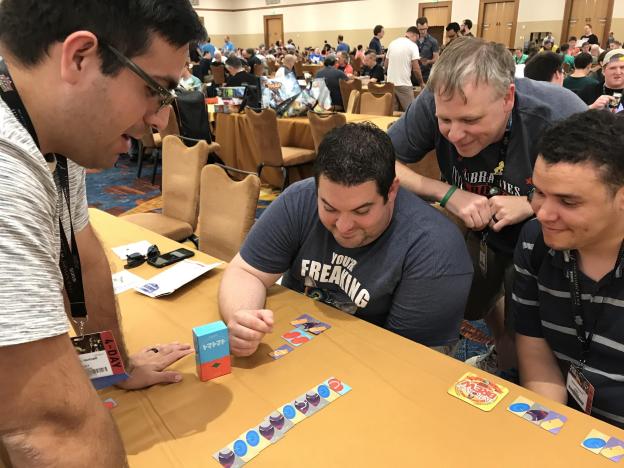 Next, I broke out that Oink Games release I teased in Friday’s post. Tomatomato Is a quick, light, tiny box party game that is perfect for late night fun. Players draw random tiles, and all but one have all or part of the word “tomato” written on the cards. Our job is to take turns making longer and longer sets of tiles and then saying the words in order FAST! Make a mistake, and the other players get to try and grab a tile for set collection end game scoring. 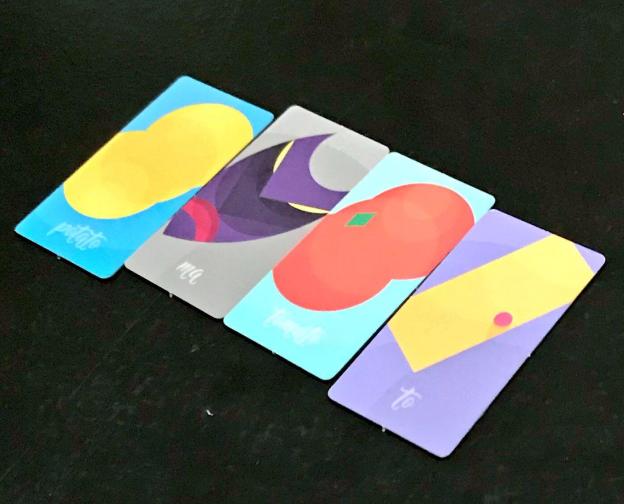 What a crazy game and unique concept. As the list gets longer, it is harder and harder to think fast and pronounce the nonsensical string of words correctly, especially when you randomly pull a reverse card, and have to reprogram your brain. I purchased this one and I’m so glad I did because it is a perfect game for our beer and board game night with the Krewe. Plus I think it will be fun to play with the family at Christmas time.

For the last game of the con, my buddy Sean Jones taught us Greedy Dragons from Evil Hat Games. This is a review copy that the designer asked me to play a Gen Con. We played six players in a 3 x 3 team format that Dan suggests. Greedy Dragons is all about players and teams trying to steal as much treasure as they can from the treasure horde and/or other players, by playing cards

I’m not one for math games, and at the end of a con, my brain is pretty fried. That is a disclaimer as to why i need to play Greedy Dragons again. I did like the team format; trying to figure out which cards would help me or hurt the other team was a cool exercise. When we played a card last that put the screws to the other team, it was A high five moment. I was not a fan of the downtime while waiting for players to math out their moves, but I think i would like the pace of a two v two game better.

And that’s a wrap for Gen Con 2018. Frankly, I was a little worried early in the Con. It’s tiring and crowded and intimidating, and I was telling myself that this might be the last one. Then, each night I met up with friends, old and new, and it renewed my interest in coming back. Looks like I will be back in 2019…

So how was your Gen Con? Did you play, buy or window shop — or all three? Let us know in the comments below or hit me on Twitter @boardgamegumbo.