When I left Mamou to move to Lafayette, one of the things that I left behind that I still miss is my occasional visits to the next door Tuesday night poker game. Guys I grew up with in high school meet every week to cook a good Cajun meal (my contribution was usually meatball stew with roux and homemade bread on the side from my wife) and compete in a friendly game of various games of poker and bourre’.

Of course, there was not much board gaming back in Mamou, mainly just me and my former brother in law playing endless games of Battle Cry and Memoir ‘44. So one of the joys of moving to the bigger city was finding like minded people who enjoyed the same kind of hobby board and card games as I do.

But, a waft of nostalgia slowly sails under my nose any time I see the hint of a poker mechanism in a new board game. I am definitely on the lookout for a game that combines cards and a board with the poker hand mechanic to knock me off my horse. Does your game group like poker or other ‘games of skill’? Do you like themes that are different?

Well then, Spice It Up! with End of the Trail from Elf Creek Games, designed by Mike Hinson.

End of the Trail is a short thirty minute tile and card game where up to four players compete as prospectors searching for the best gold claims in the foothills, canyons and mountains of the local area. They’ll bid on available actions (represented by themed but standard playing cards), and use the cards that they win in the auction to ‘prospect’ for gold nuggets AND build the best poker hand after three rounds of prospecting.

Players each are assigned a prospector, three tents and a camp in their favorite color. The board consists of a random grid of landscape tiles of various values. Players will get a hand of poker cards of standard values, a few of which also have special powers, and will use part of the hand to move around on the tiles trying to lock down the card with the highest nugget value without tipping off the other players.

There are two types of claims: tents and camps. Each player only gets one camp, but once placed, no one can disturb that player’s claim, while tents can be moved around by other players using special actions on the cards they play.

The players have three rounds to prospect for gold, and at the end of each round, they will move some of the cards they used to stake out their claims for gold to their end-game poker hand. If you like push your luck games, then you will like this twist on claiming of the tiles.  End of the Trail dares you to keep moving your prospector to tiles with higher chances of more gold, because if you happen to move to a tile with a lower value then the one you are on, you will “bust” and have to take the lower claim.

At the end of the game, the player who has established the best poker hand will have one more chance to claim a tile, as long as it is one of the lowest value tiles remaining. Count up all of the gold that has been discovered, and add a few more nuggets the value of the poker hand, and declare the best gold prospector as the winner! 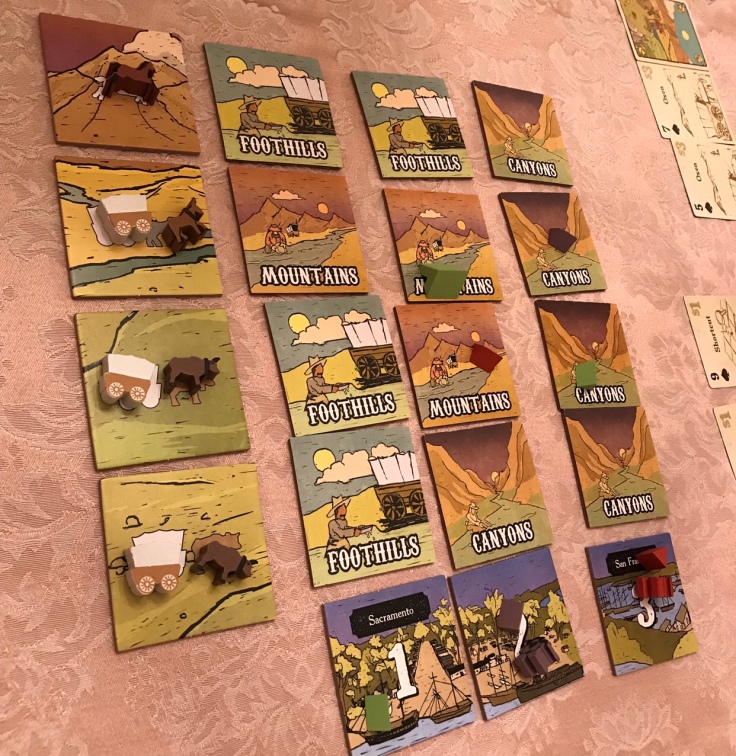 The folks at Elf Creek Games were gracious enough to provide us with a Kickstarter version of the game for review. But, the differences do not affect game play at all. There’s a crazily designed box sleeve, that includes real working wagon wheels that you attach to the outsides — a cool touch but not very practical? Wooden meeples representing the horses, mules, and oxen that are used for travel are also included, but these are just for decorating the travel tiles and do not change the game at all. Finally, there are gold nuggets and an upgraded dealer token that looks like a mining plan — as you can probably guess, those are not needed, either. But, it does put a little shine on the game.

The standard components are nicely done. The prospecting tiles are very thick cardboard with clearly defined type that states what level they are. Each player gets a colorful set of wooden pieces (prospector, three tents and an oversized camp). The poker cards themselves are well designed with a cool Old West rustic theme.

On the downside, there were a number of complaints in the Krewe about the artwork itself on the game box cover and in the game. I was kind of neutral to the look, but there was a lot of negative reactions to the art style. I can see the argument that the colors are too washed out and the artwork a bit too cartoony to fit the theme of the game. Plus, the color and graphic choices for the player cards is downright questionable. The tiny type, washed out brown colors, and wild west typeface contribute to a very difficult time for some players to even use the card.

Another downside was the joker cards. There was a lot of friendly discussion in the krewe as to whether we should use them as wild cards, or just as the special actions contained on the cards. The rule book waffles on this debate.  It would not have bothered me if the designers either excluded the cards from the game, or said in the rules a blanket statement that they are not wild. If players want to house rule a “wild card” like they do at their own Tuesday night poker games down at the Baskin Robbins, where they play for little purple spoons and sixes, eights & jokers are wild, then that’s on the players. 😉

On the bright side, the rule book (other than the joker debate) is above average, and we only had a few questions that were quickly cleared up in BGG forum responses we found. 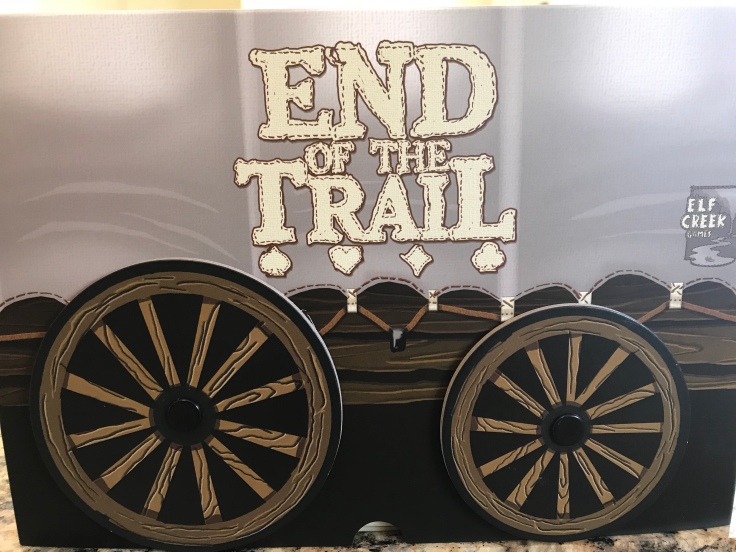 I told you I’ve been looking for a great game that utilizes the poker mechanic, and I think I am still looking for that game. That is not to say that End of the Trail is not fun — in fact, I had a lot of fun playing it!  In fact, End of the Trail is one of those rare games that I have had more and more fun the more times I play, which unfortunately is not something we can always say about every game we play at the Gumbo.

Here’s the reason why my enjoyment rises each time I teach the game to new players, but where End of the Trail falls shy of being a great game — the multi-use cards are REALLY multi-use and take some getting used to:

Whew! That’s a lot for a little thirty minute game, and probably knocks it out as a filler game. There’s just a lot to explain with the cards for End of the Trail to be considered in my mind as an easy game to throw up for a thirty minute filler.

But, the depth of the game play with the multi-use cards rewards repeated plays. Once a player can naturally play the game without the rules clogging up the game play, the game moves VERY quickly and there’s a lot of bluffing and guessing as to the poker hands and the prospector plays.

Based on the above, you have probably figured out that this is not really a filler game, and probably not even a filler+ game. It is closer to a One Hour Wonder, but one that takes half the time. If you are like me, and you love it when your shorter games have some heft to them with juicy — but quick — game decisions, then you will probably enjoy End of the Trail. It has wonderful stare down moments, especially during the auction part. I love watching players glance furtively at each other’s stack of face up cards while trying to decide whether to throw away that “horse” card for the $1 they need to buy the current auction stack.

If there is a downside for players, the common complaint I heard is that the excitement level in the game does not match the theme.

For me, the auction alone is enough excitement that balances out the slower pace of the rest of the game, but I understand some of the comments.   When I look at the game as a whole, the great production, push your luck mechanics, poker hand management, better than average rule book, and quick but juicy auctions all combine for a — dare I say it — winning hand.  I liked End of the Trail. It’s a good game, with an ambitious design packed in thirty minutes, that maybe could have used better art to push it to the next level.

So that’s End of the Trail from Elf Creek Games. Have you played it? Let me know if you like the multi use cards combined with the poker elements.

One thought on “Spice It Up! with End of the Trail”