Spice It Up! with Coimbra

It is almost Essen Spiel time! We will take a look at some of the hottest games coming out at Essen that we are excited to play in an upcoming blog post. But why wait for November and beyond to have a great game delivered to your doorstep? There are some great euro titles that have already hit American shores and should be getting some love at your game nights.

One of the best games I have played all year that is available in America right now, is a beautifully produced dice drafting and card market purchasing game from Eggertspiele all about one of the hidden gem cities in Portugal. Do you like games with beautiful art, a solid design pedigree, and a modicum of theme — just barely enough to squeak by — mixed in with just a touch of chaos?

If you do, then Spice it up! with Coimbra.

Coimbra, from Eggertspiele, a dice drafting and placement game with stunning art, is designed by Virginio Gigli and Flaminia Brasini and was one of my most anticipated games at GEN CON 2018. It plays two to four players in about an hour and a half.

I had already played a dice drafting release by some of the same designers, Lorenzo Il Magnifico, and enjoyed that game immensely. Is Coimbra as good as Lorenzo, but novel in its game play? Is it a fresh take on the dice drafting genre?

Here’s the thematic pitch: It is the age of discovery, and one of the great cities of Portugal, the beautiful port and university town of Coimbra, is on the forefront. Players are the head of the great houses of the city, and will spread coin, protection and influence among the politicians, mercantile class, religious leaders, and the intellectuals of the day in order to help Coimbra grow and prosper.

In all fairness, the theme of this game is the weakest aspect. Throw the theme out the window. Coimbra is pretty much a beautiful kaleidoscope of colors filled victory points ready to be discovered. I could give you more spiel from the box about all the thematic elements, but in all honesty, this is a pretty themeless euro.

But, for once, do not let the theme (or lack thereof) scare you off, because this is one beautiful puzzle to be solved. Players will take turns rolling and choosing dice, and those choices, those delicious decisions that agonizingly appear turn-after-turn are the heart of the game.

There are other games that have a similar mechanism, but for me, the multi-use dice were a revelation and an exciting part of the game. You draft the dice for so many different things: for their colors, for the pips, to help in getting ahead in the order of turn play, to get income in the form of increasing the four tracks, and don’t forget, you can also set affect the game turn order as well as the bidding turn order, too.

Players will take turns drafting one of five different colors of dice, one for each of the four scoring / influence tracks (and one as a ‘wild’ color), and then immediately use them to bid for the right to bribe the locals for influence (in the form of cards). Those cards represent ways to score points, or break the game, or get end game goals, or even collecting sets of unique badges for even more points.

They can also help you get money or shields, which are needed to finance voyages for yet even more ways to score end game points. And let’s not forget that each player has an adventurer that will go from monastery to monastery getting influence from the church leaders (and scoring even more and more points) along the way.

It may seem like a lot, but the game is surprisingly easy to teach, and plays very quickly. 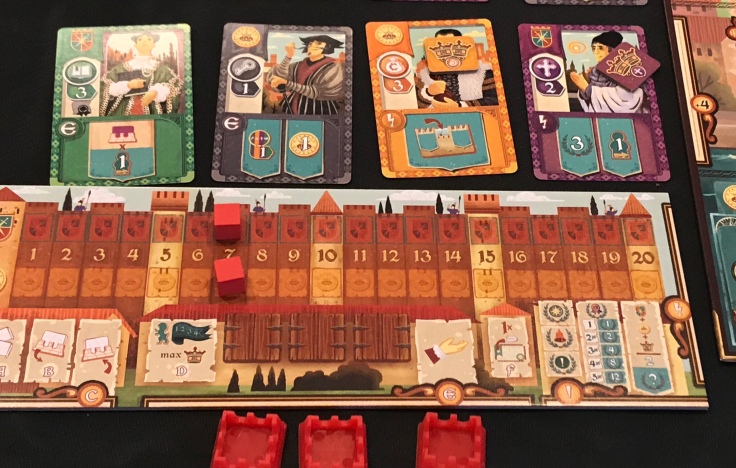 This is where Coimbra shines even more. The art from Christopher Quilliams is fun and whimsical, and captures a feeling of exploration that can help back critics down from any criticisms of the lack of theme. Coimbra does not feel like your typical dry euro, and I think it is the artwork that helps liven up the game play.

The dice are big and solid, and the game comes with three cool little castle like dice holders for each player in that player’s colors. The castle dice holders are a great touch in the game, and they help you to quickly determine which player has placed a bid ahead. 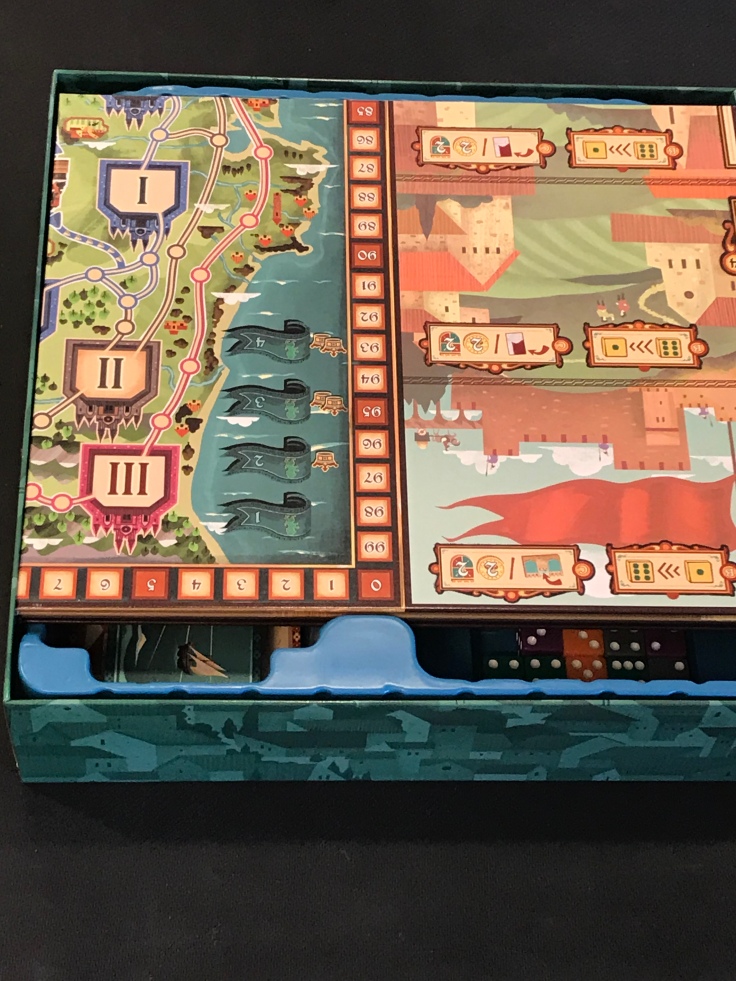 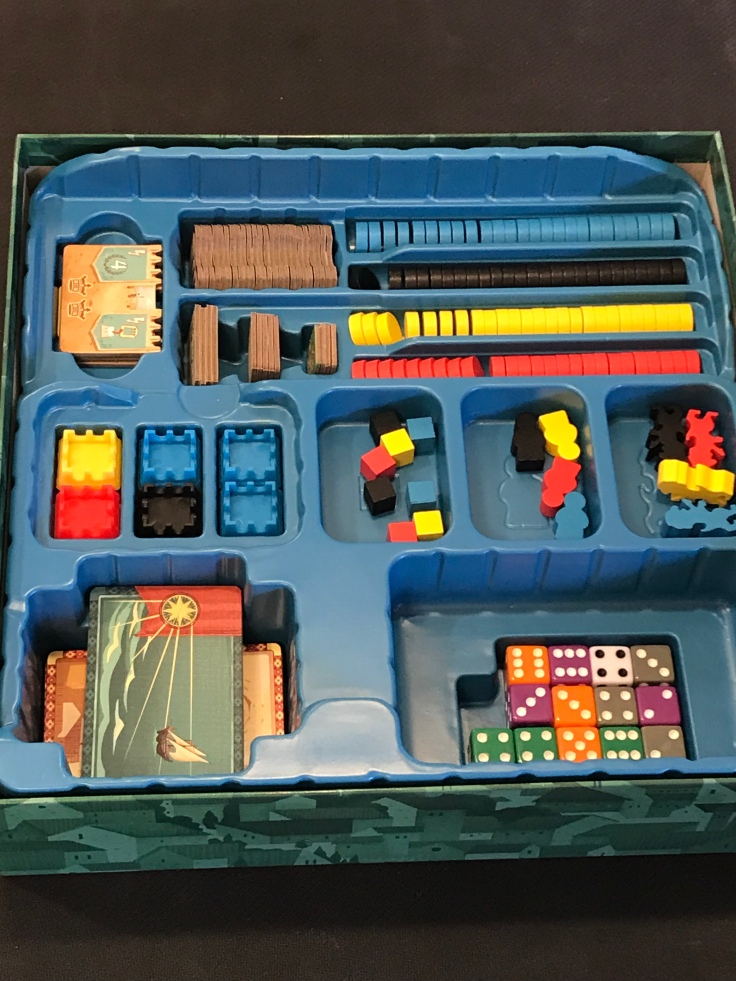 On the down side, while I am a big fan of organizers, the Coimbra insert seems a little over the top. The company provided an organizer that literally fits everything in the game. The problem is that it is much easier just bagging some of the smaller pieces than loading them into the slots and taking them out again. Your mileage may vary there, but we only use about half of the slots in the plastic organizer.

Overall, Coimbra’s production is pretty close to perfect, including an excellent rulebook. I wish there were little player aids included in the game that showed you the different tiles and cards, but that’s just a little complaint. 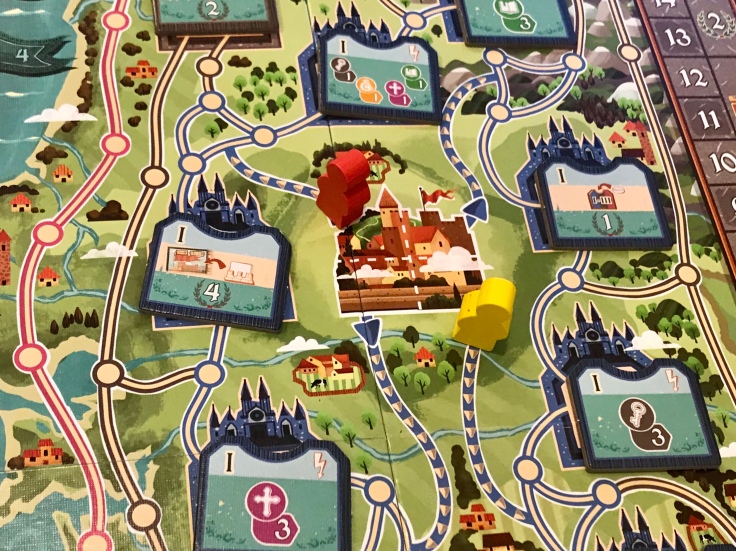 Ah, the age old question that we try to answer each week here on the Gumbo. Is Coimbra any fun, or is it just another themeless but pretty Euro? Can a game that essentially measures your ability to efficiently draft dice, bid on cards, and maneuver your scoring tracks up and your monastery wanderer around the board exciting?

The answer is a resounding yes (as if that were any surprise by the above descriptions.)

This is the most streamlined, exciting dice drafting game I’ve played. Since the dice are multi-use, during the first few seconds, players may be overwhelmed by the various choices. But, then something wonderful occurs. A player’s eyes will gravitate to the side of the board with the various levels of tiles and cards, and naturally start to think about which one looks interesting. That quickly leads to a decision on the color and strength of the dice, and away that player goes.

Since players are only drafting one die at a time, the decision tree — while abundant — is not overwhelming. Go for crowns to ensure a better player order? Focus on one of the colors to ensure the most points at the end from scoring track? Push your wanderer around the monastery board? Grab one of the very powerful tiles? Or just get the best card in the best color for the best price? All of these are fun and juicy decisions, but the analysis paralysis that haunts other games just does not seem present here, because players are choosing the “better of a bunch of good options”.

In Lorenzo il Magnifico, similar decisions had to be made, but players also had to be wary of the power of the Church. A player could be severely punished by the wrong choice of die. Lorenzo punished players for not choosing “the best option” on every die choice. 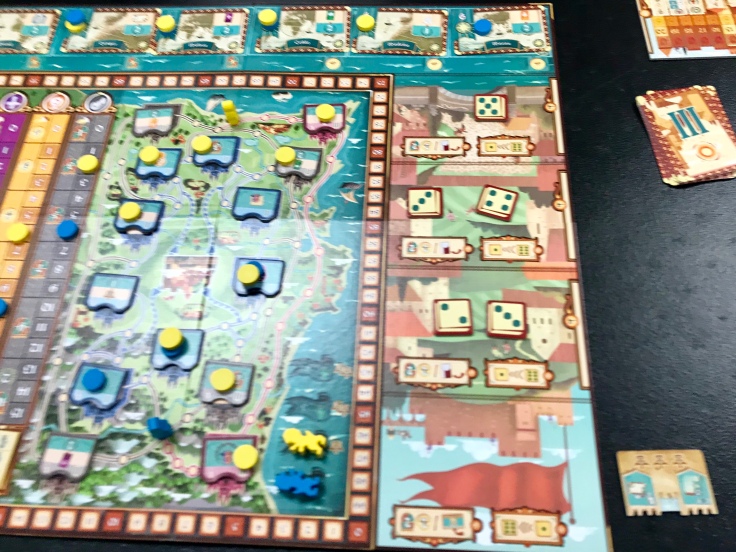 And yet, even with the forgiving nature of the design of Coimbra, there’s still tension in the decisions and game play, but it does not feel as stressful as other games of this type. Although the players will always have multiple options, in my plays, I have felt like the analysis paralysis that multiple decisions usually bring out is not present in Coimbra which contributes both to the speed of play, but also to the enjoyment.

In a year that seems to have more and better options in the gateway category of Euro games, Coimbra stands out among the other entries medium weight one to two hour game category. It is an early contender for best euro game of the year. So far, it has gone over like gang busters in the groups that I have played, and the variability is off the charts unlike a lot of games in this genre. I love the random set up of the monastery tiles, and the shuffling of the starting cards and scoring track tokens and expedition cards are contribute to high replayability.

As you can see, I give Coimbra two thumbs way up. If you see me at BGG.Con — grab a table, and let’s play!

One thought on “Spice It Up with Coimbra”