Hey board gamers, BJ from Board Game Gumbo, back with more stories from the Krewe de Gumbo’s recent trip to BGG Con Fall 2018. Click here if you missed the first installment.

BGG Con runs five days — Wednesday through Sunday — but has an unusual but welcome policy. The vendor hall does not open until the second day, Thursday. Since I signed up as a booth volunteer for a couple of different companies, my “all day plays” from the previous blog post were cut down significantly over the next few days. But, I still got some great games in.

First up, I joined my mates at the Kosmos booth for a moning filled with demos of some of their newest games. My primary role that day was teaching Mercado, a new game from Rudiger Dorn, most recently of Karuba fame. Mercado is a bag draw game where (as my friend Tom explained) players seek to spend as much as money as possible, on stuff they don’t need, to impress friends they don’t like. The game is designed for two to four players, and plays in less than an hour. The player who scores the most amount of points buying these impressive pieces of jewelry, art, etc. wins.

It has a few interesting mechanisms. First, it is a race around a track, where players can control how fast they move through their item purchases, random card draws, and jump spaces on the board. The players each have a bag full of various types of coins, that can be used to purchase the fancy items available in the market, but the bag also contains counterfeit coins that clog up a player’s ability to buy more stuff. Managing the contents of the bag while focusing on quick movement around the board is the key to victory.

I had fun teaching Mercado, and the Kosmos booth was busy! The morning flew by, but soon it was time to check out the rest of the exhibitor hall. I had time for three visits that day.

First up, I met with Danni at Renegade Games to get a look at the Q4 2018 lineup. Danni gave me a full walk through of their successful stay at BGG Con. Renegade had already sold out of both the Altiplano expansion as well as Architects of the West Kingdom, and it was only day two! But Danni was happy to talk me through Gunkimono, an interesting area control and territory building game designed by Jeffrey Allers. It looks like one of those “one hour wonders” that will play up to five players — your pretty standard euro requirements — and has some interesting art.

She also showed off the new upgraded artwork with Arboretum’s enhanced edition, which really pops off of the box cover and cards! I can see why the game has been all over social media since the new edition came out (and this time, for the right reasons.)

Up next for Renegade in 2019 — a new Stephen Feld game based on the United States election of 1926 (maybe not the most exciting theme I’ve ever heard). I’m hoping to have Danni come on Gumbo Live! in Season Four to talk all about it. 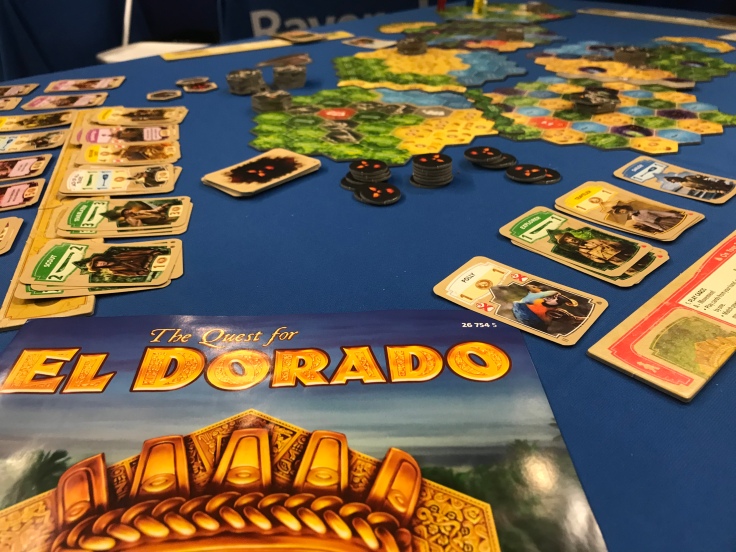 Next, I stopped by Ravensburger, for a meeting with the Mike Mulvihill, one of chief US game producers for the company. Mike was showing off two games: the Quest for El Dorado’s new expansion, Heroes and Hexes, designed by Dr Reiner Knizia. Quest was for some people a legitimate SdL contender (I was less enamored), and Heroes and Hexes brings more of the fun. Some of the highlights include new hero cards and character cards in the “market”, which allows for quicker movement, exploring caves, and scientists to gain more cards. The most interesting new mechanism for me was the new curse tokens. These can slog up a player’s movement and force even more player interaction. Mike said the game runs about 5-10 minutes longer with the new expansion, but is much more interactive.

He also showed off what he said was the “hot” game of Ravensburger’s demos, namely the new Stephen Feld game, Carpe Diem. Mike said it is appropriate both for new gamers and veterans, too. I liked a lot of what I saw in terms of the game play aspects, but, wow, the board was busy and not very inviting. Just once I would like Feld’s game producers take up Ian O’Toole on his standing offer to work on a Feld game, because his game designs could really use a refreshed look.

Finally, I stopped by to see Stephen Buonocore at the Stronghold Booth. Stephen will be on Gumbo Live! in a few weeks, and we’ll have plenty to talk about on the show. I did get to see a quick demo of Spring Meadow, the new Uwe Rosenberg tile laying game and part of the trilogy with Cottage Garden and Indian Summer. Spring Meadow might have the most interesting game play of all three, as the game pace is very quick, and the scoring very intuitive.

I also convinced Bradly to pick up a copy of Paper Tales’ new expansion, because Paper Tales is a great little filler that we have been enjoying a lot on Gumbo Game Nights.

And now…back to the game plays! At the Virtual Flea Market, we met up with two friends of Gumbo Live!, Nick and Andre, former New Orleans area guys who live in Texas now. Carlos had a copy of Strike (Gladiators In An Arena!), and so while waiting for the VFM to start, we set up a quick game. I had not played Strike since the Rolling Dice & Taking Names tourney at Gen Con, and not much has changed. It’s still an addictively fun but vapid dice chucking, luck fest. (Or a skillful challenge pitting ancient warriors against each other in a grand arena, your choice.) I’m pretty sure Carlos outlasted all of us for the victory. After that, it was Grey Fox Games time. Alex Goldsmith graciously agreed to be a guinea pig for my first ever live broadcast of a game play. I had been following the Reavers of Midgard Kickstarter campaign with interest, and wanted a play of it anyway, so why not try it out live in front of millions (well, hundreds) of people? Through the help of some friendly BGG staff, we set up our cameras and lights at the booth, and proceeded to play the game with almost no hitches. Well, okay, there was one big hitch — for some reason my microphone was picking up the camera (my iPhone) mic, and we had some really bad feedback loops during the first half. Thanks to the Name Father (Steve O’Rourke, producer of the Gumbo Live! broadcasts) and Matthew Ward, we made a couple of quick adjustments, and the second half came out a lot better.

Reavers of Midgard is another game in the Midgard universe, a close cousin to Champions, but in my mind a completely different game. This is more of a dice and worker placement usage game, with the viking theme overlayed. The game plays very quickly, and the decisions are delicious. I especially like the follow mechanic that is in the game where the initial player who takes an action gets the best action, but every other player has a chance to take a lesser action. Plus, the artwork that we saw is top notch. I’m glad to see that Reavers funded with a bunch of stretch goals knocked out, because I really enjoyed my play.

After the mostly successful broadcast, we moved back to the main gaming area and grabbed Jeremy “Game Geek Ninja” Davis for a quick game of City of Gears. My copy had not yet arrived at home, so it was nice getting a good solid teach from Alex. He had another event to go to with his friends from the ABQ, but stayed long enough to get us started. Ninja had the combos running on the gears right away, and I struggled to catch up (and never actually did.) But, I love combolicious type games, and City of Gears never overstayed its welcome. I can’t wait to play my copy.

With another big day of demoing quickly approaching, we called it a night. Come back later for DAY THREE: Fishing for Coins in Portugal!