Board Game Gumbo is pleased to present a new review from Sagan Ezell, fellow game group member.  We love expansions, and we were excited to get a reviewer copy of GoodCritters from Arcane Wonders.  We turned to fellow game group member, Sagan, who graciously taught us the game.. Sagan is an omni-gamer from Lafayette, Louisiana, and helps run the Southern Board Game Festival. Here are his thoughts on the game. You can reach him on Twitter @SaganEzell

So there you are. The heist went off without a hitch, and now a big pile of loot sits in the middle of the table, ready to go right into your pocket. You didn’t pull off this job alone though, and every honest criminal that helped out wants their “fair” share of the spoils. It might be tough to figure out what a “fair” share is though. Ana picking those locks was the only way into the vault, so she thinks she deserves the biggest split. Bruno made sure to take care of those security guards though, so he wants the biggest share too. But, of course, you did come up with the whole plan, so surely you should get the biggest split and let those others fight for the scraps. You better hurry up and figure this out though, because once the fuzz shows up it’s all over, and you can only keep what you carry out.

GoodCritters is a negotiation game published by Arcane Wonders and designed by Fabian Zimmermann. It is a reimplementation of his older game Tiefe Taschen, and while there are some mechanical changes between the two, the biggest difference is the theming. While the older game focused on the machinations of corrupt politicians, GoodCritters puts you in the shoes of an animal mafioso, eager to sweet talk, manipulate, and betray the other members of your critter crew after a successful heist.

The core of the game is a simple one. Each turn, the Boss will draw loot cards from a facedown stack, and then divide up those loot cards in whatever way the Boss sees fit. The Boss can try to make the value as even as possible, or cut certain players out entirely, or even keep every single card for themselves if they want to. Any way Boss wants to split the cards up in GoodCritters is totally legal. Just because it’s legal, however, doesn’t mean that trying to keep all the loot for yourself is the best idea. After each split is proposed, every player will choose one of 5 cards in their hand to play facedown as their action for the turn.

The next potential action is the Skim. If you choose to Skim, you can take the top facedown loot card from the deck and keep it for yourself. The catch here is that all cards are resolved in turn order, and only one player is allowed to Skim each turn. This means that the Boss is guaranteed to Skim if they choose to do so, because they are the start of the turn order. This also means that it gets tougher and tougher to Skim the later you are in the turn order.

The final two actions available to players are a pair: Rob and Guard. During the action selection phase of the game, players are free to play cards facedown, change their selections, bribe other players, negotiate, and threaten others. By placing your character standee in front of another player, you can issue a threat to that player.

The threat means that if you play a Rob action, you get to randomly steal a card from that player’s stash of earned loot. A Rob action only works against a player that you have threatened, and you can only threaten one player at a time. A player is never required to play a Rob card, meaning that some threats will come up empty. In order to counteract incoming Rob attempts, each player also has a Guard card. A Guarding player will turn the tables on anyone attempting to Rob them, and will be allowed to take a card from the stash of every player who attempted to Rob them that turn. If nobody tried to Rob the player who is Guarding, then that Guard does nothing.

Players will continue splitting loot, playing action cards, negotiating, and switching bosses round after round until the Fuzz shows up. Somewhere near the bottom of the loot pile, the Fuzz card is waiting, and when it comes out the game immediately ends, leaving the critter with the most loot as the winner

Verbal negotiation is encouraged throughout the game, and because players can switch the card they play as a result of incoming threats, bribes, and persuasion from other players, there is a tremendous amount of interaction, bluffing, double bluffing, and tension among all the players on each turn. If you want to play a game that sparks engagement and debate from nearly every player on nearly every turn, GoodCritters fits that bill nicely. For boisterous people who love to jump into a discussion or make moves with an impact on the game, GoodCritters provides many different ways to leverage your position into an even better one. Bribery, making threats, and even just being persuasive at the table can all be viable ways to increase your take every round. Even the most passive and soft spoken players will still be able to interact with the system in a positive way, skimming loot from the top of the stack when convenient, and forming alliances through voting favorably, while avoiding being targeted like some of the louder voices at the table.

On the surface, it is very easy to draw immediate comparisons between GoodCritters and another game of gangster loot splitting, Cash N’ Guns. Thematically, the games couldn’t be much more similar, aside from the fact that GoodCritters has an animalistic twist. Both games see the splitting of jewels, paintings and cash, both games have players using standees of stylized characters while simultaneously playing hidden cards, and both games result in a lot of loud discussion of what just happened and why. Mechanically though, the two games contrast one another quite a bit. While Cash n’ Guns has the absurdity and silliness of the standoff, GoodCritters is much more subtle and more tactical in its approach.

Because of the way Cash n’ Guns encourages players to be over the top, it’s easy to get caught up in the action and throw strategy out of the window for many groups. GoodCritters though, encourages players to be clever. Bribing one player to vote along with you while threatening another to coax them into Guarding so they don’t vote against you. Dividing the loot in such a way that it seems like you’re being benevolent but still coming out on top because of the sneaky Skim action. Shutting down a favorable loot split just so that you can be the new Boss and make an even better split for yourself next round. These are the things that keep the game interesting from start to finish.

There are always many different options available to each player at the table, and the choices do matter. Cash n’ Guns pulls you along, and gives each individual little control over the game state as a whole. With GoodCritters, you have a lot of control over each move you make, and of the way that you present it to the rest of the table. One good turn on your part could add up to a quarter of your total take for the game, but the system is robust enough for a savvy player to nickel and dime their way to the top spot. 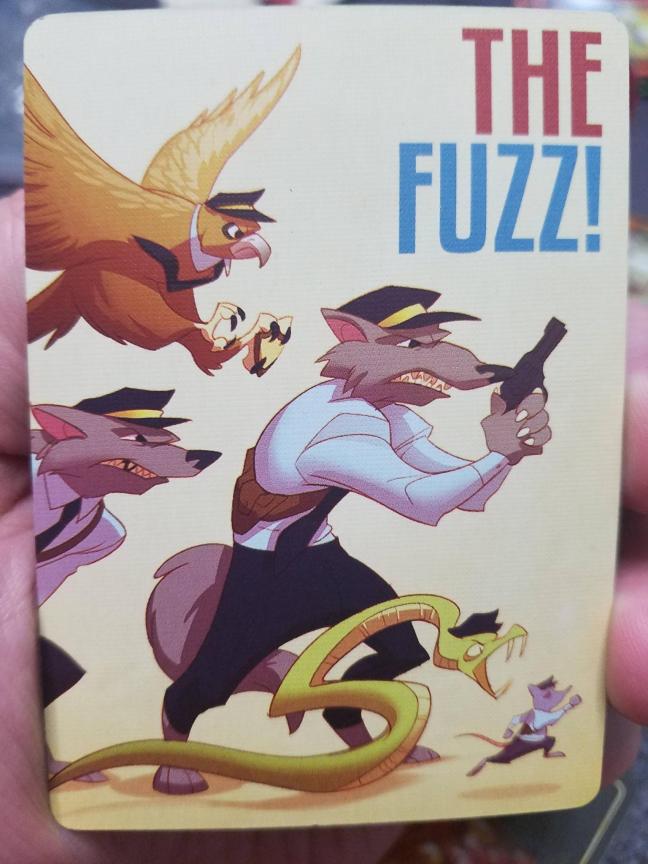 An easy to teach negotiation game with simple systems, yet deep enough to keep players splitting up loot in tons of different ways.

More from the Krewe de Gumbo:

BJ says:  While my two sons love Cash ‘n Guns, I tired of the game quickly. I like a reason to negotiate, bribe, and take out other opponents, and in Cash ‘n Guns, it always seemed like random choices or “kill the leader.”  Enter GoodCritters – where there are so many factors that can influence a player’s decision, and there’s plenty of time to argue about it! The amount of the split, the stack of loot in front of each player, the player turn order, the decision to keep a good or bad Boss, and even who  is next in turn order to be The Boss — all of these add fuel to the discussion. One of the best games of its type, GoodCritters is definitely a keeper in the Gumbo collection.