There’s an angry cloud hovering over The Big Easy this month.  For an entire season, the New Orleans Saints were on a historic line dance to the play-offs, and appeared Super Bowl bound. For some reason only known to the suits in New York, the NFL and its officiating crew snatched the joy of victory right from the closed fists of every Saints fan ready to party down on Magazine Street.

Is there anything out there that could lighten up the Crescent City’s dark visage?

Of course! When people in Louisiana feel melancholy, they turn to the eternal salve to smooth out the bumps and bruises of another abysmal winter. Music is the lifeblood of Louisianians everywhere, from the blues on the delta to the rhythm of the Zydeco dance halls on the prairie, from the Mardi Gras mambos heard all over the Quarter each spring to those fiddle swingin’, accordion squeezing Cajun bands on the edge of the Atchafalaya swamp.

What if someone who appreciates the role of music in the lives of New Orleanians came up with a colorful game all about learning songs, playing to the crowds, energizing the band, and being the best dang busker on Jackson Square?

Tonner mes chiens!! It’s already done and it is out on Kickstarter soon. 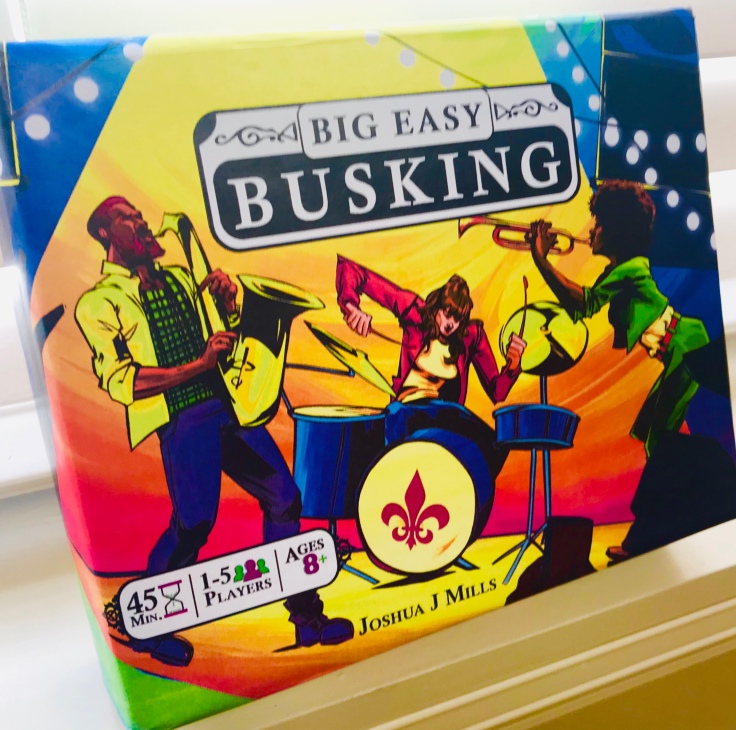 From the design mind of Josh Mills and the wonderfully eclectic tastes of Weird Giraffe Games comes a music inspired game of area control and hand building with a theme we have not seen here south of I-10.  Big Easy Busking is the newest release from Carla & Nick Kopp, and it fits squarely in their line of small box games that pack a big punch.

(Disclaimer: For the purposes of this preview Board Game Gumbo was provided a pre-production copy of the game. Certain components may change from the time of this preview to retail distribution.)

In Big Easy Busking, one to five buskers will compete to learn songs, master the standard songs every busker knows (think well worn songs like Margaritaville, or Mathilda if you are from south Louisiana) and play to the crowds down in the Quarter.

During three rounds, buskers will expend the “energy” from one of their three musicians (sax, trumpet and drums) to play the songs in their hand or the ones they purchase / borrow from the song library to move energy into the crowd.  Once all players have  passed, the energy of each busker at every crowd point gives players a chance to score points.  Control a crowd location and you could garner all two to five points for yourself, but even if you are not the big performer, you can still get some cha-ching in your hat if you played hard enough (expended enough energy in that area).

What seems like a standard area control game has a few twists. First, players start with a lot of energy, but it gets used up quick as currency to learn new songs on the market and play to the crowd. (You can always ‘tip’ your performers to get some energy back). Second, the areas do not have any special powers — but the crowds on them have “moods” and if you match that mood, you can get more money or return some of that energy back to the players on your stage.  Third, there are a few new songs coming out every round with plenty of choices for the mood, but one of those songs is permanent and grants a little bonus power. Finally, not only do the cards change each round, but the designer added the twist of one new location each round with random mood set ups, so building a hand of well rounded songs could set you up for that final round.

The busker with the most money piled into his or her busking hat at the end of the game wins.

The krewe played on a pre-production prototype, so the artwork and production you see in the pictures is not final, so we cannot comment a lot on the production value. But, I will say that we liked what we saw in the prototype box.  The artwork is colorful and the cards are easy to read from anywhere at the table. There is just enough variety in the songs and moods to make it interesting without being too taxing.

I’d like to see a little more variety, but since this is a Kickstarter project and we are seeing just a prototype, I’m sure we will see lots more improvements in the production as the campaign goes on.  We will leave our comments for the production once we see the final product. 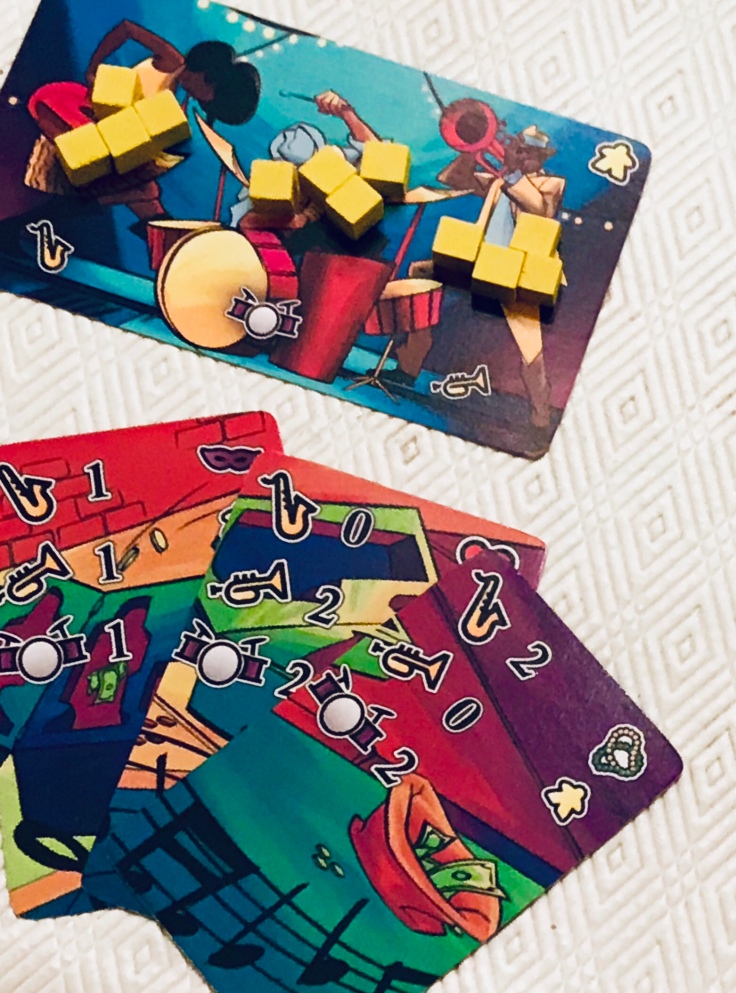 Readers of the Gumbo know that I love small box games that have a kick of cayenne pepper in them, and Big Easy Busking fits that description.  It is small and light and really explores the area control mechanisms but with a few new spices thrown in for good measure. I have noticed in our few plays that players have been a little timid in their bids to put energy on the crowd scenes, but I think it takes that first round for folks to get a handle on the group dynamics are going to be.  Even with such a small box, and with only three rounds, there are a number of questions your group has to answer as the game unfolds.

Will there be a lot of confrontation between those chasing the control of the most rewarding crowd cards?  Or will some players just spread out their energy looking for the guaranteed payouts on every crowd card that happens if they meet the minimum energy level?  Will players jockey to quickly purchase the best song cards to learn, or will one person take advantage of the cheap cards in the standard market to steal a victory?  Once these questions are settled, the second and third rounds in my experience have been a lot more cut throat and interactive. My guess is that the level of player interaction will be scaled to the personalities playing the game. 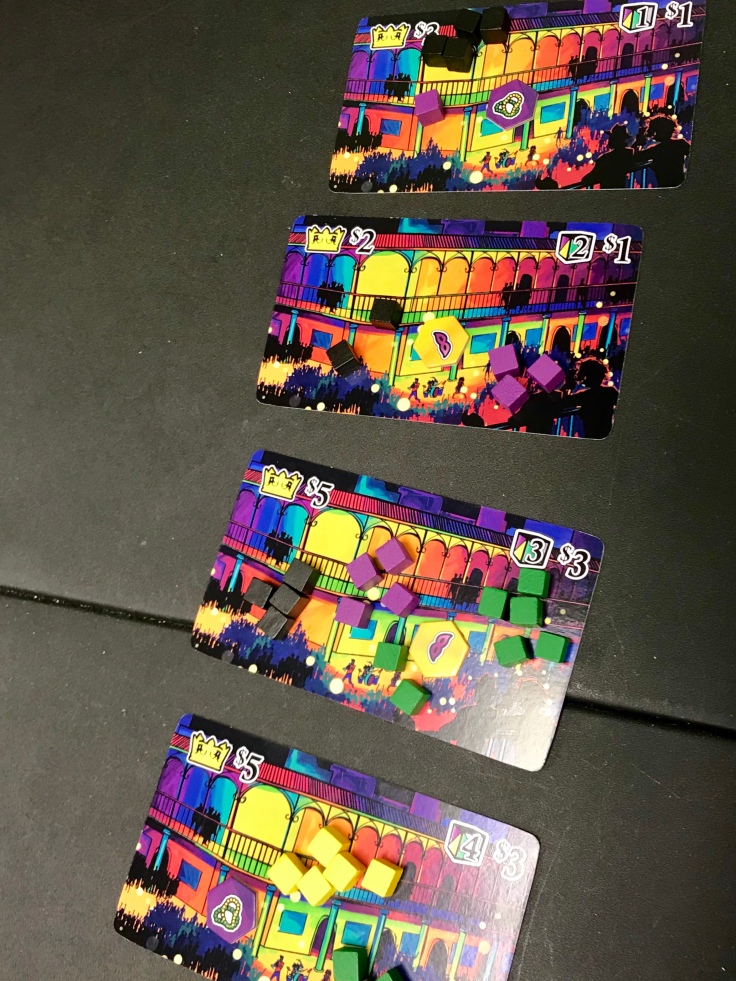 This is not a hearty chicken and sausage gumbo game that you can bring out anytime the weather gets cold and get a full meal with friends, unlike Azul or Reef or Sagrada or Carcassonne or any of those meaty but smaller abstract euros that seem to stay glued to your game night tables each week.   So, if your group is into those type of one hour wonder games that are light to medium weight euros with little player interactivity, then Big Easy Busking frankly might not be for you. This is just not that big of a game experience, and the player interaction from the area control and majority scoring can be downright cutthroat if players are into that sort of thing.  But frankly, I do not think the designer and publisher ever intended Big Easy Busking to be that kind of an abstract euro game to which some groups will gravitate.

Big Easy Busking’s strength is in its smooth design and what it is shooting for as a game experience — it’s colorful,  light and portable, easy to teach, and can easily entertain even the newest gamers in your group. If you are looking for a game that deeply explores a particular mechanic and can still be played in only 30-45 minutes, Big Easy Busking should be right up your alley.

Big Easy Busking reminds me of those memorable nights on Frenchman’s Street listening to funk bands and staying later than you should because the energy of the band and the crowd keeps you going long past your bedtime.  After every game, it would not surprise me that your group will be comparing notes on the strategy they used to build up their hands, and plot out ways to get energy to the highest scoring cards, because there is more than one way to play that beat.

In short, the colorful artwork and the mechanics combine to give Big Easy Busking a thematic edge that a lot of dry area control games do not have, so if that sounds interesting to you, check it out when it hits Kickstarter in the middle of February.