Hey board gamers, BJ from Board Game Gumbo here, back with more Louisiana flavor, this time talking about a game from a designer who is one of the hottest names in hobby board games.

Tussie Mussie is the name of a Victorian era tradition of assigning meanings to the bouquet of flowers one would give to friends and acquaintances. And it’s also the name of new 18 card game coming to Kickstarter soon.

Steve “The Name Father” O’Rourke and I invited Elizabeth Hargrave, the designer of Wingspan, on Gumbo Live! recently, and we got a chance to visit with her about her latest game.

Elizabeth loves unusual themes, and the tradition of giving flowers with meaning is certainly unique in the world of board games. Button Shy Games was kind enough to send us review copies of the game in advance of the upcoming Kickstarter.  Steve and I have been playing the game and sharing our thoughts.

BJ: Steve, you and Jason Dinger have turned me on to the Button Shy Games concept of 18 card small wallet games.  When I heard that Elizabeth Hargrave designed a game and that it is slated for the next Button Shy release, I knew I had to try it.

Initally, I thought to myself that Tussie Mussie was a pretty unusual name for a game, and not something that evoked any kind of reaction. But then, I googled the term and found out that there’s an interesting history there in giving flowers meaning as a part of a Victorian era tradition of gift-giving. What did you hear about the game before you received it, and what attracted you to its design?

STEVE: I discovered the game was coming out as a print-and-play and then later as a full production release through looking for good, small, solo or two-player games. Looking around on BGG (Board Game Geek), I saw that there were a few different contests for designing small 9- and 18-card games. (I got Orchard, a 9-card solitaire game, that way and loved it.) I found that there was a whole culture of creators trying to do good game work in tight design spaces.

When Tussie Mussie was a winner of the Gen Can’t/Button Shy game design contest, I immediately added it to the list of games I was anxious to get. Button Shy’s wallet games – Circle the Wagons, Pentaquark, and especially Sprawloplis – have always impressed me. Add Elizabeth Hargrave design and Beth Sobel art and it was a must get.

BJ: Let’s start with the game play, which is simple. There’s a small deck of 18 cards each with beautiful art depicting a different flower. Each flower has a meaning — and most have special powers on them, either points or actions or both. From two to four players can play, and all you have to do is collect four cards in your tableau and score them. The trick is in how you get the cards.

One of the coolest mechanics in board gaming is the “I split, you choose” mechanic, and in Tussie Mussie, it works to perfection. The active player draws two cards, looks at both, and then hands both of them to the player on the left. The twist? The receiving player can only see one card as one is “received” face up (the bouquet card) and one is “received” face down (the keepsake card). Without knowing what is face down, the receiving player must make tough choices:  Take the card she can see? Or, geaux for the hidden card?

Once chosen, the receiving player puts the card in her tableau and the active player puts the other card in his tableau. Play then continues on to the left until all players have four cards. At that point, separate the bouquet (face up) cards from the keepsake (face down) cards, and reveal all cards. Scoring ensues, and the players play two more rounds. Highest score over three rounds wins!

I’ve played this with a few different groups, at all play counts. I’m really getting into the groove of teaching the game. I start with the history of the tradition, just to keep the theme upfront. Then, I show some cards to visualize the scoring. Lastly, I explain the way the bouquet and keepsake cards get handled at the scoring phase.

The only issues I have had so far in teaching the game are getting players to grok the adjacency rules, to remember the difference between the bouquet and keepsake cards, and a couple of scoring quirks.   How have your game plays been, Steve? 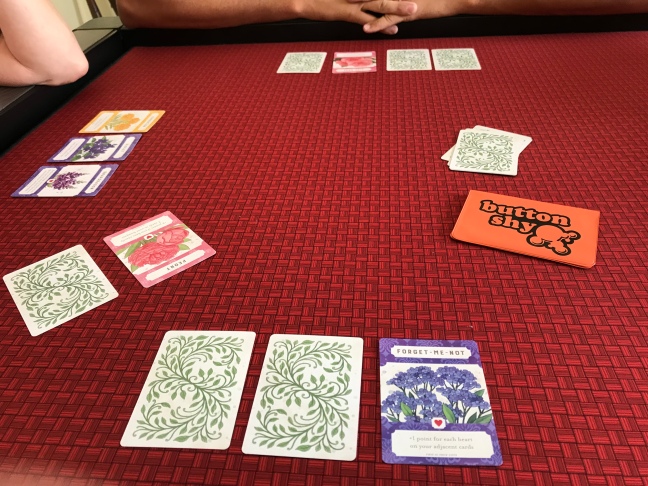 STEVE: As usual for new games in our house, my first games were two-player with my son. And again, as usual, once the game is clear to him I didn’t stand much of a chance.

You’re right about the teach and the rules, BJ. In general, they are fairly straight-forward. On first read, I thought that the adjacency rule was a bit ambiguous. Would any card in the 2nd slot automatically be adjacent to cards 1 and 3, or did they have to be in the same area (keepsake or bouquet) to count as adjacent? I contacted Jason from Button Shy to confirm and he said that adjacency was based on the four slots and area didn’t matter.

BJ: Whoops! That was not clear to me at all in the rules! Gonna have to play Tussie Mussie again, because some of the other cards can really score big points based on where they are in the line up…

STEVE: I think that the rules could be made more clear in the final version by providing a sample four cards at the end of a round and showing how they’d score. (That might not be easy in such a small package, I know.) I like your idea about putting out a sample of four cards during the teach so people can test-drive the scoring.

(Ed note: Steve and I were playing from prototype rules; Jason from Button Shy said updated rules for the Kickstarter are coming).

BJ: One of the key elements in a small card game is the decision making that the design affords. What’d you think, Steve?

STEVE:  In our early games, I didn’t feel as though I had a ton of control over how well I might be doing. I didn’t see how the choices made or bluffs I offered could stack up in good ways for me. I think that the ability to do better in the game comes with more knowledge of all the hearts and effects on the cards. You need to know the deck to be able to play the game well. My son noted that the gameplay will improve once the 18 cards feel like known commodities. However, he also noted that increased plays may lead to the game playing itself out for him.

BJ: Understood. This game requires you to watch what other people have in their bouquet, too, which is a lot to handle on the first play. Did you get a chance to play with more players?

STEVE: I took Tussie Mussie to our game night and we tried it out with four players, too. I felt it played better with more players, but others seemed to think that head-to-head would have been more of an interesting mind-game. The others were impressed by the look of the game, but also felt similarly that the game might not have the long-term variability to remain as a regular in the rotation. It does the job well, but didn’t blow them away.

BJ: I get that. I’ve played at all play counts, and at three and four players, we weren’t playing it as a “meat and potatoes” game. It was passed out in between other longer, meatier games as a way to pass time while waiting for enough people to start the next game. And there was a lot of table talk about the art and theme. 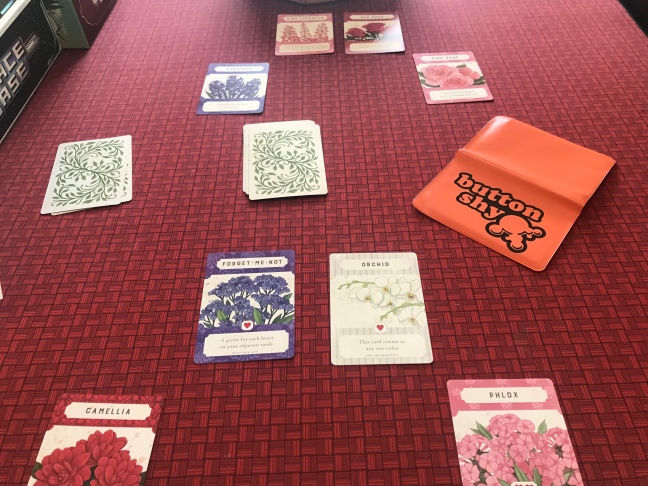 STEVE: The art is lovely, of course, as you’d expect from Beth Sobel. For me, it evokes the pictures of flowers you might see illustrated on old-time seed packets. Vibrant colors. Beautiful lines. And the backdrop on the card edges and backs calls to mind the patterns you’d see in vintage wallpaper patterns. For a small game to have a lush look is impressive. Your reactions to the design and visual appeal, BJ?

BJ: I gotta admit, I really dig the “bluffing, splitting, and choosing” mechanic. It provides surprising depth in a game with only eighteen cards.  I think the art is sparse but solid, and I’m assuming here that this is essentially the art that will be present in the game. Again, it’s not a game I would suggest as the featured game of the night, but it’s perfect for a game while waiting for people to show up or for another game to finish.

STEVE: That’s a good summary about where it might fit in a game night, BJ. It’s a game night appetizer or the sorbet to cleanse the palate between courses of a game night meal.

STEVE:  One last thing to consider is that there is a promised solo mode. As a person who loves the solo puzzle game that can be set up and played quickly (see Sprawlopolis as an example of more Button Shy goodness), I would really like to try Tussie Mussie solitaire. The sole rules were listed as “Coming Soon.” I expect that seeing them will only improve my impressions of the game.

BJ: One last thing from me: we were a little disappointed in the rules that when a player picks a card for the keepsake row, that player can look back at the choice during the rest of the game. I’d love to see how a memory mechanic would change that up, likely significantly in my mind.

Have you played Tussie Mussie, or any of the other games from Button Shy? Let us know in the comments, or on Twitter, or join the Chat Krewe each Tuesday night at 8:30 PM CST at http://www.facebook.com/boardgamegumbo.&nbsp;

(This week is a special episode on Thursday night with Mandi Hutchinson of the Dice Tower.)

One thought on “Beignets & Board Games: Tussie Mussie Discussion”