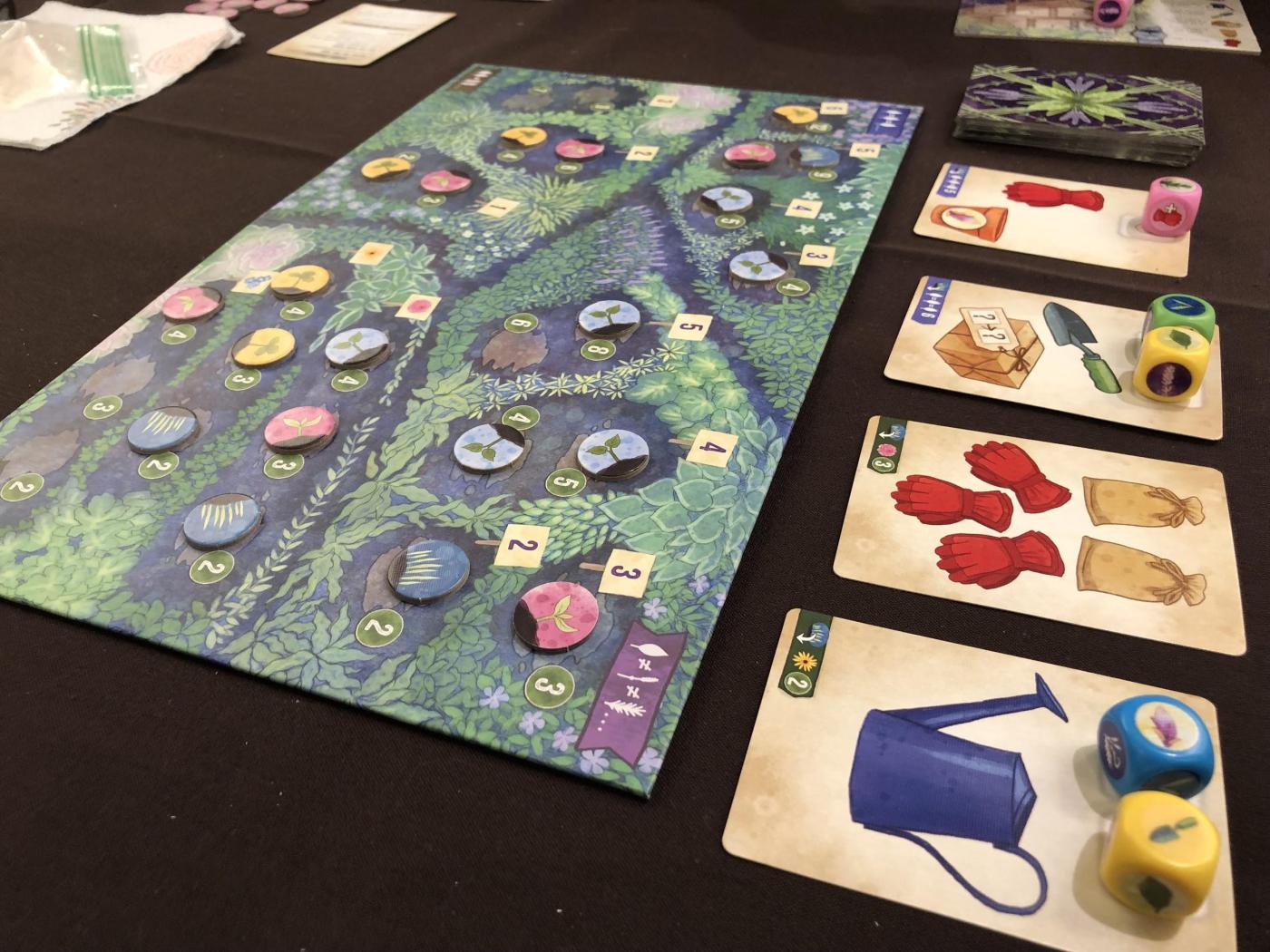 Board Game Gumbo is pleased to welcome a new voice to the blog. Verla LeBaron, who you may recognize from the Chat Krewe on Gumbo Live! and a frequent poster on the Gateway & Filler Games Group on Facebook, is back from her first trip to BGG.Con Spring and her first contribution to the Gumbo! You can reach her at her Instagram account: @the_board_game_ambassador or BGG at Board Game Ambassador or on Facebook . Be on the lookout for her post Essen wrap up this fall!

It’s summertime, and as I’ve gotten deeper into the board gaming hobby in just two short years, I’m finding out that summertime means con season! I spent Memorial Day weekend kicking off my summer at BGG Spring in Dallas in the middle of a two week trip visiting best friends I hadn’t seen in five years. Every day of BGG Spring, I kept wishing I’d known about the vast board game universe when I lived in Dallas many years ago for college and grad school. Now that I know about BGG Spring, I suspect it won’t be another five years until I see my BFFs again, and next time, I’m rounding them up to go with me!

Originally, I expected to attend by myself, but at the last minute, my brother (who is in the Air Force reserves and was stationed in Oklahoma for several weeks) found out he had the holiday weekend off and drove down to join me. We stayed off-site at an AirBnB, and rolled into the convention about a half hour after registration check-in had started. The line was still considerable when we got there, but moved rather quickly. Before we knew it, we were collecting swag bags and choosing games to bring home, along with Camp Bee Gee Gee beer glasses. I was concerned about fitting things into my luggage, so I opted for two smaller games, Diamonds and Memoarrr!, while my brother chose First Martians and Voodoo. (Saint Malo would have been an option I’d likely have chosen if we’d gotten there earlier before they ran out of that one.) 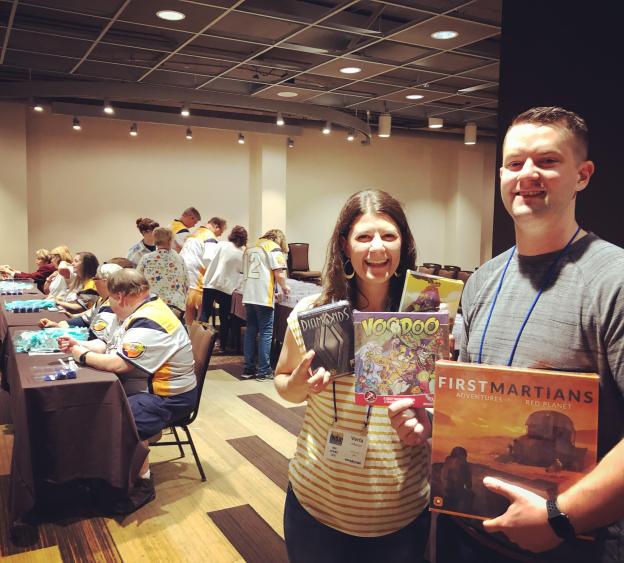 After unloading our swag at the car, we came back to check out the massive BGG game library. It included a wall of the newest, hottest games, walls of older games, both well known and obscure, and a dedicated section of tables in the middle of the room holding previous Spiel des Jahres winners. I counted 46 huge shelves in total, all loaded with games, and decided that this magical room was a little piece of heaven.

My brother very much enjoys board games, but hasn’t quite yet become the obsessed fanatic game connoisseur that I’ve been turning into, so his initial reaction to the library was: “You pick out some games. I have no idea what to choose.” I quickly spotted games I already knew I wanted to try and thought both of us might enjoy.

First up was the two-player Naga Raja, from Bruno Cathala and Théo Rivière. Each player is exploring a temple, looking to uncover ancient relics, both sacred and cursed, along the outer edges of their temple. 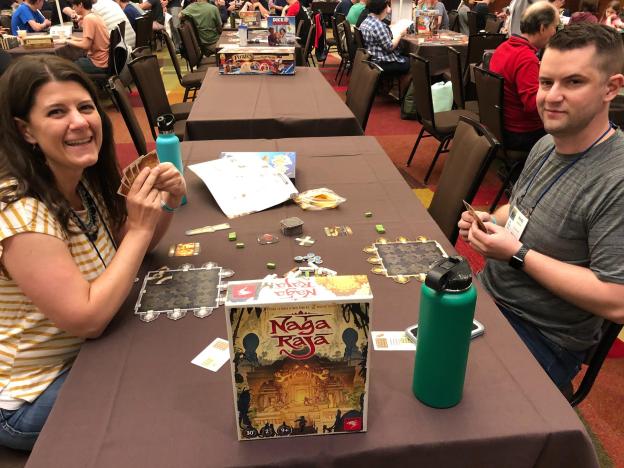 You move around by adding room tiles to the temple, with pathways that hopefully lead to the relics, but in some cases, you might get blocked, depending on the tile. Each round, you use various cards to determine which fate sticks you get to roll to determine who wins the room tile to place in the temple to create pathways to the relics. The first explorer to get 25 points wins, unless an explorer uncovers all three cursed relics and immediately loses the game. Naga Raja plays quickly and was very enjoyable, so we ended up playing it four times before returning it to the library. 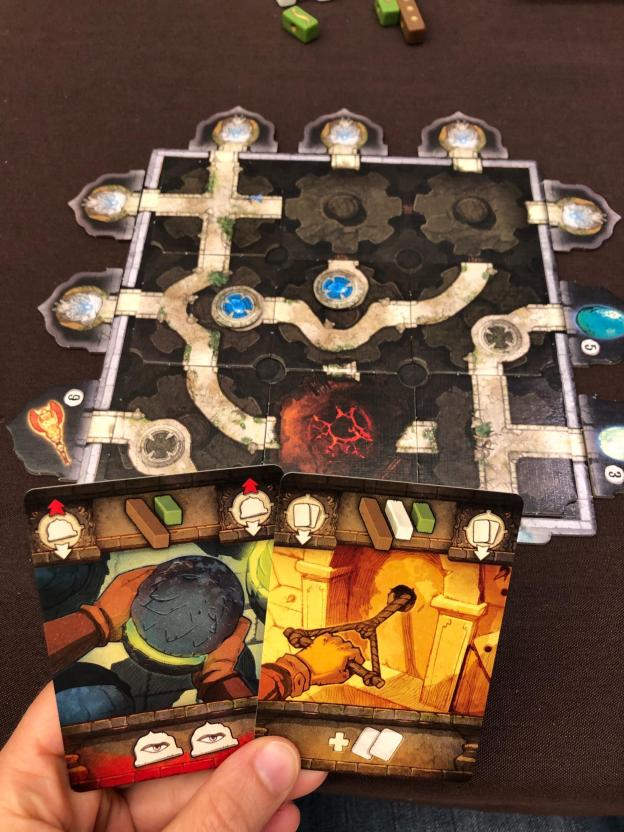 I stayed in the library for an hour-long volunteer shift that flew by all too quickly. I was checking games back in for attendees and getting ideas of what else I might want to play over the weekend, when Rahdo walked up to turn a game back in. We chatted about the game he handed me, and I did my best not to look like a crazy fangirl.

After my library shift, I met back up with my brother, who had been reading through the rulebook for Asking for Trobils and recruiting a few more players before I returned. This was a game that was high on my list to try, as it had been recommended to me over and over again in my favorite game group, the Gateway and Filler Games Group. (Side note: check them out on FB! Friendliest game group around!) No one in my gaming circle at home had this one, so I was eager to snatch it off the BGG library shelf and get it to the table. 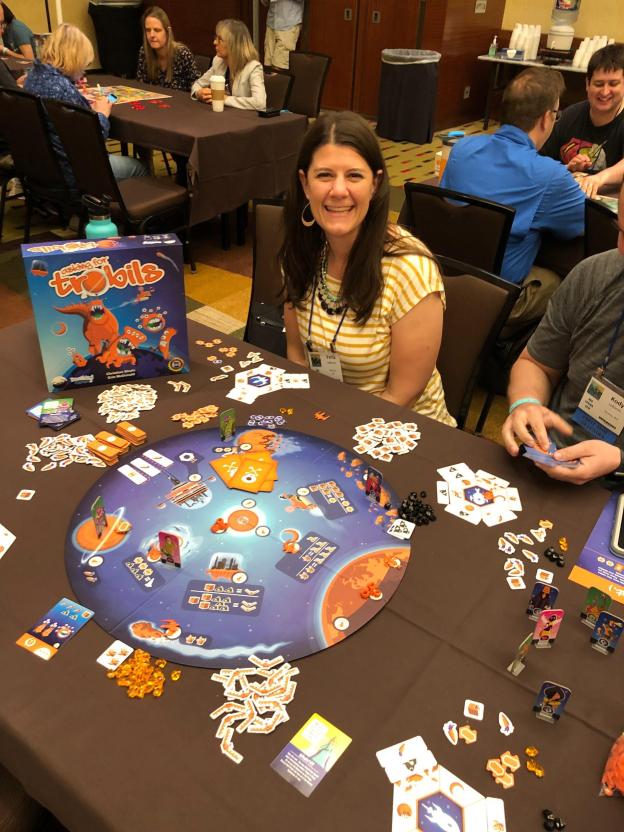 It did not disappoint! This 2015 gem by Christian Strain and Erin McDonald is a great family level worker placement game that still has plenty of meat on the bones for more experienced players. We liked it so much that we played it again twice on the last day of the convention. I appreciated how it scaled down really well to two players and worked just as well as it had at four. It has the option of up to seven players, which is really handy sometimes when looking for a game for a larger group that’s not a party game.

The theme was a lot of fun. You are trying to rid the galaxy of space vermin called trobils by placing your ships at various locations to gain the resources needed to build traps for trobils, and eventually flinging them into a star to gain more credit resources used for more traps. At one location, you can draw Riffraff cards to obtain bounty hunters, pirates, smugglers, racers, sheriffs, and more, all with special powers or actions that help you in your quest to trap as many trobils as possible for victory points. This was a game that needed to be added to my collection ASAP. 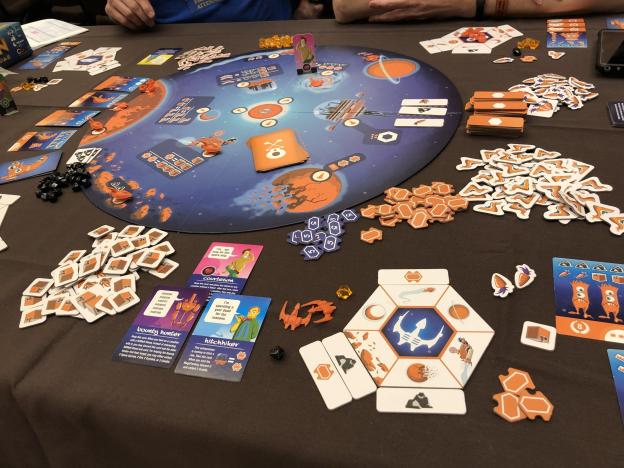 We ended our day early due to dinner plans with local friends. On the way out, we scoped out some of the dexterity games set up for open play in one of the main lobby areas, and stopped to play WeyKick on Ice. In this game, you move hockey players by magnets underneath the rink, trying to score goals. If you move too fast, your player might get disconnected from the magnet and go flying off to the side. (Or if you’re too enthusiastic, you might smash your fingers a little on the bar under the rink that keeps each person on their own side!) This was a great game to end the day on, and brought a lot of laughs. 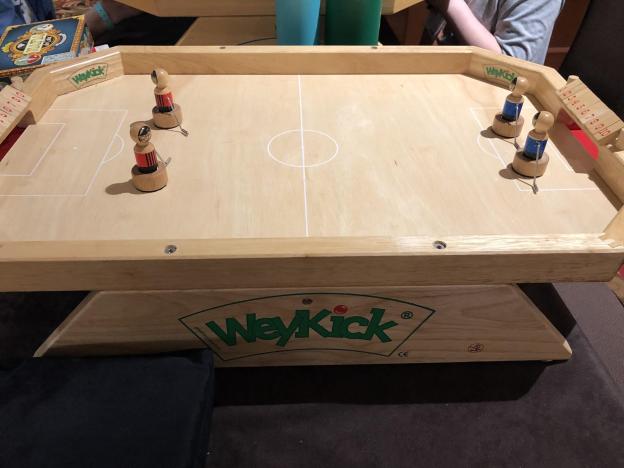 For Day 2, I was flying solo while my brother had the opportunity to attend a PGA tournament in Fort Worth. I made a beeline for the library and snagged a copy of Copenhagen, then grabbed a “players wanted” flag and headed for a table. I had three more players before everything was out of the box, and we all learned it together. This is a new polyomino game from Queen Games that I’d seen on Kickstarter just a couple of months ago. Despite my love of these Tetris-y type of games, the videos I’d seen for Cophenhagen didn’t really leave me feeling overly impressed with the theme or artwork, but since there was a copy here, I figured I’d give it a try. 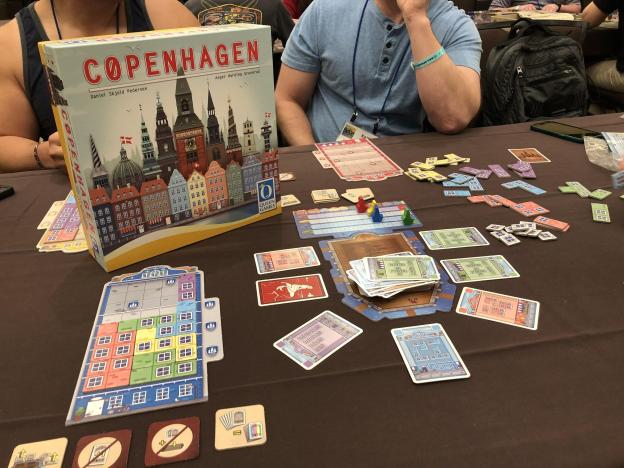 It turned out that I enjoyed building facades for houses along the harbor in Copenhagen a lot more than I had anticipated. (So much so that this game went straight to my wishlist!)

You build by collecting sets of same colored cards (much like Ticket to Ride), then turn them in for tiles to add to the facade of your building. Each time a row or column is completed, you score points. If you cover a coat of arms or finish a row with a coat of arms, you can collect a special ability tile, take a special one window tile and place it immediately, or else activate all previously used special ability tiles by flipping them back over. You win by being the first player to 12 points or else have the highest number of points when the end of game card is revealed. 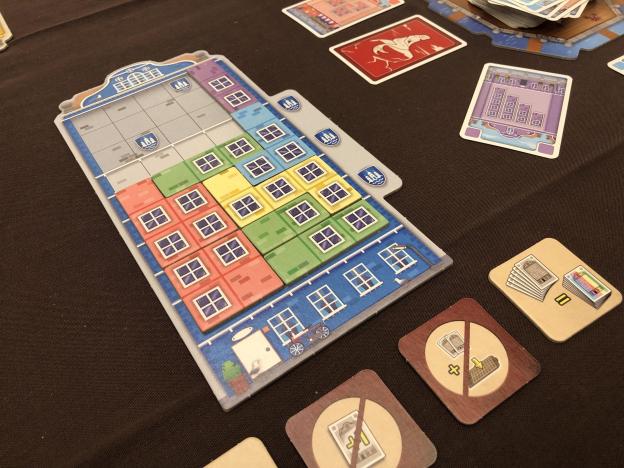 After that, I traded in Copenhagen for Herbaceous Sprouts, a dice version of the ever-so-lovely card game, Herbaceous, illustrated by Beth Sobel and designed by Eduardo Baraf and Steve Finn. 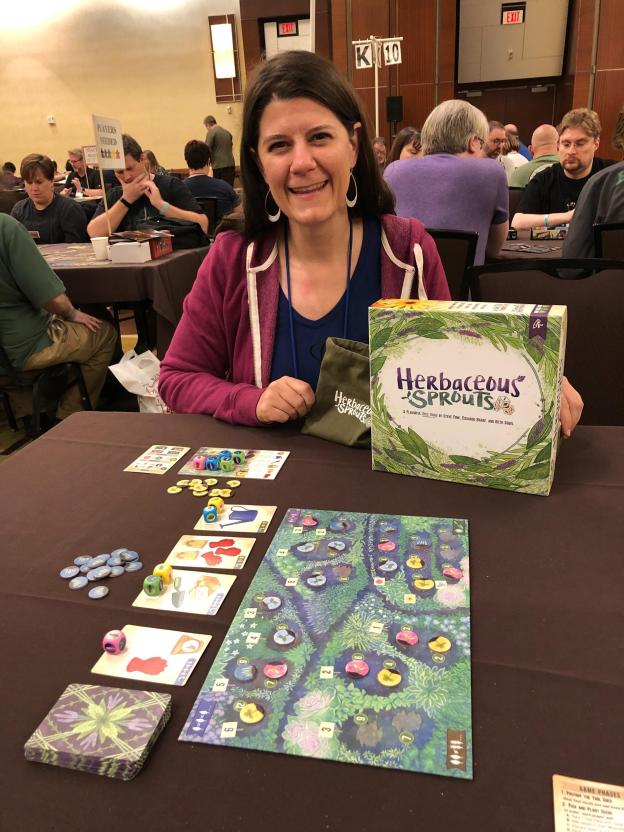 In this version, you are trying to become the Head Gardener by collecting herb and flower seeds (on dice) to plant in the community garden, using the tools on cards. There’s a push-your-luck element by trying to save seeds in your wheelbarrow to plant in a better spot at a later time in the game. 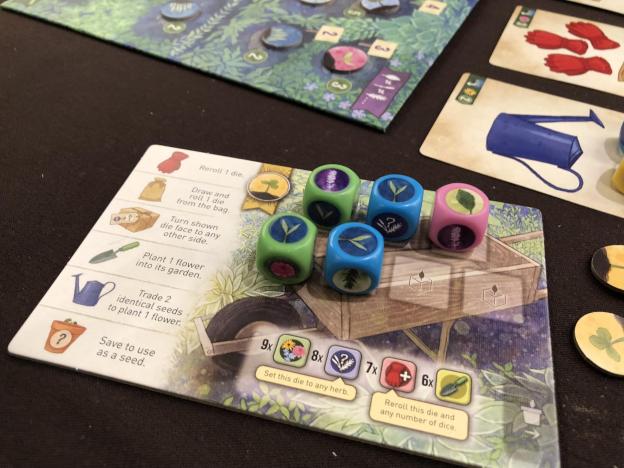 I really enjoyed this dice rolling version, which is every bit as gorgeous as the original card game. It was easy to learn and takes about 30 minutes to play. This was another game added to my wishlist. 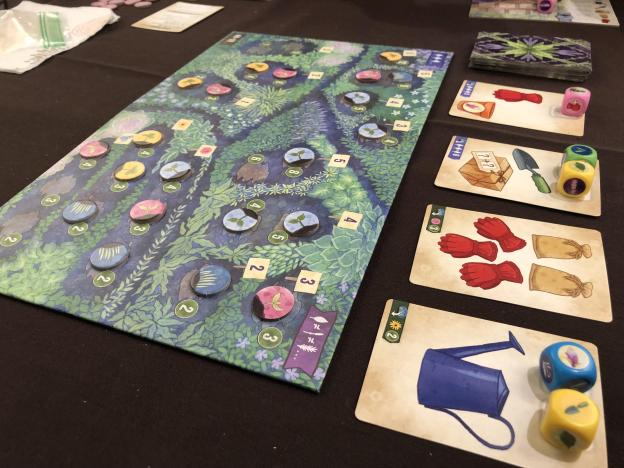 After building a beautiful community garden, I joined a father and his young son looking for players for a game of Barenpark, which was my first introduction to polyomino games nearly two years ago. It was nice to take a break from learning new games with a familiar favorite, and also got me itching for the upcoming expansion. 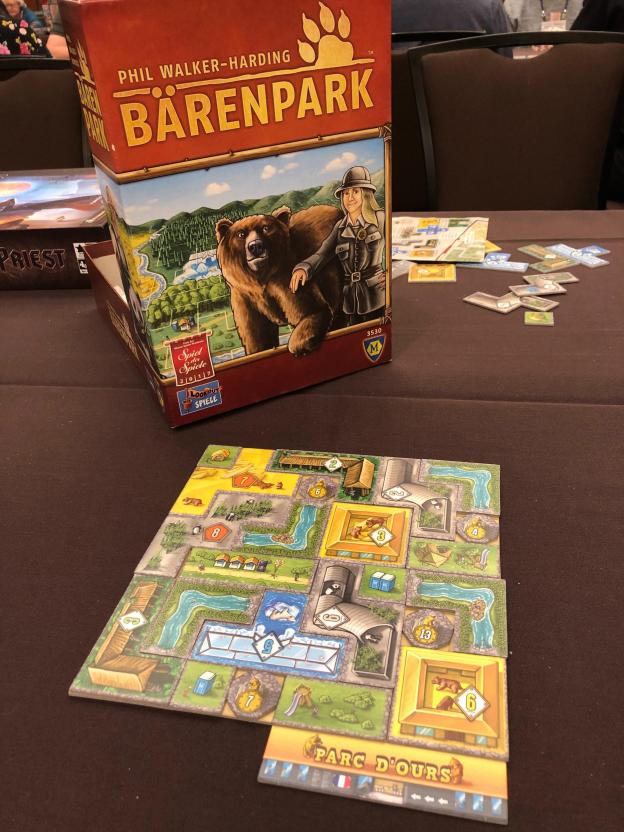 I decided to take a break to check out the BGG Storage Sale for Charity, and quickly realized that I should have gotten in line long before the doors to that room opened at 1:00pm, instead of getting in line around 1:15pm. Curiosity about what treasures might be found kept me from leaving, despite how far back I was. By the time I made it into the sale room, it seemed that anything familiar had likely been scooped up by the early birds to the line, but once I was in, there was no turning back. All games were $10 cash only on Saturday (remainders went down to $5 on Sunday), and the sale benefited a wonderful organization in Dallas called Cafe Momentum, which provides paid, year-long culinary internships to at-risk youth coming out of juvenile facilities, teaching job and life skills, and providing mentorship and support. The restaurant is ranked in the top 50 in Dallas, a huge accomplishment in a city with thousands of restaurants. It was exciting to hear the final sales total on Sunday evening: $15,000 went to Cafe Momentum thanks to sales of used games from the BGG library!

I ended up buying two games from the sale, and was really excited to find that when I opened each of them to check and make sure all components were there, both games appeared to be in brand-new, unplayed condition. SCORE! I’d heard of Slide Blast (thanks again to the Gateway and Filler Games Group) … 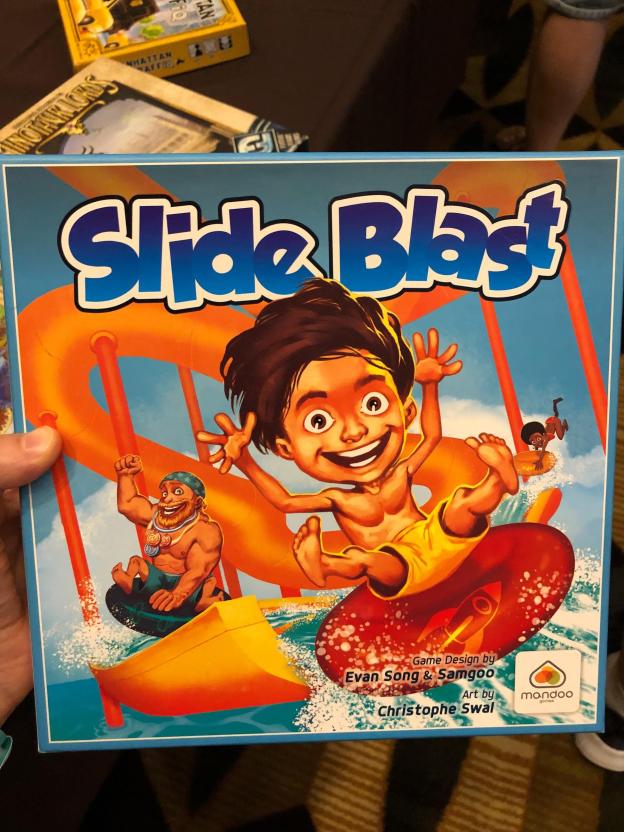 …. but Barnyard Roundup was unfamiliar. However, the card art was adorable, and I had a feeling I couldn’t go wrong with a James Hudson game from Druid City Games. I’m looking forward to when my toddler nephew is old enough to play both of these. 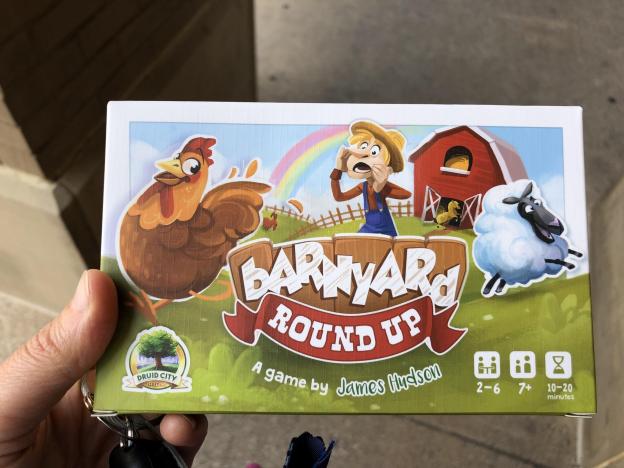 One thought on “BGG.Spring Recap by Verla, your Board Game Ambassador, Part One”