If you are one of the 14 people who regularly watch Gumbo Live! each Tuesday night (insert sound effect for crass commercial here), you know that one of the games over the last four years of reviewing games I truly did not enjoy was Machi Koro.

I’m not going to spend the next 250 words comparing Space Base to Machi Koro, and wax poetically about why John D. Clair shot a United Earth Services missile at Machi Koro and blew it into smithereens. Not because it wouldn’t be fun, or easy to write — Lord knows, that would be an easy blog post to write and I’m freakin’ busy trying to get ready for a trip to Dice Tower Con — but because it has been done a million times before.

In a second, I’ll get to reasons number 3, 4, 5 or 6 (depending on how long it takes you to play through it) that Space Base’s new expansion makes Machi Koro’s expansions seem like UES cannon fodder.

But first, I have a few questions that are important to this review:

Did you like the original Space Base? Then don’t even read this review, just go ahead and spice up your Space Base game with expansion number one, The Emergence of Shy Pluto. I’ll catch you in the next blog post. Thanks!

BUT, if you are one of the two people from North Dakota who have not played Space Base, then let’s check a few things. Do you like to roll dem bones and hear them clickety-clack on your game table? Do you like engine builders? Does your heart pump oxygen-rich blood through your arteries to your tissues and organs?

Well, then, fan of the Western Meadowlark, spice up your game nights with Space Base: The Emergence of Shy Pluto!

Shy Pluto is a 2019 expansion to the wildly popular game published by Alderac Entertainment Group (AEG) that is designed by John D. Clair. The game plays two to five people equally well in about an hour and ten minutes, with art from Chris Walton, the original artist for Space Base. It is the first of thousands of planned expansions (I’m starting that rumor right now, right here) for the original base game. I would tell you if it is entirely compatible and modular with the game, but of course, I won’t because…well..spoilers.

Throughout this review, and not necessarily excluding the preceding paragraph, there may accidentally be spoilers. This all assumes that the editors are still sleepy after a late game night playing Memoir ‘44 and Quacks of Quedlinburg and are too tired to catch and repair any such spoilers, if any actually exist. You have been warned.

By the way, Board Game Gumbo was provided a courtesy copy of Shy Pluto from AEG for the purposes of this review.

Shy Pluto comes in a nice hand sized box that contains the same beautiful art work and graphic design as its predecessor. The box is sturdy, the artwork colorful, and all of the included <redacted by sleepy editor> in the game are cool to look at. With just a few notable exceptions, I liked the graphic layout of the original Space Base cards, and if there are any additional cards — and I’m not saying there are — but if they are, I’m sure that I think they are just as easy to read and well laid out as the originals. <hmmm, I’ll let this one slide.> Overall, another great production from AEG, that also includes <redacted, of course.>.

This one’s easy. As one of up to five UES bureaucrats, it is your job to score as many victory points as possible by upgrading your base using the results from <redacted> die rolls. The twist in this game is that you benefit from the ships assigned to die rolls on your base, two through twelve, but you also benefit from the ships you’ve launched above those numbers two through twelve when other players are taking their turns.

And, best of all, you can stack the cards you purchase onto each number as much as you want for some absolutely delicious fun, and then laugh heartily at the other players when they roll your thrice upgraded seven base four times in a row!! In your face, space punk!

It is a race to be the first to score 40 points <or is it??> first, which triggers the end of the game. Towards that goal, players can earn space bucks or space credits (or is it spaced themed gold coins?) on their player board to spend for the cards available in the market that can generate victory points. That market consists of <redacted, obviously> levels of <redacted, come on man!> that you can purchase.

But remember, in another diabolical twist, each purchase you make drops your entire space bank account to space zero. To combat this, the designer included one more track that you can upgrade, besides space coins and space VPs, namely the Space Backstop (the floor to which you reset your space money level after each purchase). Increasing the Space Backstop helps you build an engine that can reach the cost of the highest rocket cards, which include some that only give you victory points and nothing else. 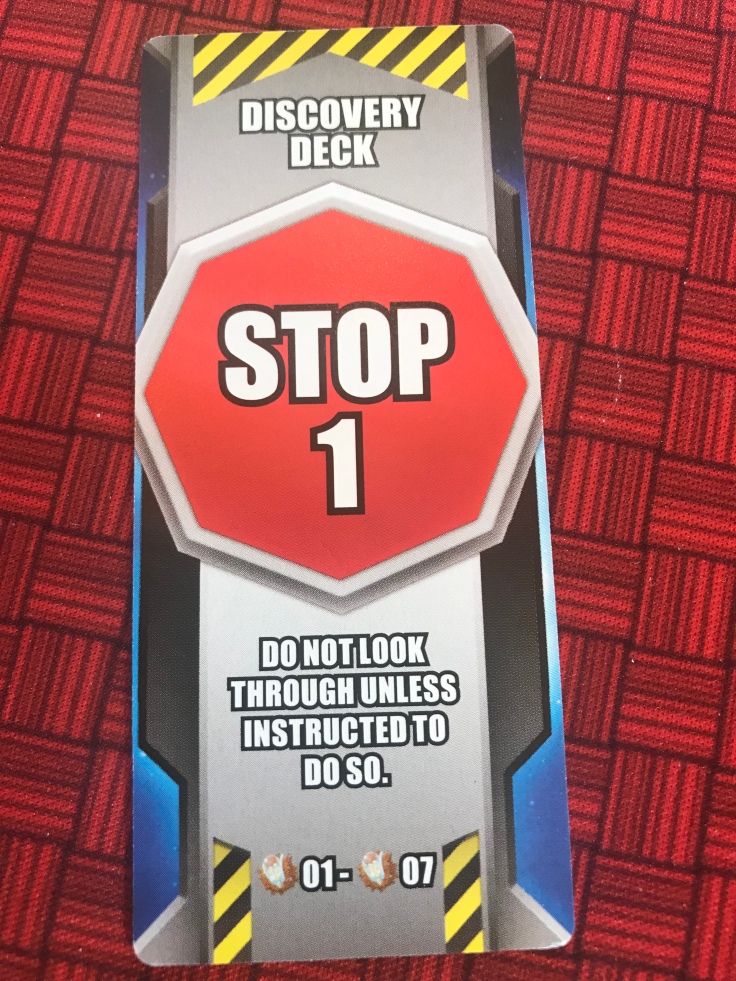 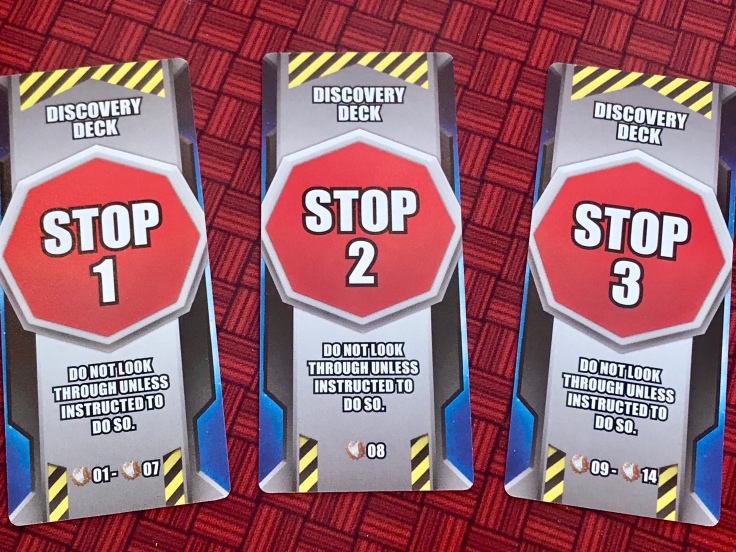 Without giving anything away, let’s just say that it will take you considerably less time to complete Expansion number one than it will to complete any of the Pandemic Legacy campaigns or to never play SeaFall.

I have a well-deserved reputation for liking a lot of games. I easily cop to it, by the way. I’d much rather play a good game than clean the gutters. Let’s get that out of the way — you already know I like Space Base, so the parking meter was already paid with a quarter or two before I parked in this spot.

But being predisposed to liking the experience and having a designer deliver on that promise are two different things. So let me tell you what I like about the expansion that I think might help you decide if it will catch your eye.

First, a disclaimer — I’ve never completed a legacy or campaign game before embarking on Shy Pluto. My sons and I got about 80% of the way through each of the D&D games we’ve played. I convinced Phil to buy SeaFall many years ago at Gen 2016, and then we never played it. (But we have used the coins in many plays of Elysium, so….win?) My family and I started Pandemic Legacy Season 1, got to May, and then my wife said, “I love Pandemic, but I’m not playing it twelve times in a row. Enough!”

So, my track record on legacy or campaign games is pretty poor. The first thing I liked about Shy Pluto is that it was completable! There’s no reason that you can’t complete all of the missions from start to finish in six or fewer games. That’s a win / win in this busy landscape of thousands of games coming out each year. Hey, John D. Clair and AEG, give yourself a big pat on the back for making a digestible campaign game.

The second thing I liked about Shy Pluto is that it added certain things to the game, that unfortunately I cannot talk about, that enhances the experience of the base game. After the campaign was finished, my son Matt and I looked at each other for a second and agreed that we need to leave in the <redacted, for the love of former/current planet(oid) Pluto, you cannot talk about that!>, because the integration was pretty seamless. One of our buddies at Gumbo Game Night loves Space Base, and I’ve talked him into playing the game without the campaign, just throwing everything in there. I’ve got a feeling that it will play just fine. We’ll see if my hunch is correct. 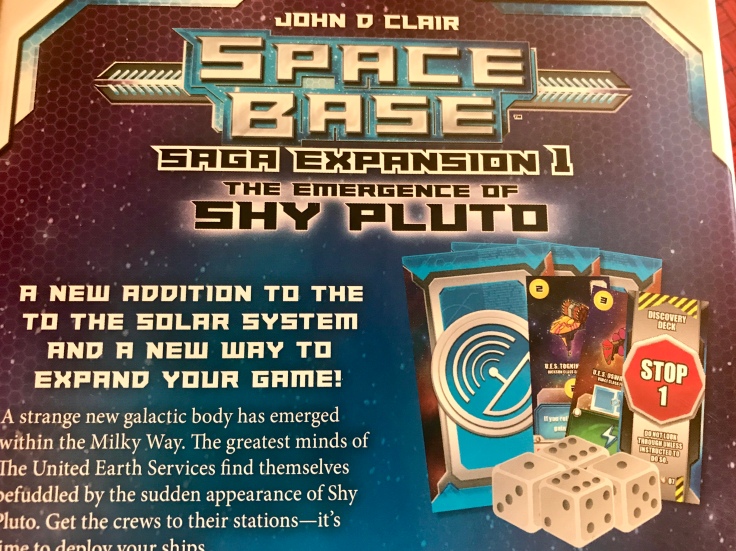 It is hard in a review of this nature to talk cons specifically, without going into the spoilers. I’ll just briefly and carefully state that if you are expecting a giant sized thematic experience as part of the selling point of a “legacy” or “campaign” game, well, I would temper that enthusiasm a bit. It’s a nice story and all, but frankly, it kind of seemed like a bit of an overlay over the mechanics. The story was interesting, I guess, but ultimately was not that big of a pay off. Your mileage may vary, but I the best I can give the designer and publisher is an E for effort.

Also, the downside to a bite sized campaign is that there aren’t a billion surprises in the box. But, be serious for a second. If you buy Shy Pluto and are staring at a hand sized box, how many “surprises” can you really expect? I’ll just tell you that there are a Goldilocks amount of surprises in the package for the price you will probably pay.

I do not consider many expansions to be must-have. The recent Coimbra mini-expansion felt like sucker branches that had been pruned from my satsuma tree, but repackaged in a beautiful little box. Contrast Coimbra’s Royal Favors expansion with Stockpile’s expansions from Nauvoo Games. They all added just a teensy bit of complexity but a lot more gameplay, so I’d consider them to be necessary.

For me, Shy Pluto fall just short of Stockpile’s “necessary” category, but I’ve already boxed everything in the main box and I plan to keep it that way. . Anything else I say will just be redacted, anyway.

If you like Space Base, you’ll want to (a) get Shy Pluto, (b) play through the campaign, and (c) add whatever it is that I cannot talk about into your base game of Space Base, if anything actually comes in the Shy Pluto box that hypothetically adds to the game, of course.