BJ from Board Game Gumbo here, with the final installment of our tour of Dice Tower Con 2019.

After a late night of podcasting with Alex Goldsmith of the Dukes of Dice, there was no rest for the weary. The games await! We got up early to head to the hot games room to meet up with Alex and Mr. Sean. As usual, there were plenty of empty tables before 7:45 am. 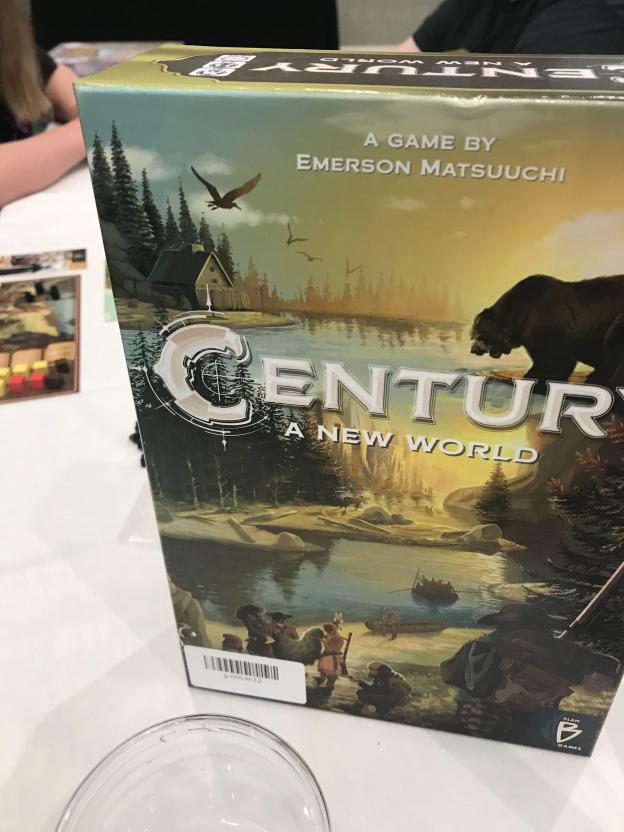 First up, while Mr. Sean was completing his daily Champions of Midriff workout, Alex taught me and another listener (Jason?) and his daughter the new Emerson Matsuuichi game, Century: A New World.

The third in the Century trilogy put out by Plan B Games finds players exploring the coast line and hinterland of a new world, trading with the indigenous people for goods. 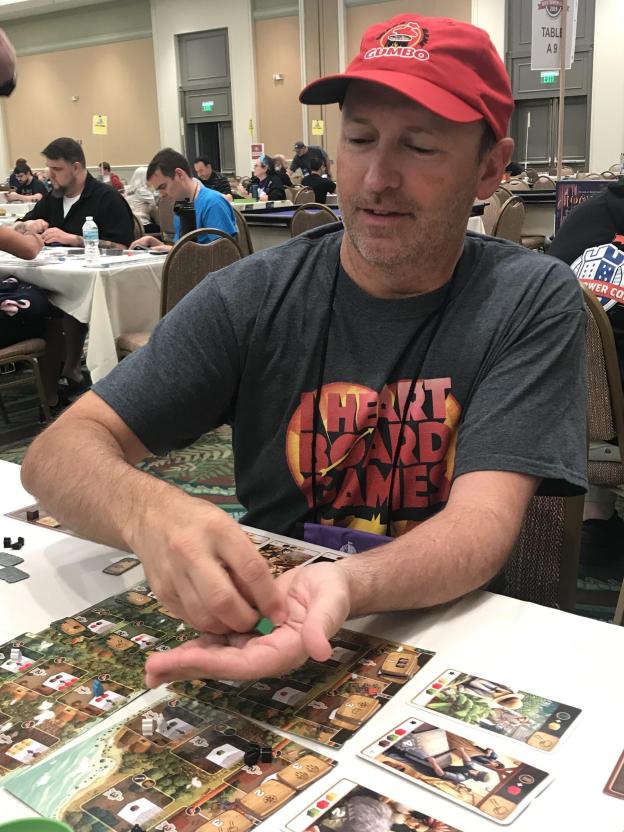 If you have played any of the games in the series, you will likely recognize the art, as well as the familiar four colors of the goods. The trading mechanism should also be very familiar, but what is different here is an exploring mechanic that keeps certain areas of the board off limits until players reach certain levels. It is a twist on the familiar Splendor touches of the game that I found not only refreshing but engaging. 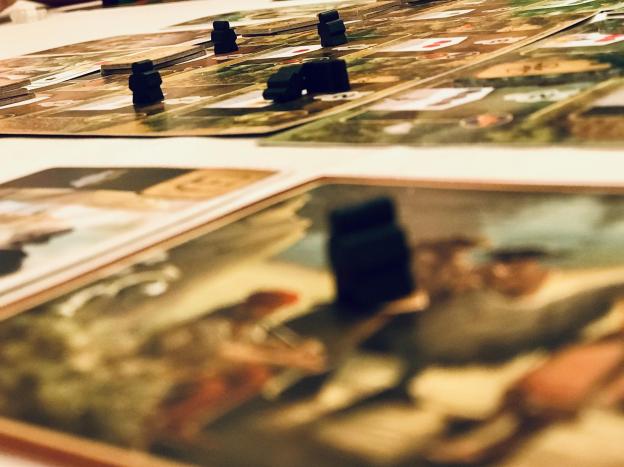 There is a lot more to like about A New World: upgrading your explorers with tiles, the teeny tiny size of your explorer meeples, and the race aspect of the bonus tiles. This is just based on one play, but my initial reaction is that the newest entry is the best in the series.

Next up, Mr. Sean finally joined us after his work out. He was in luck! I finally got to present him a free brand new copy of Tiny Towns donated by AEG and the designer, Peter McPherson. Mr. Sean was the winner of the Gumbo Live! “Name That Tiny Town” contest back during Peter’s appearance on the show.

We did not have time for a full game, so Mr. Sean and I grabbed the open copy of Ticket To Ride: London and played a quick three player game. I had been underwhelmed with my plays of its predecessor, TTR: New York, as I found it to be a bland stripped down version of TTR. The addition in London is a scoring mechanic where players try to connect whole “districts” across London. I thought this one small tweak added one more level to the routes and destination tickets point strategies and was a welcome addition. 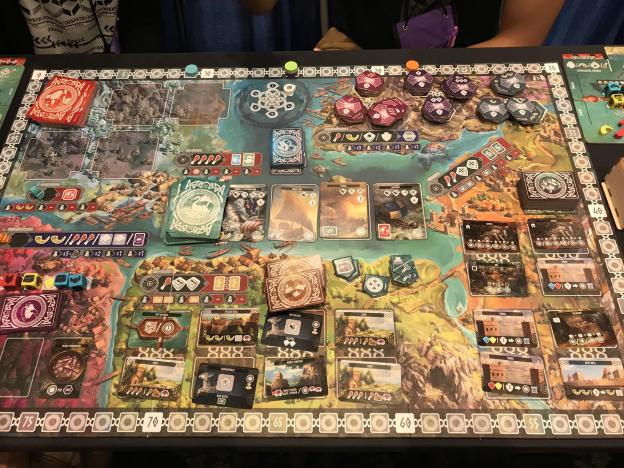 After the game, I headed back to the Grey Fox Games booth for more demos of Bushido and Reavers of Midgard. 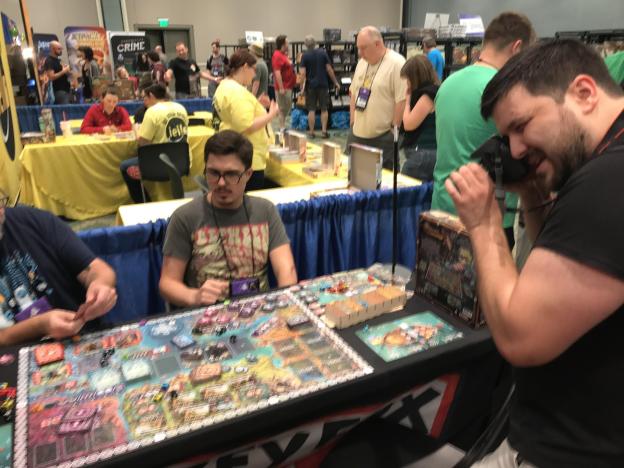 It was fun taking pictures of the colorful boards and pieces, and I even caught a snapshot of the gang from Never Bored Gaming grabbing pics.

After the exhibit hall closed, Alex and I met up with some of his friends from Orlando and we ran through a bunch of good games in quick succession.

First, we all learned Bosk together. Bosk is an area control game designed by Daryl Andrews and Erica Bouyouris with a very friendly theme: we are cultivating the wooded areas of a beautiful national park, spreading our trees’ leaves throughout the board (to score points of course.)

I totally misunderstood how the wind was going to work at first, and did not catch on until the last half of the game. Notwithstanding my error, I still placed first place just edging out the others in a very close game!

We moved to the back of the hall and Alex taught us Fantasy Realms, a game by Bruce Glassco published by Z-Man Games last year. Imagine if every drafting card game you ever played had the craziest, most over powered and broken combos ever made. That’s Fantasy Realms, the game that celebrates being OP. The art was disappointing — just some stock fantasy pieces without much in the way of life or originality. The game itself was fun, and while it is not a keeper for me, ironically, I think the Gumbo Krewe would like it. I could see Rosemary or Kent purchasing this game easily, and although not my favorite of the con, I would play it again. 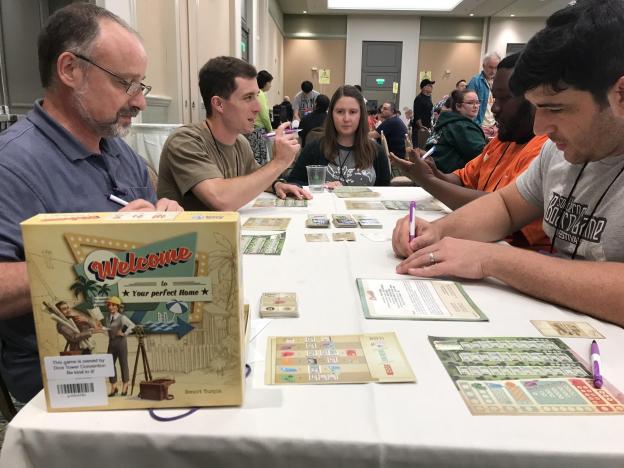 Alex and his Orlando friends left in search of food, so I passed by the gang from Southern Board Game Fest about to start a game of Welcome To… from Deep Water Games. I really enjoyed this one back at BGG Con, so was happy to join in. Unfortunately, I missed most of the rules teach and was really rusty on how the different cards worked. I opted just going for the safest choices while learning the game on the fly. Yes, that was not my best strategy ever, as I finished pretty far out of the lead. But, good randowrites still engage me, and this is one I could see purchasing for my wife and me to play at home. I did not log a score, but I think Sagan and Emily and John were in the middle of the pack ahead of me.

It was getting late in the evening, and late in the con, and I still had not yet played New Bedford, a worker placement game about whaling and town building in early Connecticut, even though I had been carrying it around for four days.

John and Emily from SoBo helped me rectify that dilemma! This was their first game, so I took time setting up some fun combo tiles involving lots of production and whaling encouragement. They took the bait (ahem!) and we were off. 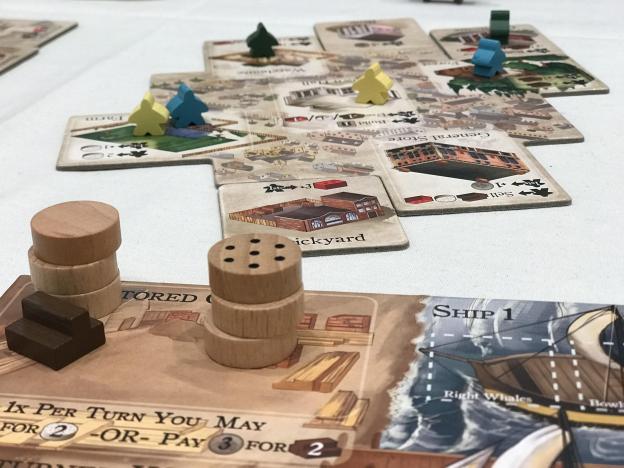 The production value from Dice Hate Me Games is outstanding, and designer Nat Levan seamlessly integrated two different mechanics (boat sailing and town building). All of us were building good building tiles, and we were also scrapping for the best whales. The bag was very friendly to John, especially when Emily kept taking out the empty seas for points. We bought all of the victory point buildings, except for the poor little Shanty, which never seems to get built. In the end, John’s bagging of a big whale got him over the top and he won pretty handily.

The last day would be short for Jack and me. We had a twelve hour drive home, so my booth shift was only fori the first few hours. I did manage to finally find a free table of Hadara (it had been busy all week and every morning) in the hot games area, so Sagan taught Emily and me how to play. Wow, this rocketed up to one of my top two or three games of the con!

Yes, it has a 7 Wonders feel to it, but there is no drafting. Instead, it uses a mechanic I call “delayed drafting.” Players follow this cool little wheel in the middle of the board which tells them where they draw cards. Those cards are either paid for and put in the player’s tableau, or discarded for more cash, or put into a pile that is used to seed the second round drafting. So, if you really want a card, but can’t pay for it yet, you can throw it back into the mix hoping that you will have the cash then. I was following my military strategy pretty closely but always coming up one or two levels short to get the early buys. I did maximize my gold and silver medals, so had a good score, but it was not enough to beat Sagan.

The last game of the con was Gem Hens, which I demoed three or four times before leaving. I even got in some full plays with some very nice families, one of which went crazy with the “chicken scratching” dice to lay gems all over the board. It was a wonderful sight to see these pre-teens having such a blast with the game. I think Social Sloth has a great little family game here, which could be a minor hit if the word will get out about the game play. It has a mix of real time and strategy that is perfect in my mind for teens and pre-teens and whole families alike.

Lots of goodbyes came after that. I got to visit with Carla from Weird Giraffe Games, whose booth stayed busy all con. I also stopped by to see Mike Young with Plan B Games, and that’s definitely a booth I need to visit at Gen Con to play Era: Medieval Age.

That reminds me of the best parts of Dice Tower Con: spending time with friends, new and old. I enjoyed my early morning chats with Steve Finn of Doctor Finn’s Games. He’s got some really good news about his games coming down the pike, so keep an eye out. Playing games with the krewes from I Heart Board Games and Southern Board Game Fest was a big highlight. Finally, I would be remiss without mentioning some good chats with The Brandt of the Portal Games Podcast, who does one of the best game-replay-and-review podcasts out there. He and I have been doing the initial work on the Dice Tower Awards now for three years, but it is always nice to chat with him in person. Next time, we play Fleet Dice!

Let me know if you have any questions about the games we played or the convention in general. We are on Gen Con prep mode, and in fact, have a preview of our top anticipated games for the Con already on the blog.