In 2016, a game about mechanized combat in an alternate post-World War I universe rocked the board gaming world. Scythe designed by Jamey Stegmaier and published by Stonemaier Games blew up on Kickstarter, and then delivered to its fans a tight blend of Euro and Ameritrash game elements of resource gathering, events and combat feints.

Scythe rocketed up into the Gumbo top ten, and is still being played regularly both at Gumbo Game Nights, at the annual Southern Board Game Fest tournament, and on Steam.

I had Jamey on as a guest of Gumbo Live! back on episode 30, and this was just after he published a fan created expansion for Scythe called the Wind Gambit. In my usual schtick, I asked him if he would be willing to give odds on whether he would ever publish another fan made expansion off of BGG. He was pretty cagey with his response, and now I know why! Not too long after that interview, Stonemaier published another fan created game, set in the Scythe universe. Who would have ever guessed? Ah…if only I had known…

Does your game group like Scythe, but also like bite sized versions of the game? Do you have family members who aren’t into hobby games but might enjoy a friendlier version of Scythe? Or even better, do you have younger children or nieces and nephews that might enjoy an animal themed play of Scythe?

Well, then, Spice It Up with My Little Scythe. 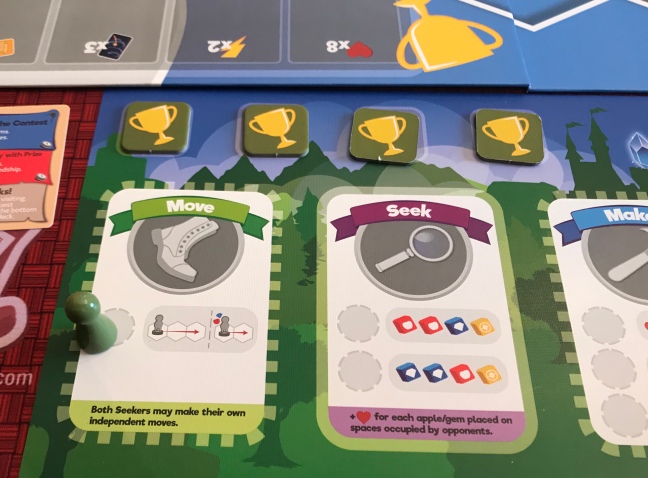 My Little Scythe is a 2017 game designed by Hoby Chou and his daughter Vienna Chou, with art from Noah Adelman and Katie Khau. It is published by Stonemaier Games, and plays from one to six players in about 45 minutes. Stonemaier Games graciously provided us a copy for review, as well as a Play-to-win copy for the Southern Board Game Fest back in April.

In My Little Scythe, players take on the roles of the animal companions made famous in the bigger game. Their goal? Earn the most “trophies” (a/k/a stars from Scythe) out of the eight potential scoring opportunities by the end of the game. First to four trophies triggers the end game, and these trophies are given for game events like upgrading their player boards, winning a pie fight, or delivering gems and apples to the giant castle in the center of the board.

My Little Scythe is yet another stellar production from Stonemaier Games, one of the hallmarks of the company. The game box is hefty, with beautiful art stylizing the animal companions. Inside, players will find a customized tray from Game Trayz that holds all of the cards, player boards, miniatures, and bits in place. Each player will have two miniatures depicting their favorite animal mascot from Scythe. They will use these “seekers” to find apples and gems, the currency in the game, complete quests, deliver goods to the castle and, of course, get into pie fights with opposing seekers.

The game board itself is huge for a game geared toward the younger set and gateway gamers, akin to a Ticket to Ride sized board. It is bright and colorful, and very easy to navigate. The board is divided up into different sections, which can be seeded with gems, apples and quest tokens by the players. And of course, there are magic spells, pie power and lots more. Other than it being a little tricky to figure out which way the seeker minis go in the box, there is nothing to complain about this Stonemaier production, but you knew that already, didn’t you. 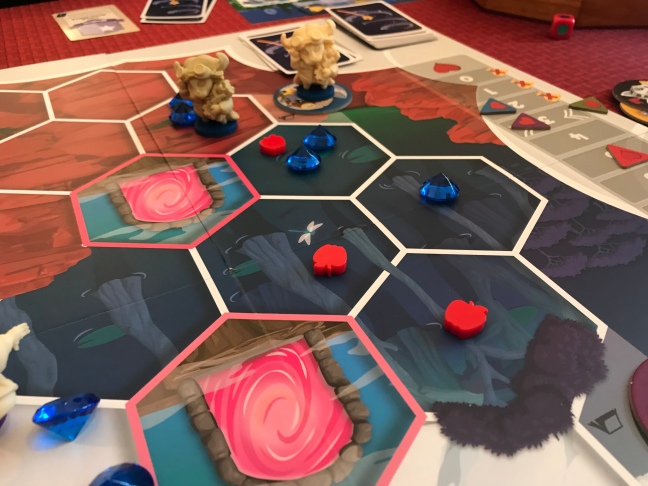 Each of the two seekers starts on a home base (the set up is player count dependent), and a random set of resources are placed nearby. The instructions for different player set ups are easy and intuitive. Apples, gems and quest tokens will be spread across the board. The apples and gems can be traded in to upgrade your character’s two potential powerful actions — movement and trading — or can be used to deliver to the center kingdom in exchange for a trophy. They can also be used to get more pies and magic spells.

Apples and gems can also be used as part of the encounters, which are called “quests” in My Little Scythe. When a player picks up a quest, that player grabs a randomized quest card, which gives options like in the bigger game. These can range from paying resources for a special one time benefit, or perhaps interacting negatively with another player that is close to winning, or even just getting more friendship points. 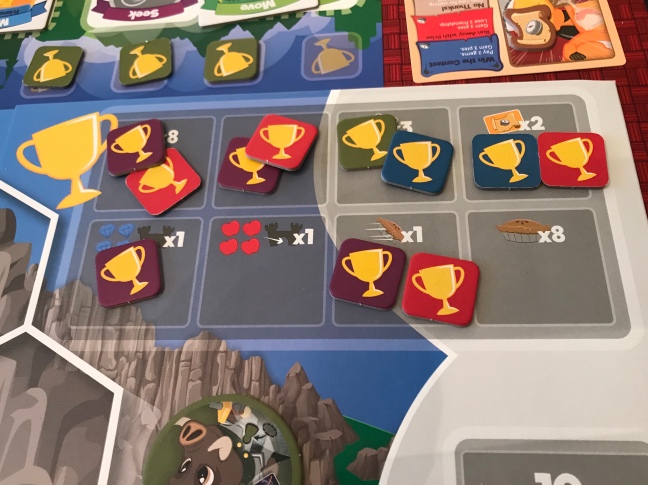 The friendship points replace “popularity” from Scythe, and it is a welcome change. Players can earn a trophy for improving their popularity, but can spend popularity (or more properly, lose popularity) for advantages on certain quests or even lose it for starting pie fights. Pie fights can get you a trophy, and force a player back to their home base — their character can’t be “picked on” twice in a row” but none of the trophies can be earned if your popularity is too low.

On each turn, analysis paralysis is limited even for the youngest gamers, because there are only six total actions to choose, spread unevenly across three colored spaces on the player board. Players can only choose one color to activate, and then one action on that color.

The actions are simple: Players can MOVE (with helpful illustrations on the board) their characters around the board; SEEK new resources by rolling dice and placing the appopriate resources on the board; or MAKE an upgrade to one of the other two actions. There are a number of different upgrade boards for MOVE and SEEK, and it is fun to explore how each of them power up your character differently.

The first person to score four trophies triggers the end of the game. Players are limited to scoring only one trophy each turn until that final round, then players will try to combo one or two trophy to take the win.

As you probably already know, the designer initially designed this as a fan expansion based on his daughter’s love of My Little Pony and his love of Scythe. Stonemaier heard about the PnP from BGG, and then began developing the game in secret.

My Little Scythe is a different game from its older sibling, but somehow retains the feeling of Scythe — moving characters (instead of mechs) around the board, upgrading the player boards, picking up resources, making deliveries to the center and throwing pies at each other, all to be first to complete the four trophies (and have more than everyone else when the dust settles). But, it is definitely more friendly than Scythe and takes a lot less time.

On the plus side, I love how the game looks on the table. The miniatures are so well done, and are fun cartoonish representations of the Scythe animal companions. Fans of Scythe will instantly recognize their favorites, and kids will be drawn to choose their favorites from the animal world.

I love how quick the turns geaux. Decisions are generally fast and furious. Move your seekers here, to set up a battle or quest. Spread gems and apples to your friends, and rocket up the friendship chart. Upgrade your player board in two easy steps. There is rarely much AP…until the final round that is.

I love how the designers have taken what we love about Scythe and distilled it into a bite sized package. The threat of combat keeps everyone honest on the board, just as in the big game. The portals are close, so your friends and enemies are closer. And everyone is gunning to have two trophies waiting to be completed in the last round. 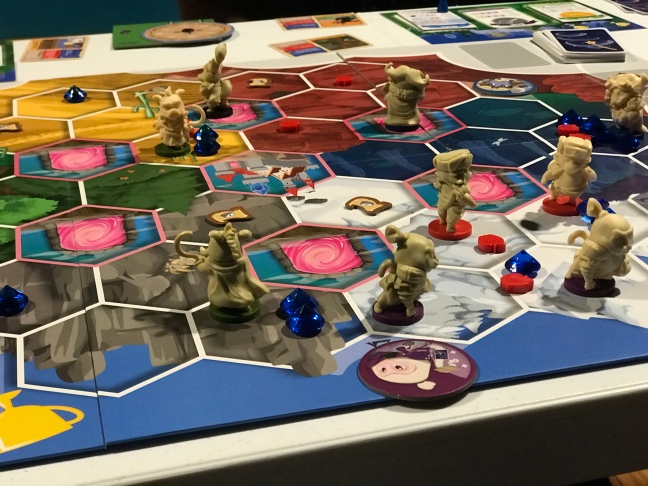 If there are any disappointments, it is that I have had a lot more fun playing this with my family or with gateway gamers / newcomers to the hobby than I have had playing with fans of Scythe. That’s to be expected, right? As my son Jack says, he’d rather spend twenty more minutes playing the big game than My Little Scythe.

Yet, my older son Matt also said it best — this is a great beer & pretzels game with his game buddies, who are not yet into board games but want to dabble in the hobby. It is a keeper for my collection, but I just wanted to warn those out there expecting the same deep gameplay as Scythe.

If you are a fan of Scythe, or have preteens in the house, or just want a beautiful beer & pretzel game with tight mechanics that plays in about a half an hour to forty-five minutes, you should try out My Little Scythe. If you are looking for a deeper experience, then maybe the big game is what you are looking for instead.