The cacophony of hellos, goodbyes, cheers, and cries has subsided, packed away into the boxes of cardboard we tiredly toted to our game shelves back at home. That can only mean one thing:

A record 70,000 gamers converged on Indianapolis this past week for Gen Con 2019. The Krewe de Gumbo was there, and we’re working on a big update covering everything we saw and played.

But in the meantime, we did a quick poll amongst ourselves of the games we liked that were new to us at this con. This is not a scientific poll, just four gamers from Louisiana who played as many games as we could. Some of us were pretty busy as demo volunteers for Grey Fox Games, so our time was limited. But, hopefully this list gives you a starting place for some research on what games you want to play and buy after Gen Con. 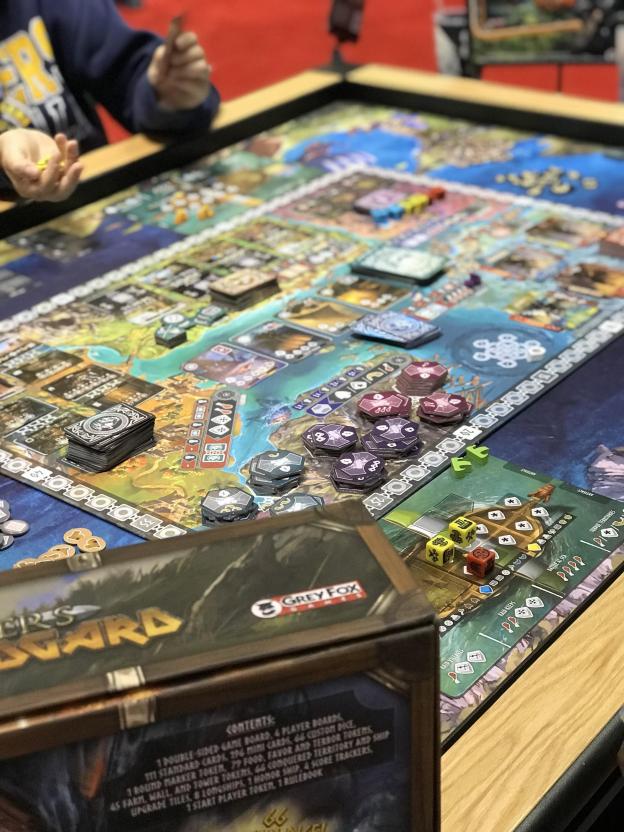 Speaking of the Fox, since some of us were volunteers for at that booth, we did not include Reavers of Midgard and Run Fight or Die on the list, even though they probably belong. First, we’ve already played these two games a ton before the con so they were not really new to us, and second, you probably already know from the show how much we like those two games. But, consider them games that we would have included except for that caveat.

This was a hard list to whittle down. I played thirteen new-to-me games this year at the con. That may not seem like a lot, but remember, I worked five shifts from Thursday to Sunday. Missing prime time in the hall makes it tough to play a lot of games. Plus, some of the free time I did have was spent in meetings or Gen Con events.

Easily ten of the thirteen games were all games I would have been happy to buy (or actually did purchase). There may not have been a lot of perfect 10s this year, but there were tons of very-solid-to-excellent games. Also note that some of these may not be new to you, but are new to us, and one or two are not yet available but should be in stores or on Kickstarter this year.

Enough blather, let’s get on to the lists (with commentary!)

And now for a little bit of commentary about the games.

Watergate was probably number one on my list to play, and I actually pre-ordered it to make it easy. The pre-order was a great idea for Clay at Capstone – he ran a special where purchasing a game off the pre-order gave you an additional $10 off any other game. That meant that Ragusa came home with me too without a demo, but it was number three on my list of games to buy so I was happy to save money!

The play of Calico happened unexpectedly. We were playing games with the Weird Giraffe krewe, and one of them suggested we try Kevin Russ’s advanced prototype for a game coming out on Kickstarter soon, Calico. It’s a tile laying game but using cool hexagon shaped tiles in a dizzying array of colors and symbols. I loved how there were so many different ways to score points, yet the pieces did not just dictate the play. I felt agency in the way I was laying out my board and what bonuses I wanted to work towards. It is a nice, friendlier version of a Uwe placement game. This one is coming out on Kickstarter soon, and you should at least check out the game and its beautiful cat-focused art.

Medium and QE were both games I had researched heavily, and they both delivered body blows of fun. I played each one multiple times with different play counts. In Medium, pairs of players try to score points by guessing the “medium” (or connection) between two words played by the two players. You have only three rounds to shout out the same word! Not too brain burny, but oh-so-much-fun. In the second and beyond plays, we started adding in the advanced cards, which let you do everything from getting a mulligan on your hand draw to a very powerful “fourth chance” at guessing the right word. I would not geaux back to regular Medium after that.

Q.E. is a game I’ve researched for a long while. Players take turns bidding for ownership of stuff, but the twist is that there is no limit to how high you can bid. The only limitation? Whoever bids the cumulative highest amount when all of the tiles are acquired is automatically disqualified from winning. Harsh? Nope, it’s just a lot of fun, and I won’t turn down a play of it.

Architectura is an interesting little card game that Jayson and D-Rock brought to The Secret Cabal meet up. Architectura is one part card tableau builder, one part special power playing mechanic, wrapped up in a quick playing game with a lot of thinky strategy requirements for such a small box. This was not my favorite of the games, but the room was loud and I never quite groked the scoring mechanic until the very end. I’d play it again, just to see if I could get a better handle on how the scoring worked, but this was not a must buy for me.

Obscurio showed up on a few lists above. Take Mysterium and add a traitor mechanic and a beautiful production and you’ve got an idea as to the game play. We played this a couple of times at the JW Marriot with the Slidell krewe, and by the end of the second play, my mind decided that Mysterium was dead to me.

Honorable mention for me was Merchants of the Dark Road. Unlike Calico, which is technically a prototype but in reality was just missing some artwork for the final Kickstarter push, Merchants was still in deep proto form. It’s a rondolicious game by Brian Suhre (he of Coldwater Crown fame) about traveling medieval traders trying to improve their fortune and reputation by delivering magic goods to faraway lands. It’s still early, and I only played a turn or two, but I like what I saw so far.

Sanctum – In much the same way Adrenaline captures the feel of a FPS, Sanctum captures what it’s like to play a ARPG. For me this is particularly exciting since I have been playing games like this for as long as I can remember. The demo at Gencon was only 3 Acts when a full game would be 6 Acts plus a boss encounter, so my information about the game is limited. What I was able to play, I enjoyed. You really do feel like you’re running through a dungeon, grabbing loot from defeated enemies and using it to beat even stronger enemies. My eyes will be on Essen for a full release of the game.

Teburu – I was very hesitant to put this, and even Sanctum, on my top picks for Gencon considering they aren’t even released games. Teburu impressed me a lot more than I thought it was going to, though. The first game for the system will be Zombicide Evolution- Las Vegas, a return to the present day instead of a medieval or futuristic setting. Unfortunately the system will not be backwards compatible when they launch it in 2020, so no playing Green Horde right away. What Hearthstone did for CCGs I feel that Teburu can do for board games, and that potential has me really excited.

Obscurio- Finally we get to a game that actually released at Gencon! I was so impressed with the demo of Obscurio that I immediately got in line to buy it (and the Asmodee line at Gencon is quite a commitment!). Obscurio is really a happy blend of Mysterium and Deception: Murder in Hong Kong. You get the puzzley elements of decoding what an image means, like in Mysterium, with the social deduction of finding the traitor, like in Deception. If you like either of these games I think you’re going to like Obscurio, and if you’ve never played either game this is a great place to start.

The King’s Dilemma– My favorite demo of Gencon was this new release from Horrible Games. It’s a legacy-style game with a lot of fun campaign elements that alter the game as you play through 15 scenarios. The only reason it’s not higher on this list is exactly because of the campaign aspect. With my group of friends, getting through a campaign game can be a chore. I think if I could talk 4 other people into actually playing through the 15 game campaign this would be one of my top games of all time, but that high bar of entry has me hesitant to even buy it. 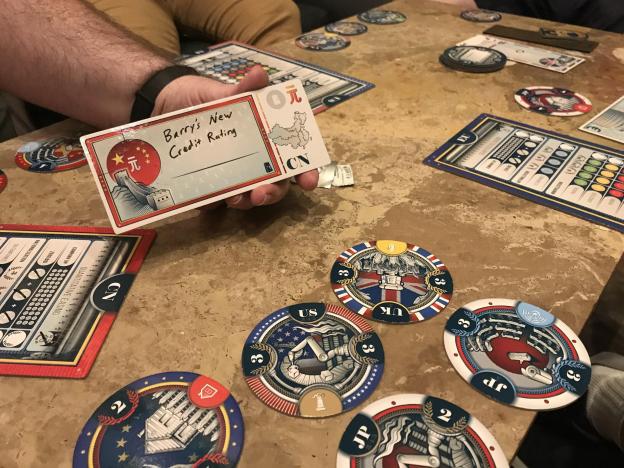 QE– I may have played more Medium during Gencon, but this was the game of the Con for me. QE is a bluffing/push your luck game where you can bid whatever you want to win auctions for tiles that give points, but the person who has bid the most at the end of the game is eliminated. I am absolutely useless at these types of games, as my personality is far too conservative to ever compete against a group of friends who bid with wild abandon. The fact that I can play this game with full knowledge of how poorly I’m going to do, and still enjoy it, says a lot about the game!

Mystery House– Every year at BGG.Con, My friend and I make a point to play every new Unlock and Exit game. Puzzle games are just something that appeal to me in general, but I rarely feel the need to own them. The reason for that is simple, you only get to play them one time; once you know how to solve a puzzle there isn’t much point to playing it again. Mystery House is definitely a puzzle game, and it doesn’t solve the problem of only getting a single play out of it. However, it is just so cool that I actually want to own a copy. This game is more an activity than it is an actual board game (making it similar to games like Detective and Chronicles of Crime, at least to me), but if you enjoy those style of games you are going to love this one!