Hey board gamers, BJ from Board Game Gumbo here, back with more Louisiana flavor and tales of board gaming from the Krewe de Gumbo. It is a bit nippy down here in South Louisiana, but that just means more quality time playing board games at Gumbo Game nights with our friends at Anubis Game & Hobby.

We had a visit from an old friend, Jeff from Hattiesburg. A running joke we have in the group is that Jeff and I never get to finish a game together. Could we do it this time? 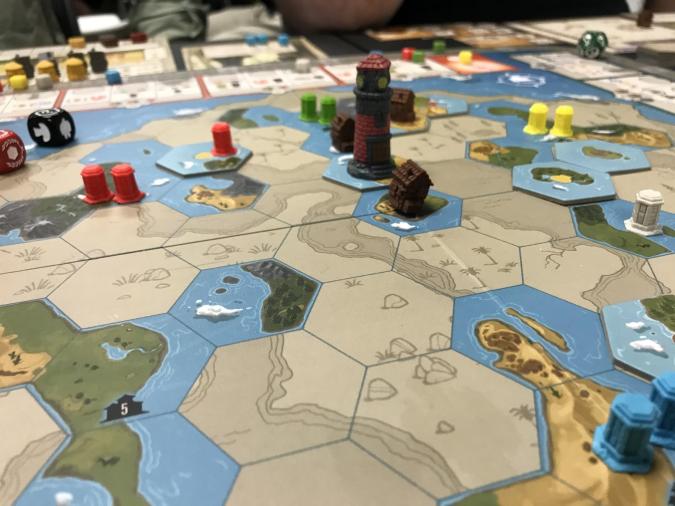 Bayeux Self, The Loneliest Tapestry Around

Stonemaier Games sent us a review copy recently of Tapestry, and it has been hitting the table a lot. With Phillip and Jeff joining us for the first time in months, and both wanting to try, we decided to give Tapestry a spin on the table. This was my first chance at playing a five player game of Tapestry as Carlos and Bryan joined in, too.

The teach and set up took us about 20 minutes or so, because both of the new players had already watched Rodney Smith’s Watch It Played video beforehand. (I also watched Stonemaier Games’ “How To Teach Tapestry” video, too, and can recommend it highly.)

Tapestry is a civilization themed engine building game designed by Jamey Stegmaier, with art by Andrew Bosley and sculpts by Rom Brown. Players take on the role of one of sixteen different civilizations vying for control over a central map all while upgrading their civ and building out their capital city. Players play over five eras, advancing at their own pace (a la Everdell), ending each era with a big income turn to replenish the resources and score most of their points.

Gumbo Live! viewers know that I have been a little critical of the production and game play, a lot of it based on my first play. I’m not a big fan of the central board or the landmark building, and the first time I played, it felt like the game play parts were greater than the actual sum. But, Tapestry has become a pleasant surprise for me:  the more I play, the more appealing the game becomes. There’s just so much to explore.

I played the Nomads last night, and they were simple and straightforward to play with a very intuitive strategy — as the Krewe will tell you, that’s my kind of faction! They appeared to me to be focused on exploring the board as much as possible, using houses on the player board to score points for control. I even used some of the landmark buildings as outposts, which admittedly spiced up the board’s look a bit.

Playing the Nomads was the best experience so far that I have had in Tapestry. I honestly got so excited by the simple but effective strategies that I saw, that when I got home that night, I researched other recorded game sessions on BGG just to see if the way I played them matched up to what other people have done. That’s the mark of a very interesting game to me, much like Concordia or Gloomhaven where I want to learn more and drill deep into the gameplay.

Plus, like any Stonemaier Games production, there is way more to like about the production over the quibbles that I have with the aesthetics of the central board. I am a big fan of the design and iconography on the player boards and cards. Even the new players agreed that you can learn most of the game just from the symbols and helpful instructions built into the bits and cardboard. I also think the card art, playing pieces, and textured feel of the cards and player board are big pluses for the game.

But back to the game. I raced out to an early lead but could not hold on. A tactical error in rushing the central island incorrectly plus two errors in conquering one of my neighbors cost me 25 points all total, and I came out second by only 9.  We finished oru play in just a little over two hours, which was not bad since 40% of the players had never played before. Hey Jeff, we finished a game!

Roux Dat Says: I had a good time building up my Nomadic canvas tent wall down the central part of the map and making it hard for the other players to explore our sacred and beloved Western deserts. Our canvas is mighty! I am so ready to play Tapestry again, because it is one of those games that has me thinking in between plays about what I could do better next time. 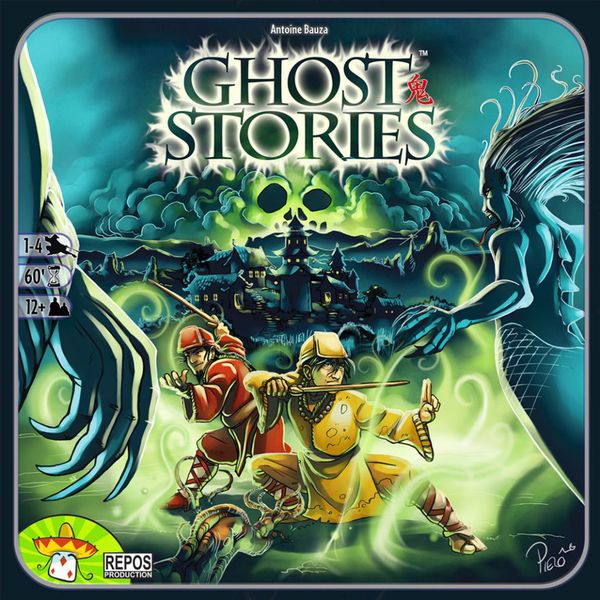 I’ve Got The Haunt-vie For More Bauza Games

With the news that Repos Production is putting out a new version of Ghost Stories, updated with tweaks to the rules and characters and reissued with a fantasy theme, I knew it was finally time to play the original. I am a big fan of Antoine Bauza, but every time Ghost Stories has hit the table on Gumbo Game Nights in the past, I was always too late to join in. Plus, the game play I have seen looks insanely hard!

Ghost Stories is a ridiculously tense co-operative game themed to spirits attacking a small village. Players take on the roles of unique characters with special powers attempting to defeat the “Lord of Hell — Wu-Feng — and his legions of ghosts” before they can come back to life in our world.  Unlike most co-ops, where there seems to be an ebb and flow to the danger scaling up to chaos all over the board, there is always danger coming at you and building up every every single round. There’s literally no let up! Keep the villagers safe until the big bad shows up, and then defeat the baddie to win the game.

We played a two player version, each controlling two sides of the board. I played the blue and green characters, and my favorite power was the double action that the blue hero gave us.  There were so many little additions that made the game great. Most cards were hard enough to handle, but the ones with howlers on them were especially tough. The tension was palpable every time they popped up on their board, as they loomed over or tiles.

I can see why so many people like Ghost Stories. The puzzle of choosing which actions to take on the 3×3 grid of village spaces, the co-operative nature of the players and their powers, and the impending doom you feel as the board state quickly spirals out of control are all top notch experiences. We won, but we cheated a bit by messing up one rule that might’ve made the difference. No matter, it is a tough game but a lot of fun and very thematic. 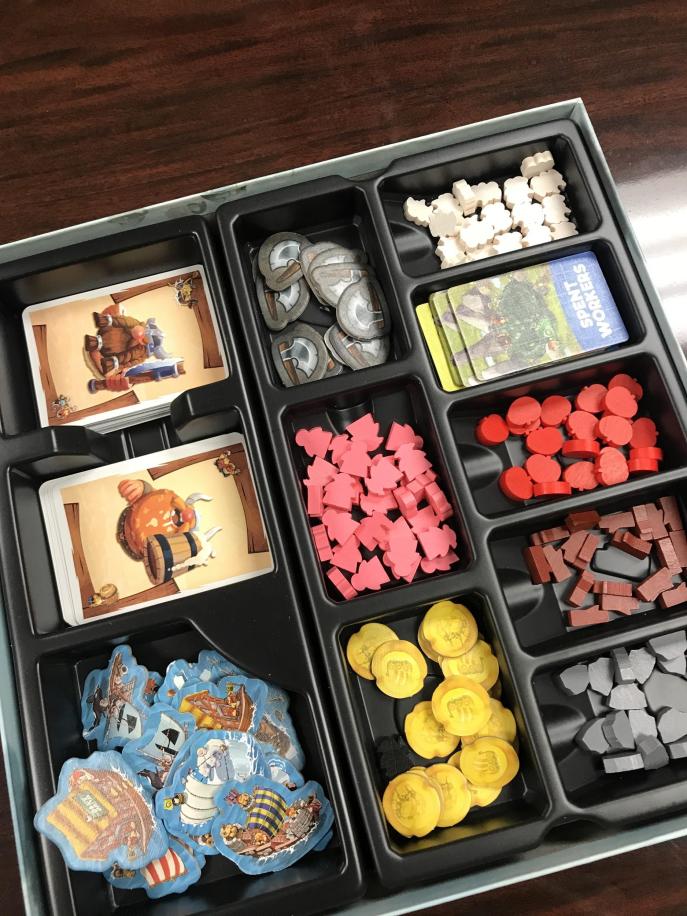 I’ve loved Imperial Settlers since the first time I played it at Gen Con 2016. I especially love it at two or three players (four is too much), and I always get excited when the newest factions come out.

So I was super, super happy (as Ignacy would say) when Portal Games announced a new version, Imperial Settlers: Empires of the North. It promised to be a shorter, easier to learn but yet still combolicious version.

Would it breath new life into the franchise?

I’ve only got a couple plays in so far, but Empires of the North is a lot of fun. We played a two player game, with random factions. My faction was basically all about sending Viking ships out to islands to collect land cards, and I did it with gusto. My favorite part of the new version so far is that sailing mechanic. I love seeing the new cards come out knowing that with a good strategy and a lucky draw I can snag the best island.

My least favorite thing so far is the circle of actions. It is sort of like a mini-rondel that gets randomized each game. I get what the designer is going for, and after a few more plays, I’ll probably get the hang of it, but it seems kind of forced in the game. I’m also not a big fan of the art on the ships as they are not distinguishable very easily, at least to my eyes.

But those are minor quibbles. I absolutely love the art on the player decks, the quick pace of play, and the satisfying card play. Plus, the components are similar to the fun little bite sized bits we’ve come to expect from the franchise.

Roux Dat says: I’m undecided if I like it better than the original, but the twist in the mechanics is certainly enough for me to keep playing. The individual turns and the entire game itself does feel faster, and that’s a plus. I am anxious to try it with my sons, who both love the original.

So, that’s it for Gumbo Game Night and our post-game quarterbacking session. Roux Dat will be back with more commentary and reviews about the games we are playing. Is there a game that you would like to suggest for the next Roux Dat? Send me a tweet @boardgamegumbo and let’s chat about it.