With all due apologies to Gerardo Parra and his infectious walk up song, the number one thing that most children love is dinosaurs. The reptilian monsters come in all shapes and sizes, and kids just love them. Judging by the success of the Jurassic Park movies, adults like ‘em, too.

But what if you invited some of your favorite dinosaur buddies to a proper English tea party? Wouldn’t that be just divine? As they say in London, you can’t get a cup of tea big enough or a book long enough to suit me!

If your family likes to play guessing games and loves a good dinosaur themed experience, let’s spice up your family game night with Dinosaur Tea Party. 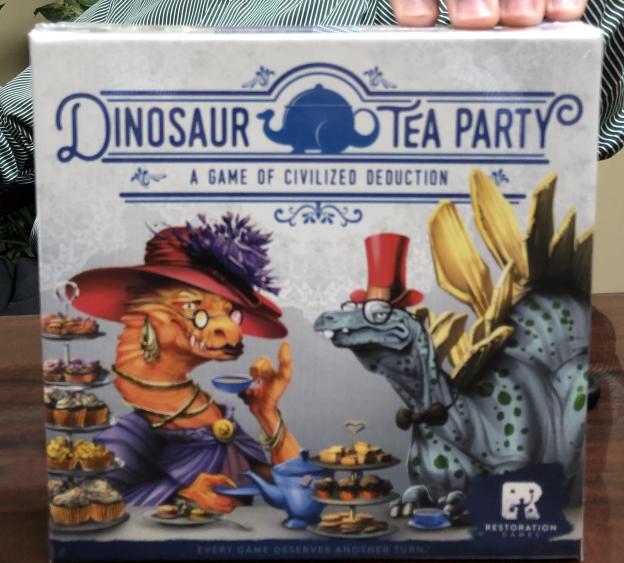 Dinosaur Tea Party is a 2018 release from Restoration Games designed by the main team from Restoration: Rob Daviau, JR Honeycutt, and Justin D. Jacobson. The game takes about 15-30 minutes, and features interesting art from Marjos Gebresselassie and Jason Taylor. As is typical for Restoration Games’ releases, this is a “refresh” of an old game from the 1970s called “Whosit?”, sort of a British version of our typical “Guess Who” style games. In our plays, the game played very close to the 30 minute mark.

The premise of the game is simple. We are at a proper British tea party, but we cannot remember the names of all of the guests! Oh bother, whatever shall we do? Let’s ask questions of each other, making very polite small talk, of course, and mayhaps that will trigger a memory or two. 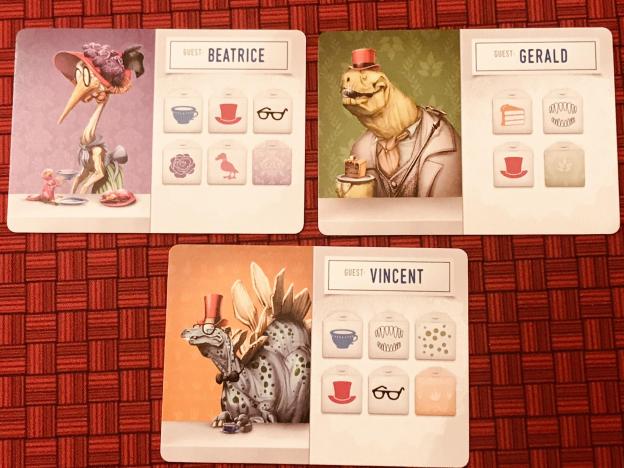 Restoration Games are known for their bright visuals, and Dinosaur Tea Party is no exception. In the box, players will find 20 large dinosaur cards, with matching dinosaur cards. 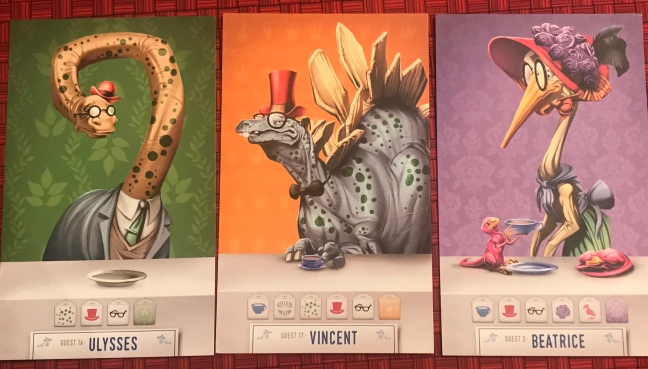 The dinosaur art is very whimsical, as each dinosaur is depicted with a different type and tons of different attributes: the color of the room they are sitting in; whether they are eating or drinking; whether their skin is spotted or striped or neither; wearing glasses, or hats, or a flower or jewelry, etc. There are 15 or more different attributes to view on the dino cards, and players will get copies of those traits to help them try to guess the dinos.

Players will have a chance to earn “sugar cubes” (or victory point cubes) each time they correctly guess another dinosaur. And to Spice It Up, the designers added three “quirk tokens” — more on those later.

All of this is packaged in a nicely sized, small square box that is easy to throw into a game bag for game night or pull out and set up quickly for your next family game night. I have no issues with the presentation at all, as it is definitely well produced for this weight of game.

The idea behind the game is simple. Players will set out the twenty dinosaur cards in a five by four grid. Each player will have a set of the trait tokens to keep track of their own guesses. Each player will also be given a random and secret dinosaur card — that’s who they are playing for this round, until someone guesses who you are.

That’s the entire set up. Next, the youngest player will then one of two things, either politely inquire as to someone’s trait or make a guess as to what their name is. The questions are simple and intuitive. The player will turn to another player of their choice and ask something like: “Hello, gov’nah. What a lovely tea party! Are you perhaps wearing a hat right now?” The other player must answer truthfully, and both parties should do the question and answers in their best proper British accent.

If the guest answers YES to the question, then the asking player gets to take another turn until someone says no, or they guess the name of the other player and get it wrong. If either of those happen, the player’s turn is over.

Sounds simple? It is a little bit (but not much) trickier through the use of the “quirks” tiles. For added spice, players can randomly add three quirk tokens on the dinosaur cards. At the start of the game, three of the dinosaurs will have one of three rule breaking quirks. For instance, one of the dinosaurs will always answer no, no matter what the answer is supposed to be. Of course, our job is to figure out what dinosaur has that quirk!

Once a player has a good idea what one of the other player’s name is, instead of asking a question about an attribute, they can “guess the name”. If they are right, they get a sugar cube, and if they are wrong, the turn ends.

My wife and I play a lot of games with family and friends who are not into deep, heavy games. We also started a high school game group that has a limited amount of time and a wide range of experience. There’s a core group in that high school game club that enjoys shorter games with lots of deduction. Games like Chameleon or Deception: Murder In Hong Kong or Coup are super popular at this club.

And so, I brought Dinosaur Tea Party to the game club, with a little trepidation because of the theme. I should not have had any hesitation, because these high schoolers had a lot of fun trying on outrageous accents and asking polite questions. Sure some of them were focused solely on getting those sugar cubes, and we made sure not to “force” any roleplay for someone not comfortable with it. But most of them really hammed it up. I was actually impressed with some of the teens ability to mimic their favorite British accent and to ask questions in a very polite manner. It was almost like being at a real posh British affair!

Any downsides? Of course. As we discussed on Gumbo Live! recently, it is not a game that the Gumbo krewe had any desire to play. Sure, they’ll role play D&D or Pathfinder every Friday, but give them a chance to role play a dinosaur from Liverpool and there were no takers.

That just means that Dinosaur Tea Party is not one of those “one size fits all” games. If your game group does not mind being a little silly, and especially enjoys pure deduction games, I think they will have as good a time as the high school game club does when we break it out.

That reminds me, it is almost tea time here in Louisiana. Time to put a pot on and play some more with the family!

If you like deduction games, and have a game group willing to get silly, give Dinosaur Tea Party a try. For something with a little more depth — and without the British accents — Cryptid has been a big hit with our groups.