If you follow me on Twitter, you know that I have some little ones around the house that are just getting to the age of gaming. They are a little too young to understand any game with strategy or complex rules, but as most of you know, there is a company that specializes in bringing fun to gamers who are not ready for those kinds of concepts yet.

HABA USA is well known for their “yellow box” set of games, and they have all been family favorites. We’ve spent a lot of time trying to save an orchard from a happy crow, or help rabbits race across boulders, or any of the other titles.

That’s why I was excited to receive a review copy of Valley of the Vikings (known in Germany as Tal Der Wikinger”), the 2019 Kinderspiel des Jahres winner from HABA Games.

Valley of the Vikings is designed by the husband and wife duo of Marie and Wilfried Fort, French board game designers who have a few other successful titles under their belts, including the highly regarded Snail Spring! The art in Valley of the Vikings is by Maximilian Meinzold, and the play time is about 15-20 minutes on the box (and holds true in our plays).

Although it is a “yellow box” edition, it is not one of the “my first” types of games that HABA puts out. Instead, the age range says six years old and up, and I agree that it is an appropriate starting point for understanding all of the rules. But, kids as young as three years old have had a lot of fun just playing the game. Your mileage may vary.

HABA is known for its beautiful productions, and Valley of the Vikings is no exception. The box is the same size as their usual book shelf games like Karuba. Inside, you will find a modular board that fits together like a jig saw puzzle to depict a little village area suitable for Vikings, complete with a long dock at the top. There are prepunched holes at the top and in the middle. The holes on the dock is where players will insert the randomized bonuses that the players can get during the game, things like coins or showing each colored viking symbol. 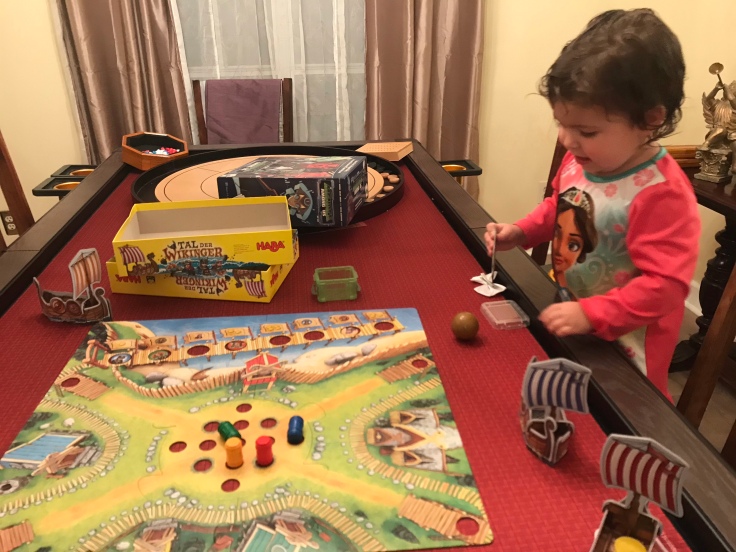 The middle is the “bowling area”. That’s right — at the heart of the game, Valley of the Vikings is all about a friendly bowling contest between fellow Vikings, where the winner of each bowl gets gold coins, as long as they don’t fall off the dock into the water. Okay — the theme is not quite coherent, but does it really matter? It’s all about bowling and getting coin!

The rest of the production is typical HABA quality. A thick bowler — essentially a Viking complete with helmet on a sturdy piece of cardboard — and beautiful viking boats, each in one of four different colors matching the plastic barrels that are placed into the center of the village. Finally, there are some gold coins (and these are the only disappointment, as they are just plain standard thin cheap plastic poker chips. I was hoping for something with a little more heft and maybe a little viking symbol!)

Valley of the Vikings is oh-so-simple. Lay out the board pieces together, give each player a viking boat, and place their matching colored barrel in the center of the board. Randomly fill the top row on the dock with the reward tokens, consisting of pictures of coins or vikings. Once the dock is filled, each player will take turns using the Viking Bowler to push the giant plastic bowling ball toward the center of the village, knocking down the barrel “pins.” Each pin that is knocked down will cause that viking’s player card to move down the dock one space at a time, unless another (or more) viking is on the landing space already. If that happens, the viking “leap frogs” until there is an open space. 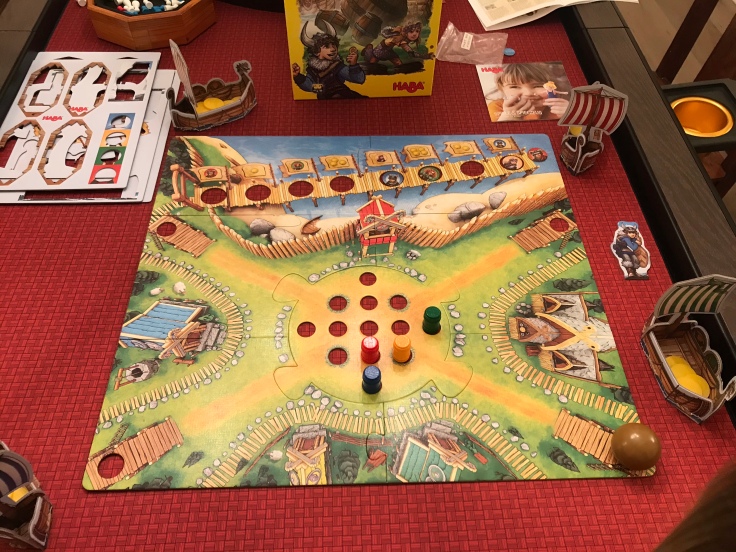 Once one of the viking player cards moves off of the end of the dock, they have “fallen into the water.” Play stops immediately, and scoring commences. If your viking player card is on a dock space with a picture of coins, you get that many coins for your boat. If the player card is on a space with other player’s pictures are, or on your own space, then coins will be traded. Once all of the coins are gone, the game ends and the player with the most coins wins.

The game plays well from two to four players, because even with lower counts, all four boats are used. Each player then needs to keep an eye out not to give the non-player too many coins, or risk losing to the dummy player!

I have been intrigued about this game ever since it was nominated (I had not known about it before) and then having a great chat with Jambalaya Plays Games on Gumbo Live! back in September. For little kids, the fun is just in tapping the ball and making those pins fall down, and of course, getting coins in the boat.

But even for adults, there is an interesting challenge in trying to move the vikings down to put them in scoring position, that will keep most older family members in the group engaged in the game. Vikings can only move one space at a time and only when their barrels are knocked down, but as Jambalaya said in the video, you can time bigger moves by leap frogging over other players to get the viking in the dock space you want — and then get someone to fall off the dock to pay out for your boat!

The game is easy to set up, quick to teach, and looks amazing on the table. The kids in our family took to the bowling part right away, although they are really too young to understand the scoring. They do love getting those coins in the boat, and so far, are not too upset when coins are “traded” since they know that they will likely get more.

I was asked the other day if it will hold interest for older kids, in other words, is it a game like Karuba that would work well as a family game. I think it is on the border, and will be family dependent. The fact that there is a little bit of dexterity will be fun for some and not for others. The way the vikings move down the dock, and the fact that players can control the movement once the pins are knocked down, means that older kids and adults do have some strategic decisions to be made. The decisions are pretty straight forward, however, and so that is why Valley of the Viking is a kinderspiel game, not a spiel des jahres weight game.

So, I give it a thumbs up for a game to play with your young ones and pre-teens, but where the whole family can actually enjoy making some of the strategic decisions. It is way lighter than Karuba or Ticket to Ride or any other great family game, however, so just know that going in. This is a yellow box game after all!

If you are looking games for really young ones, check out First Orchard or Rabbit Rally or Hungry as a Bear, some of our family favorites all from HABA USA.