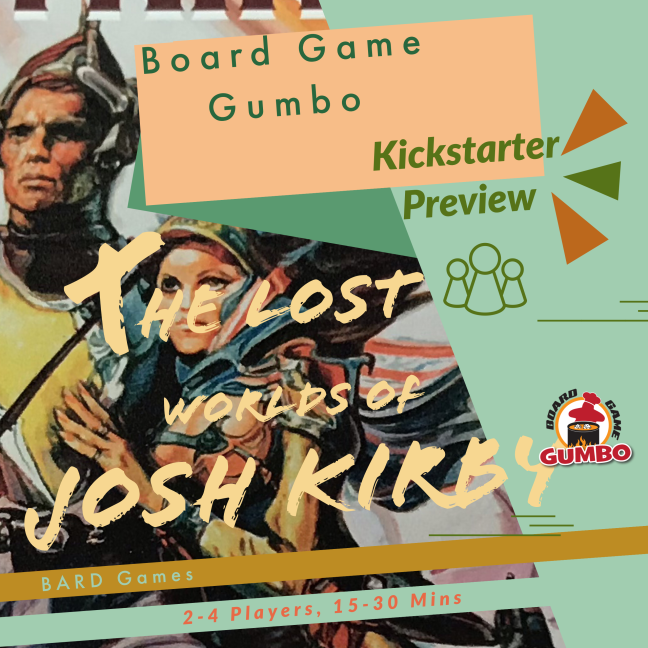 (Disclaimer: For the purposes of this review Board Game Gumbo was provided a pre-production copy of the game. Certain components may change from the time of this review to retail distribution.)

The library of my high school had a smell that called to me each morning. My section had assigned seating in the library on rainy days while waiting for the first bell to ring, and that was also my “homeroom” during my junior year. I was fortunate to sit near stacks of classic sci-fi novels by Ray Bradbury, Edgar Rice Burroughs, and many more in the shelves. I didn’t know his name back then, but that was my first exposure to the wonderful art by Josh Kirby. 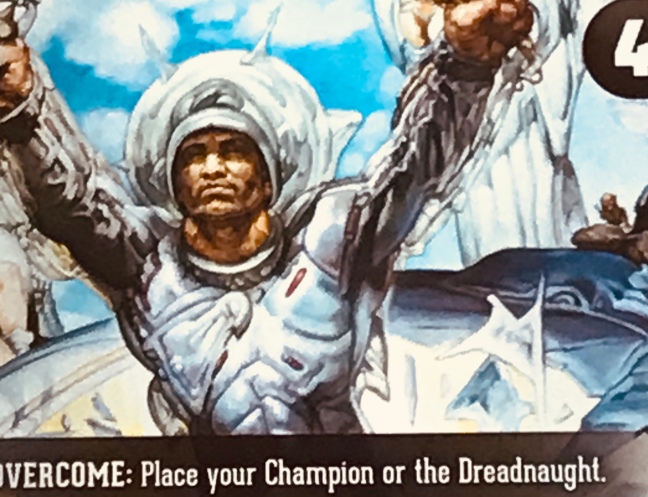 I still remember reading the early 1960s editions of Fahrenheit 451 and John Carter of Mars and The Illustrated Man, but what attracted me to a lot of these books was not the back cover describing the plot. Instead, it was the fantastical art picturing brave heroes and strange far away places. Much of the artwork for novels of that era was done by Josh Kirby, and he went on to producing art for the Star Wars films and for Sir Terry Pratchett’s beloved Discworld saga.

I ran into Brandon Raasch from BARD Games at their booth at BGG Con this past fall. We chatted about the success of their previous game, Fickle, which we covered on the Dice Tower’s Crowdsurfing segment. I spied a beautiful cover on the back table, and asked him what was the scoop on this artwork. Brandon launched into a tale of how famed artist Josh Kirby had a whole world of artwork that had never seen the light of day. BARD Games had the rights to use the entire portfolio in a game, and had just the right design for it. 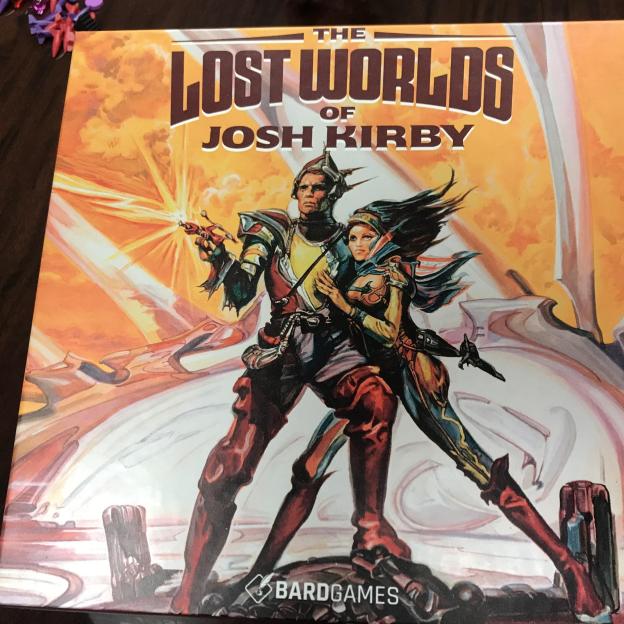 The Lost Worlds of Josh Kirby is a brand new Kickstarter project from BARD Games for 2-4 players, designed by Jordan Nichols (designer of We Need To Talk). Let’s take a look at the game:

The premise is simple: Players are intergalactic explorers, out to settle or conquer planets all over the galaxy, represented by some of these new paintings from Josh Kirby. Each player has six ships and a card representing their home planet. The home planet lists all of the actions a player can take on their turn, but even more importantly, it has the “morality track.” 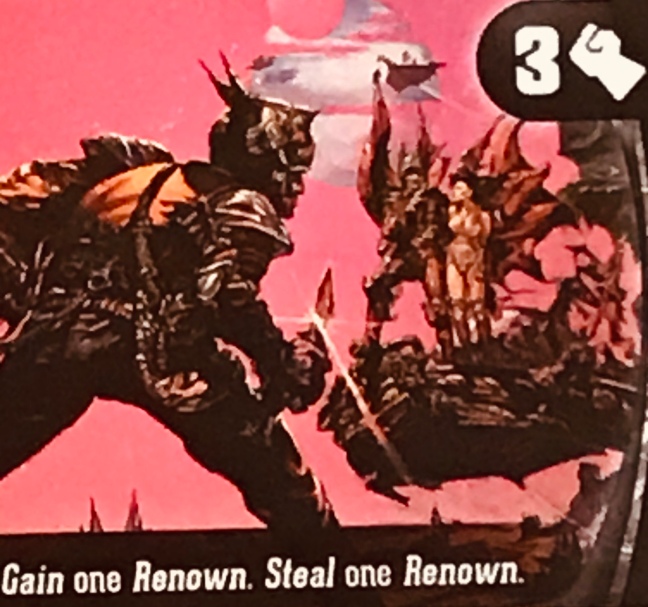 That’s right — players aren’t just exploring the cosmos, but they are also deciding during the course of the game what kind of explorer they will be. You can lean more toward planetary conquest — or choose peaceful settling as your strategy. Your decisions, even in this short 30 minute game, will have consequences.

Players will roll three dice on their turns, and get rerolls of those dice (depending on how far on the morality track they have gone). Once they have locked in their dice, it is time to take actions. Players can send rockets from their home base to the planets in the galaxy (represented by the Josh Kirby art cards) on either the conquer or settler side. 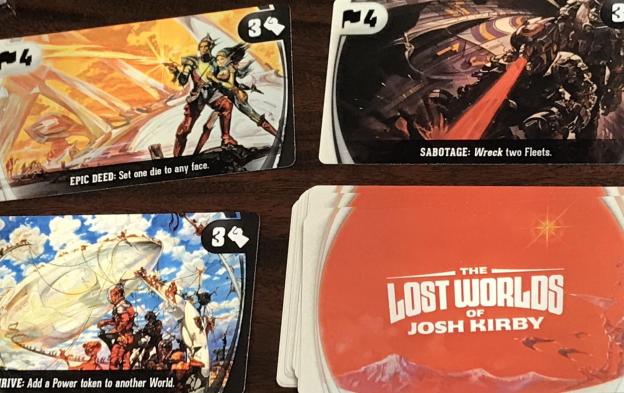 Each card has a different value for the two types, and players only have six ships, so choosing wisely is important. Once players have enough ships on that world to conquer or settle (including any special powers they may have from previous worlds that are in their personal tableau), they will move all of the ships on the card (including their opponents) to the warp area and take the card from themselves. 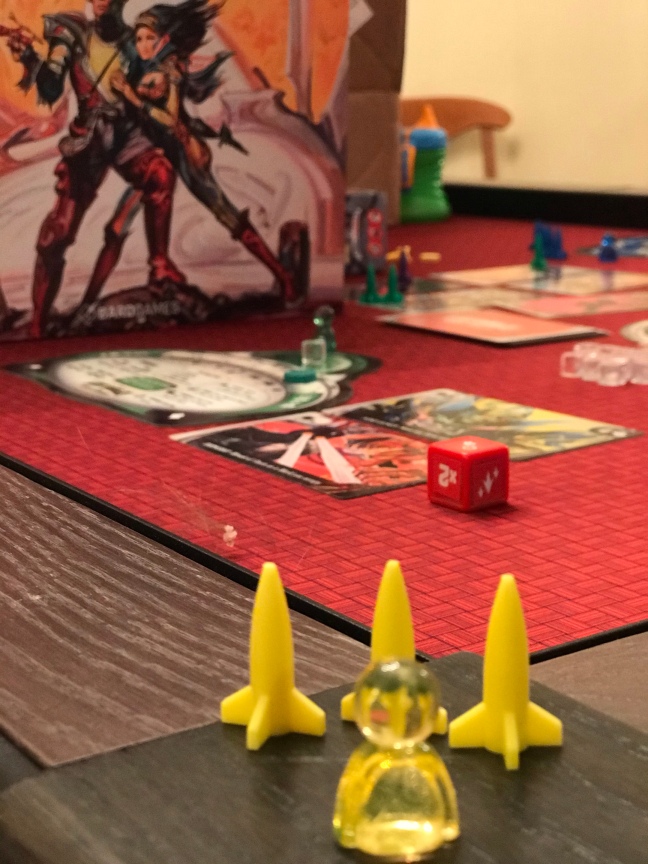 Players could also choose to spend actions getting “renown”, basically, the money in the game which allows players to purchase one time special bonus powers like Placing A Champion (which makes it easier to gain world cards); Placing A Dreadnaught (which locks the planet from other players); Playing A World Power (i.e. using the special powers of the Josh Kirby worlds in their tableau); or Using the Epic Dice (giving them access to a red die with crazy bonuses). 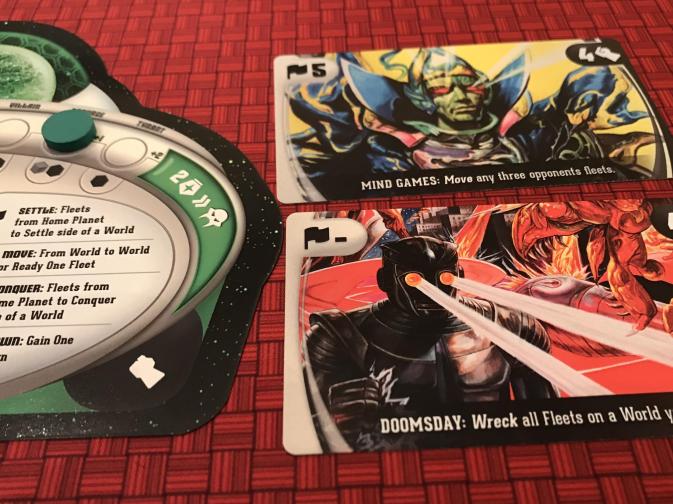 Finally, the players could choose to move ships between worlds, or ready them from the center of the table, or gain one renown. Once players have resolved their dice, they can play a World Power and then the turn moves to the next player. First player to a certain point threshold from the world cards, not counting the bonuses on their player boards, triggers one final turn for the other players and then the space empire with the most points wins.

We were provided an early prototype of the game, that did include most of the components and a lot of the Josh Kirby art. Check out the Kickstarter page for the latest information as to the quality and types of components that will be in the project. But that’s not what you are interested in — you want to know about the Josh Kirby art! 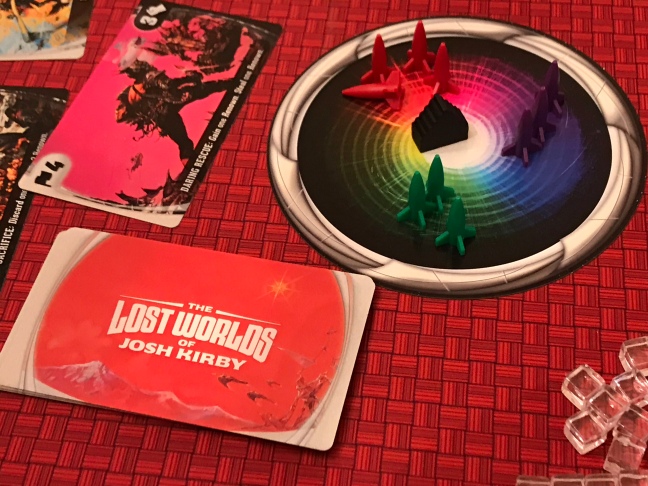 The art in The Lost Worlds of Josh Kirby is absolutely stunning — it’s worth checking out the project just to see the sweeping vistas and classic Sci-Fi artwork. You will see some classic sci-fi tropes (robots with lasers for eyes, strange alien spaceships landing on unfamiliar worlds), and of course, every card is literally bursting at the seams with a panoply of colors and scenes. For anyone who loves classic, John Carter of Mars style art, this is a must see. 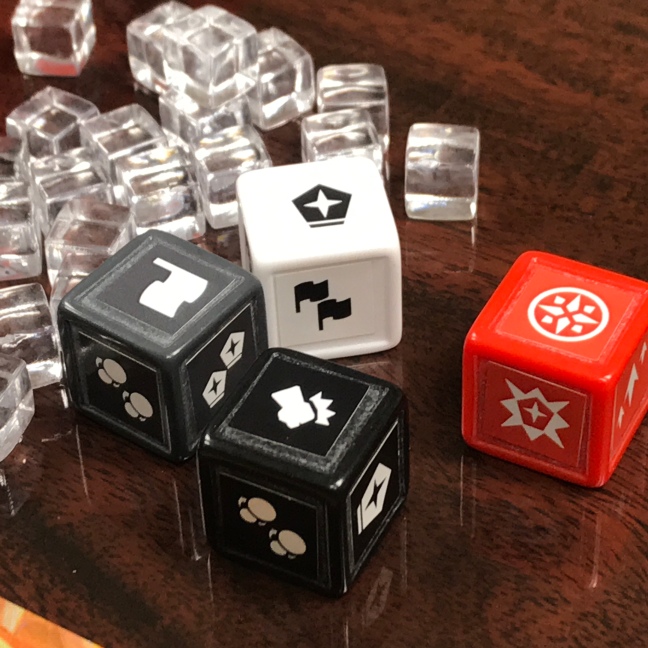 Back to the production of the game. Even though the bits are not final, what we were given is very pleasing to the eye. Buck Rodgers style soft curved space ships are provided to each player in five different bright colors. The project promises Dreadnaught standees and bits to represent each player’s Champions. Plus, there should be chunky dice and cubes for the renown. It is still early, so you should watch the campaign for upgrades as it progresses, but it looks like a solid production.

Kickstarter previews are always tough, since the rules are sometimes in flux, games can still be tweaked in development and as the kickstarter backers dive into the rule books, and of course, we are not privy to everything that will come out in the campaign. 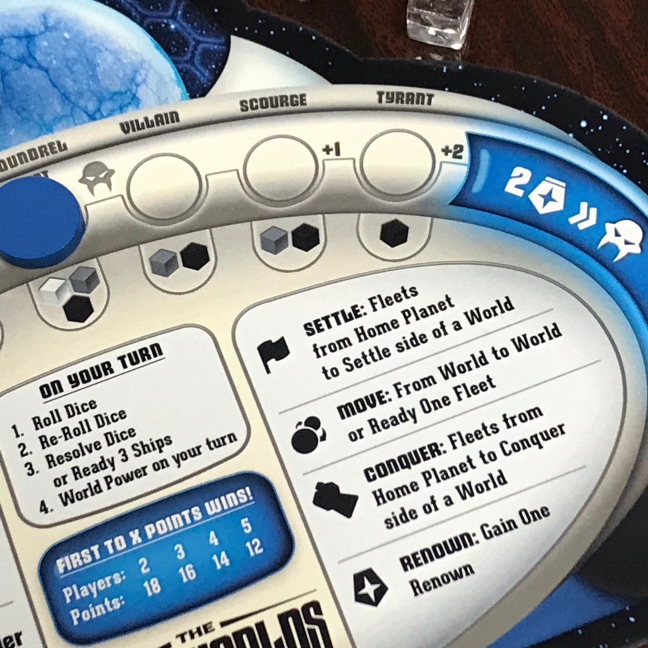 First, let’s talk about what the game is. Even the first play of the game will reveal that this is a very light space themed dice and light-engine-building game with a just a little bit of player interaction. The interaction comes in the form of the typical euro “I’ll take what you want” action, plus there are some interactive powers on the various world cards. But if you are looking for a tremendously deep 4X game, that is not the reason to look at this project. 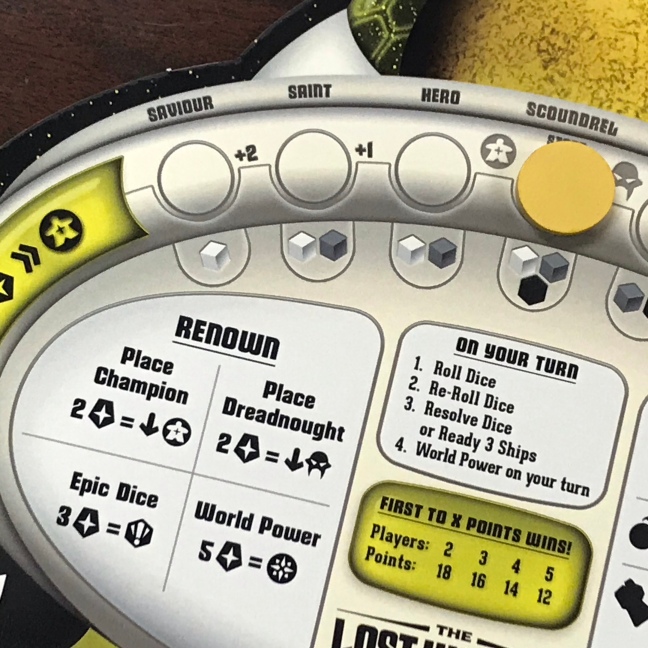 If you like quick playing, easy to teach games with amazing retro 50s Have Spacesuit, Will Travel style art, then The Lost Worlds of Josh Kirby should be right up your alley. Set up was a breeze, and each turn was very short and action packed. The ability to roll one or all of your dice, depending on where you are on the morality track, is not a heavy decision but does influence a bit which way players will choose when deciding whether to conquer or settle a world. (Although to be fair, in our plays, some of the players chose for thematic reasons, just based on whether they want to be a tyrant or savior.) I have not played at two players yet, so I cannot comment on whether that will work (my wife has been pretty busy with school work) but it played equally breezy at three and four players.

But what is intriguing about the project, aside from the gorgeous art, is the promise of a legacy style campaign. The gang at BARD Games calls it “space opera” mode, and it is for players that understand the base game and want a campaign style challenge. Players will play several games back-to-back, altering the large Galactic map, gaining additional powers, and score the most points on the campaign point chart. You would not think that a legacy or campaign game fits well with short, breezy games like Josh Kirby, but our plays of Space Base and Zombie Kidz have shown us that — at least for us — shorter games that can be played multiple times in one night or over the course of the weekend make the perfect legacy or campaign game in our house.

But back to the base game, the way most people will play it. This is not a deep game, but if you enjoy filler+ games that can be easily taught to your game group and a game or two knocked out while waiting to set up Cthulu: Death May Die, we suggest you check out The Lost Worlds of Josh Kirby while it is still up on Kickstater.

2 thoughts on “Kickstarter Preview: The Lost Worlds of Josh Kirby”