Trick taking games are very popular down here in Louisiana, with the most famous example being Bourre’. We’ve had a lot of fun in the Gumbo playing trick takers over the years, and we are always on the lookout for another good one.

The folks at Ninja Star Games were kind enough to send us a review copy of Yokai Septet recently. A team based trick taking game? Just the description brought back fond memories of playing too many games of Hearts and Spades at the LSU-E student union, so I was anxious to take a look.

If you like trick taking games, then let’s spice up your game night with a closer look at Yokai Septet!

Yokai Septet is a 2018 team-based trick taking game designed by yio and Muneyuki YoKouchi, and published in America by Ninja Star Games. It plays three to four players (although best with four) in about 30 minutes. Players take on the role of Onmyoji, guardians of the local villages, who must work together to protect their communities from the ravaging Yokai.

Who doesn’t like the simplicity of a good card game box? The Krewe de Gumbo loves the easy travel that comes with your basic card game cardboard container and Yokai Septet does not disappoint. 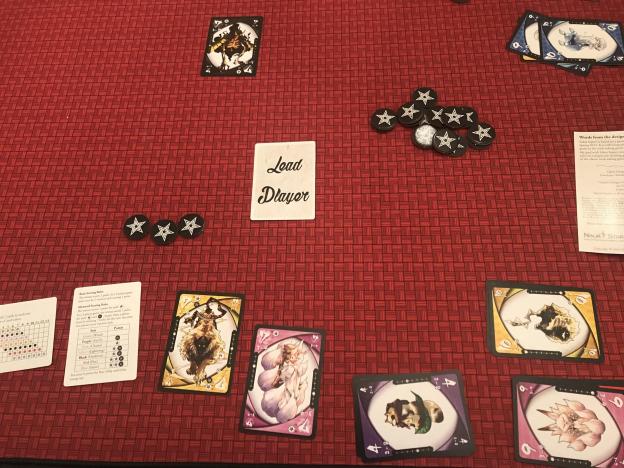 The game comes with forty-nine cards, with seven suits and seven denominations making up the collection. The card stock is perfect for the shuffling that is required. The art is pure and simple, with vibrant colors that stand out as you play. Each of the different suits is distinguished by a different color, and different values for the cards.

The game also comes with a little bit of cardboard in the form of “stars” used to denominate the winnings from each round. All of these bits and cards fit together with an English Rulebook in the tiny box. All in all, this is a solid production.

We have had no trouble introducing this game to veteran gamers and new gamers alike. Players’ goals are to score the most points, accomplished by capturing the high scoring “Boss Yokai” by winning tricks. Winning cards is fun, but you really have to concentrate on a strategy that gets you the Boss Yokai, not just regular cards. 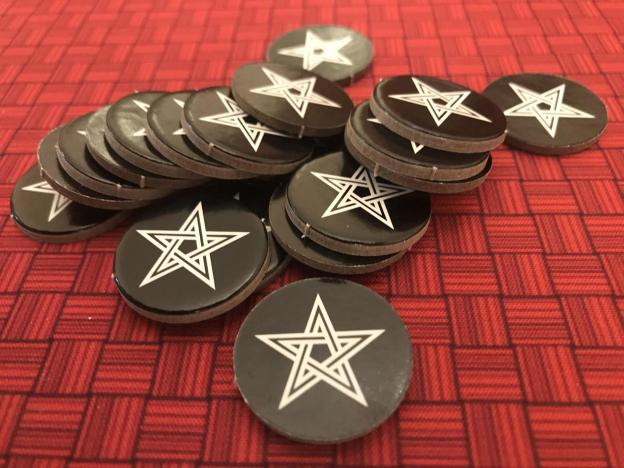 Each person in a four player game will be dealt 12 cars, leaving one card out of the deck as the face up “Trump Suit.” Then each partner will secretly pass three cards in their hand to the other player, hoping to improve their hand and maybe help their partner a bit too. This is done in secret, though, with no talking or communication allowed.

Then, each person takes a turn playing a card. Each team wants to win the tricks that contain any Boss Yokai (the 7s in the deck) so that they can score more points than the other players. Once four cards are played, the group examines what’s been played to determine the winner of that trick. The tiers are only three fold: (a) if someone played the A card, they automatically win that hand; (b) if anyone plays a Trump card, then the highest of that card that is played is the winner of the hand; and (c) if no one plays the “A” or a trump card, then the winner is the person with the highest card in the lead card suit played wins. 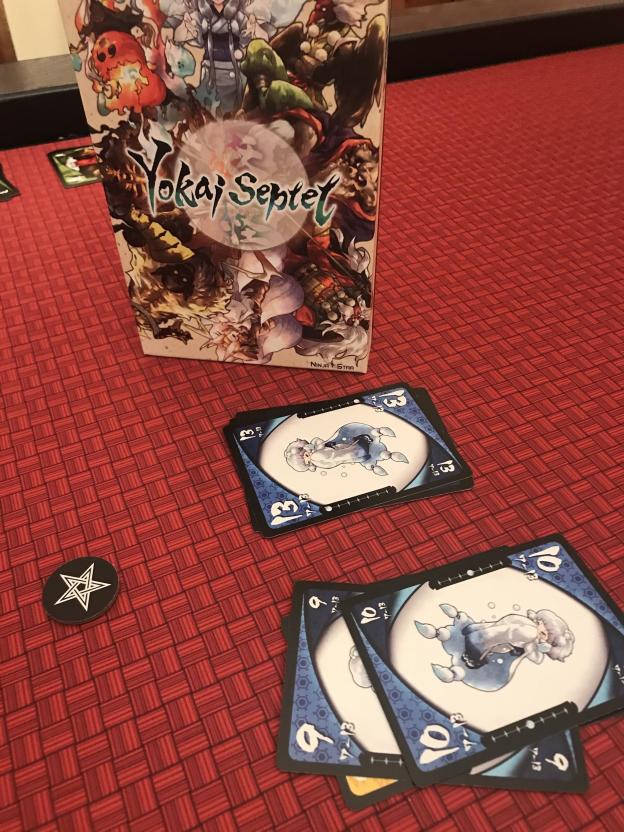 After all cards in all of the hands are played, the winning team for that round (or individual player, in the case of a three player game) is the one with four or more captured Boss Yokai (or three or more in a three player game). Points will be scored, the amount of which depends on if you are playing the basic or advanced rules, and the end of the game will trigger once one team scores a set number of points.

On the surface, Yokai Septet seemed like just another trick taking game. Play cards, grab tricks. Right? But as Hootie & The Blowfish sang, we quickly got to know a couple of things about this game’s deeper side. Once we got past the very first round of the very first game, we looked at each other with a slow nod, and said, “Oh, that’s how this is going down.”

The first mind bender is that each suit has a scoring “Boss Yokai”, the number seven card. But each suit is weighted differently. Take for example the green suit — it goes from 1 (known as the “A”) to 7 in value. (More about the “A” in a second.) That makes the Boss Yokai the strongest green card (except for that “A” card). Yet, the strongest suit is the Blue suit, which starts with the Boss Yokai and goes all the way up to a value of 13, meaning the Boss Yokai of Blue is actually the weakest card.

Let’s talk about that “A” card — it is the “super trump” card, meaning that it beats every other card in the deck, even though it is ostensibly the weakest card. That means that managing what you have in the hand versus what you think your opponents have versus what your partner has is so tricky yet so delicious. And it is especially fun if you can play several games back-to-back with the same group, as the meta game of working with your partner and reading the other player’s faces comes into play. Then for a twist, try switching partners just as you start to mind meld!

The more we play Yokai Septet, the more we appreciate the simple, and intuitive, yet deeply challenging facets of this game. If you and your game group are not into quick playing card games or cannot stand trick taking mechanics, then there is nothing in Yokai Septet that will likely change your mind, so best to stay away. But if you like your trick taking games to have a little quick decision and strategy, and you look forward to the elation (or disappointment) that comes with someone playing the exact right card at the exact right time, then you owe it to yourself to try out Yokai Septet.