Board Game Gumbo is pleased to present another new review from Sagan Ezell, fellow game group member.  Sagan is an omni-gamer who lives in Lafayette, Louisiana, and helps run the Southern Board Game Festival. Here are his thoughts on the game. You can reach him on Twitter @SaganEzell

Orcs are pillaging your land, a dragon rises up in the west, and only you and your fellow Guardians can defend the realm against the looming threat. You must search the land gathering resources, weapons, and spells, all to prepare for the coming onslaught. You must avoid taking on curses while on your journey to save the realm. And when this preparation is said and done, one of you will be named the Guardian Commander to lead the charge against the forces that threaten the land.

The game is Guardian’s Call, a 2-5 player bluffing game from James Hudson, published by Druid City Games.  The core gameplay loop sees players gathering cards from a shared marketplace, making secret exchanges with other players, and trying to amass the most victory points through the total trickeration of the other players. At a surface level, this game bears a heavy resemblance to Sheriff of Notthingham, as the central game mechanism is gathering up cards and passing them to other players as you potentially lie to them about what you just handed them. How does Guardian’s Call stack up though?

What is Guardian’s Call?

Players will begin the game by selecting a Guardian board. Each of the 5 boards has a matching miniature, and a certain card type associated with it. This brings in a slight slight slight amount of asymmetry into the game, as, for example, one Guardian might be more inclined to grab shields than spells, assuming all other factors are the same (which they won’t be). From this point, players will set up the market of cards on offer, the castle board to track villagers heading to safety, a facedown deck of treasure cards, and a random selection of 3 of the game’s 18 available quest cards for some bonus scoring. 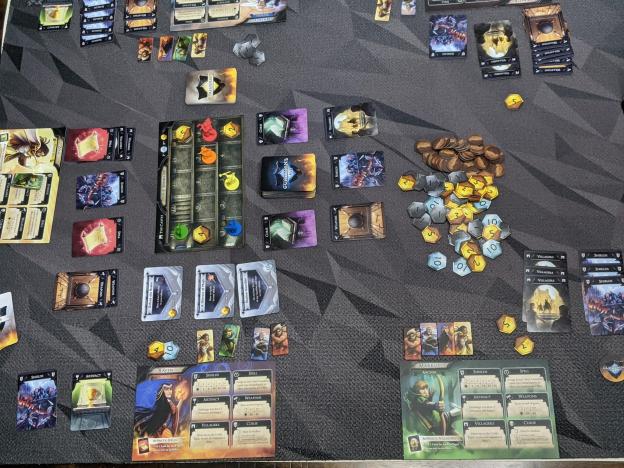 A player turn begins with the replenishment of the market cards. From here they can fill their hand up to its limit of 6 from either face up or face down market cards, spend gold on the market to directly send them to the tableau (or gain direct points for them), give up artifacts to gain treasure, and make offers to other players. This is fundamentally the entire game. Pick up a few cards, pass them to another player, lie about it if you want. This process repeats itself until the war card is drawn from the stack of market cards, signaling the end of the game. It’s a simple concept, and it plays in a tight 30 to 45 minutes with every size group I played with.

Now that the basic concept is out of the way, it’s time to bring in a little nuance. First, the offers. Players MUST make offers that have all the same card type. No sneaking in a little curse with a few good spells. If you offer 4 cards together, all 4 must match, even if they are curses. Second, the offers are tracked with a system of face up and face down tokens. You can only offer to a player whose token is face up, and when you make an offer, you turn their token face down. This system is an individual measure for each player. Meaning that in some order, everyone MUST offer to everyone else before cycling back through. By extension, it also means that the last offer each player makes is locked to someone specific, so you better plan a few rounds before what you might want to give that player. After an offer is made, the receiving player will declare the offer to be true or false. If they are correct, they add the cards to their tableau. If they are wrong, the offering player adds the cards. In either situation, the loser of the offer gets a coin as consolation.

Coins can also be gained from suffering the effects of a curse (which has other negative effects), or by that bit of asymmetry mentioned earlier. Each Guardian has a certain affinity, and they get a coin per card of their type they receive in an offer. If someone gives the Barbarian 5 weapon cards, he would get 5 coins as well. Coins are used to buy cards from the market directly into your tableau, or to remove curses from the market for straight up VPs.

The final bit of important detail here is the way cards function. All 5 major card classes will score or benefit players differently. Weapons are completely relative. Whoever has the most of them scores 20 VP, and second most gets half that. Shields are absolute. If you get 5, you get max points, period, even if other players also met that mark. Villagers also score relative to how many of them you have rescued, but they score both midgame and endgame, along with some other bonus points for going up the track fastest. Artifacts don’t score directly, but they can be traded in for pulls at the treasure deck, which does have direct scoring and other beneficial effects. Spells are wilds, and can be counted as a card type in any other stack. Finally, curses will remove cards from your tableau, which can be a really mean option, or a fairly tame one, depending on what’s getting discarded.

Okay so now you know HOW to play, but now you need to know what it’s LIKE to play. I’ll just come right out and say it here, to me it’s a little disappointing. I was really ready to like this game a lot, and it had a lot of interesting and promising ideas that I felt were just not fully realized.

Firstly, the art and graphic design is really appealing, so I see the cover and start getting hyped up. Next the rules are clean and simple, and I’m thinking, “This looks like Sheriff of Nottingham, but with player powers, and that’s awesome! You mean the cards have different effects and aren’t just scoring in different values? This is gonna be a great game!” And then I played and it just never came together for me. I played multiple games with each player count, and all of them just left the table feeling like there was a spark that was missing. 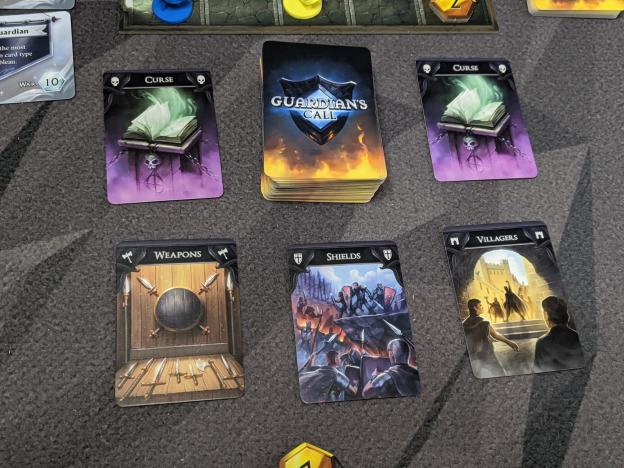 “The art and miniatures are really pretty good. The production value is really nice, the cards are high quality, the tokens are nice and thick, and there is a good insert in the box to organize the game!” Yet the theme is pasted on and makes no sense. If there is an invasion force coming, why are we lying to each other the whole time? Even if we want to compete for the Commander title, wouldn’t it just be easier to just gather resources for ourselves and compete that way? Why swap what we gather and lie about it? But I’m more about mechanisms than theme anyway, so no big deal, let’s move on.

“The heroes each having a special power seems really cool, I love asymmetric player powers!” Except these are all exactly the same power, just with a different color of card as the trigger. Probably more balanced, but way less interesting. I wish my Barbarian could have spent valuable weapon cards to rage and take bonus cards from people’s hands, or that the Priestess could have a discount on how many artifacts it takes to get a treasure. I was expecting cool differences, but each game, players just picked their favorite color instead of their favorite character. 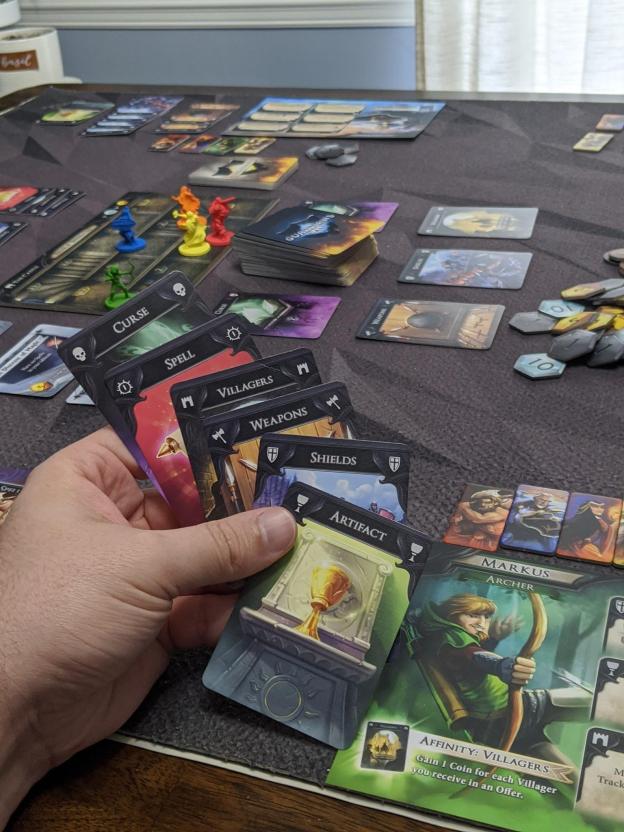 “Alright, but bluffing is always fun, and the fact that the cards do different things makes it even more interesting.” I did really enjoy that the cards all have such different ways of scoring. This design choice was probably the high point of the game for me. The issue with it is that the offer system itself was so restrictive. Having to offer all the same type of cards cuts out options for more elaborate bluffs (I suspect in the name of balanced and simple rules), and having to offer to each other player seems like the most fair option on the surface, but it locks in the last few turns each round in 4-5 player games, and basically removes the choice entirely from the lower player counts.

“Hey, but there are Treasures that give big bonus points and special powers, that’s cool! Also there are quests that can mix up the midgame and endgame scoring from game to game!” These are fun and really swingy. It’s interesting to me that the game up to this point seems to have been designed with a balance-first attitude in regards to its other cool ideas, but treasure cards range from 3 to 12 points in value and give a variety of quite strong powers (granted the high value ones give negative effects). Remember, the sum total of your efforts collecting weapons or shields for the whole game will give 20 points each if you win those categories. Two Artifact cards could net you 12 VP (or more depending on the effects of what you draw). With the type of game this is, I feel like these cards capture the spirit of bluffing in a game night the best. Something crazy might happen, somebody flips a card, and it’s a huge moment, and it’s fun!

To answer the question posed above, “What is Guardian’s Call like?” I can only come up with one answer. It’s like when you go to see a movie adaptation of a book you really love, and the trailers made it look awesome, but when you put it all together it’s like a completely different team filmed each scene. Each individual component of the game could have been brilliant, but it ended up just being serviceable. Perhaps my expectations were off going into this, and I was looking for something in it that just wasn’t there. Of all the people I played the game with, there were a handful who really really enjoyed it, and few who really disliked it, and the overwhelming majority who said, “yeah that was alright.” Don’t get me wrong, I think the game is fine, but it just left me wondering what could have been. Everything was in place for this one to really make a mark, but it ended up landing just off the mark.

Guardian’s Call at a Glance:

If you really love light bluffing games, this one might be worth checking out for a few plays, but repeat playthroughs of it left me wishing that it had just a bit more in the way of variety as a whole. The barely asymmetric characters and confining nature of its most core system left every play at every player count nearly indistinguishable from one another, and while a lot of its ideas seem promising and exciting, the whole package just feels a bit empty. If you want a fun time of laughter and ridiculous bluffs, it might be better to just grab yourself a copy of Sheriff of Nottingham. 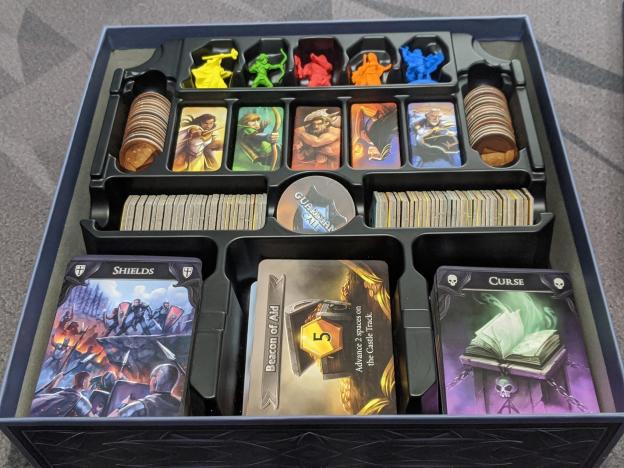