Hey board gamers, BJ from Board Game Gumbo here, back with more Louisiana flavor and tales of board gaming down on the bayou from the Krewe de Gumbo.

Since the outbreak, almost all of our gaming has been online. We’ve been able to dive back into some of our old favorites with friends around the country, and even a few brand new games and new-to-me games with the family. Hit us up on Twitter or Facebook (@boardgamegumbo) with your thoughts if you have played any of these games.

Hey, that’s enough blather. Let’s get right down to the Roux!

Lords of the Lyric

First up, let’s talk about a game that has been getting a lot of good buzz recently. Board Game Brothas has been fulfilling its Kickstarter for Rap Godz this year, a light hand management and set collection game with an interesting theme. Ditch the usual trading-in-the-Mediterranean or dudes-on-a-fantasy-map, this is all about street cred and showing off mad skilz as a rapper.

Players play as up and coming rappers from an assigned “hometown”, each with special skills. They will play through three ages (albums) trying to build up a story about their rapper to score points. The rapper with the most records (VPs) at the end of the game wins!

Or so we thought. Rap Godz is ostensibly about scoring the most points, by collecting and playing cards that match the goals of your character or the randomized goals from each game. The mechanics are dead simple: draw a card (or spend cards to grab a powerful card from the market) and play a card. 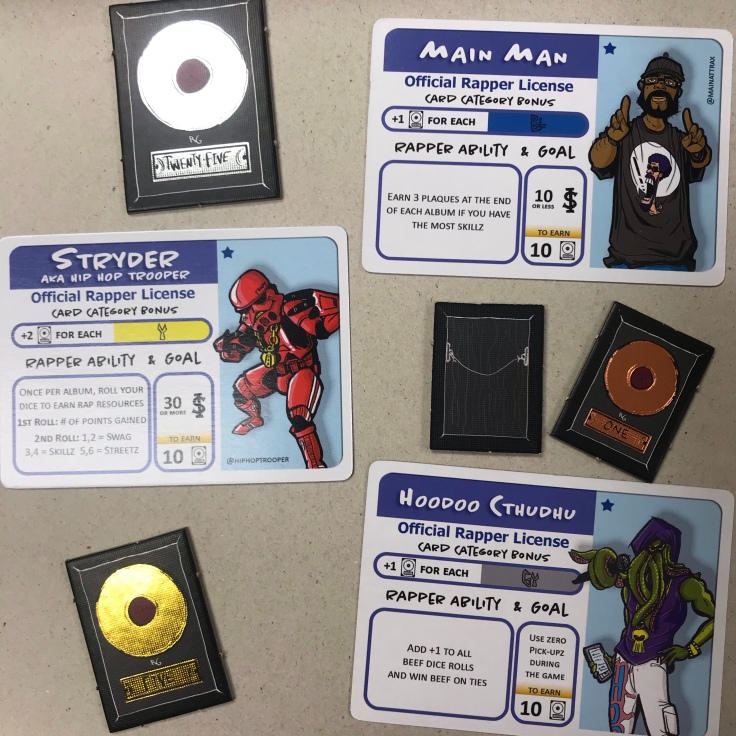 But the beauty of this game can be in how you play the cards. Each card has funky artwork depicting the life, times and troubles of climbing your way to the top of the charts. Sometimes it is fun grabbing cards from the market not just because they are good for scoring in your tableau, but because it just makes sense for your character to do so.

It was a design philosophy that we loved in Call To Adventure but that fell flat in Legends of the Western Frontier. For some reason, Rap Godz works well with this, and I think it has a lot to do with the care that Omar Akil and his brother Hamu Dennis put into naming and illustrating the cards. Sure, we tried to win, but I know I was always on the look out for something fun for my character to do, and I shied away from cards that I did not think fit what the story of my rapper was.

Couple of minor quibbles — the board is beautiful but very busy on the edges, and when you add the playing cards, it gets even busier. One more round of graphic design might’ve helped — say perhaps putting a nice border around the cards to make them stand out a bit more. Also, the game itself looks like it is much more complicated than it really is. In essence, this is a very light, family friendly game. But both of those are tiny complaints, and should not stop you from enjoying the game.

We own the Kickstarter edition, but I am not sure what that provides in terms of extra goodies or bling. The production was top notch; Rap Godz will certainly be one you will want to keep to show off on your shelf. I can’t wait to play my physical copy, but kudos to the designers for making Rap Godz available on Tabletopia for everyone to enjoy during the COVID-19 crisis.

ROUX DAT SAYS: Geaux in realizing that this game is a closer cousin to Ticket To Ride in weight than a game like Coimbra. That way you will admire the artwork, laugh at the choices your friends make, and enjoy the whole experience that much more. I could easily see this coming out at FLGS game nights or family friendly get togethers as I think you could teach anyone to play. Rap Godz is the perfect combo of an interesting new theme, intuitive and easy-to-teach gameplay, and random goals with just a hint of story building thrown in for good measure. Thumbs up for a great first game from Board Game Brothas, and looking forward to their upcoming releases. 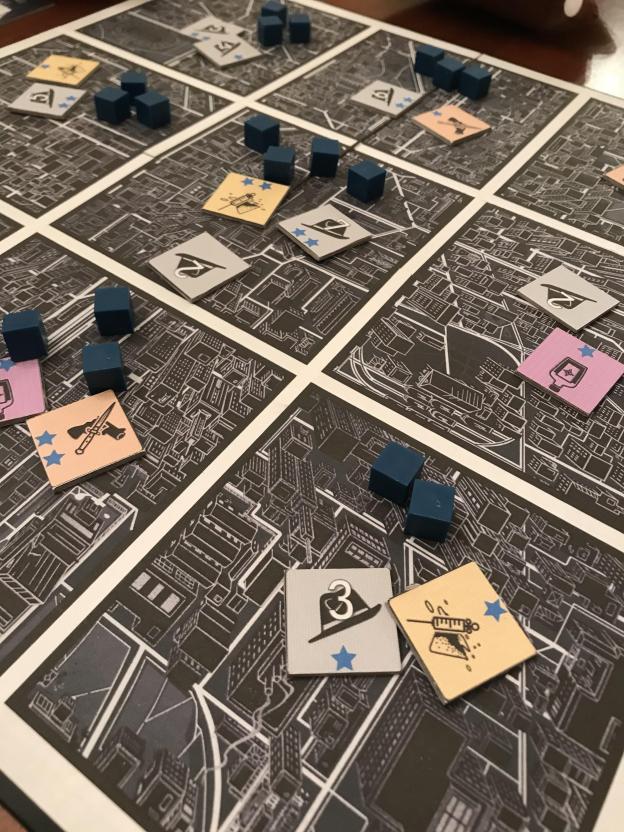 Don’t Be A Wiseguy, Wiseguy

I was lucky enough to meet and game with Jon Vallerand, a designer out of the French speaking part of Canada, way back at Dice Tower 2017. We’ve stayed in touch, and he sent me a copy of his new project coming out on Kickstarter next month called With A Smile and a Gun. 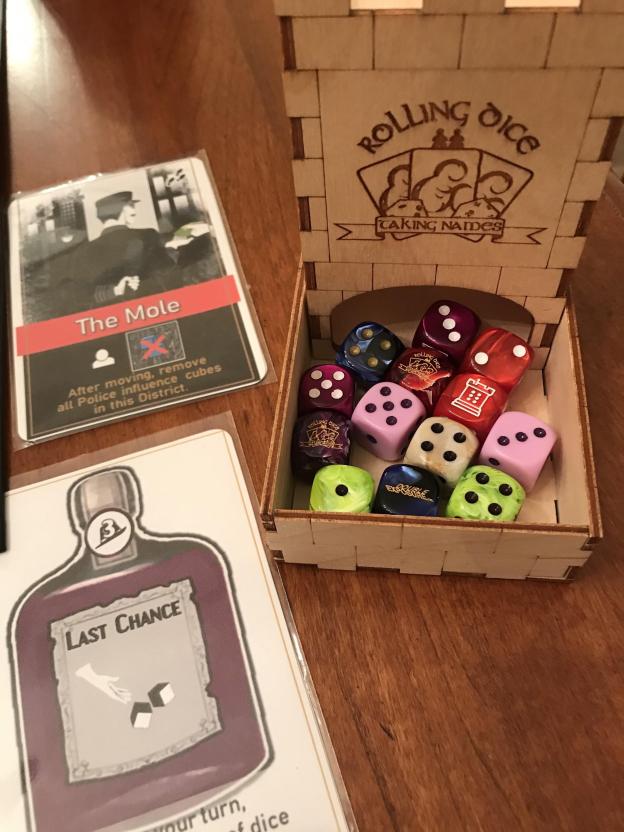 It is a tense two player area majority game but with a cool theme of two gangsters trying to dominate the mean streets of the big city, while the police try to win back control at the same time. Players will roll a gigantic pile of dice, then use those dice to take actions on a three by three grid of city streets.

There are a number of unique twists from other types of dice selection, area majority games, that I really enjoyed. First, it has that “watch out for the leftover dice” mechanic, as Jon provides you with an uneven number to roll. Whatever does not get chosen is going to be used by the police to wreak havoc with the player’s plans. But plan accordingly, as you can see what die will probably be chosen as the field narrows.

Second, he added in one additional ghost player, called “the shadow”, which I pretended to be some kind of mastermind behind the whole sinister gangster goings-ons, and the shadow has actions that take place and really change what happens.

Third, the players themselves have to contend with special actions that change each game, and the varied combos of the Shadow and players powers makes each game unique. Finally, the actions by the players themselves come from two choices — one die you choose determines movement around the board (and consequently, the three city blocks you will influence) and the second determines the special action you can take (like moving influence around or adding police tokens). 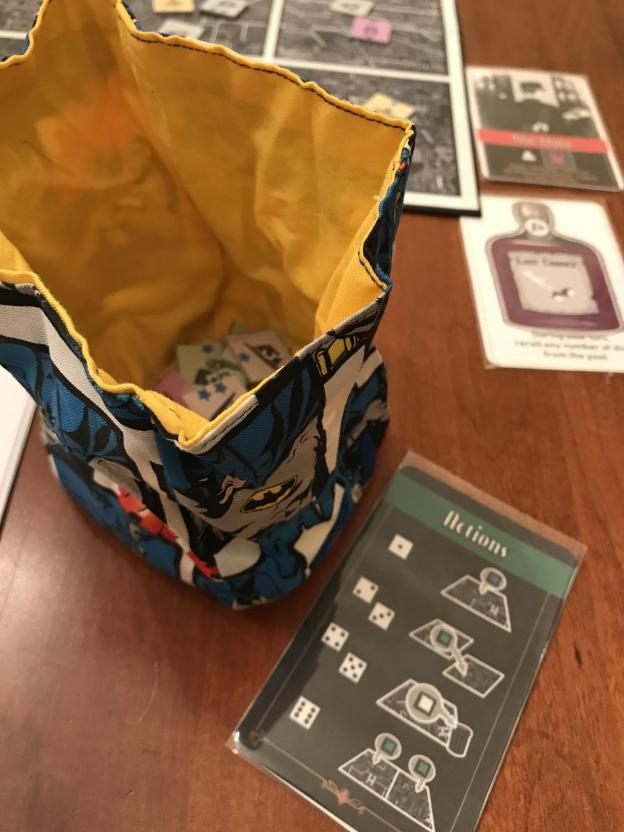 I cannot say much about the production itself, as I was playing on a well made prototype, so we will have to see how the Kickstarter presents the game. Also, if you are not an area majority fan, I’m not sure that the game presents anything that would sway you toward trying it out. But, the gameplay is very easy to pick up, and the actions are thematically spot on.

ROUX DAT SAYS: There have been so many good two player euro games published lately! We’ve really enjoyed Imhotel: The Duel, Watergate, and others. With A Smile And A Gun has the theme, delicious decisions and relatively short time play that should make it stand out in a crowd. If you like games that look like abstracts but have a great thematic overlay that makes sense, you should check out With A Smile And A Gun when it hits Kickstarter next month.

Ticket To Ride has long been a favorite of our scout dad game nights. The hallmark of those game nights are games that have simple rule sets, allow us to still chat and visit while playing, but have enough strategy to satisfy all of us. 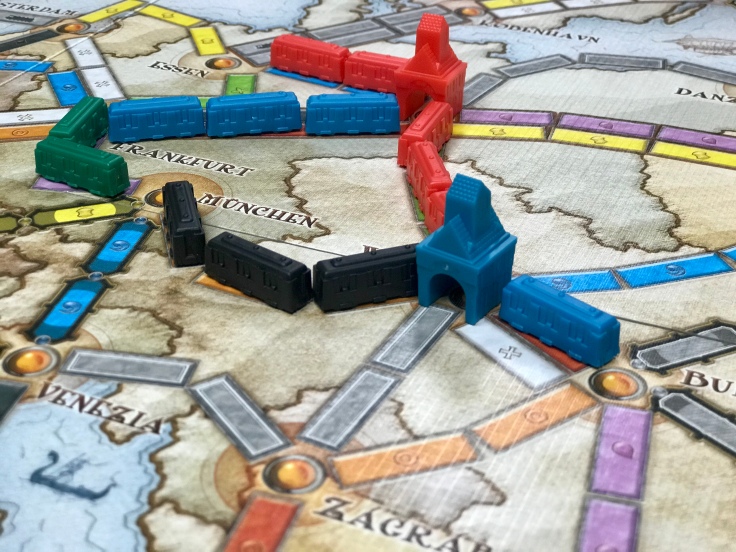 I’ve only taught the base game to them, and we have not gotten together since the whole Pandemic thing started. But, we were able to visit with one of the scout dads for a nice little couple’s night of gaming. There were no hugs or handshakes allowed, though! Gotta maintain our distancing.

I set up the game using the beautiful trains and upgraded tokens from my 10th Anniversary Edition of Ticket To Ride, instead of the usual Europe trains. I threw in the train stations from Europe, of course, taught the three new rules (tunnels, ferries, and stations), and away we went.

I had only ever played the Europe map with my wife at a two player count, so playing at four was definitely a unique experience. The board got crowded, and not just because the 10th Anniversary trains are not really suitable for the much smaller map presented in the Europe box.

ROUX DAT SAYS: This was my third play of the Europe map, and the more I play it, the more I see why it is a favorite of Ticket To Ride enthusiasts. The addition of the train stations, and the changes to the destination tickets, makes for a more balanced game. Our scores for the first three players were within three points of each other!

So, that’s it for our post-game quarterbacking session. Roux Dat will be back with more commentary and reviews about the games we are playing. Is there a game that you would like to suggest for the next Roux Dat? Send me a tweet @boardgamegumbo and let’s chat about it.