Hey, board gamers, BJ from Board Game Gumbo here. For the first time since 2015, there was no trip to Indy this year for GEN CON for the Gumbo Krewe. But board gamers are not going to be denied their chance to play board games and talk about board games, too.

Thanks to the folks at Gen Con, I was able to participate in a bit of the Gen Con Online experience. Plus, Eric Buscemi from The Cardboard Hoard & Punchboard Media set up a great Media Mixer for us at the end of Gen Con, (with big help from Chris Whitpan and Ken Grazier). Here’s a quick run down on some of the publishers I visited and what they have coming out for 2020 and beyond! (This is Part 1 of a multi-part series.) 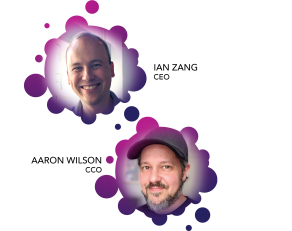 Ian Zang (Breaking Into Board Games podcast) and Aaron Wilson (Sovereign Skies) , two successful designers in their own right, have started up a new company focused on accessible, easy to learn and play games. The company philosophy at Gravitation Games is publishing games that “pull you in”, and their first effort, Please Fix The Teleporter seems to fit the bill.

Billed as a “speed puzzle” game that can be taught in a minute, up to four players have the task of unscrambling cardboard tiles to match a deck of cards with the same images. Imagine that scene at the start of SpongeBob SquarePants whenever he “scrambles” himself into different shapes, or a scary mishap in any sci-fi movie where the teleporter scrambles the users. That’s the elevator pitch for this game. 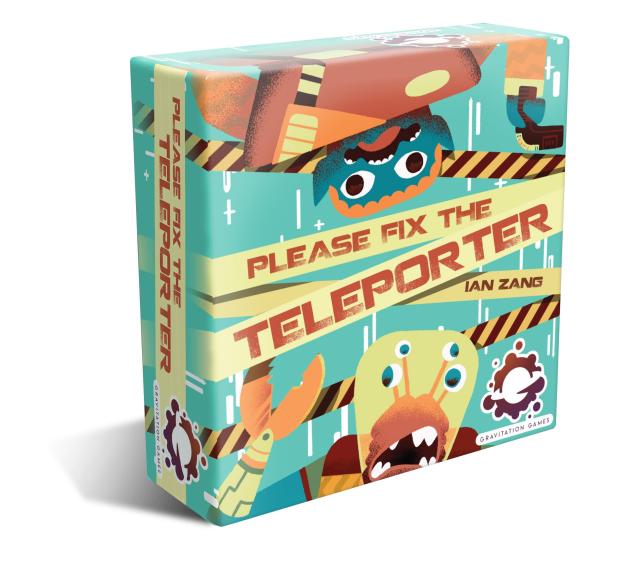 A game like this has to have unique, memorable art, and the team at Gravitation pulled it off. The art is by Nick Nazzaro, from Lay Waste Games and artist for Dragoon. The deck has twenty four cards, each with unique illustrations that the players will have to match by quickly moving their four tiles into position. Each player has a unique color, but every set of four tiles shows the same two images: Our hero, Capt Gurf on one side, and the alien Emperor Corlax on the other.

Games play quickly, as it is the first to match five scrambles. Each puzzle takes maybe 7-15 seconds to finish, so players can jump in and jump out at will. With a small footprint and a small box, and easy to teach rules, this looks like a great choice to start the game night off or carry around the next time you are at a convention. Look for Please Fix The Teleporter to hit retail this fall.

The Fleeples a/k/a Matt Riddle and Ben Pinchback have their own imprint now, called appropriately, Motor City Gameworks. Matt showed off the latest iteration of Three Sisters, another deliciously crunchy roll and write. Brandt Sanderson taught me and Alex Goldsmith Fleet The Dice Game last year, and FTD Game was as thinky and juicy as expected. That play gives me high hopes for Three Sisters, as it seems another entry in Motor City Gameworks’ effort to make randowriters as close to a board game experience as possible. (Sorry, can’t show off any artwork or specific mechanics yet). 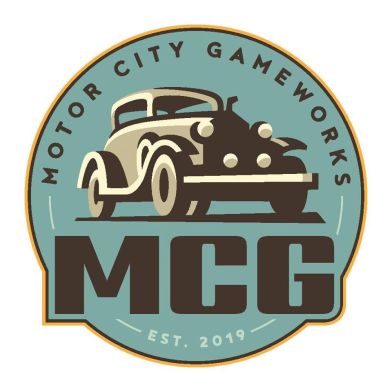 Three Sisters is a spiritual follow up to Fleet The Dice Game. Matt & Ben plan to publish a game “every now and then”, and this looks to be the next push. It’s a step past the normal roll and write, and has the familiar “two sheets” set up. This time, the game is themed to a backyard garden, the typical beautiful rural garden area (which apparently closely resembles Ben’s own backyard!)

The inspiration for the game is the “three sisters” planting method, where farmers use corn, beans, and gourds symbiotically to help each planting grow better. Each player will get two sheets to mark off as they use the dice rolls, and there is apparently an extra board in the middle, a shared board between the players that has a rondel mechanic. Think Yspahan or Grand Austria Hotel for the inspiration for the mechanic.

Game play is relatively simple. Players will roll a wheelbarrow-sized chunk of dice, and group the similar numbers together on the rondel. Then, players will take turns choosing dice. The key to the game is that the value of the die not only groups it but also tells you where it goes on the sheets. Where you place is what gives you your available actions during the round.

When you pull dice, you will “work” that area of the garden as a free action, and then get a plant or the ability to water in the zone that you took, which is the main action of the game. The bottom sheet has six zones (representing the dice numbers), and you will either plant or water in the zone represented by your dice. You can plant two seeds, or water the zone. If you choose to water instead, everything you planted there goes up one box. Plus, it is thematic, as the plants work together if you plant and water them strategically. As for scoring, corn and beans are worth points to you, and pumpkins will get you goods to give you bonuses during the games.

The game is all about timing — you want to get as many seeds out as you can, but you also have to get them to the full height to score points, so balancing seeds versus watering is the trick. Plus, there’s the signature Fleeples “chaining actions all over the sheets” vibe. Perennials are another bonus track at the bottom of your garden, which gives you tons of immediate bonuses that you earn to use somewhere else on the sheet. The Shed is where you use the tools you collected for special powers in the game. The Apiary is where you can raise your bees, and if you work on them during the game, the honey and wax can generate goods (which translates to more free actions, yay!). Fruit trees are present, too, and they can give you goods or points or other ways to help you during the game.

Matt said that players will want to try different strategies each game, especially in using the shed. What you do in the shed differently each game will give you a radically different way of comboing up your sheet for points and goods. And don’t worry about forgetting your plan, the designers have helpfully included a “JOURNAL”, an additional white space to remind you to take the bonuses you will need when the rain mechanic affects the board three times each game.

Three Sisters is nearing final art production, and is expected to hit Kickstarter in early 2021. By then, the Fleeples will have most of the back end stuff ready so printing and delivering should be pretty timely, perhaps as early as next summer.

After listening to the teach, and eyeing the player sheets, this looks like another great entry in their heavy hitting randowriters, and a worthy successor to Fleet The Dice Game. Matt expects the final version to play in about 15 minutes per player, and they are building out a solo mode, too.

Omari Akil and Hamu Dennis from Board Game Brothas are the team that brought Rap Godz to the board gaming world, and they are back — this time diving into the world of street ball. 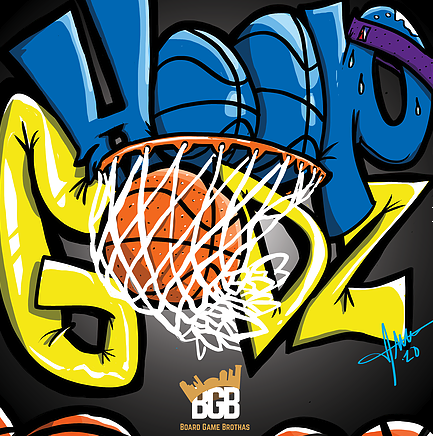 Hoop Godz is a two player game coming to Kickstarter this fall. Each player drafts three “ballers”, each with special skills and size, and first team to score seven points wins! 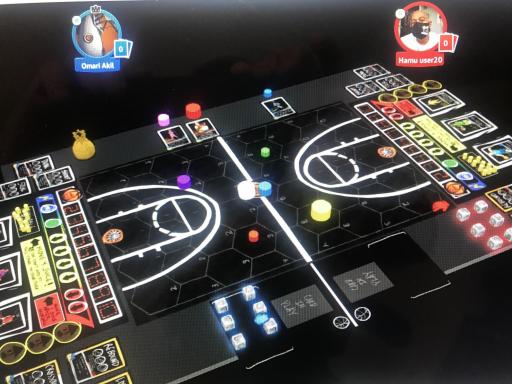 The game moves quickly, and can be played in about 30-45 minutes. You have to really manage your energy, so you can start fast breaks, throw down some dunks, or play stellar defense to stop your team from being “posterized”. 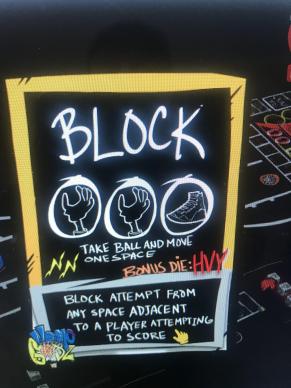 Hoop Godz is a cool combination of strategy and resource management. Plus, the artwork literally popped off of the Tabletopia screen. The court practically lights up, like the pregame introductions of any modern basketball arena. Note that these pictures are from Tabletopia, as an early build, so most of the art and components will be upgraded in the Kickstarter project.

Omari gave us a quick overview of the game play. The red light / green light area is your juice energy meter. When you take an action, it fills it up the meter, and then the energy cubes drop down into a holding area. Players who run out of energy will have to take a “short rest” to get more juice. Therein lies the strategy. Players will have to know the right time to rest, and the right time to spend everything on a flashy move to dunk or try to block an attempt. 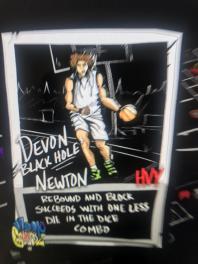 Each player will decide where to go and what to do based on two small decks, the action cards in white (things like “shoot” or “dunk”) and the reaction cards in yellow (things like “lock down”). I really enjoyed the mix of strategy (playing cards and moving pieces), economy (managing your “juice”), and the real-time element of dice rolling to resolve successes. Rolling dice against your opponent to do the signature moves in your deck, like trying to block a dunk or lockdown a sweet cross-over, gives it an up tempo feel much like the real game, but in quick little bursts, again just like the real game. Look out for Hoop Godz this fall.