Hey, board gamers, BJ from Board Game Gumbo here. For the first time since 2015, there was no trip to Indy this year for GEN CON for the Gumbo Krewe. But board gamers are not going to be denied their chance to play board games and talk about board games, too.

Thanks to the folks at Gen Con, I was able to participate in a bit of the Gen Con Online experience. Plus, Eric Buscemi from The Cardboard Hoard & Punchboard Media set up a great Media Mixer for us at the end of Gen Con, (with big help from Chris Whitpan and Ken Grazier). Here is PART TWO of our quick run down on some of the publishers we visited and what they have coming out for 2020 and beyond! Click here for PART ONE (Gravitation Games, Motor City Gameworks, Board Game Brothas) and here for PART TWO (The OP, Inside Up Games, Thunderworks Games, & Inkwell Games).

One of the genres that I always scope out at GEN CON is worker placement games. I am always on the look out for designers who can do something different with this familiar mechanic.  The folks at Talon Strikes Studios showed off one of their upcoming releases, heading to Kickstarter soon, called Shadow Network. 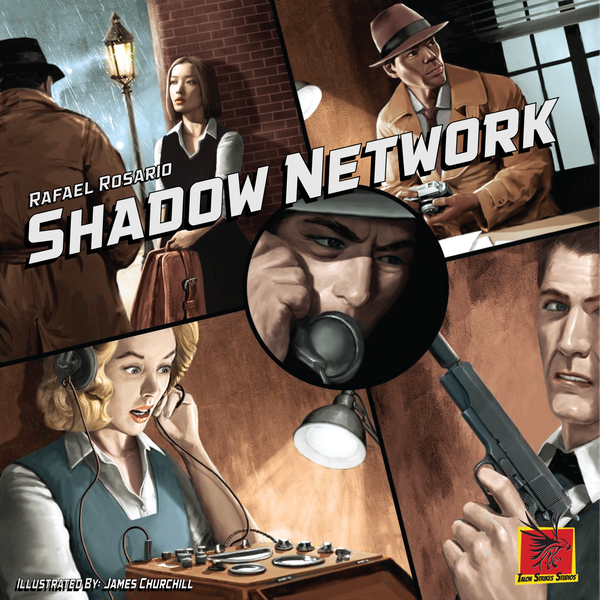 With that name, you are probably expecting some type of spy theme, and of course, you would be correct. Players are rival agency heads in Cold War era Europe, trying to connect information gleaned from their various “handlers” and “operatives” all over a gorgeously detailed map.  Jason Washburn from Talon Strikes showed off the latest version of the game on Tabletop Simulator. 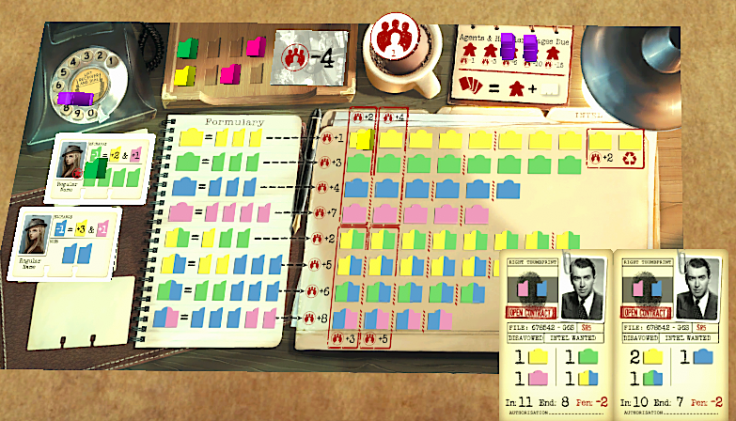 Talon Strikes is known for their very stylistic graphic design, and Shadow Network is certainly no exception.  Artist James Churchill really dove in deep with the 60s spy era theming: you’ll see rotary phones on your player board, rolodex entries for the handlers, a coffee cup to handle all of your influence, and gorgeous wooden pieces representing the briefcases of information your agents will recover.

We did not get to play a whole game yet, but wow, once we got past the initial round, this game really sung to me. I loved how the designer put two halves of a game together — first, putting workers out to gather resources, new agents, new contracts to complete and new handlers to help you process the intel, and then second, processing that intel into victory points — in a seamless way that leads to no downtime at all for any gamers. 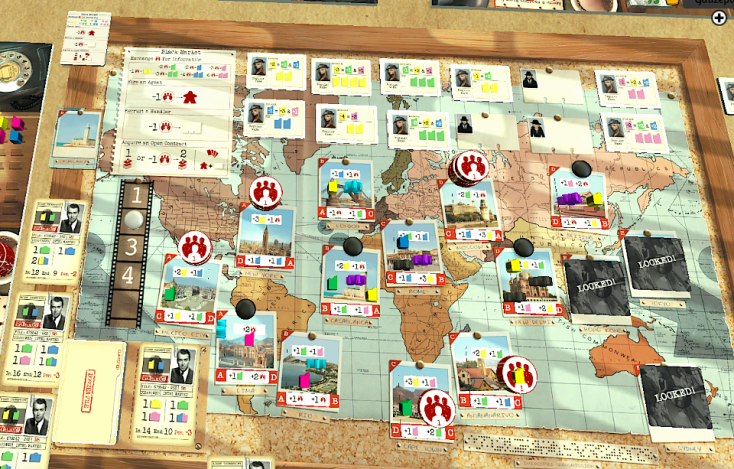 The first half of your turn is taken while everyone waits, but that’s just putting down a worker and gathering up stuff. Once that is complete, play passes to the next person, but you can still work on the second half of your turn, taking the resources you have and transmuting them into better resources to match your scoring goals on the contract cards. By the time you finish that (especially in a three player game, like we played) it will be time for your turn again.

I can’t wait to play again.  Shadow Network is a great blend of euro mechanics with strong theming and is one to watch on Kickstarter when it hits.

Even though we did not make Gen Con in person, our Media Mixer gave us the opportunity to visit with publishers from all over the world. Filip Glowacz, co-owner of Board & Dice from Poland, talked about their very big line up for 2020-2021. Board & Dice has been known for publishing deep and thinky euro games and have had a number of well regarded hits lately, including Teotihuacan: City of Gods and Sierra West. Board & Dice are back with a number of new euro games: 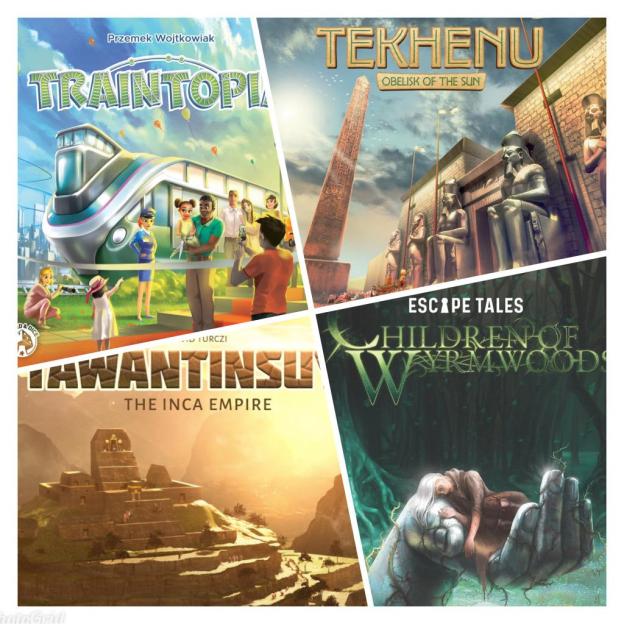 — Tawantinsuyu: The Inca Empire, a solo design by David Turczi.

Plus, they have a new entry in their popular Escape Tales series — Escape Tales: Children of Wyrmword — as well as a game getting a lot of buzz right now, Traintopia.

Since you, dear reader, already probably know (or can find) all the info you want about the above, we instead spent the majority of our visit getting a sneak peek at some things in the works with Board & Dice. Alas, we cannot talk about them yet. We’ll just say that we are very excited to see the release when it happens. Our thanks to Filip for an excellent presentation.

Callan Davis was kind enough to stop in all the way from Down Under with Half-Monster Games. Callan was showing off a game that just finished a successful Kickstarter funding project called Animal World War, designed by Jack Ford Morgan. I had a little time for Callan to show me the basics of the game and play the first couple of turns on TTS. 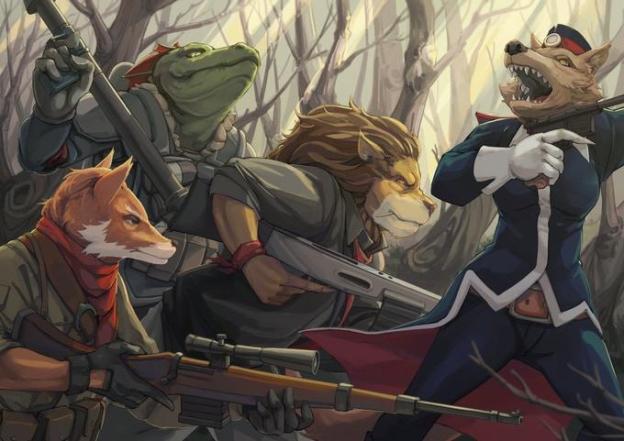 In Animal World War, players are thrust into a very rich and detailed post-apocalyptic world at war. The animals are now the dominant species on the planet, and it is a battle royale for dominance between those who eat animals and those who don’t.

Players will pick sides, then draft military units each stylized in the form of animals. The art style is a combination of the great euro post-WWII art with a modern sensibility that will probably be especially warm to those who are fans of the series, Band of Brothers.

My sons and I played tons of Battle Cry and Memoir ‘44 back about ten or fifteen years ago, and we enjoyed every bit of it. But, I am honestly not much of a wargamer beyond that, so there was some hesitation on my part. I should not have hesitated, because Animal World War really drew me in, especially with the unique-to-my-eyes combat system. Players will choose targets in a line of site, and then roll dice to see if the ‘bullet’ stays in the air and on target until it hits or crashes harmlessly into the turf. (Think a little of war mixed with the dice placement in Rallyman GT). If you miss, you actually damage the land, which can turn it into a defenseless “no man’s land” if it is hit too many times.

Again, I’m not a wargamer, but the artwork, theme and fresh combat system made me stand up and notice. I will definitely keep an eye out as they get closer to release.

Last, but not least, we stopped by the Formal Ferret booth to chat with Gil Hova. I was there with Alex Goldsmith from the Dukes of Dice, and we jumped at a chance to get a teach right from Gil for his new entry into the Networks series, The Rival Networks. 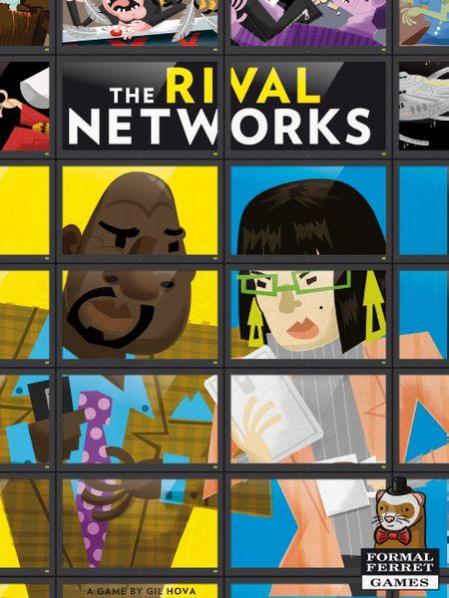 The Rival Networks is a two player, streamlined version of the original game. You and a friend play as rival executives at terrible television networks, with low rated, terrible shows already on the schedule. The premise will be familiar to those from the original: recruit better shows and stars, and try to set collect your way to scoring viewers and matching each season’s goals.

We really enjoyed our play, in fact, I found that I enjoyed this version even better than the original. Gil promises that games will only take about 30-45 minutes for two players, and that sounds right, as with the teach and first play, we were right around an hour of game time on Tabletopia. Looks like I’ve got my first purchase from GEN CON 2020 picked out.