One of the games we were supposed to feature at Southern Board Game Fest was a game from a board game publisher from right down the road in Houston. (For more inside information about the game, check out our interview of Woody and Adam from HutChu Games before their first trip to Essen last year to show the game off.)

With SoBo postponed until next fall, we’ll present some games here in the next few weeks that we would have talked about with you in person. Here’s krewe de Gumbo member, Kyle Libersat, with this review of Plunderbund from HutChu Games. 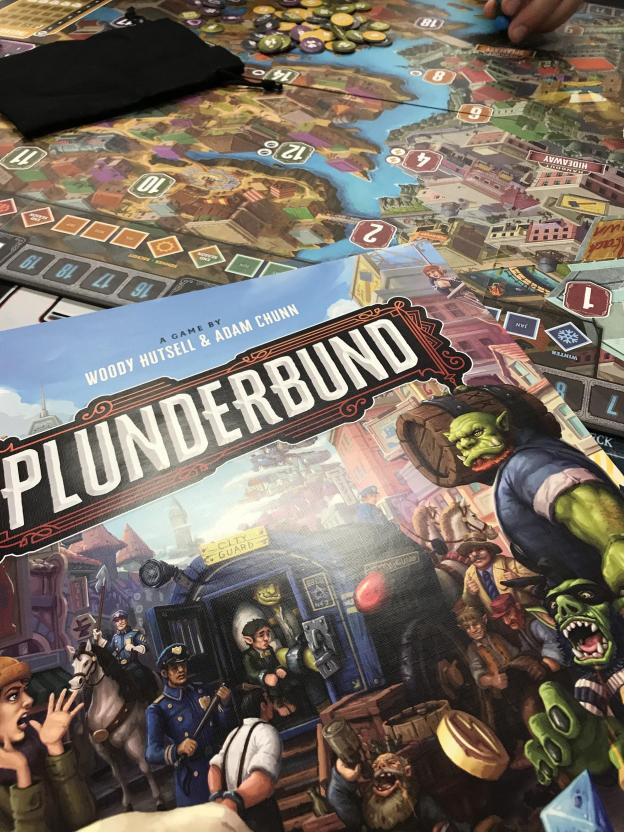 Plunderbund by HutChu Games is a 2-5 player deck building and area control board game themed around traditional fantasy tropes paired with early 19th century Italian mafia flair. The game brings together multiple game playing mechanics that layer more and more complexity as the game proceeds into a frenzy of activity to reflect the bustling mafia activity in the city as your “guilds” grow.

Each player starts with the same deck of cards that they use to take actions on their turn. The cards typically do one of two things: Put (or move) a player’s figures on the board for area control or move up one of four advancement tracks. The advancement tracks gain players benefits for crossing thresholds that allow them to do things like draw additional cards or get cheaper prices on deck manipulation. 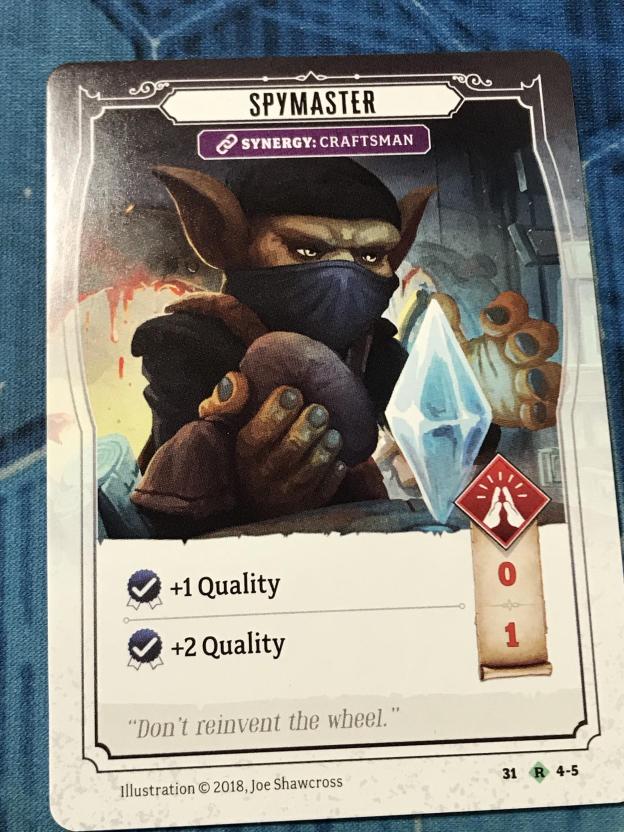 Deck manipulation with resource management is really where the players’ choices are on a turn-by-turn basis. That’s because instead of purchasing new cards for your deck, every time you take (most) actions, you must curry approval with the mob and add a “favor” card to your deck. Your favors get repaid when the cards get dealt back out, but they give you nothing in return! Players have the option of paying off the favors before they go in the deck, but it will cost them resources that they will desperately want later to claim victory points.

After 4 “months” (turns) the “season” (round) ends and players will extort and sell goods based on demand in exchange for victory points and they will also in-turn gain new, more powerful action cards to add to their deck. Four seasons makes a full year and end game scoring happens with a few additional score modifiers.

The game builds tension in spamming the board with “demand” coins that score points. Players watch the demand build up and then proceed to bully each other into position so they can claim those demand at the end of each round. The card play of the game is quick and turns are fast. 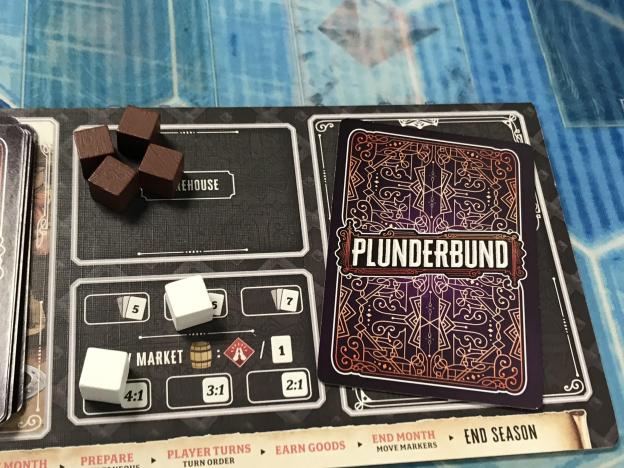 Most players just move up the respective tracks or plop a few meeples on the board to begin the process of claiming those sweet, sweet demand coins (victory points). They can spend resources to not take those poisonous “favor” cards, but early in the game it’s so expensive that it’s usually not worth it. Every “month” (round), the tension mounts as more demand is added to the board and more goods are added to players’ supply.

Late in the game, things are cheaper and players have more cards per turn, which means that actions get more frequent and favors will get paid off rather than shuffled in, which is important for end-game scoring. This game builds itself into a frenzy of activity!

This game isn’t really a deck builder like most others in the genre. The card play just sort of… happens. You just do the action on the card. Sure, sometimes there’s two or three (similar) choices to choose from, but it’s usually pretty obvious what you need to do. The cards stay mostly the same with only a few cards added in at the end of each season. The only real deck management available to the players is in preventing favor cards from being shuffled in. The favors are more annoying than exciting, and (mostly) unavoidable.

Since the decks all start equal, players stays mostly neck and neck on the competition tracks, except that one player who has the “extra” card for that track he/she picked up at the end of the season. The competition tracks push cubes up the charts in a bar graph of influence over the demand coins that plays out in claiming the coins at the end of each round. Unfortunately, it’s so difficult to predict which track you’ll be on top of that by the end of the round, it all felt kind of random.

Also, the game comes with a lot of fussy end of turn board and deck maintenance, meaning that every round your counting up how much of this and how much of that needs to be added to the board… then searching the board to find where it goes. In our experience, by the end of the game, this process was a bit more like reading Where’s Waldo while counting a jar full of pennies. It was a little exhausting. 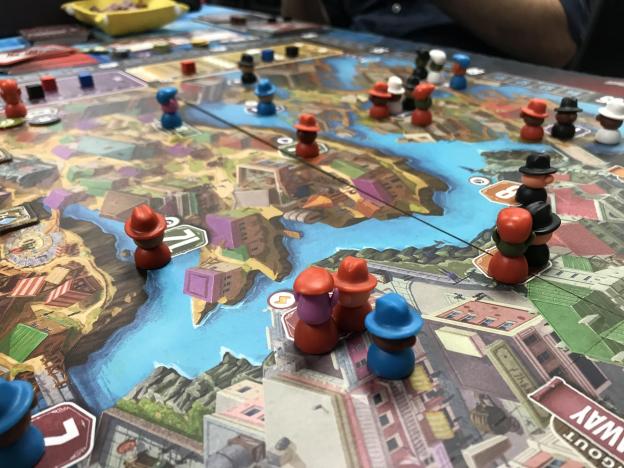 First and foremost, this game is very well produced, has great art and top-notch components. The gameplay is fairly straight-forward to understand, but seeing how to win is a little bit unperceivable, even after playing a few rounds. Most notably, the game is a lot of maintenance to play.

The designers were shooting for: “tension in economy and cards, area control with fluid movement, and an increasingly urban and kinetic landscape that becomes a pressure cooker by the end.” They certainly succeeded in tension in cards and economy by using timed mechanics to move up the tracks, which translates to tight races in play. They also succeeded in creating a pressure cooker, although maybe not exactly in the way they intended.

Players are constantly moving pieces, adding cards, pulling from blind bag, or littering the board with meeples and coins that make this game just a little too much drudgery for our group’s taste. With that said, if you enjoy a very tactile game with straightforward turns and complexity in jockeying for position, this is the game for you.

BJ from Board Game Gumbo:

Unfortunately, I only have one play of Plunderbund under my belt. I fully intended to get in a play or two at Southern Board Game Fest this past spring with the designers, to get as much of the feel and background of the game as I could. I love euros, and so I was intrigued by Plunderbund’s combination of deck building and economic simulation.

On the plus side, I love the theme. The idea is that these high fantasy creatures are not playing to the usual European stereotypes of lords and ladies, but instead it is a mixture of Al Capone meets Lord of the Rings. That’s different and a theme of which I am sure Tony Topper would approve! The artwork really pops.

I also enjoy games that feature multiple use cards, and Plunderbund has it in spades. the variance in strength of actions on the cards really makes for some tough decisions during the game. On the down side, the game was a bit fiddly during that first play. Kyle knew the game pretty well, and kept it moving along, but I definitely need another play or two to get the flow of the mechanics.