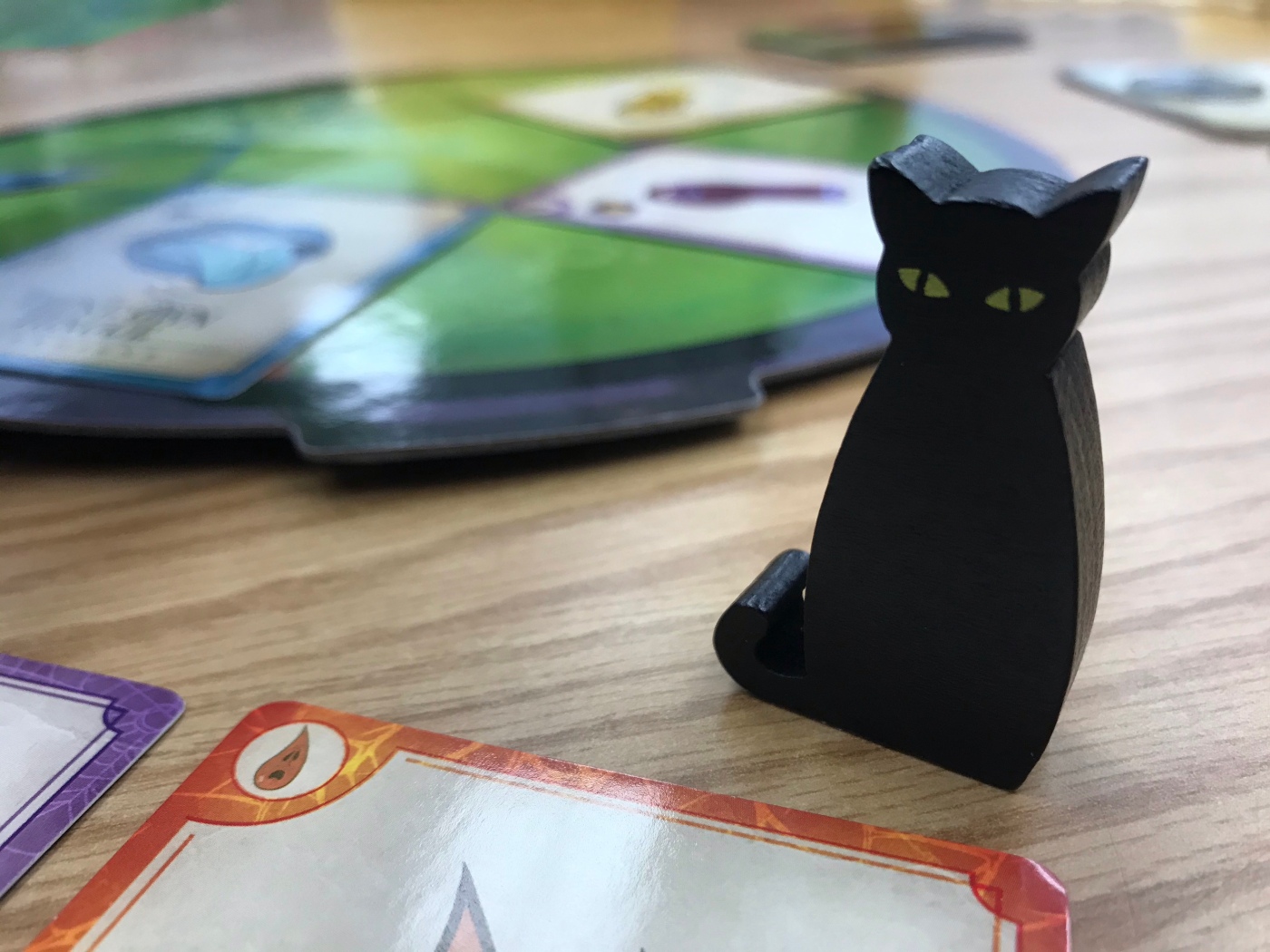 I really should like this game. I have my 50th anniversary Disneyland hat, my Castaway Cay 5k medal, and my Kungaloosh! pin right next to my computer as I write this recap of our recent plays. Disney Villainous is still one of my favorite three player games.

Disney’s Hocus Pocus Card Game is a 2020 game from Ravensburger designed by Prospero Hall, with gorgeous art from Ann Marcellino (no relation to Walt’s home town, as far as I can find.) It is geared for two to six players, sold at Target so it is marketed for newcomers to the hobby and veterans alike, and plays in about thirty minutes.

In Hocus Pocus, players will work cooperatively to “stun” the Sanderson Sisters, witches who have come to terrorize your town by stealing all of the little children so that they can live forever. We’ve snuck into the house where the Sisters have a big cauldron brewing up the potion they need. Players will drop ingredients (suits) from their hand of cards, and if they can ever get all of the colors or ingredients in the cauldron to match, then that witch is stunned for the next round and cannot cast spells. Stun the Sisters three times before the ingredient deck runs out to win.

The ingredient cards are necessary to stun, but they can also help and hurt you in other ways. If a player plays a card with our old friend Binx the cat on them, that’s good, because now you can play your hand face up during the round. (The rest of the time, players cannot reveal their hands, and are only allowed to ask one generic question during their turn, things like “Does anyone at the table have green cards?”) But, if they play any cards that have a spell book on them, then the witches retaliate by playing a spell — and almost all of them are bad.

If you have never seen the 1993 film starring Bette Midler, Sarah Jessica Parker, and Kathy Najimy, some of the artwork and jokes in this game will be lost on you, but I think you will still appreciate the care that Ravensburger and Prospero Hall put into the production. The box itself has a hinged lid that opens up like the spell book from the movie. 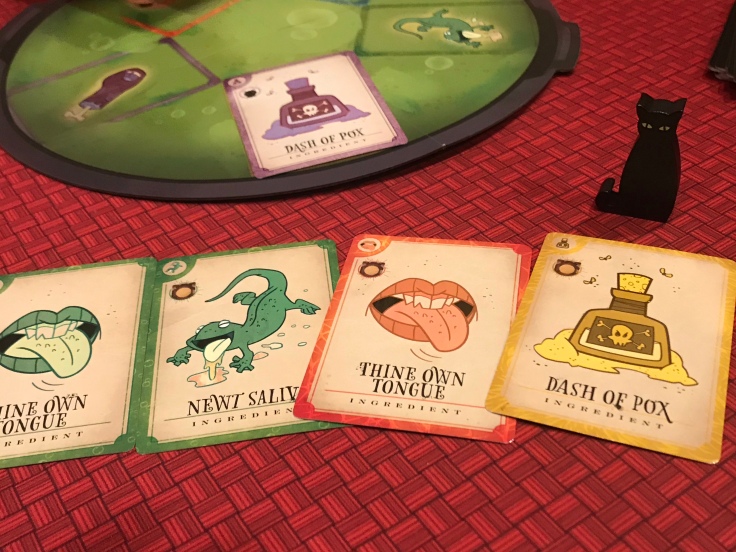 The game also comes with a fold out big cauldron that looks like a gumbo pot ready for some roux, and a small board to track the stunnings you give to each of the Sanderson sisters. It includes a small time tracker cardboard token for players to move to the early morning sunrise, as well as my favorite bit in the box: a cool little Binx cat meeple that has downright spookily painted eyes. 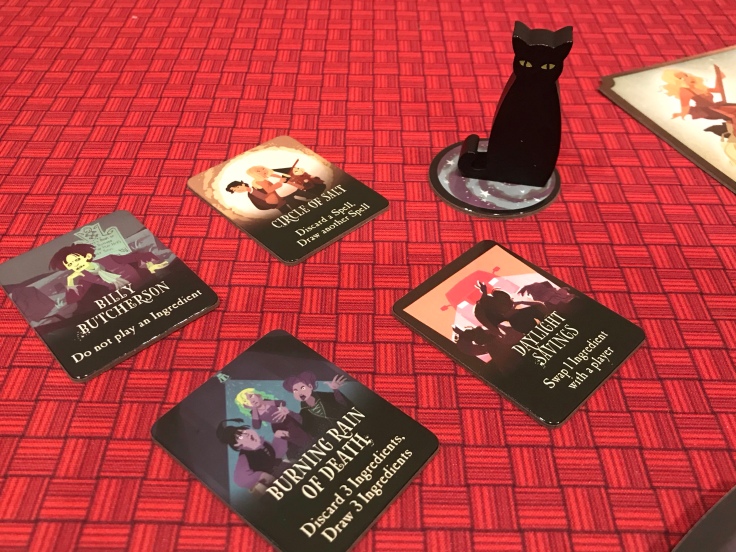 All in all, this is a great production especially for the price. You can regularly find this game hovering around $15-20 at Target, and that’s a good deal for what is in the box. I wish the game’s card decks were not so plasticy in feel, as they tended in our box to stick a lot until we had at least a half dozen games under our belt, and even then, they felt a little too close to a mass market game than I’d like.

The premise of the game is easy to teach, especially if your friends have seen Hocus Pocus, the movie. It’s Halloween night, the Sanderson sisters are hell bent on scooping all of the children so they can survive 2020 and see what’s on the other side, and it’s our job to stun them three times. That should be a compelling theme for newcomers and vets alike, an incantation that should be easy to cast and powerful in its effects.

But something happened inbetwixt starting the spell and casting it successfully.

I’ll admit that there’s a lot to like. The artwork on the spell cards are playful representations of the three witches with various poses and fluff text that call to mind funny scenes in the movie. The box is cute and looks good on your shelf, looking like the actual spell book from the movie complete with tentacle.

And drama and tension exist in the game. When players do stun a sister, either just moving closer to the sunrise or winning the game outright, that moment creates high five excitement that is very, very satisfying. The inclusion of the four bonus action tiles, that can only be used once during the game, feels like a lot of help early on, until the backs of the tiles cruelly stare up at the players in the third round from use. Each time players have to decide to use one of the action tiles feels like an important moment. 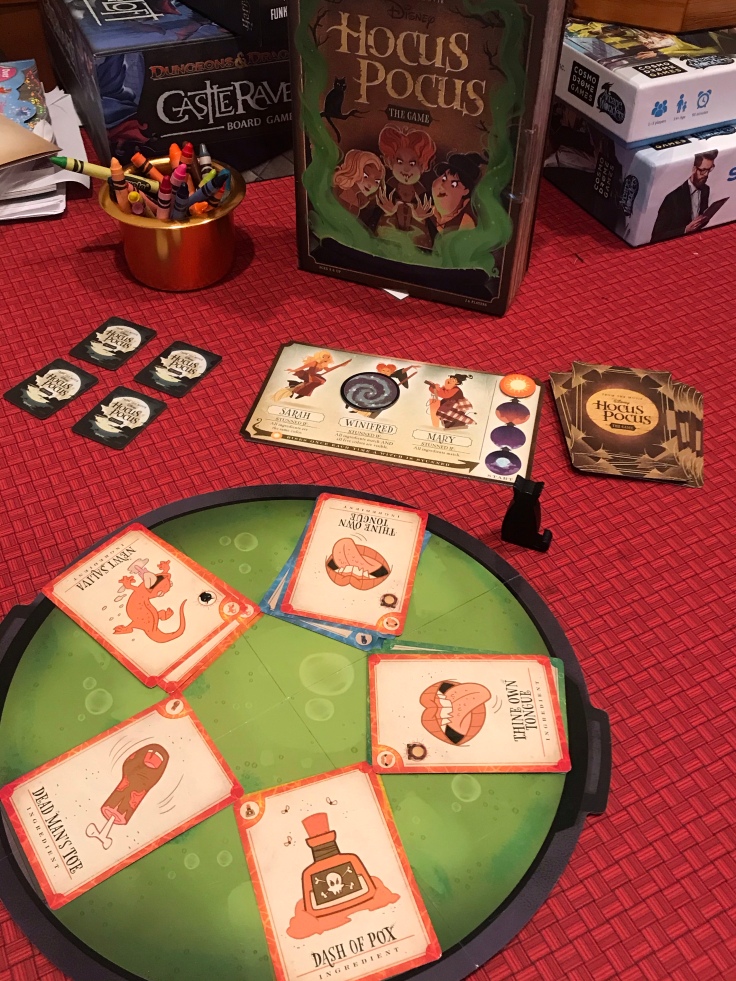 And best yet, the game is challenging. It is not a roll over. Players will have to utilize every tile, every lucky draw on a spell, every well timed question that leads to a double move in the cauldron for the win.

So yeah, the game is challenging and thematic and well produced, and should be right up my alley for all those reasons and more. But, sadly, this spell misfires for me, spitting out little fizzly roman candle balls rather than beautiful emanations of light and majesty. Even though I kept playing the game at play counts of two, three and four players (with COVID-19 still around at the time of writing, that’s the best we could do) until I won, it was more about wanting to add a notch in the win column rather than enjoying the experience per se.

That being said, the puzzle of the game chipped away at my initial blasé attitude little by little each time we picked up the box. While I don’t think a game aimed at a mass market segment, but yet with enough gameplay to keep hobby gamers interested, should need that long of a head start before crossing the finish line, I appreciate the fact that the game has been growing on me after each play, but at the end of each game, win or lose, I felt like I was completing tasks rather than enjoying a game. I wanted to win, but I never felt invested in the game play, a very unusual feeling for me.

And I may be the curmudgeon here. My wife loved the game, really enjoying the fight that the strongest sister, Winnie, inevitably puts up in the third round every time we get close to winning. Maybe it’s because she loves the movie more than me? The school game group enjoyed the game, too. Maybe it’s me? I don’t think so — I think for me it is because cooperative, hidden information card games have to really do something special after I played The Crew so many times over the last year. Where The Crew shined in giving players short bursts of satisfying game play as you run through each trick level, Hocus Pocus has a few rounds where the stun happens quickly, but many more rounds where it takes a lot longer due to the effect of one of Winifred’s spells or a lack of available cards in player’s hands.

So, here it is. Disney’s Hocus Pocus Card Game is a well produced, streamlined, almost elegant cooperative game with a great rulebook and the right play time and difficulty level. If playing cooperative card games where each player has to deduce what the other players are doing and apply those deductive skills to play cards to the cauldron efficiently to win sounds like something attractive to you, take a look at Hocus Pocus. And yes, if you like the IP, by all means give the game a try.

But do not be surprised like I was if you find that the game itself feels as satisfying as watching just the middle reel of a movie like Hocus Pocus: you will eventually figure out what is going on, but you might not be emotionally invested in the outcome.