Hey board gamers, BJ from Board Game Gumbo here back with more tales of gaming down on the bayou. This has been a tough time for getting in person multiplayer games in, but luckily, I have a few gamers at home, and some steady friends who will get together online frequently.

Hit us up on Twitter or on Facebook and let us know what games you’ve been playing during this crisis and what games you think we should play!

But that’s enough blather, let’s get to the games!

I was not a big fan of Feld games until I bought Aquasphere from a friend at Dice Tower Con 2017. It had just enough puzzly goodness plus an interesting theme that I was hooked. I’ve now played Castles of Burgundy 30+ times since then, and I try every few months to add a new Feld to my game experience. None seem to top Castles of Burgundy and Aquasphere. So far.

Because I love Castles of Burgundy so much, I was at first greatly interested in the “spiritual successor”, Castles of Tuscany, for a few reasons. CoB has never been lauded for its artwork and production, but Tuscany had a gorgeous looking cover. The Tuscany region is one I love to read about and can’t wait to visit someday. And the game promised a “streamlined” rule set that perhaps would open up the table to more gamers.

To celebrate Essen Spiel Digital week, I gathered up some friends to play it online on Tabletop Simulator.

Wow, what a pleasant surprise. Castles of Tuscany looks great even on the digital table top, it plays super fast, which is a great element of any good puzzle game, and it is so, so easy to teach. Alex Goldsmith of the Dukes of Dice and I read the rules together and we were off and running very quickly, clarifying things along the way as we played. My two nephews, Zack & Jerod, were in on the play, too.

On the plus side, I love the modular boards that at least on the first play gave us the feeling that we had some control over our strategy. I also love the way that placing the tiles gives you immediate benefits — points and special abilities — that provided a nice reaction to the gameplay. On the downside, the dual track thing felt a little weird at first, until we realized that it was just basically a reimagining of the way that players generate points in the first game, where completing tiles scored you less and less points as the game progressed.

BJ says: This was just our first play, but it has moved up from interesting to “need to find a copy” in my book. I don’t own Castles of Burgundy, since someone already has a copy in the Gumbo. But, I want Tuscany in my collection now. Hmm….Christmas is coming around, honey. Are you looking for ideas for gifts? 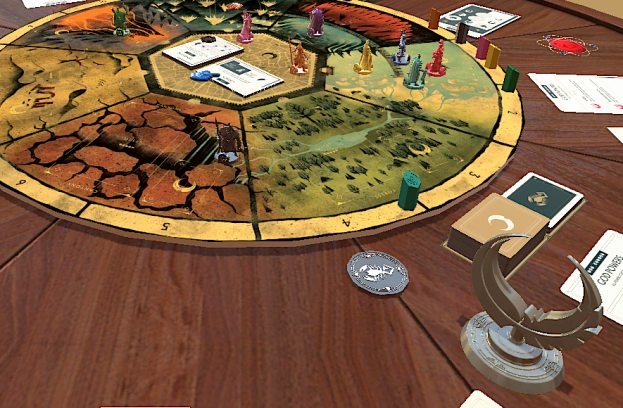 I’ve been hearing a few podcasters these past few weeks chat about a new Kickstarter that just ended from IV Studios called Veiled Fate. The premise sounded interesting: hidden roles, mixed with a deity theme and influential powers and questing on the board, but where everyone’s focus was on trying to figure out who was playing which god. It sounded like a healthy mix of the light questing of Simurgh with the backstab mechanics of Good Critters overlaid with a pantheon of gods that aren’t familiar to me.

We played a four player game on TTS, and we quickly picked up the basics. You want your god to be victorious in points, but no one knows which god you’ve picked. Everyone is watching each other’s moves — is BJ focusing on the teal god’s movement because he wants him to win? Or is this a misdirection?

Plus, there’s just a little bit of luck and hidden action that keeps this from being a straight deduction / perfect information game. Each time you move a god to a quest, you get to play cards that either help or hurt that quest. But other players might have a chance to affect the quest, or even affect the gods that are on that quest, meaning by the time the cars are counted, no one is quite sure what your goals are.

The social deduction part was fun, the questing part was interesting, and I liked the movement mechanic. But, in the end, while taking the peanut butter (strategy) and mixing it with the jelly (social deduction) should have left me with a nice PBJ sandwich, at the end of the game, I was still hungry.

I just kept staring at the fried shrimp po’boy (Deception: Murder In Hong Kong) or brisket sandwich (Shadows Over Camelot) instead.

BJ says: I thought Veiled Fate was a pleasant diversion, that had us talking strategy for a good fifteen to twenty minutes after the game ended. I can’t see myself backing the game (it is still available as a late pledge), but I would not turn down a play of it in person. Zack and Jerod taught me and Dave the game on Tabletop Simulator, and so there’s a caveat to my lukewarm first impressions — I think this game would work a lot better around an actual tabletop. You need to be able to look at Jerod in the eye and call his bluff when he moves Teal for the fifth time in a row.

I never understood some of the backlash on Tapestry when it came out. Very few people that I taught the game to were not fans of it after playing it. (Well, except for Bradly.) Sure, it can fairly be called “Track: The Track Game”, but lots of great games have tracks as their main mechanic. Tapestry has a lot of what I like in games: engine building, a small card market to draft from, beautiful production, and enough player interaction to elevate it from the usual non-interactive euro game.

I was excited when Stonemaier Games sent us a review copy of the new expansion, Plans & Ploys. More Tapestry? That’s a good thing. What did it add? Tapestry: Plans & Ploys added more civilizations, a lot more, added some cardboard tokens to aid in keeping track of who has what building during the game (a very common complaint among reviewers for good reason), some new space tiles, some new buildings to build that are tied to the regular game elements, but also to a new mechanic in the game.

Unfortunately, we have not played the new mechanic yet, which is basically a way to give players some mid-game goals to accomplish. But, we threw everything else on the table this week, and ensured that everyone was playing one of the new civilizations.

I played the Treasure Hunters, while newcomers Josh and Ethan played the Riverfolk and Aliens respectively. Bradley played the Infiltrators, and Dave grabbed the Advisors civ and we were off.

It had been almost a year since I had last played Tapestry, but we had played it a half-dozen times in late 2019, so I was pretty familiar. That being said, it took a couple of rounds to get my engine going a bit and that hurt me in points. I love the way that the new civs all feel completely different and very intuitive.

I knew right away what the Treasure Hunters and Riverfolk were up to — I needed to spread out, grab some various land tiles, then protect them from invaders to ensure that I got all of the bonuses during the game. The river dwellers got a nice boost in points, but had to keep them by covering up as many of the water tiles on the city board as possible, and use those spaces to generate free resources.

Ethan and I really enjoyed the interplay of all of the new civilizations, and they seemed to breathe new life into the game. Next time, we will break out the landmark cards with the mid-game goals and see how much that changes things.

BJ says: Tapestry is still a lot of fun, and Plans & Ploys brings in even more player interactivity, something that some people — not me — thought was missing in the original base game. If Tapestry has gotten a little stale for you, this very inexpensive expansion will add tons of new content for your game. Check it out.