Board Game Gumbo is pleased to present another review from one of our newest members of the Krewe de Gumbo, Jay Bell! Jay is a game designer and graphic designer living (for now!) in Lafayette, and is our Acadiana’s foremost Potion Explosion player as well as a cookie connoisseur. You can reach him on Twitter @TheJayBell or find out more information about him at his design page, Clover Spark.

TLDR: Jurassic Parts brings players into a paleontological paradise, where sometimes there aren’t enough artifacts to go around. To win, you have to earn more points than other players by collecting and building dinosaur skeletons. The theme is channeled very well through purposeful gameplay, but the gameplay as it relates to player interaction often feels disappointing. While it’s meant for 2-5 players, I would say it really only works at 2-3 players. The aesthetics and theme will pull you in, but gamers with low tolerance for punchy, “take that” interaction would not enjoy a day at this dig site.

(Editor’s note:  check out our recent Gumbo Live! Chat with Grant Lyon about the gameplay here, and thanks to 25th Century Games for providing us with the review copy)

Dinosaurs! In a prehistoric land of mystery and marvel, we have grown to learn… okay, I’ll stop. But think about how invested you became just now! Dinosaurs instantly captivate almost everyone, so I was pretty excited to take a look at Jurassic Parts, designed by Kevin Lanzing, and published by 25th Century Games. The game allows players to become paleontologists excavating an enormous slab of dinosaur bones. It’s an area control game with heavy player interaction, and much more to consider than the common caveman might think.

The components and visual aspects of Jurassic Parts are great. Almost five dozen hexagon tiles with dinosaur bone fragments create a nice, modular game board. One thing that I really enjoy about the game board is that it’s meant to be imperfect. “Cracks” in between tiles go along with gameplay. More on that later. 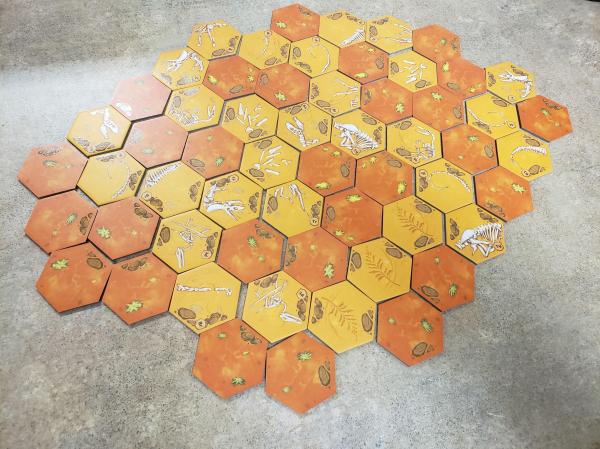 Other components like the Amber resource, the first player marker (a mosquito encased in amber), and the chisels each player uses all support the idea that you are an eager excavator looking to earn glory and acclaim.

Andrew Bosley’s art on the player mats is also worth noting. Each paleontologist is drawn and colored beautifully, with distinct inclusive and highly representative features. The end of the rulebook also includes backstories on how they joined the dig team. It’s a nice touch that reminds me of Atlantis: The Lost Empire, and helps pull players into character. 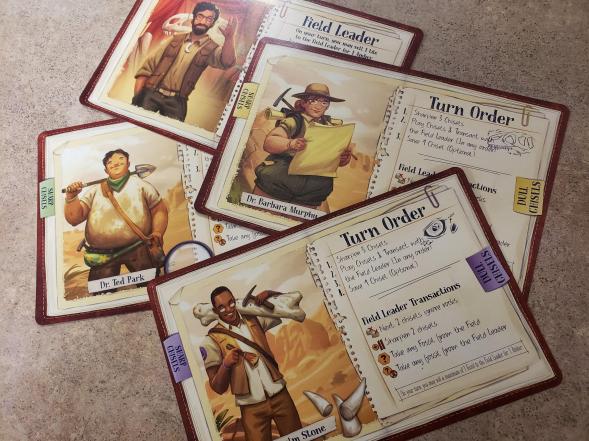 As much as I love the way Jurassic Parts is executed visually, the gameplay just wasn’t as exciting. The object of the game is to place chisels along a path that separates (or splits) a part of the fossil slab. Doing this allows you to collect dinosaur parts, and ultimately earn points. I mentioned how space or “cracks” in between your game board are incorporated in a purposeful way. Here’s a photo of what I mean.

Your chisels are meant to dig into, then sit in between those spaces. It’s designed to encourage you to leave the cracks during set-up, because the rock slab isn’t meant to be perfect. I think that’s a really appropriate way to incorporate layout “fiddliness” that would normally drive gamers into extinction. Sorry, was that joke ptero-ble? Okay, I’m done.

The rocks shown on some sides of the hexagons are “tougher to break” and require players to pay extra chisels to lay one there. This helps the game’s pacing a bit, because you’re limited in the places you can place chisels, to an extent.

Other players can contribute to the same split you’ve started, and if they contribute more chisels than you do when the split causes hexagons to break off, they gain priority in picking which dinosaur parts are collected. This is where I see a flaw in the game. Other players overtaking you in this way can make a big difference in your opportunity to earn points. You’ve got to be very strategic about the placement of your chisels in order to keep control of an area (the split line), and at higher player counts it’s almost impossible. The two or three players before you have ample time and tools to foil your plans. 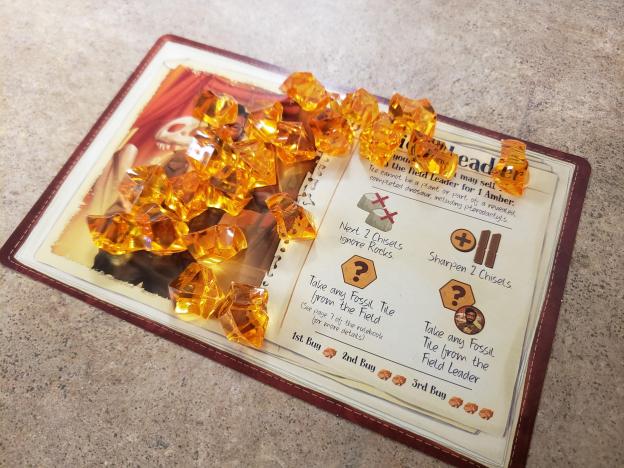 Amber is a resource that allows you to use special actions, and is earned by fully completing dinosaurs, or giving one of your dinosaur tiles up. I won’t go into too much detail on what each special action is, but they’re listed on the each player mat, and the Field Leader card, who you actually pay Amber to in order to perform them. Without Amber you’re basically reaching for victory with tiny, T-Rex arms. It’s easy to overlook how important Amber is in initial plays, and having it early on will make a big difference. 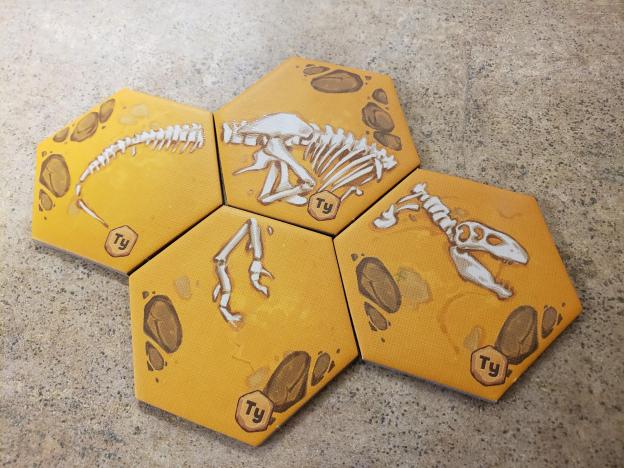 I don’t particularly mind heavy or directly competitive games, but with Jurassic Parts it doesn’t feel like you have enough opportunity to mitigate those situations. There are “wild” piles of bones, though. These hexagons can be substituted for a missing dinosaur tile, and let you complete a T-Rex with, let’s say… cranial damage.

There are also optional special power cards that offer nice effects, as well. The rulebook leaves it up to players to determine how many of these special power cards are given out at the beginning of the game (0, 1, or 2). They all fit the theme pretty well, and can definitely help when you’re stuck between a rock and a… you get the idea.

Scoring objectives are laid out really nicely along with tile distribution, and there are some plant fossils players can collect that have compounding points. This part of the game is really well done. 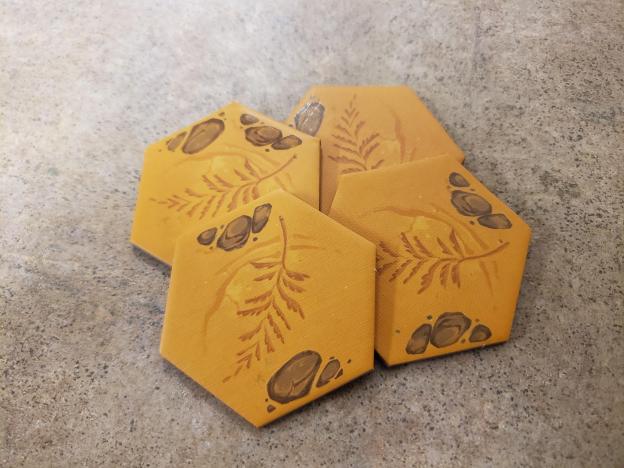 There’s way more to Jurassic Parts beneath the surface of the simple gameplay outlined on your player cards, and you’ve got to keep that in mind. The theme feels well integrated, but the gameplay doesn’t come through, especially at 4-5 players. If there were more tiles for higher player counts or an adjusted tile distribution mechanic then maybe it would play better. While the game’s objective is pretty straight forward, there are a lot of small things (Amber, rocky sides of hexagons, Field Leader transactions, special power cards, etc.) that just don’t mesh well enough to create amazing gameplay.

Any who loves the idea of uncovering and building dinosaur skeletons is going to want to try Jurassic Parts. What sucks is that with too many players, you’ll only build a dinosaur or two. Hopefully, you’re lucky enough to build a Triceratops, and put it into an awkward yoga position. 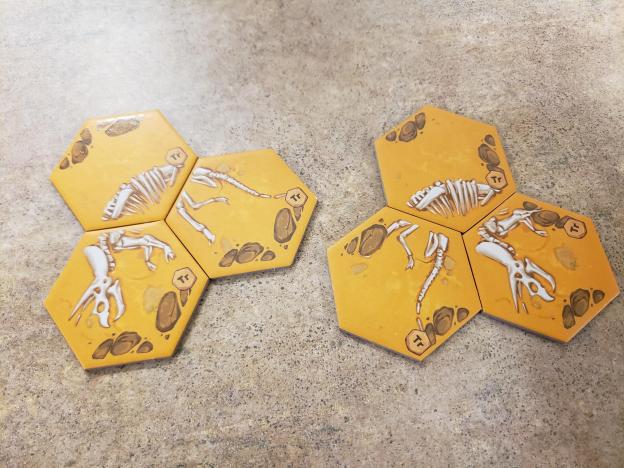