Hey board gamers, BJ from Board Game Gumbo here, back with another edition of the Way Too Early Top Games of X Year post. (This is part two, and for the look at games twelve through seven, click here.)

But at least we got to play some great games.

Unfortunately, like most years, publishers found a way to ship out more good to great games than we could possibly play in one calendar year. Compound the lack of time and money resources with a pandemic, preventing us from playing games with our usual game groups, and add a dash of convention cancellations, and let’s face it, no list we confect in December will ever be really complete or accurate.

But that’s never stopped us before! We love lists here, so let’s list away! Here are the top six games we’ve played so far in 2020:

6. Rajas of the Ganges: Dice Charmers

Shhhhh….don’t tell anyone, but I really didn’t enjoy Rajas of the Ganges. So, when asked to play the roll-n-write version, I was honestly not that excited. Then I tried Dice Charmers for the first time with my online Yucata group (Dan, Don & Andrew), and made a couple of moves late that comboed up in a nice, satisfying fashion. I tried it a few more times, and started seeing how the gears of the game all interlocked, and yet, even after a dozen plays, there does not seem to be any “best” way to win. Dice Charmers rewards one thing — the ability to make your middle and late moves count for four or five, and to do it as often as you can.

And that’s when it hit me. Some people call the recent craze of making every board game into a randowriter an unnecessary development. But au contraire, mes amis! When done well, a good randowriter can supplant the original game!

That’s Dice Charmers in a nutshell. It has everything you want out of the original game – competing point tracks that meet somewhere to end the game, special powers, critical decisions about how far to move down the river, and tile laying but streamlines the actions and integrates the gears together even more. If you like games that are going to give you multiple chances to feel smart when you pull off a particularly combolicious play, try Dice Charmers.

For fans of heavier randowriters like Fleet: The Dice Game or any of the Ganz Schon Clever series. Plus, if you like engine building combolicious games like Gizmos or Space Base, I am 62% sure you will love Dice charmers.

Every once in a while, a game pops up that you were not expecting, slides its arm around you and whispers sweet little nothings in your ear. Some combination of artwork or theme (or even mechanics for those of you who are into that sort of thing) captures your imagination like the first time you heard “Only Time Will Tell” back in 1983.

Caretos colored me intrigued at the first glance of the cover while perusing W. Eric Martin’s excellent pre-Essen geek list. Its cartoon depiction of local Portugeuse legends of monsters that prey on lonely villagers fired my imagination up.  Then we laid it out on the table, persued the well done rule book. I was hooked by its fairly simple rules teach, just a frog’s hair above the rules in Ticket To Ride, but with a significant enough upgrade to provide depth of play for any gamer.

But the cool whip on the pecan pie was of course the mechanic of playing not one but two player monsters in the game, each and every one of them with interesting and unique special powers. That’s right — it’s double the pleasure and double the fun. With just this simple little addition, Caretos plays differently depending on what characters you have in your stable that round, and each player will have just that slightly different play experience even in the same game.  Caretos is well designed, well produced, and a perfect family game that also plays well with any gamer group — the perfect “one hour wonder.” Don’t believe me? Here’s our full review, or you can check out a chat I had with Dan Thurot of Space-Biff! all about my recent plays on Gumbo Live!

For fans of Thurns and Taxis or Five Tribes who want a much better theme.

After resisting for many years, the siren call of Stefan Feld’s designs have beckoning me to the table. I’m playing as many as I can, with mixed results, and with Aquasphere and Castles of Burgundy easily cast as my favorite.  Castles of Tuscany at first glance has nothing to do with Castles of Burgundy, yet the more I play it, the more I see CoB’s homages and delicate fingerprints. 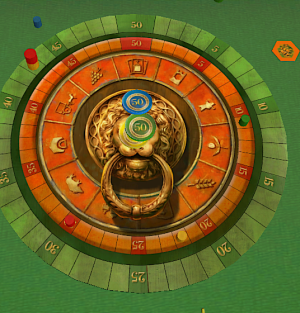 Tuscany is a breezier, more streamlined version of its older sibling. I love the art, I love the TtR card collection, but I especially love the pace of play.  Sure, sometimes I’m in the mood for a meaty euro game that has so much crunch to it that my brain is still whizzing at ninety miles an hour when I finally lay my head down after Gumbo game night. And sometimes, I just want a mindless little party game, where the end goal is laughter not necessarily having the most points.

Tuscany fits squarely in the middle — a game that has strategy, but has plenty of luck that can be mitigated, and a game where the turns are taken rapidly. It’s another one of those “It’s Your Turn” games, where you really can’t even check your phone for the latest Twitter notification without an angry glare from someone for Not Being Ready.

I have only played it four times now, and all have been online as I don’t have a copy yet, but it is going on my “to buy” list. Time to head over to my FLGS and see if they have it in stock!

For Feld fans, of course.

When I first did this list, I actually forgot about The Crew — it’s been that long since I’ve been playing it. I demoed games for KOSMOS at BGG 2019, and if we had copies, we could’ve sold hundreds. EVERYONE was asking to demo the game. Tom at KOSMOS was kind enough to loan me a box, and we played it all night with the Gumbo krewe.

Fast forward a few months, and we got our own copy. But then COVID-19 struck! Oh no! We homebrewed a way to play online and dove right back in. I’ve never gotten a group to geaux farther than around 14 or 15th stage, but I’ve taken a bunch of groups through the first 9-10 sessions, and *almost* all have loved it.

I love the tension, I enforce the theme, and yet I stink terribly at this game. But it was honestly and easily one of the top three game experiences I had during this year. In fact, I would not be surprised that by the summer, when we do our real Games of 2020 edition, The Crew is not by then my favorite game of 2020. I just need a few more plays to get me juiced up again.

If you want more proof, check out our chat with Jonny Pac all about The Crew!

For fans of trick taking games, or gamers who want to introduce the mechanic to their family or game group.

We are getting to the level of games where I had a burst where this was all I played for a few weeks. The Crew was one of those, but Oceans was an even more compact spread of game plays in a short time. For two weeks straight, this is all I played!  There was so much to explore!  (For our full review, click here.) 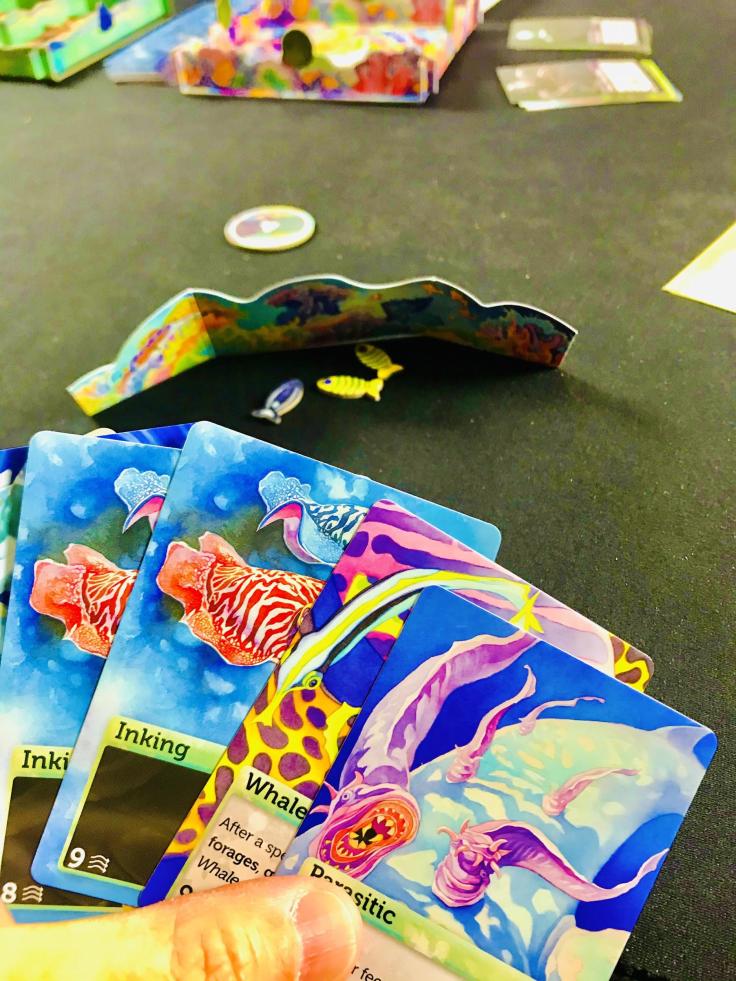 What sets this apart from the usual tableau builder is that in almost every game there is a ton of player interactivity. Yes, that can aggravate players, but there are ways to defend and counter attack that make the ocean of cards feel alive. Plus, the addition of The Deep cards — seemingly hundreds of cards it feels like I still have yet to really get to know even with a half-dozen plays — just amps up the enjoyment and the replayability for me.

And last but not least, Oceans is the closest I have come to scratching my 90s Magic: The Gathering itch. I’m just not in the mood to chase cards and build decks anymore, and who needs to?  NorthStar Games gives you an Oceanic themed Magic:The Gathering experience in a beautiful box. Look no further, former dual land wielders, Oceans will satiate you like not many table top games can.  (And we got the scoop on the development right from Dom Crapuchettes here.)

For fans of Imperial Settlers who want (or don’t mind) more interaction, or for those longing to crack open booster packs of Antiquities again.

Ah, we’ve reached the pinnacle of 2020, a pretty low bar one might say. But not in gaming! I’ve played about 40 games released this year, a lot smaller number than I’ve played in years past. When I think about the top games of the year, the ones that rise to the top generally make me puzzle out my moves long after game night is over.

Even with only two plays (both live plays of 2p and 3p variety), there was one game that I played this year that absolutely haunted me and my dreams. It was the one that engendered “parking lot meetings”, where Bradly and Jay and I sat around the table after the game going over what happened, what we did right and wrong (lots of the latter, on my end), and what we could do differently next time.

You’ve heard us talk about The Envie Game on Gumbo Live, right? Well, if  we were having a game night right now, there’s no question what ENVIE game I would choose — it would be Beyond the Sun.

Why? At first glance, the tech tracks that are present seem pre-routed, and the board looks blase. Then the game starts, and this humongous board starts to resemble the combination of the vastness of space and time and technology spread wide open before you.

Freedom. Myriads of options. Discovery. All of this is presented to you quickly, like stars whizzing by as you hope your hyperdrive can make the Kessel run in 12 parsecs. It’s exhilarating. Then, there’s a glance to the left where a smaller space board beckons, with planets and stations just waiting to be explored. Finally, drift your eyes back to the player board, to spy a special power just waiting to start tap-tap-tapping against your skull, wanting you to shape your strategy just to take advantage of your player board.

I can’t wait for our game nights to start again. Beyond the Sun represents everything I want in a thematic euro game, and it has just enough player interactivity to satisfy even the most hardened euro hater. (And we did a deep dive into the game with our buddy Dan Patriss of The Geek All Stars right here.)

For everyone, but especially people who love tech trees.

So that’s our two part series on the top games released in 2020 here in the States.  I’ve got some ideas on one more blog post — maybe some jambalaya for you before the New Year starts!  Let me know what games we missed out on or should have played from 2020, or even an older game that you recently discovered!