Board Game Gumbo is pleased to present another review from one of our newest members of the Krewe de Gumbo, Jay Bell! Jay is a game designer and graphic designer living (for now!) in Lafayette, and is our Acadiana’s foremost Potion Explosion player as well as a cookie connoisseur. You can reach him on Twitter @TheJayBell or find out more information about him at his design page, Clover Spark.

TLDR: If you’re looking for a fun, family-friendly game, you can’t really go wrong with Frenemy Pastry Party. There’s light drafting, tons of decision making, and a nice cooperative element that balances the ultimately competitive point scoring and private objectives. As for the art and aesthetics, they’re utterly scrumptious.

You know what’s nice? Cake! You know what’s debatably even better than cake? Cute creatures! Fremeny Pastry Party takes both of those and encourages the best of friends to torment each other with the trickiest of decisions.  Frenemy Pastry Party is a 2019 game designed by Jesse Li, with art by Lazy Cat Amix and Sherry Huang, and published by Solis Game Studio for three to six players that takes 15-30 minutes to play. Solis Game Studio was kind enough to provide us with a review copy.

(Editor’s note: you can check out our previous review of another Jesse Li favorite, The Flow of History, right here, plus a recap of one of our plays of Ponzi Scheme here.).

I was a little surprised to see that Chris Solis had a hand in this one. It doesn’t really fall into the battle deck style of games he’s known for, but with Jessica Solis they’ve published a nicely balanced, easy-to-learn card game that does have the slightest pinch of battling. I guess you could call it, “A Solis Game Studio secret ingredient.” Things can get surprisingly strategic once you sink your teeth past the icing.

My oh my, talk about mouth watering! The theme association in Frenemy Pastry Party came to life the moment I opened the box and touched the cards. They have a coating that’s pretty noticeable, adding a nice, smooth, and heavy weight to them. And that’s just the teaser! The art on the ingredients (fruit) and cake cards are wonderful. 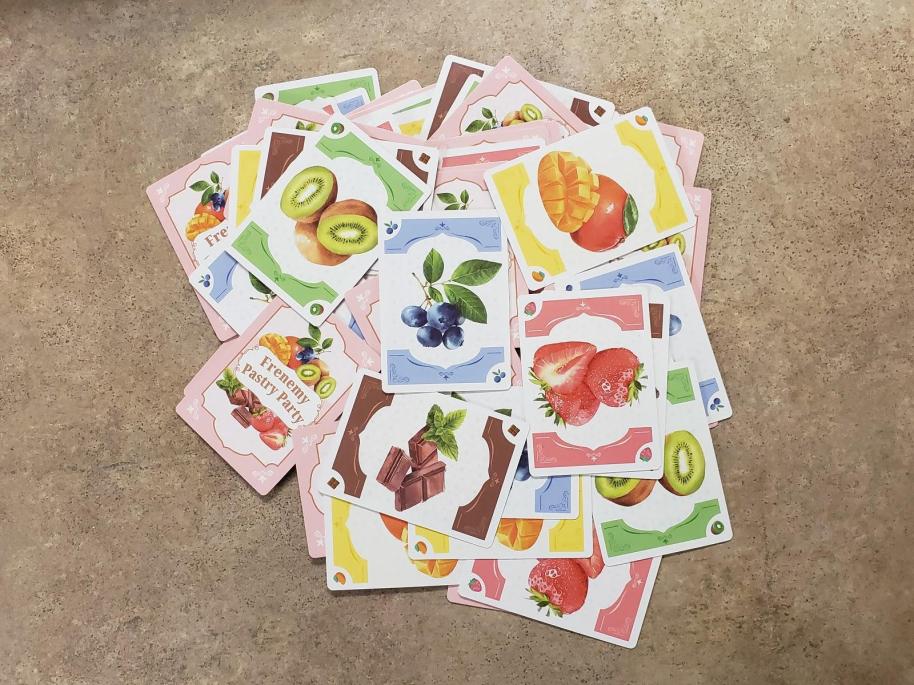 Just imagining a pastry shop with these beautiful treats makes my mouth water. I’m normally not a big fan of cake, but these aren’t your normal cakes. They’re beautifully blended chocolate, strawberry, blueberry, mango, and kiwi masterpieces. I could stare at them all day. Let’s not even discuss how much I’d enjoy eating them. 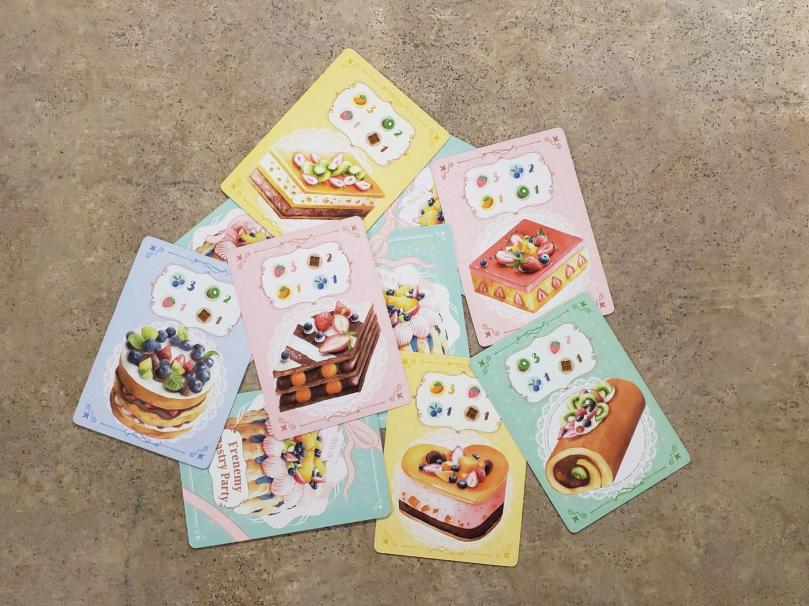 As we know, good things often come in threes. Such is true with this game. Fruit, cakes, and creatures! Players take on the role of one of seven adorable animals. There’s a shiba inu, cat, fox, otter, rabbit, capybara, and my personal favorite, a tanuki! The choice to include a few rather unique animals is a nice topping.

More functionally pleasing, the three different card types (ingredient, cake, and animal) all have different card backs and borders so it’s really easy to separate and distinguish the stacks.

Gameplay is really straight forward. The goal is to earn the most points, through baking cakes, contributing ingredients to your friend’s cakes, and your animal’s hidden objective. On your turn, you can take one of two actions, either adding ingredients to your hand, or trying to bake a cake. This is where things get strategic. You’ll need to balance contributing to your friends’ cakes, getting them to contribute to your cakes, completing your hidden objective, and not allowing your frenemies to pull too far ahead. 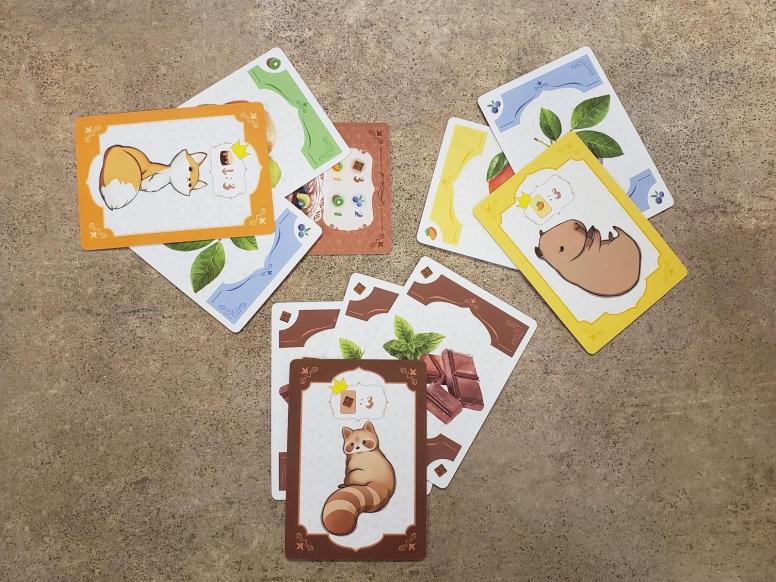 Ultimately, it comes down to weighing out which actions are best for you. The image above shows a scenario where the tanuki would greatly benefit from contributing ingredients, and the capybara would gain some benefit, while the fox would gain 5 points for baking a cake and potentially be moving further away from completing its hidden objective of baking the least amount of cakes. Figuring out everyone’s intentions and trying to use them to your advantage is a fun and playful element of the game.

There’s really only one element of the game that I dislike. Of the seven animals, two are noticeably more difficult to play than the others: the fox, and the otter. Their hidden objectives aren’t to simply have the most of one ingredient contributed, so they require a different playstyle.

I didn’t get a chance to try the game at a play count higher than three, (darn you, pandemic crisis) so my perspective is a bit limited. Because the game ends when either the ingredients or cakes run out, a higher player count would only end the game faster. I do think Frenemy Pastry Party would play well at any count, based on the scoring of my three player games, and what I imagine more players would bring into the mix. I think the only thing that would be rough about higher player counts are those who have to play as the fox or otter, but I could be wrong. Those animals might be great to play at higher counts.

Overall, it’s a really enjoyable game. The gameplay fits the idea of frenemies so well. You truly get pulled into a love-hate, give-and-take, “which decision do I make” experience. You’ll laugh, bite your lip in frustration, and likely take your friend’s most coveted cake for yourself.

Oh! There’s also a nice playmat available to purchase with the game. It offers an alternate way to set up the play area and some beautiful art, but you’ll do just as fine with the set-up shown in the rule book.