Board Game Gumbo is pleased to present another new review from Sagan Ezell, fellow game group member. Sagan is an omni-gamer who lives in Lafayette, Louisiana, and helps run the Southern Board Game Festival. Here are his thoughts on the game. You can reach him on Twitter @SaganEzell

Every now and then, a game comes along that tells you just about everything you need to know about it, right there in the title. Instead of naming itself something that sounds cool but is ultimately meaningless (Century, Scythe, and Terra Mystica all come to mind here), it just decides to come right out with its core idea in the simplest possible way.

So, respecting the spirit of getting on with it, let’s talk about Fire in the Library. 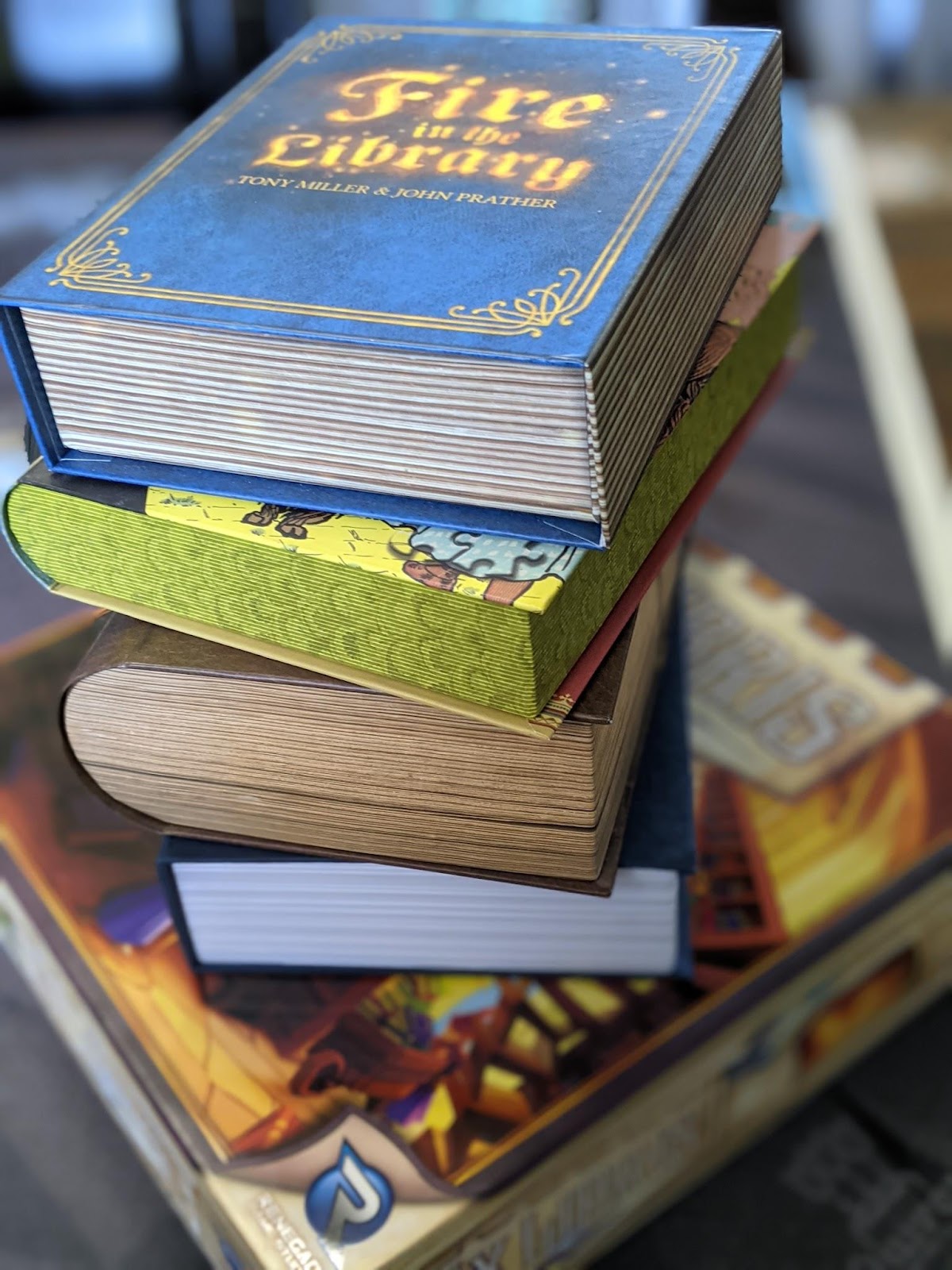 How did I get so many fake books in my house?

Published by Weird Giraffe and designed by Tony Miller and John Prather, Fire in the Library is about exactly what you think it is. There is some lore that you can locate and dig out if you’re interested in it, but the rulebook of this one drops all the thematic pretense right off the bat. A grand two sentences on the first page tell you “Hey, there’s a fire, and it’s up to you to save as many books as you can to score points.” After that, it’s straight into rules and gameplay.

As you may expect, this is a push-your-luck game, where on your turn, you blind draw cubes from a bag to try and get those books to safety. Differently colored cubes represent different genres of book, which are worth changing “knowledge point” values depending on how much of that section remains in the library.

Red cubes are also in the bag, however, representing the ever spreading fire. Drawing two red cubes will end your turn and force you to forfeit the books you’ve rescued so far instead of banking them for victory points.

On a turn, you simply draw cubes until you feel like you need to stop, bank the points from books you managed to save, and then play passes to the next player.

Simple, easy, and straight to the point.

As the game continues, the 4 different sections of the library will accumulate damage, until the point where one section is totally destroyed. This will collapse the whole building and end the game, where final scoring will happen and a winner will be decided.

In my experience, most Libraries found their end around the 30 minute mark, and there wasn’t too much variation in this among the different player counts.

To add a bit more nuance into the basic push-your-luck mechanism, we have the turn order selection system, and the tool cards. To determine the turn order, players will choose Turn Order Cards in order of current score, starting with the lowest scoring player.

In addition to the player order, these cards also feature the slots where players will be placing their saved books and fire tokens as they draw from the bag. This matters because some of these slots also depict a fire symbol, which makes that space much more dangerous than others. Normally, a player will go bust when they draw two fire tokens from the bag, but if they happen to put even a single fire token onto a space with a fire symbol, their turn will immediately end and they will lose everything they gained that turn. The sooner in the turn order your card is, the more fire symbols appear on it.

These cards also matter because they vary the amount of “bravery points” that a player can earn. Cards that have more fire symbols also have more bravery points available, which is a scoring system that rewards players going deeper and deeper into the dangerous fire spaces.

At this point, we have the main scoring and gameplay systems down, but there is one more system at play here, and this one adds the most variety and strategy to the game. Tool cards are special cards that players earn over the course of play, usually by being a bit too brave (going bust will net a tool as consolation) or not brave enough (players who stop their turn before getting into the fire spaces will get a tool in addition to whatever books they save, instead of getting bravery points.)

Tools can have many different effects, from scoring some end game points, to manipulating the cubes remaining in the bag, to cancelling the effect of just drawn fire cubes. Having the right tools in your hand to mitigate the risk of fire spreading is essential to getting by, and unless you have exceptional luck, you can say goodbye to your chances of winning with poor tool management.

What’s good about it?

Fire in the Library is fast and simple. It’s easy to teach just about anybody, and plays fast enough that there won’t be any time for most players to get bored and disengage from the experience. Push-your-luck games tend to have fun and exciting moments, even if the strategies employed aren’t exactly the most complex things you’ll think about for the day.

The tool cards do increase the options players have moment to moment, and they also function as a bit of a catchup mechanism, since the only way to get them is by having turns that are worse in the sense of pure point generation. Most of the rounds that I have played have felt pretty back and forth, so a runaway leader isn’t much of a concern here.

Additionally, the production quality is pretty nice, with the cards being a good quality, cubes being nice and chunky, and the box itself taking the appearance of a fake book.

Of additional note with the box is that it has no lid, but instead opts for a flap with a magnetic closure on the side. When I first got the game, I was a bit worried about it potentially coming open when carrying it around, but I haven’t yet had any problems with it.

The game box is compact, and it looks nice on the shelf. All the art is well done, and the graphic design on the cards is clear.

What’s less good about it?

First, the small stuff. While the aesthetic of the game was very nice, the theme didn’t come through for me very strongly. Additionally, all of the artwork in the game is a collection of fairly nice fantasy pieces, but the bag we are drawing cubes from was made from the same bolt of fabric that Guy Fieri uses for his flaming shirts. It wasn’t necessarily bad, it just didn’t really mesh well with the rest of the components.

I could also find slight gripes with the rulebook, which was a bit long and wordy (did we really need a 32 page book for a game this simple?), and with the scoreboard, which was on the inside cover of the box and would not lay flat on the table because of how the whole thing was constructed.

Still, these things are very minor, and only take away from the whole package in a superficial way.

Fire in the Library is certainly not a bad game; however, it’s tough for me to call it a good game either.

Personally, push-your-luck isn’t one of my favorite mechanisms to see in a game, and for me the main issue here is one that plagues many push-your-luck games. The decision making presented tends to be very straightforward, so it does come down to JUST luck most of the time.

Being a luck based game isn’t inherently bad, but Fire in the Library has all the trappings of a game that allows you to mitigate that luck, but usually nothing comes from this. The game doesn’t strip away all opportunities to make a clever play, but it doesn’t offer many of them, and so upon repeated plays, I end up feeling like I am just going through the motions.

It’s very simple to find the optimal timing to play most of the tool cards, which works against the idea that they can bring about new strategies from game to game. Clearly, the design aim here was something quick and to the point, which I did feel was a goal that was realized, but at the cost of feeling a bit too simple to remain enjoyable for long.

This is partially a problem with the genre, but even among other games that feature push-your-luck, Fire in the Library doesn’t do much to set itself apart. I feel that I am much more likely to bring out something like Deep Sea Adventure to fill the gap of a very simple game in a similar style, as it streamlines the core gameplay loop even further. It can achieve the same strategic and thematic effects without the additional setup, rules, and space requirements present in Fire in the Library.

The trap here is that pure push-your-luck games will always reside on the lighter side of the complexity spectrum, and I feel that by trying to add the additional tools, phases, and rules, Fire in the Library loses the core appeal of the genre. It’s a bit too clunky to compete with Deep Sea Adventure or Welcome to the Dungeon in the realm of pure, simple, luck games, yet it’s not quite well developed enough to change into something more epic.

Take games like Clank! or Quacks of Quedlinburg, for instance, which heavily feature push-your-luck elements, but add so many more things they become totally different experiences.

By walking in the middle ground, I get the impression that Fire in the Library is either a light push-your-luck game with a bit too many different ideas attempted, or a middleweight game that has too few strategic elements to carry it forward.

I was lukewarm on this one. If you are a fan of many other games in the genre, this could be a worthwhile pickup, but I don’t think that Fire in the Library brings enough to the table for me to recommend it over its contemporaries.

That said, I’m not an expert on push-your-luck games, but if you are, I bet you won’t have too tough of a time deciding if you want to take a gamble on adding this one to your collection.