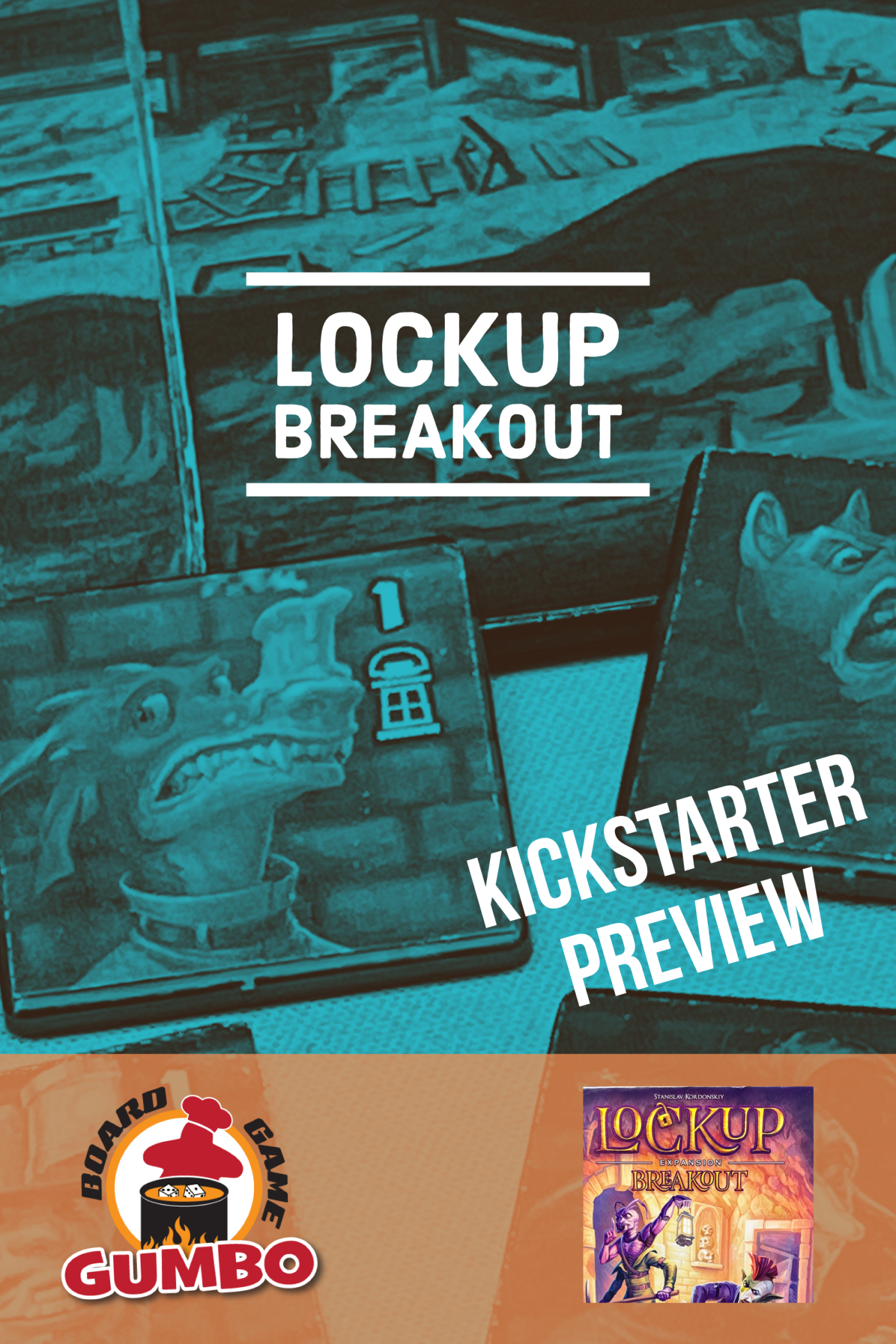 Conventions have always been a cool place for me not only to play the latest hotness, but also to catch up on classic games I’ve missed and the best games that have been published recently that flew under the radar a bit. The loss of these social gathering times has meant that a lot of games have escaped our notice.

But we were lucky enough right at the start of the pandemic to get a copy from Thunderworks Games of Stan Kordonskiy’s Lockup: A Roll Player Tale. We chatted about the game and our review live on Gumbo Live with Steve Finn. Big thanks to Jeremy Howard from Man v Meeple and Jambalaya Plays Games for putting it on our radar.

Since then, we played it a bunch in person and online, and even did a full unboxing and overview of the gameplay. And we waited patiently for some new content!

Since the components were not final, we will reserve full judgment and a review until the project delivers, but we can give you an overview of what we played, and we’ve got a video showing you all the juicy content.

Fans of Lockup will be familiar with the 3D perspective main board, depicting all of the different parts of the prison that players will compete with their ‘gang’ tokens. Breakout does not add anything to the main board, but it does have plenty to add to the game.

First, there is a new side board that goes on the bottom, showing a system of tunnels in the catacombs beneath the prison. Players will each have a new token to add to the board, a colorful little lantern that will be used to demarcate their progress as they explore the underground.

You’ll have some choices to make as you explore, as in one direction a person can score 15 points just for getting to that spot — but venture on, and you have the opportunity to get more treasure and even get a chance for a bunch more points!

Each player also get a new prisoner token, the Seeker, which is only a “one” in terms of power, but allows you to compete to explore the catacombs using the tunnel tokens that are randomly added to the main game board at the start of the game. The tunnel tokens come in two flavors for gameplay, namely the “single” and “double” tunnel tokens, and all they do is tell you how many spaces you can move along the catacombs board if you successfully take control of that area.

Even though the game has the additional Seeker, players will still only be able to assign six out of the seven crew members. I’ll get to what happens to the last crew member in a second.

Next up, the catacombs board will be sprinkled with loot tokens which give little in game bonuses to the players that explore far enough into the depths. But if it sounds like the catacombs are the only addition to the game, there’s plenty more.

Players will have the opportunity to flesh out the game experience with lots and lots more cards: new items, new goons, new traits, new tomes, and more content for the solo game (including new guard cards). Some of these refer to the catacomb mechanics, but most are just more of what you love about the base game.

Plus, players will find a deck of “Legends” cards in the expansion, which is really intriguing. There will be eighteen cards that will be shuffled and placed face down next to the catacombs board, with the top card revealed at the start of the game.

WHAT WE ARE LOOKING FORWARD TO:

Lockup: A Roll Player Tale was one of those games that was good just the way it was but also was an easy fit for more expansions. Adding more cards to the mix was something we could see as being a fun way to spice up the game, and adding another area to the board with a nice mix of exploration and interaction gives players another route to victory. Plus, the addition of the legend cards gives players a mechanic, similar to Fleet: The Dice Game or Ganz Schon Clever, where players really have to think about which crew member they are NOT using that round, to make sure that they take advantage of — or avoid the consequences of — that particular card.

We are looking forward to the progress of the Kickstarter. As we said, we were provided a version of the game that appeared to be pretty close to final, but of course, it is always interesting to see what elements are added or changed based on backer feedback in the campaign. We only got to play Lockup: Breakout once, but it really was a seamless addition to a great game experience, and I don’t see why we would ever play Lockup without the expansion. Breakout adds just what I want in an expansion for Lockup: more juicy player interaction with the Seekers, more stuff to collet, and a sideboard that is both competitive and creates new strategies for winning.