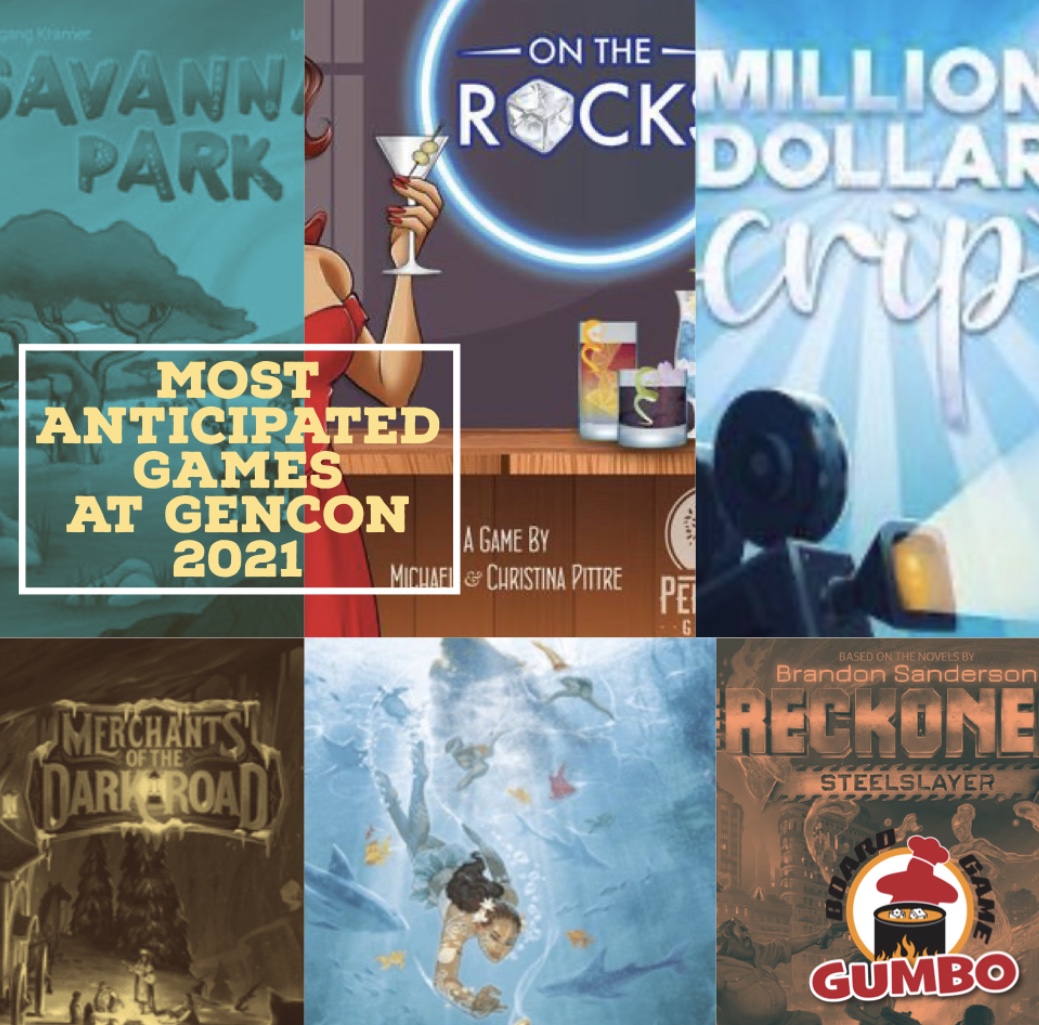 Hey board gamers, Gen Con 2021 is just about a week away. Are you panicking right now, sweat glistening off your palms, heart full of questions about what games to check out at the convention?

The Gumbo has you covered. Here’s our list of games that we’re interested in at this year’s convention. We owe a hearty thank you to the hard working gamers at Board Game Geek who cultivate the Gen Con 2021 Preview list. Without W. Eric Martin and the rest of the team’s hard work, people like us wouldn’t have the time to put together a list like this.

We also need to throw a shout out to our very own Bradly from Board Game Gumbo, who reached out to most of the publishers going to Gen Con (and some not attending) for info on what games are being released and demoed at the con. Check out his awesome video showing off ALL the games coming out at GEN CON 2021 including his most anticipated list of games to play.

After a lot of emails and spreadsheets, we’ve narrowed down the list.

Let’s start with the games I’ve already gotten a chance to play, that I think you might want to try, too.

Dr. Reiner Knizia’s games are ubiquitous on lists of the top euro and abstract games of the last twenty years. I have especially liked playing his smaller games. They appeal to anyone who likes their game experience to have just a few rules, but still squeeze out juicy decisions: Ingenious and Lost Cities are great examples of how one elegant mechanic done well can make for a deep experience. Fast forward to 2021. The crew from 25th Century Games is re-releasing a Knizia classic, Tutankhamun, that will be available for purchase at the con. Players are trying to gain favor with the Egyptian gods by honoring King Tut in his tomb through offerings of goods found down the Nile — otherwise known as set collecting their way down a one-way tile market. We’ve played it already live on the Twitch stream, where we showed off the bright and colorful production. It doesn’t hurt at all that the gameplay is super solid. If you are a fan of Knizia’s abstracts, you should check it out for yourself.

We played Cascadia with Shawn from Flatout Games at our PBM Gen Con Media Mixer back in 2020 (after interviewing Shawn and Molly as it was hitting Kickstarter), and we were enthralled with its breezy play, thinky decisions, and family friendly mechanics. But would the physical copy be as good? Absolutely, and it’s even better in person than on tabletop. Randy Flynn’s games about collecting wildlife habitats in the Pacific Northwest is one of the front runners for my game of the year and should get a nomination for Spiel des Jahres for its ability to attract gamers of any skill and for the gorgeous artwork. The game is super easy to teach, and comes with enough goal cards that there’s always something to explore. For fans of Azul, Sagrada, and Calico, this is a great abstract-y game.

All right, board gamers, time to move on to games we have not yet played yet. If we were going this year, we would have definitely tried to demo (and in some cases purchased) at GEN CON.

Phil Walker-Harding and Blue Orange Games together? Color me intrigued. Walker-Harding has some of our favorite games in the Gumbo, and I always love the production value Blue Orange puts into their games. Neoville has an interesting premise, too. Players build “harmonious cities with nature” in a four by four grid, so fans of tile laying city building games like me are going to sit up and take notice. For me, this would have been a try-before-I-buy, because I want to see how it looks and plays on the table. But I love the time frame, only 45 minutes or so. Neoville looks like a sweet little tile layer, the kind that my wife and I enjoy. Based on what I’ve seen so far, Neoville could be one of the newest one hour wonders for our date nights. (Editor’s note: we have since learned that Blue Orange will not be at Gen Con 2021. I expect Neoville to be in retail shortly thereafter based on company statements).

I’ve really come to appreciate the Kramer and Kiesling connection in games, in part thanks to interviewing Jonny Pac so many times (who is a big fan of the duo), and discussing their games in our Gumbo Live! chats. Every time I play a Kramer / Kiesling game, it somehow ends up in my collection, or on my to-buy list. That history makes me want to check out Savannah Park, from Capstone Games. The theme of building and running a wild animal park is intriguing, in addition to the fact that I’m always a sucker for theme park simulation games. I’m getting a Cascadia-meets-Karuba kind of vibe from the game descriptions, so Savannah Park is definitely something I want to check out.

Nauvoo Games, the maker of our favorite stock trading game ever (Stockpile), published a big box game based on an IP that we love: The Reckoners. A group of scrappy humans have to do pitched battle against other humans with super powers, a twist on the old genre that Brandon Sanderson served up for eager YA (and adult) audiences. I missed out on the original Kickstarter, but hey, Nauvoo has more content coming out, The Reckoners: Steelslayer. Here’s our chance to check out both the original edition as well as the new content, based on the Steelslayer character from the books. If the original and the expansion also escaped your notice when it hit Kickstarter way back when, here’s our chat with Bret Sobol from Nauvoo with a great overview of the system.

I demoed Merchants of the Dark Road at GEN CON 2019 — wow, does that convention seem like eons ago now — and really appreciated how designer Brian Suhre (Freshwater Fly, Coldwater Crown) tries bigger and more expansive themes and mechanics with each outing. As I recall, Merchants of the Dark Road incorporates both a rondel action and pick up and deliver system but with a really unique theme of being merchants willing to bend the rules a little to make a sale. If you have never played any Elf Creek Games’ releases before, then rest assured, this will be an over-the-top production that will look amazing on your table, too.

The Rocketeer: Fate of the Future (Funko Games, Booth 1323)

My family has seen The Rocketeer a billion times, so when Bradly texted me a picture of the cover of this board game, I new it would be something I would have to check out. Is there anyone out there more consistent than Funko / Prospero Hall in melding game mechanisms with IP theming? I think not. The only hiccup here is that The Rocketeer is a two player only game. That’s a not really a problem in my house in terms of playing — my wife and I enjoy two player games, and Watergate is one of my favorite games of the last few years — but wrapping my head around a two player version of this fun movie experience is tough without sitting down to play. It would definitely be one of our planned booth stops if I were going.

Sometimes it takes nothing more than the box cover to catch my eye. That’s the whole idea behind dazzling artwork on the front cover, right? Head Quarter Simulation Game Club, a group of designers at Keio University’s board game club, has designed Khôra: Rise of an Empire, published by Iello. Ancient Greece is the setting, and players are rulers of cities in Greece with minor differences in powers. Over a number of rounds, and after each city is affected by a random event, the players will compete to develop their city better than the others. I’m intrigued by the modular player boards, and I like the action selection mechanic familiar in so many other games but modified here by random dice rolls. This would be one to try before I would buy, as I think I have more questions than answers after watching the reviews that are already out for the game.

Portal Games is known as a company that sells “board games that tell stories”, and yet here we are seeing their first ever party game. I love the theme of Million Dollar Script; pitching movie scripts isn’t that far off from pitching board game ideas to passing players at every convention I have ever worked. The idea of working with your team to make the best motion picture sounds like a lot of fun. It would be a great one to play with my extraverted, outgoing family, many of whom are graduates of improv or actors. This would have been a must buy if I were at the convention, for sure.

Like 87% of gamers in America, I was absolutely surprised and blown away with how much fun I had playing the original Horrified. It’s essentially a tweaked around version of Pandemic, sure, but the differences are both subtle and sublime as you can tell from our chat with Jeremy from Blue Peg, Pink Peg Podcast. Players get to pick their poison — choosing from fun monsters from the black and white era of Hollywood, and scale up the danger as much as you can handle. So, when we saw that Horrified was getting even more fun monsters, this time the American cryptid type, I knew this would be a game I would circle for myself to visit the booth and play. It would probably not be a must buy, but if I liked the gameplay enough after a visit with the folks at Ravensburger, there’s a chance a copy would come back home with me from Indy.

Oh baby! Unmatched has rocketed up to the top of my two player games. We attended the Restoration Games pre-gen press presentation, and seeing the new heroes for Volume Two of the Battle of Legends set got us juiced up to play. Can anything top the Cobble & Fog set? Who knows and who cares, because more Unmatched is always a good thing. I had every intention of bringing home a copy of Volume Two if there were any left at the con. Plus, it gives me one more chance to lobby Justin D. Jacobsen about a Cheers v. Gary’s Old Towne Tavern set! (Editor’s note: due to shipping logistics, copies of Volume Two will not be sold at Gen Con).

I saw the original announcement of Dive from publisher, Sit Down! Games so long ago I cannot even remember how it came across our sonar — err — radar. The idea seemed out of this world — 36 transparent ocean cards stacked on top of each other, creating a depth similar to staring down at a crystal blue ocean. Joining push your luck mechanics with gorgeous production, Dive looks like an innovative game if nothing else. Throw in a tiny bit of programming, and this game is tapping all of the things that intrigue me. I just love the idea of this game, but frankly, can they really pull it off? I am hoping Bradly can find out if there are demos available at the convention. (Editor’s Note: it appears that Sit Down! Games is not attending GEN CON in 2021).

What games are you excited to play? Or even buy? Let us know in the comments below or hit us up on Facebook or Twitter — @boardgamegumbo