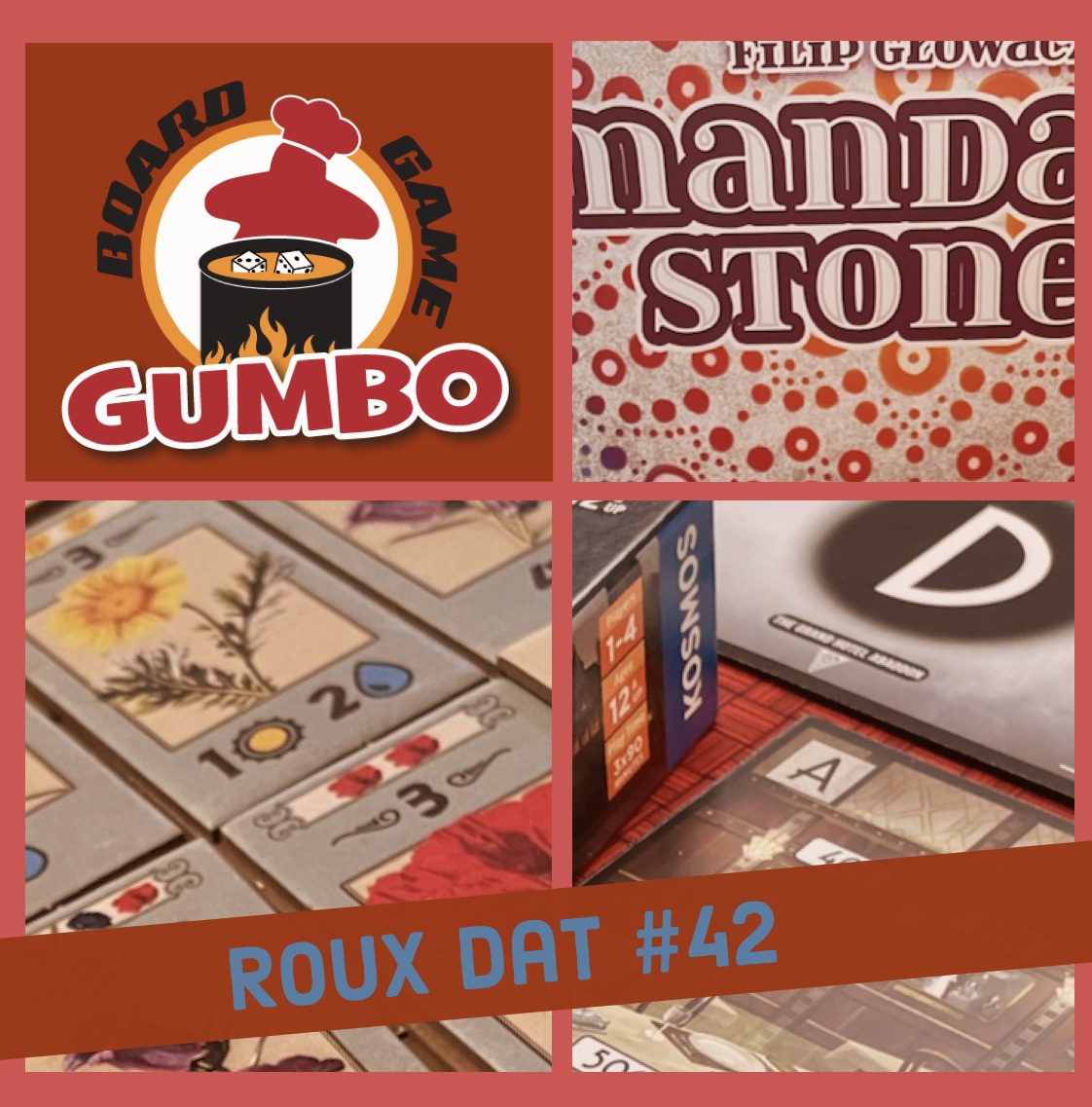 Hey board gamers, BJ from Board Game Gumbo here back with more tales of gaming down on the bayou. Hit us up on Twitter or on Facebook and let us know what games you’ve been playing and what games you think we should play!

But that’s enough blather, let’s get to the games!

This time, we are looking at Mandala Stones, Gartenbau, and Adventure Games: The Grand Hotel Abaddon!

Over a year ago, I was introduced to Filip Glowacz’s Mandala Stones, what looked like a beautiful abstract that would fit right into my wheelhouse. It was simple to learn, could be played in far less than an hour, and had thinky decisions that rewarded both strategy and tactical play.

I promised myself I would get my hand’s on a physical copy. Passing by my FLGS last week, I spied a whole section of Boards & Dice Games, a new line for our store. Scanning the titles, I quickly grabbed Mandala Stones and played it that day!

Mandala Stones is easy to explain. Players will take turns moving an “architect” around a board that is filled to the brim with colorful round “stones” — think those clickety-clickatey tiles from Azul. Each architect has one of two symbols on it, and players can pick up all of the stones around that architect that match the symbol AND do not have any other architect touching the stack. Next, players will place the whole stack of stones on the player board, and on later turns, remove the stones to score points and potentially trigger the end game.

Sounds easy? Like any classic abstract, it is…but the implementation of the game has multi-layered reveals. Since towers on your board only score if they have the same colored tile on top, and you have to pick up the right tiles using the right architect to trigger that stack, each turns feels weighty while also allowing you to play turns or two ahead. In fact, the best feeling in the world in this game is when you move an architect to get a stack of stones knowing that you can hopefully move another architect on your next turn to double or triple score your board. Doesn’t happen often enough for me yet, but when it does…it is so sweet.

On this particular play, I finally got to try out a two player game. I was hoping for a tight experience, fraught with back and forth scoring that left the winner in doubt until the end, and Mandala Stones delivered. Jerod and I were both familiar with the mechanics from having played a three player game last fall, so it was easy to dive in. We both ignored our objective cards, accidentally, but started working on them toward the end. The end result was a five point spread that had me carry the day, but I can already tell that I played with him and our wives, I would probably be fighting for third most of the time!

ROUX DAT SAYS: This was one of my most anticipated games last year, and for some reason, my local store took a long time in getting copies. That’s okay, sometimes the anticipation and ultimate delivery make it all worthwhile. I am so pleased with how much the Tabletopia implementation carried through to the game that ended up on the table top. Not surprisingly, this game is even BETTER on the table than it is online. What else can I say? Mandala Stones has the perfect game length, perfect weight, and just enough player interaction that it will make a fantastic edition to our date night and game night lineup.

The joys of the expanding hobby these past years have been all of the cool themes that have appeared. Tired of zombies, Cthulu, and sci-fi baddies? What about dog walking, bird watching, and gardening instead? Gartenbau hops on that trend, but it isn’t just jumping on the nature genre without a good reason.

Gartenbau is a 2022 release heading to Kickstarter soon designed by David Abelson and Alex Johns. It’s published by 25th Century Games, who has built a well-deserved reputation of putting 150% into the production of solidly designed games. Does Gartenbau follow that trend?

Yep, it sure does. We actually got a chance to play the prototype version courtesy of the publisher on Twitch last week (video should be posted on YouTube soon.) Even in prototype form, the game looked awesome on the table. But how does it play? Players are building a 3D tile garden, starting with seedlings that they pull from a rondel of colors, followed by plants that match the colors of seedlings that they get, and finally, replacing some of these plants with beautiful flowers.

Knowing when and where to upgrade your seedlings and plants is the heart of this game. Plants and flowers both score points, the former by the points on the exposed tile and the flowers through special scoring rules. Some of the flowers are easy — a straight 20 points for losing six points of plants. But some of them are very tricky and benefit from tactical play and a little bit of luck.

ROUX DAT SAYS: As evidenced by our original review of New York 1901 six years ago, we’ve been playing and loving tile laying games for years. Gartenbau is smartly designed and has a breezy pace of play that means it always feels like “it’s your turn.” Based on what I’ve seen in the Kickstarter project preview, this is going to be something that will look amazing on your table and stay in your collection for years as it definitely rewards multiple plays. I’ve played it at two players and at four players, and my only regret so far is that I haven’t had time to teach my wife. I think this will be right up her alley.

Board gamers face a bewildering amount of choices if they like puzzly escape room games. You could geaux all out with the games that force you to rip up the pieces in order to solve the puzzle. Or, you can play smaller, bite-sized card based games that can take a half-an-hour and can be resettable at will.

The folks at KOSMOS have been stepping it up a bit, courtesy of famed designers Matthew Dunstan, Phil Walker-Harding, and Ute Wielandt. The next installment of the Adventure Games series from Dunstan and Walker-Harding arrived, and it’s called The Grand Hotel Abaddon. (Our thanks to KOSMOS for sending us the review copy.) This is a 2020 release that is just making it around to some retail outlets, and we got to play Chapter 1 of three chapters on the Twitch channel this past weekend.

In the Adventure Games series, players will again be tasked to use a deck of cards to solve some kind of mystery, but the game throws a few little wrinkles that make it stand out from the crowd. First, these are longer experiences — so far, I have two hours into the first and second part of a three part campaign to solve the riddles behind the mysterious experiences in the hotel. These are interlocking and sometimes meaty puzzles. Second, the game isn’t just cards, players have standees to control and move about the card based map, there are items to get and use and keep and lose. In this version, a stand out element is NPCs that roam the hotel that you need to interact with to solve the mysteries.

It’s tough to talk about our experience without spoiling. If you want to see how it plays, we will be posting the SOLO playthrough on the YouTube channel soon. I’ll say this — the puzzles were pretty Goldilocks to me, not to hard, not to easy to make it simple to get through to the end. Instead, there were some genuine Eureka! moments when the combination of our investigation, sleuthing skills, and yes, timely hints from the hint book helped us glide through the hotel picking up clues.

One more thing. At least to my experience, this was my first time interacting with moving NPCs and having a backstory for my characters that made sense, especially from some of the thematic elements that were included. (Yes, I have to be intentionally obtuse here!) I’d like to see this mechanism continue to evolve in future installments, as it really brought the characters to life.

ROUX DAT SAYS: I can definitely recommend Adventure Games series to puzzle game lovers. If you are good at solving mysteries, or enjoy playing the Exit or Unlock or Deckscape series, you’ll find a lot to like in this game. I’m pretty sure, though, that you should be a fan before trying the series. The puzzles are not necessarily beefier than other escape room games — in fact, they really aren’t — but the fact that players need to roam around, explore tableaus, and discover the clues is going to frustrate some players. Not me. I like the “choose your own adventure” style system a lot, and I especially like the theme of this story and its implementation much better than the first one we played.