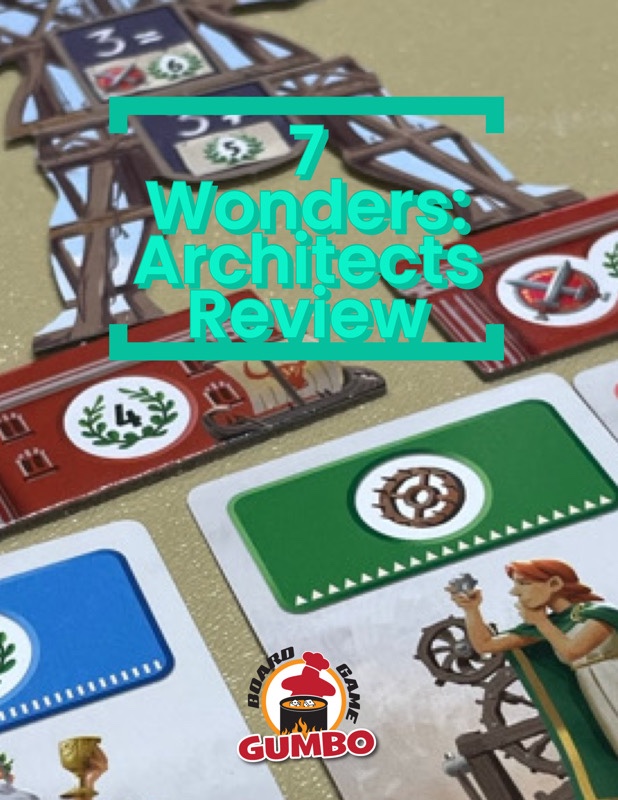 Maybe I should start at the beginning, so you don’t just have to trust me.

The original 7 Wonders by Antoine Bauza swept the board gaming world by storm. I remember when it came out. EVERYONE was talking about it. Some said it was the perfect introductory civ game, and gamers everywhere ate up the pick-and-pass scoring mechanic. And then Bauza blew people’s minds by publishing six more expansions. And then 7 Wonders: Duel came out, and some reviewers credibly said it was better than the original.

7 Wonders, the system, is amazing. It’s a game about playing the cards, playing the odds, AND playing your opponents all in a tight window of thirty to six minutes depending on how many expansions you throw in.

But there was one thing missing.

The game may have been advertised as a nice family weight game, and an intro to the multiple genres it touched upon, but it pretty much failed in that regard for most game groups. Sushi Go was so much better at teaching the pick-and-pass mechanic. Lots of games did engine building easier for new gamers. I had some family members who could just never keep the green scoring and economy straight, game after game.

7 Wonders’s reputation in some quarters as a good welcoming game was ill deserved.

Fast forward to 2021. Antoine Bauza returned to his masterpiece. (Although there are rumors that Architects was never suppoed to be in the 7 Wonders universe, until the publisher convinced him it would be better rethemed to this.) Could Bauza bring a civ style game to everyone?

Yes, and no. Let’s start with the negative. This is not really a civilization game, just like 7 Wonders was barely a civ game, too. Players each start with one of seven different factions all intent on building their version of one of the seven wonders of the world. Rhodes. Olympus.

They are all there, represented by a set of tiles that when placed together reference the wonder under construction. Each piece has certain requirements — perhaps you need to have two cards in your playing space that match the same commodity, and if you complete it, you flip over the piece representing one stage of the wonder being built. You get points for doing that, and maybe even a special bonus.

The civ part is very abstracted, but it is there in a teensy way. Rhodes is all about military, and so you will be looking to add red cards that help you win the frequent battles with your neighbors. But, there’s no tech tree, there’s no real powering up of the civ, there’s no feeling that you are doing anything other than building a wonder. No matter, because building the wonder is the conceit of the game.

That out of the way, let’s turn to what it does deliver from its promises. This game, unlike the original, is just so dang easy to teach. Once each player has their box – and yes, this is one heck of an overproduced game, as each player gets their own gametray filled with their tokens and their own tuned deck that matches up to their wonder — they set up the wonder face down as the picture on the box shows, shuffle up their deck, and then we are ready to play. You’ll be up and running in seconds.

That’s it. It’s that darn simple. The cards themselves are super easy to understand. Cards give resources that can help you build wonders, including coins which are wild resources. Cards give straight up blue civic points. Cards give military symbols that power you up for direct combat with the neighbors. Or cards give science symbols which don’t have special scoring (like in the base game) but instead collecting them gives access to bonus power cards anyone can get. Those bonus powers are top notch, things like extra military, giving extra wild coins, or extra points for certain scoring tokens, to name a few.

Ah, you’re back with your commentary about luck. I can hear your heavy labored breathing. Look, I get that your strategy is entirely dependent on the cards you pull. But isn’t that true about Bruges? Or Downforce? Who here hasn’t been hosed once or a thousand different times by the roll of the dice in The Castles of Burgundy? Yes, the cards that you see (and the one behind the face down deck) are random, but what you do to mitigate or even take advantage of that randomness is the key.

Rush the green symbols and upgrade your character. Rush your monument by grabbing resources and coins every single turn. Get a military advantage and then press the battle every time you can. Lean into your civ’s strengths and focus on the cards that complement your civ, or even more daring, move away from its strength by getting cards that help a different strategy that other players are leaving for you to take.

There is a counter intuitive thing about this game I have to detail. This game absolutely rewards multiple plays, especially with the same group, each player switching out civs and discovering the different strategies each one recommends. It’s almost like … like … that’s the game. This is a thirty minute game that is not meant to be played once. Play it over and over and you will see what we see. The good players learn to outwit the randomness of the decks. Sure, luck will play a part in a game or three. But time after time, play after play, there is more to this game than just the flip of the card.

7 Wonders Architect is smooth, fast, engaging, and eminently replayable. It’s another masterpiece from Bauza and one of our favorite games of 2021.