The rhythm and cadence of language fascinates me. Growing up in south Louisiana has given me a front seat to a culture full of musical expressions for every day greetings and happenings. We worship idioms, both in French and English.

We say “How’s your maw-maw” or “comment les affaires” to say hello to neighbors on the street. We wink and say “on va se revoir (we’ll see you again)” when we bid good-bye to strangers we’ve just met. Our Cajun raconteurs are famous for their quick minds and ability to connect scraps of a conversation to an old story or joke.

Maybe that’s why I love word games. I remember long ago Saturday nights watching my mom play Scrabble for hours in the kitchen with her friends, or hearing my dad roar with laughter at a funny definition in Balderdash. We played Hangman at school during recess, and played hours and hours of Boggle with my family. As an adult, I bought a copy of Runes off of eBay, and loved competing with my wife to find words that fit the symbols on our boards.

I just love that moment in a game when someone makes a clever connection between random letters and an unusual word. There is an indescribable feeling when you combo letters into a word so unique to your group that everyone nods, a silent look of “well played” on their faces.

How does this feeling best translate to cardboard? I have been searching for that answer myself for years, and I think I have finally found the perfect expression of that desire.

Gil Hova of Formal Ferret Games, sent me a prototype review copy of Wordsy, a streamlined version of his original word game, Prolix. (Note: I have not played the original game, just this implementation. ) Gil is the designer of Bad Medicine and the blisteringly hot title from Gen Con and Essen 2016, The Networks, which sadly is still on my list of games to play this year.

So, slide into a comfortable chair, grab yourself a steaming cup of Community coffee (Cafe’ Special, of course) and a plate of fried powdery goodness, and let’s chat about this tight, fun, and challenging word game that hits Kickstarter this fall.

Wordsy is a word game for one to six players that uses a card system instead of tiles or dice to generate random letters. The game is competitive and is played over seven rounds, lasting about twenty minutes total. In each round, a two by four grid of consonants is formed in the middle of all of the players, with each two letter row given a successive number value from 2 to 5. During each round, players write down a word that uses as many of these letters as possible, and can score bonuses depending on the letter used and the time it takes to write down the word. Whoever scores the most points in seven rounds is declared the winner. 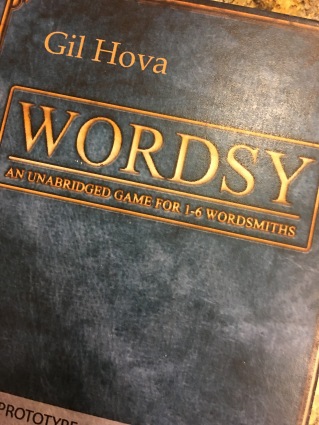 The version we received is in prototype form, but I did enjoy the graphical choices even in somewhat raw form. Wordsy comes in a small box, that looks like an old leather bound folio. The game consists of a large stack of cards each with a different letter on it, some with colors and numbers to donate their rarity and bonus point potential. It also comes with a sand timer, and plenty enough scoring sheets for you and all of your word-loving friends. Finally, it has four scoring column cards each with a different point value. The prototype version shown in these pictures is what was sent to me, but my understanding is that the cards are not representative of all of the final graphical choices.

Each round, players study the eight letters on the board at the same time. The first player to think up a word and write it down can grab the 30 second timer. That puts all the other players on the clock to come up with a word. When time runs out, the person who grabbed the timer scores his or her word first, and gets bonus points if he or she can beat at least half of the other players. Of course, the slower players also get a bonus if they beat the first player.

Once the seven rounds are done, players score their best five words plus any bonuses. The player with the most points is declared the winner. In short, Wordsy is simple, intuitive, and easy to teach.

I have played this game already half a dozen times, both one on one and in a group of three or four other players. I even brought it out with some non-gamers, just to test its accessibility.  The non-gamers picked up the concept of the game during the very first round, and said they were intrigued by the challenge of coming up with words “out of thin air” (as they said). They’ve seen many of my other board games, and were half-expecting a two hour long Euro game with lots of pieces (not something they are interested in at all), and were happy to see the minimalist construction of this game.  Both non-gamers gave Wordsy two thumbs up.

I also introduced it to some of the Krewe, who are of course very familiar with games like Biblios and Boggle. The Gumbo guys thought Wordsy played fast but challenging, and much preferred it to other word type games. The game is light weight, but has some gamer touches (scoring, bonuses, timer, and first player challenges) that gave a deeper level of strategy than your standard word game.

How did I enjoy my plays? I love how Gil has put some cayenne into what could have been a standard fare race-to-make-the-biggest-word game. I love three of the many hooks he added to Wordsy:

The good hook? Different consonants are worth different points depending upon how rare the letter is in normal English words, and what column they are in.

The better hook? Two columns of letters slide down each round to lower value columns, and the higher values columns are replaced by new letters, so each round the board changes

The best hook? Players can use literally any letter they want in the alphabet to make up the word for each round — that’s right, any letter, not just the ones on the current board. The trick is that a player only scores the letters that are actually on the board.

This turns Wordsy into my favorite kind of genre, in addition to being a word game: It’s really a sandbox word game, where you are not limited to what is in front of you on your turn. Instead, the world is your board! Any letter in the English language is there for you to call it down from the aether onto your scoresheet. That’s real word game freedom.

I have played Boggle hundreds of times, and the limited number of letters on the board is what drove me crazy about that game. I could never stand being limited to the grid of letters that randomly popped out of the dice. I always wanted a word game that added a little spice to the standard format.

Wordsy gives me the freedom to dream big. The outlay provided by the cards is only a starting point. It’s an invitation to search my memory banks for words that fit the pattern of the letters on the board. It is definitely a step up in fun and challenge from Boggle and Scrabble and other games that limit your choices, and the addition of the timed bonuses really adds some punch to the experience.

Challenge yourself. Invite a few wordsmiths in your area to sit down for beignets and coffee, and break out a copy of Wordsy after it comes out on Kickstarter this fall. If you like word games, or if you like challenging filler games that have some meat on the bones, you will definitely like Wordsy. It’s quick, it’s easy to teach, it’s challenging, and most of all, it is deliciously fun!