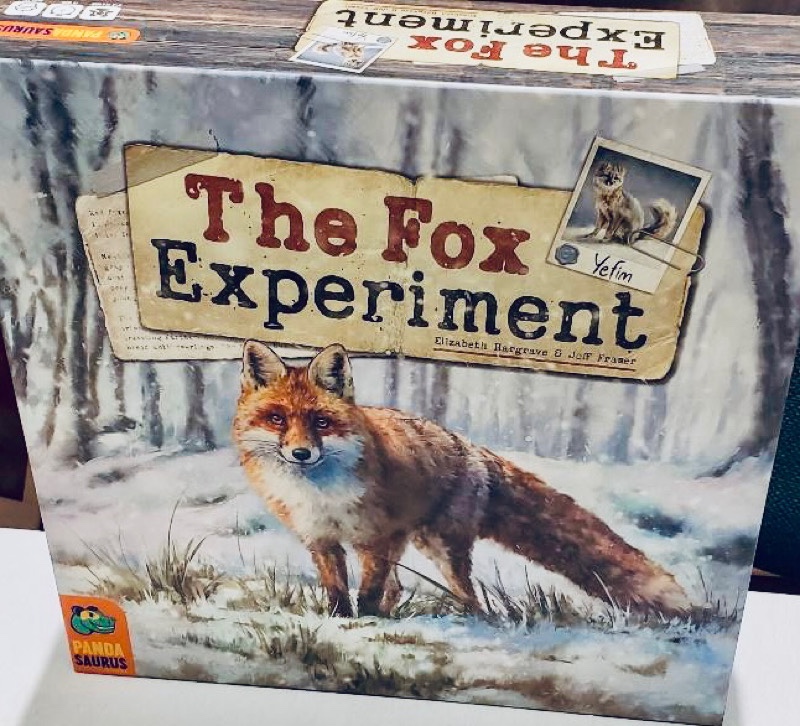 Bradly’s back from GEN CON with a multi-part blog of some of the highlights of this year’s convention. If you missed it, check out his first entry: An Expected Journey (Gencon 2022) – Part 1: Intro and Top Fives, where Bradly gives you the top five games he considered buying at GEN CON, plus the top five games that he demoed.

Through a combination of familiar mechanics that emphasized combo-y play, beautiful artwork, and excellent production quality, it was an instant hit. The game has since spawned multiple expansions, a host of awards, and is currently ranked 24th overall on BoardGameGeek. So when the newest game from Elizabeth Hargrave, The Fox Experiment, was announced and available for demo at Gencon, I immediately signed up.

Before we get into the detailed rules of the game, please do keep in mind that this was a pre-production copy of the game.  If you are interested, The Fox Experiment should be launching on Kickstarter in mid-September.  Rules and components may change; either from now until the launch or even after the Kickstarter is completed.

I have also seen some other content already up on the game where the rules were slightly different from what I was taught.  The rulebook for The Fox Experiment is clearly still a work in progress.  However, what I did see was a very polished game that left me with only a few concerns, which could easily be ironed out in the development time remaining.

A game of The Fox Experiment is played over the course of 5 rounds, with each round having 3 phases. Players are all trying to score the most victory points in that time, which can be amassed in a number of different ways.

At its heart, I would call The Fox Experiment a resource allocation game, since you are taking resources granted to you by the Foxes you draft in Phase 1 and applying them to the fox pups you are breeding in Phase 2. Those pups then fold back into the pool of foxes to draft for the next round, giving you resources again. Of course you’re not guaranteed to get your own pup back from the draft pool, so player turn order is vital. There are a number of mechanics at play here, but they all mesh together well in an overall enjoyable experience.

At the start of each game of The Fox Experiment, players are dealt a single objective card.  Objective cards can score you points at the end of the game, up to 10 each, and require that specific resources be assigned to one of your pups at some point during play.  There are 4 different colored resources in the game, and the objective cards give you a good starting point on which ones to focus on.  You can also acquire more objective cards during the course of the game, potentially accumulating a fair number of victory points.  You are also given a single ‘Wild’ die, which you can use in combination with the other dice to create pips and therefore resources.

Phase 1 begins with each player drafting 2 parent foxes, as well as determining their player order for the next turn.  This can be done in any sequence the player chooses, with some players prioritizing specific foxes for the resources they provide, and others wanting a higher player order.  Going first is obviously great for the draft portion of each round, but players who choose another turn order will get random bonuses.  Phase 1 continues until each player has selected a player order, and has drafted exactly one male and one female fox to be their parent pair for the round.

Your parent foxes will determine the resources you have access to in Phase 2.  Starting foxes, those not created through breeding by players, only provide dice (boxes) while pups who are bred by players and become available on later rounds can also provide resources (circles).  The only difference being that resources can be used to upgrade a player’s personal board while dice can only be allocated to improving future pups.

Phase 2 begins with each player randomly drawing a pup from their deck.  These cards are either male or female, but otherwise identical mechanically to each other players’ deck.  (The artwork was different for each deck: my deck was made up of red foxes, while another player’s consisted of arctic foxes.)  You will roll the dice provided by the parents you drafted and then assign those values to the pup you have drawn for the round.

The dice are a bit unique in The Fox Experiment because they can be blanks, or provide a single resource (pip), or provide only half a resource.  You can match similarly colored dice together to make whole resources, or use the Wild dice that are provided to do so as well.  This is also when you would meet the requirements of your Objective cards, and if so denote it by placing one of the very adorable fox meeples on it.  Here you can also earn more victory points by maxing out a row of one of the 4 characteristics of your pup.  You will then place any pups that have been bred for the round back into the market.  These pups will become available during the next round for drafting, allowing players earlier in the player order to potentially benefit from all of your hard work.

The last thing you will do in Phase 2 is assign resources to your personal lab board.  This actually has a lot of functionality in the game, and is a great way to get extra resources or unlock additional scoring.  The 4 rows on your lab board from top to bottom are; drawing additional pups at the start of Phase 2, drawing additional Objective cards, gaining extra Wild Dice during the rolling phase, and unlocking Sponsors.

Sponsors are maybe the most impactful part of the Lab board, and are a key way to score additional points at the end of the game.  Each sponsor is looking for you to accomplish certain tasks, whether it be spending a particular type of resource or having the friendliest foxes each round.  Each time you accomplish their task you will score more points, but there is also a one-time bonus simply for unlocking them.  You’ll notice that there are three spaces to unlock Sponsors on the lab board, but there are 4 sponsors in each game.  You will have to decide which ones play best to your strategy.

Phase 3 is mostly a cleanup phase.  You will first determine who has the friendliest fox simply by counting up the resources you assigned to each pup in the round.  Whoever has the highest number will get extra victory points (all ties are friendly in the game, so tied players share the points).  Whoever has the least friendliest fox will get a small bonus in a wild die resource, which is essentially worth half a pip on any die.  You’ll reset the turn order for the next round (to be drafted in phase 1 again), refresh the supply track, and fill the remaining spots in the market with wild foxes.  Then you’ll start back at Phase 1 with drafting foxes, now including the pups you have created in this round, and player order.

There are some other aspects of the game not covered, like power cards.  These are one time effects you can gain over the course of the game and spend as you choose.  They include things like rerolling dice, or being able to keep your pup instead of sending it back to the market to be drafted.

There is a lot to like about The Fox Experiment, and in some ways it reminds me of Wingspan.  The mechanics of the game are nothing completely new, but they are combined in a way that is very streamlined and enjoyable.  A single round is more than enough time to grasp the fundamentals of the game, but there is also enough replayability through Sponsors, random bonus tokens, and power cards to keep subsequent plays fresh.  Of course, the most memorable aspect of the game are the dry erase cards you use to breed your pups each turn.  I wish there was some variability in those cards so it was more than just drawing a male or female pup, but maybe that’s something they will consider going forward.

Although familiar in many ways, there are some interesting mechanics developed into The Fox Experiment.  Losing your pup each round, and sending it back to the market to potentially be drafted by your opponents, is entertaining and creates a difficult decision for the players about just how many resources they want to allocate to a card they may not get to keep.  It makes the first player token extremely valuable, but those extra resources you get from selecting farther back in the turn order are not easily attainable, especially early in the game.  A single resource in the first or second round may be the difference between being able to upgrade your lab board or not, and that can have a far-reaching influence on the game.  Unlocking a sponsor gives you an immediate bonus, a power card, and additional scoring at the end of the game, but are sorely expensive.

All of these difficult decisions are waiting for you in the very first round of The Fox Experiment, and the tension only ramps up each round.  With only 5 rounds to play, there is little time to relax and enjoy the progress you’ve made, but you do feel a real sense of accomplishment when your fox is the friendliest of the round.  Maybe you just rolled better than everyone else at the table, but being able to put out your fox meeple on that victory spot feels good, and seeing everyone look at your fox with envy in the next round as it gets drafted immediately is both a proud and sorrowful moment.

I really enjoyed my time playing The Fox Experiment, and it is definitely one I will be watching for when it launches on Kickstarter sometime in September.  I don’t know if anything can match up to the wild popularity that Wingspan garnered at its launch, but I will say that this seems like a very worthy successor from designer Elizabeth Hargrave.